Every day Tennis Majors takes you back in time to celebrate a great moment in tennis history. Today we go back to 2012 to relive Roger Federer and Juan Martin del Potro’s epic semi-final at the 2012 Olympic Games 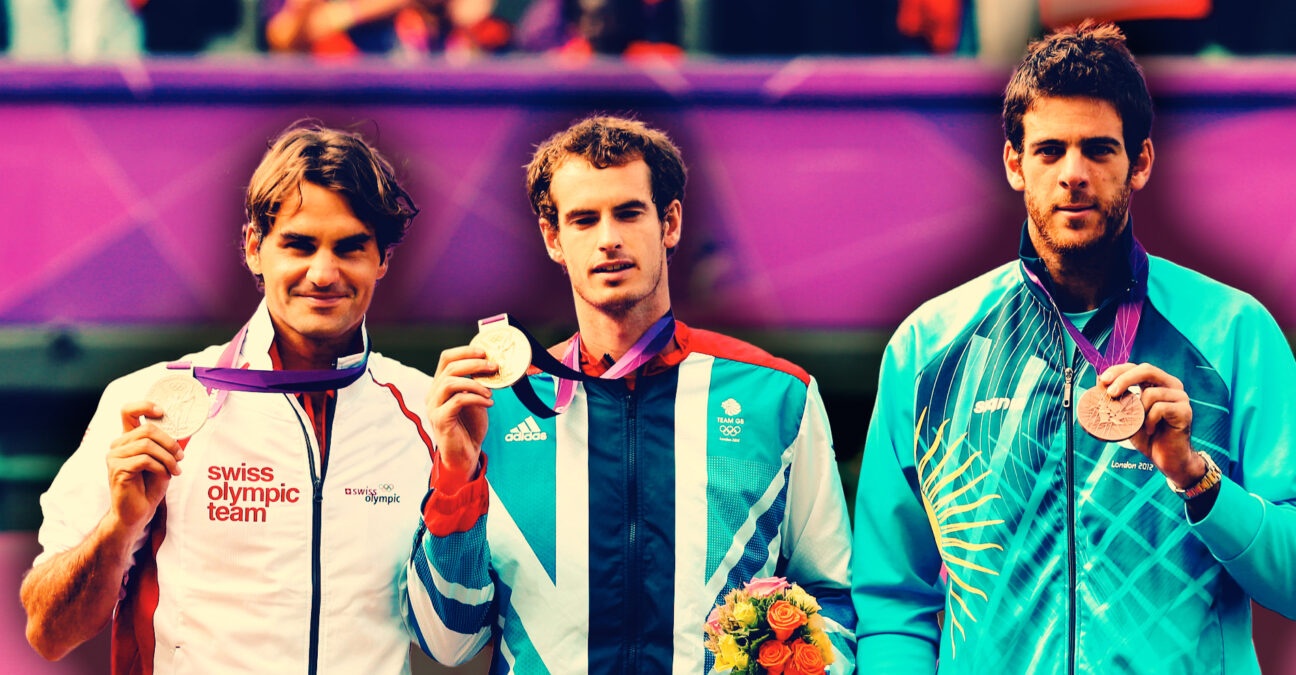 On this day, August 3 in 2012, in the semi-finals of the London Olympics, Roger Federer edged Juan Martin del Potro (3-6, 7-6, 19-17) after four hours and 26 minutes of play, in the longest three-set singles men’s match in the Open era. Thanks to this win, Federer, who had just reclaimed the world No 1 ranking, reached another major final in London, less than a month after having triumphed at Wimbledon.

In August 2012, Roger Federer born in 1981, had just reclaimed the world No 1 ranking for the first time in three years. The Swiss maestro had dominated the game spectacularly in the 2000s, especially between 2004 and 2008, conquering 12 Grand Slam titles before Rafael Nadal challenged him for the world No 1 ranking.

In 2011, it was Novak Djokovic who overcame Federer and Nadal to become the best player in the world. Federer, who had claimed 16 Grand Slam titles between 2003 and 2010, had not lifted a major trophy since the 2010 Australian Open, two-and-a-half years earlier. In the nine previous Grand Slams, he had reached the final only once, at Roland-Garros, and was stopped five times in the semi-finals. Nadal had beaten him twice, and Djokovic four times during this stretch. It was not long before journalists started once again speculating about Federer’s decline, although there were still only two players in the world who were better than him. However, the Swiss, after an unexpected triumph at the Madrid Masters, returned to the top at Wimbledon, where, after escaping a five-set thriller in the third round against Julien Benneteau, he defeated the crowd favourite, Andy Murray, to claim a 17th Grand Slam title and become world No 1 again.

Juan Martin del Potro, nicknamed “the Tower of Tandil” (he was 6ft 6in), was born in 1988. He turned professional in 2005, and by 2006, he was already the youngest player to finish the year in the top 100 (No 91). In 2007, the Argentine climbed as high as world No 47, after reaching the third round at the US Open (lost to Djokovic, 6-1, 6-3, 6-4). His breakthrough year came in 2008. That year, in the summer, not only did he claim his first title, but he also became the first player in tennis history to win first four titles in four consecutive tournaments, lifting the trophies in Stuttgart, Kitzbuhel, Los Angeles and Washington. He later reached the US Open quarter-finals, where he was eliminated by Andy Murray (7-6, 7-6, 4-6, 7-5).

del Potro achieved his greatest feat at the 2009 US Open, where he claimed his first and only Grand Slam title, defeating the five-time defending champion Roger Federer in the final (3-6, 7-6, 4-6, 7-6, 6-2). Runner-up at the Masters Cup a few months later (lost to Nikolay Davydenko, 6-3, 6-4), the Argentine reached the world No 4 position at the start of 2010, but a wrist injury plagued his entire season. After struggling to get back to the top in 2011, his level of play significantly improved in 2012, as he reached the quarter-finals at both the Australian Open and Roland-Garros.

The venue: The London Olympics being held at Wimbledon

Less than a month after Wimbledon, the 2012 Olympic Games were held at the All England Lawn Tennis and Croquet Club. Considered by many as the most intimidating court in the world, with its famous Rudyard Kipling quote above the entrance (“If you can meet with triumph and disaster and treat those two impostors just the same”), the Centre Court has seen the best players of all time competing for the title there.

The facts: A tense Federer holds his nerve for the win

Although it would have been hard to believe 12 months ago, Roger Federer was the favourite at the 2012 Olympic Games in London. The Swiss had just climbed back to the world No 1 spot for the first time since the summer of 2009, after adding a 17th Grand Slam title to his list of achievements. That last title, claimed on the grass courts at Wimbledon after back-to-back wins over Djokovic (6-3, 3-6, 6-4, 6-3) and crowd favourite Andy Murray (4-6, 7-5, 6-3, 6-4) made Federer the logical favourite for the Olympic Games, especially in the absence of Rafael Nadal, who had pulled out due to injury.

Apart from one set dropped against Alejandro Falla in the first round, Federer reached the Olympic semi-finals without much difficulty. There, he faced Juan Martin del Potro, the Tower of Tandil, the man who had famously put an end to his reign at the US Open in 2009. However, since then, del Potro’s career had been hampered by injuries, and Federer had already defeated him five times in 2012; though their match at Roland-Garros did extend to five sets (3-6, 6-7, 6-2, 6-0, 6-3).

In the first set, which he won 6-3, the Argentine dominated the game with his powerful groundstrokes and massive serve. Federer managed to take the second set, 7-6, but if he thought he was out of trouble at that stage, he was wrong. With no deciding set tiebreak, both players held on to their serve for more than two hours, and Federer served to survive no less than 12 times before he finally broke his opponent’s serve to win the longest three-set men’s match in the Open era.

“I was very tense at certain times,” Federer said, according to ESPN.com. “I was seeing myself as a loser many times during the match.”

“Juan Martín did so well to hang in there,” the Swiss also said, according to The Guardian. “I don’t think I have ever played as long a set in a best of three-set match. It was very physical at the end and so mental. I feel horrible for Juan Martín, but he can be very proud.”

Of course, the Argentine, who burst into tears after having missed his last backhand, was devastated. “To lose this way hurts a lot,” he said. “It’s very hard to talk about it right now. Everyone has their time. The US Open was my time, not today.”

What next? Murray would avenge his Wimbledon loss in the Olympic final

Roger Federer would not win the gold medal at the 2012 London Olympics, as Andy Murray would take avenge his loss in the Wimbledon final, delivering a great performance to stun the Swiss, 6-2, 6-1, 6-4. Meanwhile, del Potro would find comfort by obtaining the bronze medal after he defeated Novak Djokovic (7-5, 6-4).

Federer would miss the 2016 Olympics due to a career-threatening injury, and in 2021, he would once again make the decision to skip the event. As a result, the only Olympic gold medal claimed by the Swiss as of date would remain the one he had obtained in doubles at the 2008 Beijing Games with Stan Wawrinka.