Words of a stringer: “It could shake things up”

Benoît Mauguin is used to working on the best racquets in the world. With the health emergency, his job came to a standstill. Here he explains how he’s been adjusting and what could be the consequences when the Tour resumes. 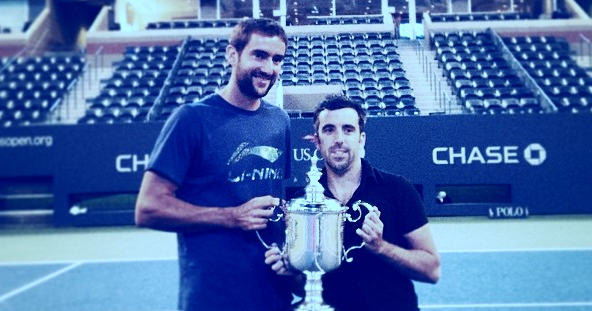 The French stringer Benoît Mauguin is used to working on the best racquets in the world. Among his clients, one can find Gaël Monfils, Felix Auger-Aliassime, Jelena Ostapenko, Pierre-Hugues Herbert, Samantha Stosur and Jo-Wilfried Tsonga. Maria Sharapova was also on this list until her recent retirement. With the health emergency, his job as a stringer came to a standstill overnight. Here he explains how he’s been adjusting to the circumstances and what could be the consequences when the time will come for tennis to get going again.

How do you get through this mandatory tennis break, financially?
I have contracts, but no standard ones. I leave the possibility to the players either to pay everything in January, or to pay at several times through the season. So generally I start the year with a good amount of money, which allows me to book and anticipate all the trips. Right now, I can keep waiting without too much worry. And also I work with players who are not in financial difficulty: it is easier to stand united when you are well established in the top 20 or the top 10.

Have you found them to be rather understanding?
They understand yes and, in fact, I didn’t have much discussion with them about it. I have worked with most of these players for several years now, and they know that my situation is less comfortable than theirs. As soon as we have a little more clarity about the rest of the season, we will tackle this problem of how to invoice from now on to catch up on the situation. We will talk about the new organisation, the tests of the material, the possible renegotiations with the sponsors. For the moment, we have mostly been hearing each other’s news.

It’s good to be able to rely on such serenity during these challenging times…
I had long talks with a few veterans of the Tour back in the day and I understood that I had to find a way to secure myself because even with a contract the players are strong enough financially to make the procedures last and then opt out. So I decided to anticipate as many payments as possible. Whatever happens, I have the cash needed to work through the whole season. I book everything in advance so it makes a less expensive bill in the end: everyone wins. Besides, I don’t think anyone has put a pandemic clause in their contract! 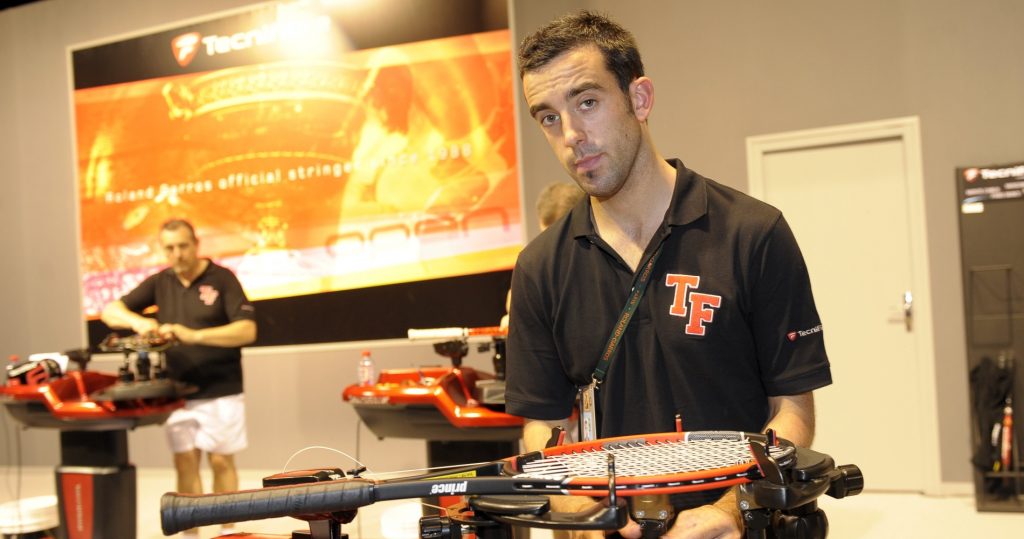 Were you asked to still string a few racquets during the lockdown?
No, I’m at a complete stop. There weren’t many players able to hit anyway. As soon as we know when we resume, some racquets will arrive and I will do series of racquets for training. I also have a racquet-preparation activity, but the supplier’s warehouses are closed so I can’t even anticipate the work on the racquets or the next series. I had no choice but to shut down completely. Same for my store, it also had to close.

It must seem like such a long time of inactivity now: are you dreaming of stringing racquets at night? Time seems long?
It has allowed me to think about something else actually! It’s been 10 years since I’ve been able to take a true break. Anyway, I have no other choice, as I can’t work. I did not believe in a resumption in May for the Tour, but the store will be able to reopen at the same time as the tennis clubs (May 11).

Are you in contact with the other stringers?
There is not really something like an individual stringer, there are only companies like mine. We’re three and we share around 30 players. The other two companies are in the United States, including one in New York so I think it has really stopped there. The rest in Florida can work a little because they still have a stock of racquets. We also have this chance to work with millionaires so if you have to ask them to help us for the following year, it’s always easier. I can’t imagine clients totally turning their backs. I am also fortunate to be supported by the State: we are in a much more comfortable situation here in France.

As a stringer, you are essential to the players, it also helps…
Yes, but it could shake things up. There will be negotiations that will not necessarily be very easy with players who will not necessarily be very accommodating. This is where we will truly see where solidarity lies. Those who will not understand a possible increase in the fees because there is a loss over the year … But I took the luxury of choosing to work with nice players having good values. Greed is one thing, but human values ​​can come before it. For the moment I am not worried but we will have to see under what conditions the resuming of the Tour takes place. If it’s played behind closed doors with very small teams… If the travel restrictions are drastic, with the added risk of being put in quarantine, it will become very complicated.

The Tour has been having a hard time setting up relief funds for the lowest-ranked players. Solidarity, even among players, was not a done deal. Did that surprise you?
The players lack too much unity to be able to impose any change or decision. This is the main thing I notice and I join those who are campaigning for a real and strong union. In order to put the players back in the centre, and in this case there should be enough solidarity to support the players but also those who work for them. And I also have a thought for all of the players who will have to tell their staff that they can no longer afford to pay them. The top 50 can handle the cost of that crisis. The top 100 will have to be careful. But outside the top 100, it will be a disaster. We can’t let this happen. The four Federations which organise the Majors are sitting on piles of gold. In general, the redistribution has to be fairer.