Every day, Tennis Majors looks back at the biggest moments in tennis history. On January 12, 1980, Vitus Gerulaitis came out with one of the most famous lines ever uttered in the sport 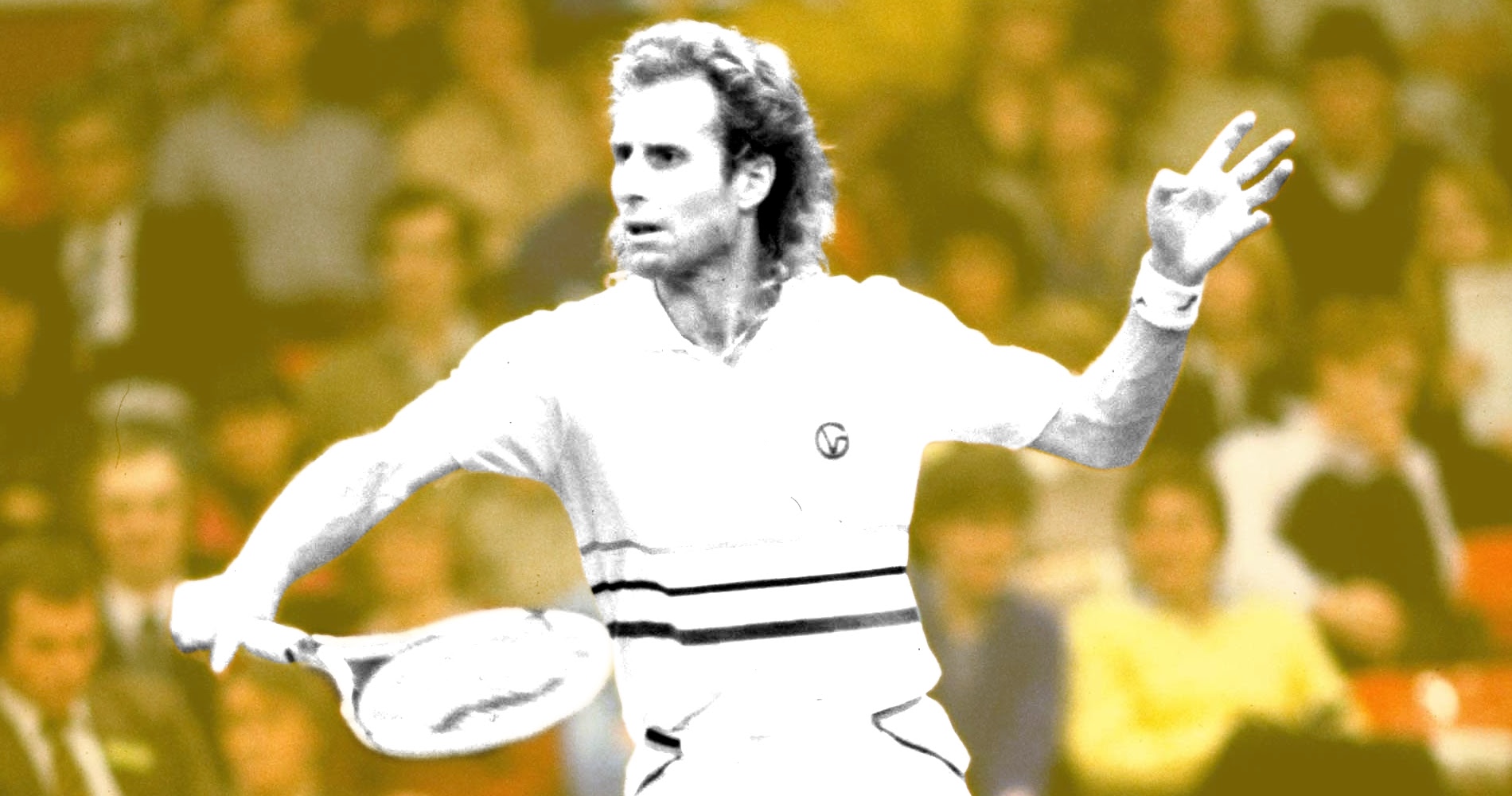 On this day, January 12, 1980, after he defeated Jimmy Connors in the Masters semi-finals (7-5, 6-2), Gerulaitis came up with what would become one of tennis history’s most famous lines: “And let that be a lesson to you all. No one beats Vitas Gerulaitis 17 times in a row.” Indeed, Gerulaitis had lost his 16 previous clashes with the former world No 1. In this match, Connors also showed unusual sportsmanship, by giving away a set point to correct a wrong line call.

Vitas Gerulaitis, born in 1954 in New York, claimed the first of his 15 titles in Vienna, in 1974, defeating Andrew Pattison in the final (6-3, 3-6, 6-4, 6-2). In 1977, he took his career to a next step, winning the most important tournament of his career at the Monte-Carlo Open (defeating Antonio Zugarelli in the final, 6-2, 7-6, 3-6, 7-6). The “Lithuanian Lion” climbed as high as world No 3 in March 1978, after a great 1977 season, where he claimed his first and only Grand Slam title at the Australian Open, defeating John Lloyd in the final (6–3, 7–6, 5–7, 3–6, 6–2). A few months before, he had reached the semi-finals at Wimbledon, defeated by his friend Bjorn Borg in one of the greatest matches in the tournament’s history (6-4, 3-6, 6-3, 3-6, 8-6). Gerulaitis finished runner-up to John McEnroe at the 1979 US Open (7-5, 6-3, 6-3). The American was famous for his off-court personality. According to The Independent, “nobody contributed more to making tennis the coolest sport in town. “Broadway Vitas”, the ultimate tennis playboy, dated actresses and models, played in a rock band, partied till the small hour.” Gerulaitis was also known for his sense of humour; in 1977, prior to his first Grand Slam title, he had declared that if he “could be as successful on the tennis court as [he was] off it, [he would] be number one”. 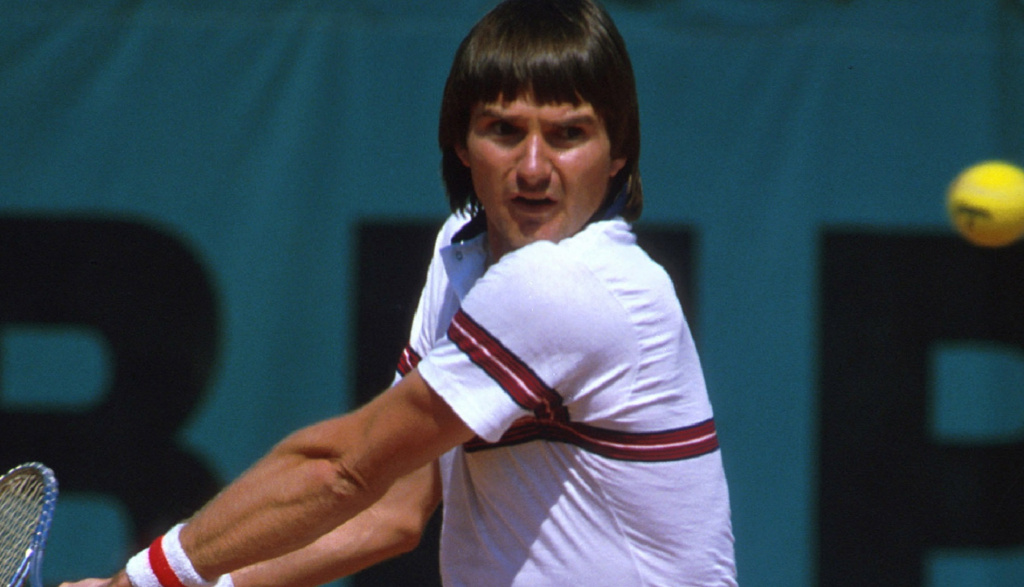 Jimmy Connors, born 1952, was one of the greatest tennis players of his time. Coached by his mother Gloria, Connors was one of the first few players to hit the ball flat and mainly from the baseline. Hitting the ball on the rise, his game would be very influential for future generations of tennis players. “Jimbo” turned pro in 1972 and became world No 1 by 1974. In fact, that year he won three out of the four Grand Slam tournaments, and was not permitted to participate at Roland-Garros, the fourth one, due to a lawsuit he filed against the ATP. He stayed on top of the ATP rankings for a record 160 weeks in a row, from 1974 to 1977. Losing his throne to Bjorn Borg on August 23, 1977, for just one week, he reclaimed it for another 84 weeks, until the spring of 1979. He had won five Grand Slams titles before that point; the Australian Open (1974), Wimbledon (1974) and the US Open (1974, 1976, 1978). In 1979, Connors had not performed as well as in his peak years. He had not reached a Grand Slam final for the first time since 1973, and yet he was still ranked No 3 in the world.

Founded in 1970, the year-end Masters was the final showdown between the eight best players in the world. Held in a different location every year at the start, and settled at Madison Square Garden, in New York, in 1977. In this “World’s Most Famous Arena”, the Masters Cup became more than just a tennis tournament, but a spectacle. In this first edition, tickets were sold out well in advance, with more than 18,500 spectators packing the stands. The tournament director, Ray Benton, had moved the event to January, in order to avoid competition with American football, and, before the upcoming Super Bowl, the Tennis Masters Cup was the main sports event in the United States that week.

When Gerulaitis met Connors in the semi-finals of the 1979 Masters, held in early January 1980, it would be an understatement to say that he was not the favourite. Although he had pulled out a great performance in the round-robin to defeat McEnroe (3-6, 7-6, 7-6), the odds were against him as he had lost his past 16 clashes with Connors.
At the start, it seemed that Connors was not going to release his hold on Gerulaitis, as he took a 5-3 lead. In this ninth game, several over-rules led to confusion and after Gerulaitis saved a first set point, Connors obtained a second one, which the New Yorker saved with an ace. That ace was called out very late by the linesman, but, as Gerulaitis hit his second serve, Connors merely pushed the ball back and walked towards the deuce side, giving away the point to his opponent, who, although surprised, managed to hit the ball back. With all the mistakes made by the linesmen in that game, Gerulaitis hadn’t even realised it was a set point. “Was that set point?” he asked the journalists in the press conference, according to The New York Times. “I think he knew the ball was an ace and he gave me the point.”
“I was tired of all the bull that went on during that game”, Connors would explain, adding he had been “caught in the middle by the uncertainty of the officials” and his desire to be fair to Gerulaitis.
Connors didn’t benefit from this unusual display of sportsmanship, as Gerulaitis then won the four next games to seal the set, 7-5, before breaking his opponent twice in the second set to prevail 7-5, 6-2.
In the press conference soon after, the Lithuanian Lion came up with a statement that would live in tennis history: “And let that be a lesson to you all: no one beats Vitas Gerulaitis 17 times in a row.”

After this great win against Connors, Gerulaitis faced a player whom he had never defeated in 11 previous encounters, the Swedish legend, Bjorn Borg. There would be no miracle this time, as Borg would prevail, 6-2, 6-2. “There’s the rest of us, and then, there’s Bjorn Borg”, Gerulaitis said.
Gerulaitis would claim five consecutive wins against Connors, but he would never defeat Borg. In fact, the Swede would prove his 1980 statement wrong: according to the the ATP, he would defeat Gerulaitis 17 times without ever losing.