Each day, Tennis Majors takes you back in time to an important moment in tennis history. On this day, March 12, 1996, Chanda Rubin temporarily halted Jennifer Capriati’s comeback with a victory in Indian Wells. 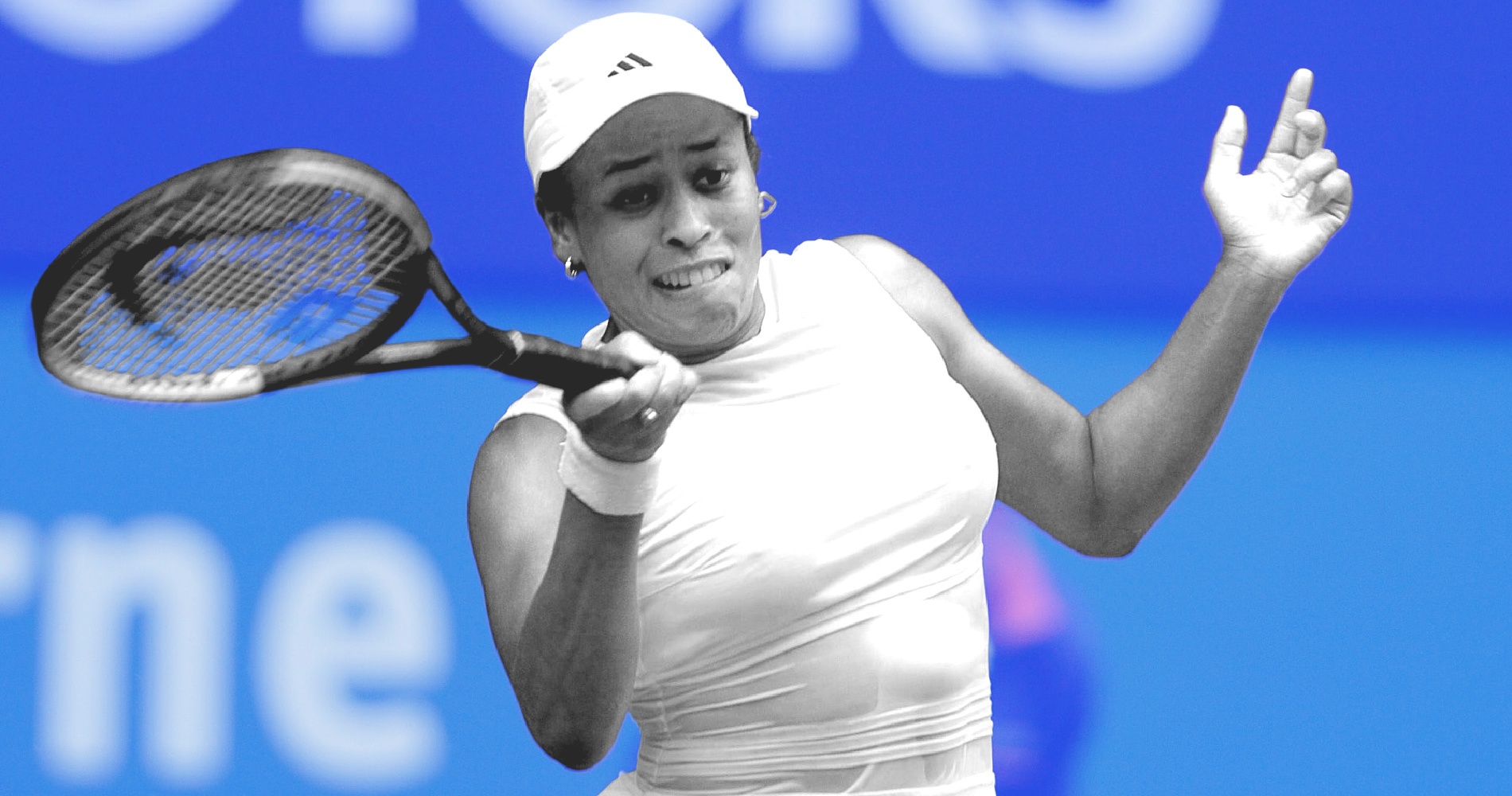 On this day, March 12, 1996, in Indian Wells, Jennifer Capriati was playing only her second tournament following a two-year break. Capriati was heavily defeated in the third round by No 5 seed Chanda Rubin (6-3, 6-3). At the time, the experts wondered if the former prodigy — who had been through a rough time away from the game — would be able to come back to the top. After all, she seemed to be far from her best level.

Chanda Rubin was born in 1976. She attended her first ITF events in 1990 and she obtained her first remarkable result at the end of 1991 — when, as a qualifier, she finished runner-up in Scottsdale (defeated by Sabine Appelmans 7-5, 6-1). That result propelled her in the top 100, but it wasn’t until 1994 that she established herself in the top 50. That year she played her second WTA final in Chicago (lost to Natasha Zvereva 6-3, 7-5). In 1995 she reached the quarter-finals at Roland-Garros after winning a memorable match against Jana Novotna. Down 5-0, 40-0 in the third set, Rubin saved nine match points and finally prevailed 7-6, 4-6, 8-6. Runner-up to Nathalie Tauziat in Eastbourne (3-6, 6-0, 7-5) and to Conchita Martinez in Los Angeles, the American began 1996 as the world No 15. At the Australian Open, she delivered her best Grand Slam performance — winning the longest match in the women tournament’s history against Arantxa Sanchez Vicario in the quarter-finals (6-4, 2-6, 16-14 in three hours and 22 minutes) before being defeated by Monica Seles 6-7, 6-1, 7-5 in the semi-finals after blowing a 5-2 lead in the last set. In March of 1996, she was world No 9 — her highest ranking to date.

Jennifer Capriati was born in March of 1976 on Long Island, New York. In 1986 her family moved to Florida, where — under the instruction of Chris Evert’s father, Jimmy — she became a real tennis prodigy. Her very powerful groundstrokes were quite revolutionary in women’s tennis. At 13 she won the junior events at Roland-Garros and she turned pro the next year, in 1990, before even turning 14. In March she reached the final of her first WTA tournament in Boca Raton, only defeated by world No 2 Gabriela Sabatini (6-4, 7-5). Already holding the 24th WTA ranking, Capriati then became the youngest player to ever reach the semi-finals at Roland-Garros, where she eliminated world No 8 Mary Joe Fernandez before losing to Monica Seles 6-2, 6-2. Defeated in the US Open fourth round by world No 1 Steffi Graf (6-1, 6-1), she was already the 11th-ranked player in the world. In 1991 and 1992 Capriati kept rising, reaching the semi-finals at Wimbledon and the US Open while also winning the gold medal at the Olympic Games in Barcelona (defeating Graf, 3-6, 6-3, 6-4). Unfortunately, she then struggled to handle the pressure put on shoulders by the media and in 1994 she even quit tennis temporarily and went through personal issues (she was arrested for shoplifting and drug possession). In 1996, she scheduled her comeback in Paris in early February, but a last-minute back injury forced her to withdraw and she played her first tournament in Essen — where she won two matches before losing to world No 12 Jana Novotna 7-6, 2-6, 6-3 in the quarter-finals. The next step of her journey was Indian Wells.

The history of the Indian Wells tennis event began in 1987, when the La Quinta tournament — under the impulse of Charlie Pasarell — outgrew its premises and had to move into a bigger location. Without leaving California it settled at the Indian Wells Tennis Garden. The women’s event only debuted there in 1992 and it was originally held one week before the men’s event, but in 1996 it became one of the few fully combined events on both the ATP and the WTA. Amongst its former champions were great players like Graf, Martina Navratilova, and Monica Seles.

At the start of 1996, Jennifer Capriati’s return to the game was drawing a lot of attention. Although she was only 19 years old she had already had the time to be a tennis superstar, reaching the Roland-Garros semi-finals at the age of 14 before pressure took the best of her. Following her first-round loss at the 1993 US Open, she decided to take a break — suffering from psychological issues. In May 1994 she was arrested on a charge of marijuana possession and shoplifting, making headlines in the papers around the world. However, almost two years later she returned to the game and appeared fit and well-prepared. In her first appearance in Essen, where she entered the draw without a ranking, she won two matches before losing a tight quarter-final match against world No 12, Jana Novotna 7-6, 2-6, 6-3.

“You don’t lose your skill or your strokes, but it gets to be a different perspective when you take a lot of time off,” Capriati said about her two-year break. “But you become more aware of the different aspects of the game.”

In the round of 16 on March 12 she faced a much bigger challenge against world No 9 Chanda Rubin, who had recently reached the semi-finals at the Australian Open. The clash was scheduled as the featured evening match, as Capriati’s return was drawing attention. However, despite her easy wins in the first rounds the former prodigy was overplayed by her opponent, who was always in control of the match and prevailed 6-3, 6-3. In her press conference, Capriati — who had made no fewer than 46 unforced errors — seemed less disappointed and more lucid that the audience.

“First of all, I mean, she has been playing and I haven’t,” Capriati said. “I don’t think I played as well as I would have liked. I think I forced the error a lot more this match.”

Rubin said her game plan against Capriati was to be aggressive and take charge, and she felt that overall she was able to do that in her 6-3, 6-3 victory.

“I knew at any time that I couldn’t let up, that she would be in the match,” Rubin said. “I kind of let her back into the match in the second set. I pretty much figured that I needed to keep a few more balls in play, and that was all I needed to do at the end.”

Even though she was eliminated, Capriati showed an impressive level of play after two years away from the tour and having faced so much personal struggle.

Lindsay Davenport, whom she would have faced if she had beaten Rubin, commented, “I think she has gone through a lot of troubles and to come back to a life that is very demanding, but gave her a lot of success, can only be a positive story. She seems like she is a totally different person than when she was off the tour. She seems just kind of maybe at peace with herself.”

Capriati’s return to the top would take longer than she probably expected. She wouldn’t achieve any remarkable results until the 2000 Australian Open, where she reached the semi-finals. This would be the start of a whole new career; from that moment Capriati would never leave the top 10 until her retirement in 2004, claiming three Grand Slam titles (the 2001 and 2002 Australian Open, and Roland-Garros in 2001). She would reach world No 1 in 2001 and she would sit on the top spot for 17 weeks.

Defeated in the Indian Wells quarter-finals by Lindsay Davenport (6-0, 6-3), Rubin would finish runner-up to Graf in Miami (6-1, 6-3), reaching world No 6 — which would remain the best ranking of her career. The rest of her 1996 season would be plagued by injuries. She would claim a total of seven titles throughout her career and she would reach the Roland-Garros quarter-finals twice more, in 2000 and 2003.