Every day, Tennis Majors takes you back in time to relive a tennis event which happened on this specific day. On this day, July 12, 2015, Novak Djokovic prevailed over Roger Federer in the Wimbledon final for the second year in a row. 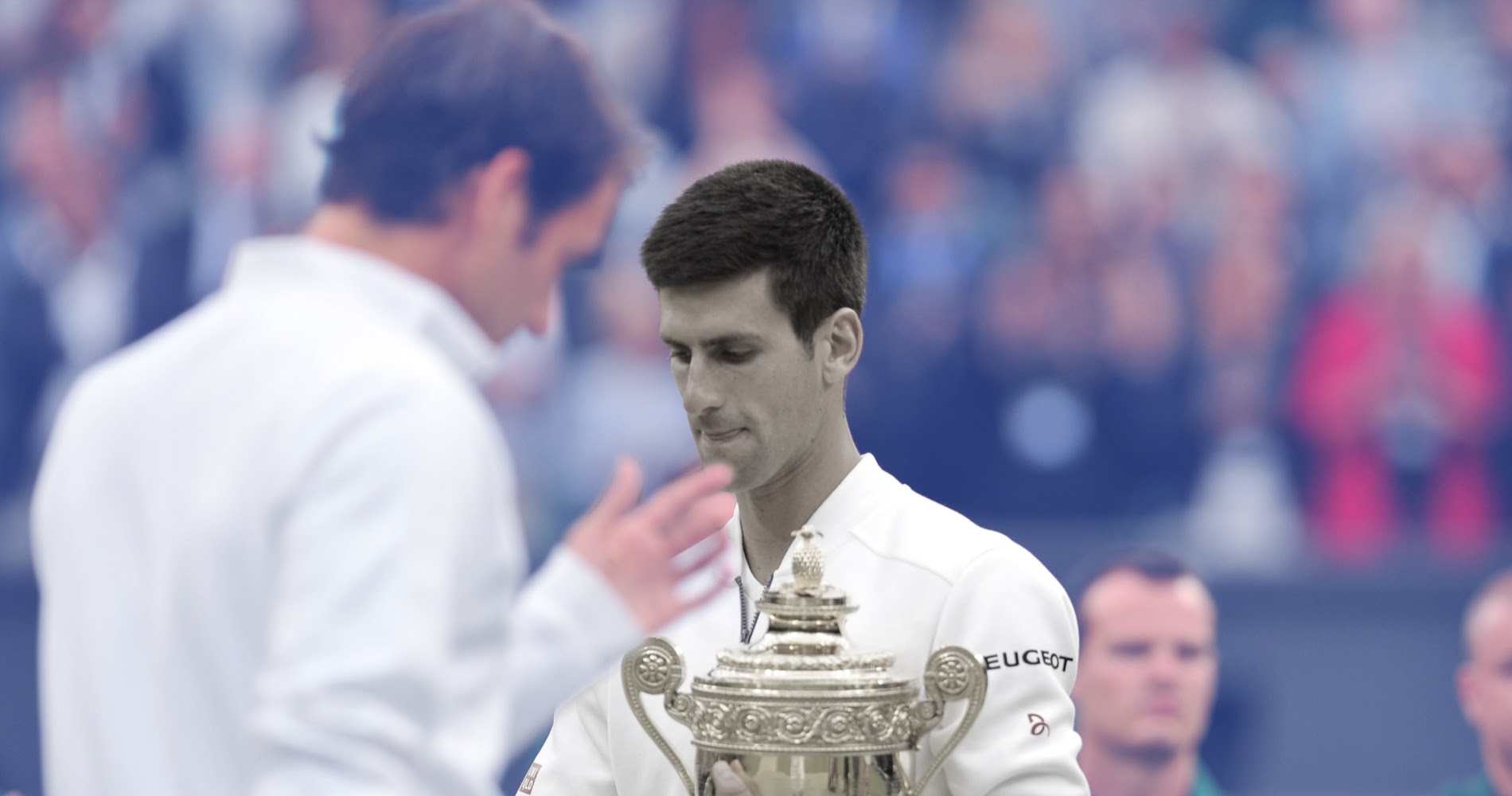 On this day, July 12, 2015, Novak Djokovic edged Roger Federer for the second time in a row in the Wimbledon final (7-6 6-7 6-4 6-3). It was only the second Grand Slam final reached by the Swiss Maestro in three years. A year before, Djokovic had already edged a vintage Federer in the final round of the Championships, after a five-set battle (6-7, 6-4, 7-6, 5-7, 6-4), confirming his hold on the Tour and Federer’s struggle to stay level with his rivals. For the Serbian, who had just suffered a devastating loss in the Roland-Garros final against Stan Wawrinka, it was his ninth major crown and the first step of a journey that would see him claiming the four Grand Slam titles in a row.

Novak Djokovic was born in 1987. He entered the top 100 in 2005, finishing the year as world No 83. In 2006, he made himself famous by reaching the quarter-finals at Roland-Garros while ranked only No 63, after he beat world No 9 Fernando Gonzalez in the second round. His breakthrough year was 2007, when he reached the semi-finals at Roland-Garros and Wimbledon (stopped each time by Rafael Nadal) before making his way to the US Open final where he was defeated by Federer (7-6, 7-6, 6-4).

At the start of 2008, he triumphed for the first time in a major tournament, edging Jo-Wilfried Tsonga in the Australian Open (4-6, 6-4, 6-3, 7-6). Djokovic then remained world No 3 for the next three years, often reaching the last rounds of major events where Federer and Nadal kept preventing from adding more major crowns to his list of achievements.

Things changed in 2011, when Djokovic played a close to perfect first half of the season. Triumphing at the Australian Open at Andy Murray’s expense, he remained undefeated for 43 matches, until Federer beat him in the semi-finals of Roland-Garros. Since then, the Serbian had accumulated six new Grand Slam crowns (Wimbledon in 2011 and 2014, the US Open in 2011, the Australian Open in 2012, 2013 and 2015). Although he had been challenged for the world No 1 spot, especially by Nadal in 2013 and 2014, he had spent more than 150 weeks on top of the ATP rankings since 2011. In 2015, after his Australian Open title, he faced the biggest disappointment of his career at Roland-Garros; having finally defeated Nadal in the quarter-finals (7-5, 6-3, 6-1), he was dominated in the final by Stan Wawrinka, who played flawless tennis to triumph in four sets (4-6, 6-4, 6-3, 6-4)

Roger Federer, the former king struggling to keep up pace

Roger Federer, the Swiss maestro, born in 1981, was world No 3 in June 2012. He had dominated the game in the 2000s, especially between 2004 and 2008, collecting 12 Grand Slam titles before Nadal challenged him for the world No 1 spot. In 2009, after three lost finals against his Spanish nemesis, he eventually triumphed at Roland-Garros, achieving a career Grand Slam that made most of the tennis world consider him to be the greatest player of all time.

In 2011, Djokovic became the best player in the world. Federer, who had claimed 16 Grand Slam titles between 2003 and 2010, did not lift a major trophy until Wimbledon 2012. In the next 11 Grand Slams, he had reached the final only once, at 2014 Wimbledon, where Djokovic edged him in a five-set battle, and he had been stopped three times in the semi-finals. As Federer had not claimed a Grand Slam in three years, many experts now thought he was no longer capable of triumphing in major events anymore at the age of 33.

Wimbledon is the oldest and the most prestigious tennis tournament in the world. Held by the All England Lawn Tennis and Croquet Club since 1877, it moved into its current location in 1922, the same year when Centre Court was built. Considered by many as the most intimidating court in the world, with its famous Rudyard Kipling quote above the entrance (“If you can meet with triumph and disaster and treat those two impostors just the same”), the Centre Court had seen the best players of all time competing for the title.

After the US Open switched to clay and then hard court in the 1970s and after the Australian Open switched to hard court in 1988, Wimbledon remained the only Grand Slam tournament to be played on grass, a surface that is usually more suitable for aggressive serve-and-volley players. Not only did Wimbledon keep its surface, but it also maintained old-fashioned traditions such as the white dress code and no music via loudspeakers during changeovers or between matches.

The 2015 Wimbledon final was a rematch of the 2014 final, with Djokovic facing Federer again. Both players were at turning points in their careers, after the same man, Wawrinka, had defeated them at Roland-Garros a few weeks before. The Serb, beaten in the final when he had been favourite after his impressive win after Nadal, had just seen the last title still missing from his list of achievements slip from his hands at the last hurdle. The Swiss, on the other hand, had not claimed a Grand Slam title in the last three years, and he had faced major disappointments in 2015, especially when he lost in the third round at the Australian Open against Andreas Seppi (6-4, 7-6, 4-6, 7-6).

As a result, while Federer had a lot to prove to himself and to the public at Wimbledon, “Nole” wanted to bounce back after the Roland-Garros knockout. The Swiss had raced through his part of the draw to get to the final, dropping only one set on his way, against big server Sam Groth in the third round (6-4, 6-4, 6-7, 6-2). Even the 2012 champion Andy Murray was blown off court on straight sets in the semi-final by Federer, 7-5, 7-5, 6-4.

Djokovic would have cruised through the tournament, beating all his opponents in three sets if it hadn’t been for his fourth round against Kevin Anderson. Disoriented by Anderson’s big serve and high-risk game, the Serbian had been down two sets to love, before reversing the scenario and prevailing 6-7, 6-7, 6-4, 6-1, 7-5.

Displaying an aggressive game plan, Federer took Djokovic’s serve to lead 4-2 in the first set. The Swiss would never break again in this Wimbledon final. In his first six matches, Federer had not lost his serve at all but the Serb broke back immediately and evened the score. After Federer blew two set points at 6-5, he collapsed in the tiebreak, which he lost 7-1. Djokovic had clinched the first set.

The outcome of the second set was also decided in the tiebreak, in which “Nole” led 6-3, before Federer levelled the score. The Swiss saved a total of seven set points, and eventually converted the first one he obtained, to seal the tiebreak 12-10. One set all.

At the beginning of the third set, at 1-1, Djokovic broke Federer again, after the Swiss hit an awful forehand on the break point. A 15-minute rain delay at 3-2 did not help Federer to get back on track. Djokovic won the third set 6-4, winning 94 percent on his first serve.

In the fourth set, Djokovic outclassed Federer, breaking his serve two more times. The Swiss, who had not lost his serve in his six first matches, had been broken four times by Djokovic, and had managed to convert only one break point out of seven. With this outstanding performance, Djokovic confirmed his hold over Federer and on the ATP tour. He also showed that he his confidence had not been shaken by his Roland-Garros loss.

A few months later, Djokovic would face Federer again in the US Open final. Although Federer would play at a very high level, Djokovic would once again remain solid and prevail in the end (6-4, 5-7, 6-4, 6-4). Finishing the year as world No 1 for the fourth time, the Serb would then achieve a Grand Slam over two years, claiming the 2016 Australian Open (beating Andy Murray for the fourth time in the final, 6-4, 6-1, 7-6) before finally triumphing at Roland-Garros against the Murray again (3-6, 6-1, 6-2, 6-4).

Read also
August 26, 1986: The day McEnroe lost in the US Open first round for the first and only time
Tennis Majors

Although Federer seemed to be declining in 2015, he would add three Grand Slam titles to his list of achievements; the Australian Open (in 2017 and 2018), and Wimbledon in 2017. He would then hold an unbelievable record of 20 Grand Slam crowns.