Every day, Tennis Majors takes you back in time to relive a tennis event which happened on this specific day. On June 3, 2001 Gustavo Kuerten produced a stunning comeback to beat American Michael Russell in the fourth round at Roland-Garros, prompting one of the most famous celebrations in the event’s history 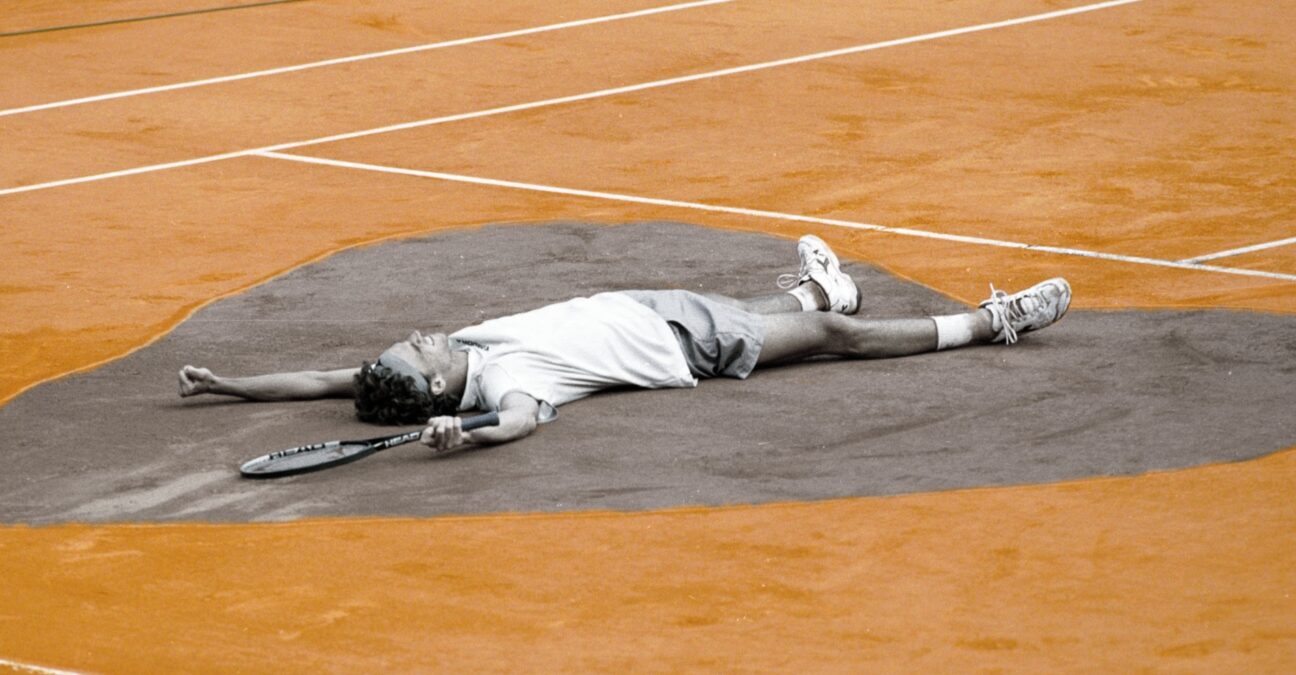 On this day, June 3, 2001, Gustavo Kuerten, the two-times Roland-Garros champion, showed his appreciation for the crowd’s support by kneeling in a heart he had carved with his racquet on Court Philippe Chatrier. “Guga”, as he was affectionately called, had miraculously survived his fourth-round match against Michael Russell, ranked No 122 in the world, coming back from two sets down and saving a match point. He would go on to win a third Roland-Garros crown after sealing his love story with the tournament and the French public.

Gustavo Kuerten, born in 1976, had made himself famous in 1997, when, ranked No 66 and unknown to the public, he claimed the title at Roland-Garros, defeating the last three champions on his way (Thomas Muster, Yevgeny Kafelnikov and in the final, Sergi Bruguera, 6-3, 6-4, 6-2). Not only was it his first career title, but it was also his first final on the tour. His game, relying on a great first serve and an impressive one-handed backhand, topped with great drop shots, made him a natural clay-court player.

He collected a second Roland-Garros crown in 2000, his peak year, defeating Magnus Norman in the final (6-2, 6-3, 2-6, 7-6). The same year, after an amazing triumph at the Masters Cup, where he defeated both Andre Agassi and Pete Sampras on fast indoor courts, he finished the year as world No 1, edging Marat Safin at the last hurdle. In 2001, he was one of the big favourites at Roland-Garros again, after claiming three titles on clay, in Buenos Aires, Acapulco and Monte-Carlo, and finishing runner-up to Juan Carlos Ferrero in Rome.

Michael Russell, born in 1978, was ranked No 122 at the start of the French Grand Slam, where he had to go through the qualification rounds. In fact, Russell had just achieved something unique in tennis history as he had become the first player to ever qualify for four consecutive Grand Slam tournaments. In 2001, he had mostly competed on the ATP Challenger tour in North and South America.

Kuerten had won the tournament twice already. His cheerful demeanour, combined with his unexpected and refreshing 1997 victory, had made him one of the public’s all-time favourite players. Facing him in Paris was maybe even harder than facing a Frenchman, as he always had a very strong support from the crowd. On the other hand, this was Russell’s first appearance in the Roland-Garros main draw.

The facts: Kuerten snatches victory from the jaws of defeat

Scheduled as the first match on the newly renamed Court Philippe Chatrier, the fourth-round match between Kuerten and Russell was not expected to be remembered almost 20 years later. The Brazilian had already won the tournament twice and his record on clay in 2001 had made him one of the top title contenders in Paris that year. His opponent had never played in the main draw.

The week before participating in the Roland-Garros qualifying event, Russell had lost in the semi-final of an ATP Challenger event in Scotland against world No 214 Gorka Falle. The American even had to save a match point against Frenchman Olivier Patience in the first round of the qualifying event. In the second round of the main draw, he was down two sets to love against Bruguera before the Spaniard felt sick and retired at the beginning of the fourth set. On top of that, he had already played six matches in Paris and needed five sets in the third round to edge Xavier Malisse (3-6, 6-4, 6-1, 1-6, 6-4). There was surely no way he could be a threat to Kuerten.

Yet, two hours later, in front of a mesmerised audience, Russell, serving for the match, was one point away from eliminating the best clay-court player at the time. Kuerten was just a shadow of himself, far away from his usual standards in every aspect of the game, while his challenger boldly took his chances. The American had never played in front of such a crowd, and he was enjoying it so much that he wasn’t even bothered by the fact that they loudly cheered for his opponent. So far, he had delivered a great performance and displayed a high level of energy.

The players, very cautious on such an important point, engaged in a long rally from the baseline. After 26 strokes, a Kuerten forehand, which many people believed was out, landed on the baseline and allowed him to save the match point. Guga was about to write a new chapter of his legend. The Brazilian evened the score and pushed Russell into a tiebreak, which he won 7-3.

The momentum had swung. In the next two sets, Kuerten outplayed his opponent, who had never played a fifth set before Roland-Garros, to seal his victory, 3-6, 4-6, 7-6, 6-3, 6-1. After the traditional handshake, Kuerten walked back to the middle of the court and, using his racquet, drew a heart on the ground. He then knelt in the middle of the heart and blew kisses to thank the crowd for the great support he had received that day. This gesture would remain a symbol of Kuerten’s special relationship with Roland-Garros and the French public.

What next? Kuerten wins a third Roland-Garros title while Russell peaks at No 60 in the rankings

“It was very special, maybe one of the greatest feelings in all my life on the tennis court,” Kuerten would comment, quoted by the ATP tour website. “I like these challenges, to fight and to give it my all.”

A week later, Guga would claim his third and last Roland-Garros title, defeating Alex Corretja in the final, 6-7, 7-5, 6-2, 6-0. He would draw a heart on the court again, but this time he would let himself lie on the clay, before getting up and climbing the stands to hug his long-time coach, Larri Passos.

Russell’s reflections on that match shows how this 2001 Roland-Garros fourth round would be remembered by tennis fans. Years later, even though he lost it and never reached the fourth round of another slam again, people would recognise him. “But even walking around the grounds in Paris today, fans will sometimes come up to me and say they remember watching that match and how special it was.” Russell would reach his best ranking, world No 60, in 2007. He would never claim a title or reach a single final on the main tour. 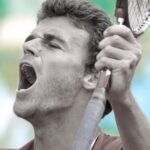