Every day, Tennis Majors takes you back in time to relive a tennis event which happened on this specific day. On May 24, 2004, Andre Agassi was beaten in the first round at Roland-Garros by a French qualifier ranked No 271 in the world 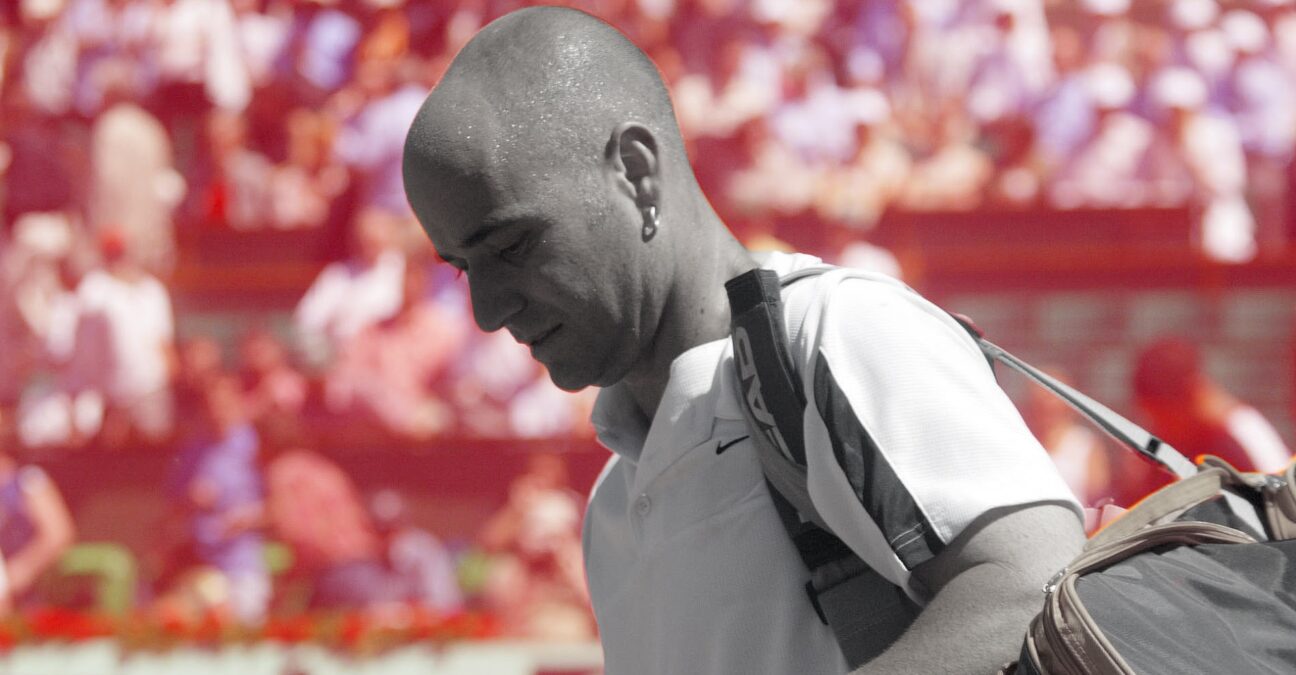 On this day, May 24, 2004, tennis legend and 1999 Roland-Garros champion Andre Agassi lost in the first round in Paris against the world No 271, French qualifier Jerome Haehnel. Although it was common knowledge that year that the 34-year-old American was struggling with injuries, it was still the worst loss of his career in a Grand Slam tournament since his Roland-Garros debut in 1987 where he suffered a second-round defeat against Patrice Kuchna, then ranked No 325.

Andre Agassi, the Las Vegas Kid, born in 1970, was a tennis legend. He had turned professional in 1986 and soon became one of tennis’ biggest superstars, thanks to his amazing tennis skills and also his interesting outfits, including the iconic denim shorts and the pink bicycle shorts worn underneath.

Taught by his father and then based at the Nick Bollettieri Academy, his game relied on a great return (the best of its time) and on hitting the ball on the rise on both sides with incredible power, which was revolutionary at the time and then copied by generations of players. After finishing runner-up three times, once at the 1990 US Open and twice at Roland-Garros (1990 and 1991), he claimed his first Grand Slam title at Wimbledon in 1992, defeating the big-serving Goran Ivanisevic in the final (6-7, 6-4, 6-4, 1-6, 6-4).

Frenchman Jerome Haehnel was born in 1981 and had turned pro in 1998. Mostly used to competing on the Futures and Challenger circuits, Haehnel had never played in the main draw of a Grand Slam event prior to Roland-Garros in 2004. Suffering from a phobia of flying, which was particularly inconvenient for a tennis player, he played only in Europe where he could travel by train or car. He was ranked No 271 at the time, not far from his best ranking of No 248, which he reached in September 2001. His last tournament before the Roland-Garros qualifying event was a Futures event in Neheim-Husten, Germany, where he lost in the first round to world No 855 Andis Juska, from Latvia.

The story took place at Roland-Garros, Paris. The stadium, located in the west of Paris at the edge of the Bois de Boulogne forest, had been hosting the French Grand Slam since 1928. It was the first and now only Grand Slam to be played on clay, the slowest surface, which made it the hardest tournament to win from a physical perspective. Its Centre Court, renamed in 2001 after the former president of the French Tennis Federation, Philippe Chatrier, had a capacity of 15,000. It was also the location of the National Tennis Centre, where the best professional and junior players from all over France were practising. Haehnel, as a part of the elite program in his youth, had been living a few yards away from Roland-Garros for years and knew the stadium by heart.

Agassi had played his first Roland-Garros in 1987 and the French crowd had seen the evolution of the Las Vegas Kid, first known for his looks and his 1988 umbrella joke, grow into a world-class champion.

When Agassi arrived in Paris in May 2004, it was no mystery that Roland-Garros was not on top of his priority list. The 1999 champion was now 34 and the clay-court game was too demanding, especially as he had been recently suffering from back pain. In fact, despite a good start to the year on hard court, he had only participated in one tournament on red dirt, in Sankt Polten, where he lost to doubles specialist Nenad Zimonjic, then ranked No 339 (6-2, 7-6). Nonetheless, he had a great record at Roland-Garros and even in the past three last years, he had reached the quarter-finals each time. So even if he had clearly prioritised hard courts over clay, the French crowd expected Agassi to be Agassi.

On this particular Monday, the legend faced French qualifier Haehnel, not the easiest experience for someone who was facing his childhood idol on a packed 15,000-seater Centre Court. And yet, Haehnel was far from overwhelmed.

Meanwhile, the Las Vegas Kid was not moving very well, not hitting the ball as hard as expected and soon began to get irritated. The focused Frenchman quickly took the lead and playing far better than his ranking would have suggested, he defeated his favourite player in three sets, 6-4, 7-6, 6-3. For the first time since the 1998 Roland-Garros Championships, Agassi did not get pass the first round at a Grand Slam tournament. In his press conference, he said he was not sure whether he would play in Paris the following year. In fact, he would, only to be defeated in the first round, this time by Finland’s Jarkko Nieminen.