Dustin Brown avenged a UTS1 loss to Corentin Moutet by prevailing in sudden death on Sunday afternoon. Brown came back from trailing two quarters to one for his first victory of UTS2. 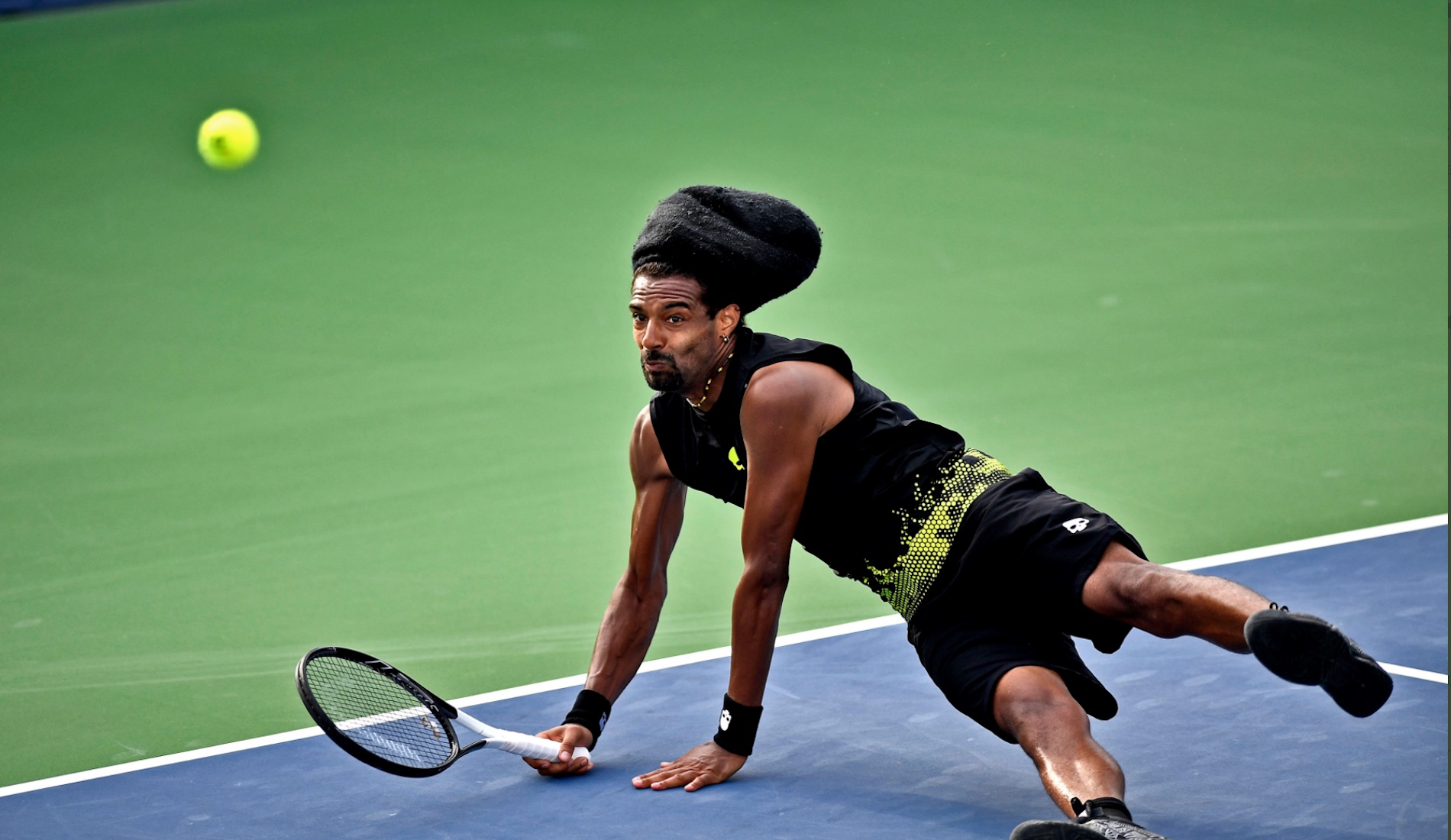 Dustin Brown earned a dramatic sudden-death victory over Corentin Moutet during round-robin competition at UTS2 on Sunday. The Artist saved one match point and then clinched his win with a diving volley winner to prevail 18-12, 13-17, 13-14, 19-9, 3-1. It was especially sweet for Brown because he avenge a 4-0 loss to The Tornado at UTS1. Both Brown and Moutet now have 1-1 records in Group B. The Artist lost to Benoit Paire on Saturday, while The Tornado opened with a sudden-death defeat of Fernando Verdasco. Paire can take control of Group B when he faces Verdasco at 11 p.m. on Sunday.

Moutet told interviewers that he did not get to sleep until 4 a.m. after playing the last match on Saturday against Fernando Verdasco. Not too surprisingly, he got off to a slow start in this Sunday afternoon match against Brown. The next point counts double cards were a big factor in the opening quarter. The Artist won one such point whereas The Tornado lost both of his service points that counted double. A successful serve-and-volley by Brown while using a winner counts three card extended his lead to 13-8. By that point it was all over for Moutet, who showcased a racket-throwing tantrum once he realize the quarter was hopeless.

“It can’t get worse than 0-4,” Brown said, referencing his UTS1 loss to Moutet. “I’m still just trying to play my game and that was the best I’ve served since I’ve been here. Just trying to put my foot down and be aggressive.”

“It’s okay; I’m not too tired,” Moutet said. “He’s just playing really well. It will be too tough if he’s playing this well.” When asked what he was going to do, Moutet said, “I’m going to slap him!”

Finally sinking his teeth into the match, Moutet got off to better start in the second quarter by storming ahead 3-0. Aided by an ace off the net thanks to the no-let rule, The Tornado extended advantage to 7-2. Brown eventually leveled up at 7-7 by winning each of his points that counted double, after which the Artist used the take away a serve card and won that point to lead 8-7. Moutet, however, soon won two points using the next point counts double card and dominated the rest of the quarter.

“It was fine,” Brown assessed. “He just came up with good shots. For once I came back in the set with the two-point card, but there were just a few points here and there where he came up with a better answer.”

The Tornado storms into the lead

A more competitive third quarter was not decided until the very end. This time it was Brown who went ahead 3-0, but Moutet quickly evened things up for 3-3. Back and forth they went, with The Tornado eventually winning a next point counts double for a 9-8 advatage. Brown did the same en route to a 10-10 deadlock. The Artist also won a crucial point against his opponent’s serve on the win in less than three shots card, inching ahead 11-10. Once again, though, it was Moutet who was stronger at the end and a run of four straight points gave him the quarter.

“I’m not angry; I just express my emotion,” said The Tornado, who again threw his racket multiple times during the frustrating parts of the quarter. “I think it’s not bad. I have to express them, otherwise it’s in my body and I don’t feel good. Sometimes I can look angry and sometimes I can look calm. I just have to find the in between.”

Brown ties it up

Brown got back on track by taking the fourth quarter just as he did the first – without much drama. It was competitive early, but The Artist took control late when he used the must serve-and-volley against Moutet. The Tornado promptly dumped a volley in the bottom of the net and then double-faulted. Brown punctuated the quarter with a backhand volley winner that spun back over the net onto his own side of the court. Shortly thereafter, sudden death was required.

“I would say this is a coin toss,” the 35-year-old said of sudden death. “It’s going to be on my racket, definitely. Either I make the points or I make the mistakes. We are both going to play our game.”

The Artist finishes with a masterpiece

At 1-1 – Moutet’s match point since he had won the previous point – Brown came up with a service winner. Then it was The Artist’s match point, and he converted it in a way that only he could. The Tornado struck what looked like a successful forehand pass, but Brown produced a diving cross-court volley winner to clinch victory.

“On a point like that where it really counts, I’m diving.”