The latest version of the WTA rankings saw Coco Gauff reach another milestone in her sensational young career.

Coco Gauff has become the first 15-year-old in 15 years to reach the top 50 of the WTA rankings.

The American made a strong start to the year with her impressive run to the fourth round of the Australian Open, where she beat defending champion Naomi Osaka.

Those exploits from Gauff followed up on her breakout second half of the 2019 season.

She burst onto the scene with a run to the last 16 at Wimbledon last year and went on to claim her first WTA Tour title in Linz.

Other WTA Tour results and points dropped for rival players saw Gauff reach a new peak of number 49 in Monday’s latest version of the WTA rankings, the first time she has made the top 50.

The last 15-year-old to reach the top 50 was Sesil Karatantcheva, who achieved the feat in the week of August 1, 2005.

Who’s that flying into the Top 50 for the first time…at the age of 15?

Gauff will look to continue her ascension when she returns to action at the Indian Wells Open next month, one of the biggest WTA tournaments outside of the grand slams due to its Premier Mandatory status.

She turns 16 in March, which means the current age restrictions which apply on the number of tournaments she is able to play will ease.

Australian Ash Barty remains top of the WTA rankings, while Bianca Andreescu is up to fourth, with Australian Open winner Sofia Kenin now in fifth position.

Belinda Bencic has fallen five places to ninth after her first-round loss at the Dubai Tennis Championships, an event she won last year.

WITH COREY AND CANDI GAUFF 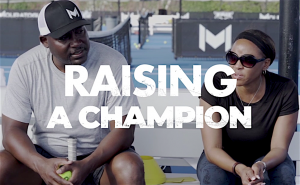