Grigor Dimitrov has no chance of reaching the UTS2 semifinals after he lost to Feliciano Lopez in sudden death during round-robin action on Sunday night. 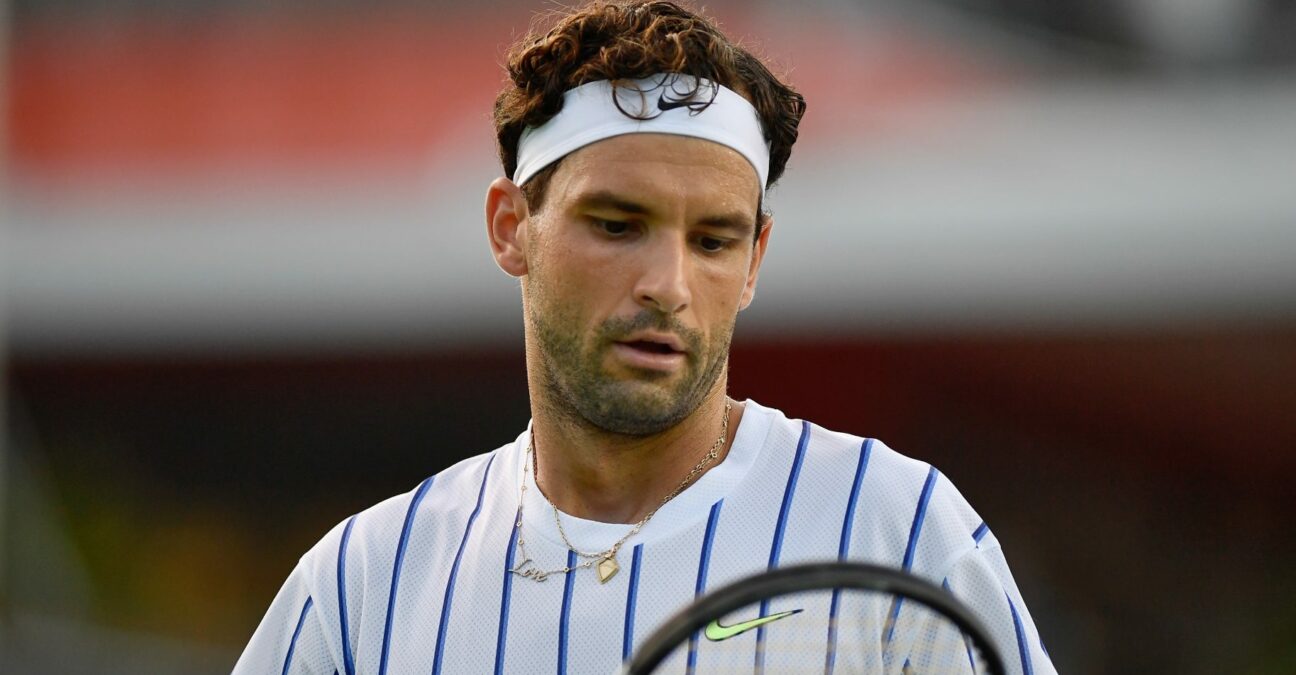 Feliciano Lopez improved to 2-0 so far at UTS by beating Grigor Dimitrov in sudden death on Sunday. At the same time, Dimitrov’s 17-10, 14-15, 12-16, 16-12, 2-0 loss ended his chances of qualifying for the semifinals in his UTS debut. Sudden death lasted only two points, as Grigor did not get a single ball in play. Lopez delivered a service winning on the opening point after which the Bulgarian double-faulted to end it in unceremonious fashion. Lopez could mathematically clinch a spot in the semifinals later on Sunday pending the outcome of the Richard Gasquet vs. Alexei Popyrin match (live here).

In his UTS debut on Saturday, Dimitrov lost four consecutive quarters against Richard Gasquet. Grigor’s woes continue with another dropped set at Lopez’s hands, this one by a 17-10 margin. El Torero took control of the opener when he won two consecutive service points while using the next point counts double card. Dimitrov tried to get back in it with his winner times three card but won only one of those points – and not with a winner. Lopez proceeded to activate his steal serve card, giving him a total of four serves in a row, and from 11-7 he won those two points to go ahead 13-7. From there it was all over.

“Probably one of [my best] starts so far,” the 38-year-old said. “I had a nice nap in the afternoon – the famous siesta – is working out. I think I’m playing the way I have to play. [Marc Lopez] wanted me to play aggressive and go to the net as much as I can.”

“The court suits him amazing,” Dimitrov explained. “He’s a big server; covers the court. I’m pretty tired to be honest. Yesterday was my first time on court after six days. I just want to see where I’m at; low expectations.” 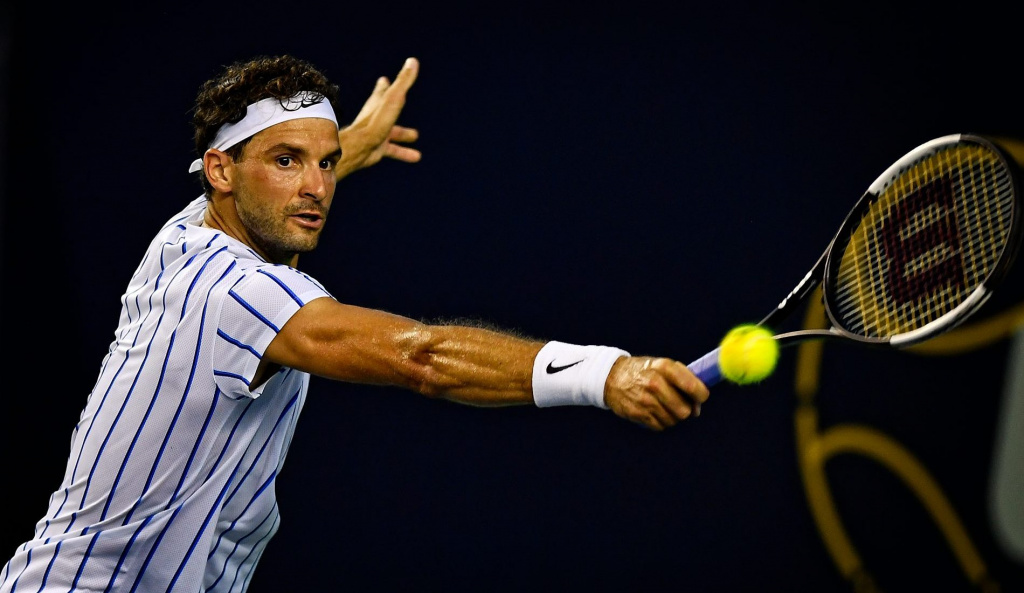 Grigor gets back in it

Lopez again used his cards in expert fashion throughout the second quarter, winning two straight next point counts double situations for a 10-6 advantage. However, two spectacular winners by Dimitrov when his opponent was serving leveled the quarter at 10-10. The see-saw second quarter continued as Lopez surged to a 14-10 advantage only to see Grigor take five consecutive points to steal it 15-14. At 14-14 and serving, El Torero missed a routine volley well long to tie up the match.

“I screwed up everything,” Lopez lamented. “I played a very good quarter and threw away everything with two points. The volley was awful. I’m playing well, but it’s about winning certain points. You can play your best but end up losing.”

Not in the cards for El Torero

With momentum in hand, Dimitrov raced to a 5-1 lead in the third. Desperate times for El Torero called for desperate measures and he played his next point counts double card, but he won just one of the ensuing points. Lopez also played the take away a serve card immediately thereafter and won both points on Grigor’s serve to pull within 6-5. Dimitrov, however, still had both of his cards in his pocket (next point counts two and take away one serve) and he used both of them with effect to run away with the quarter.

“Could be better; could be worse,” Lopez assessed. “I’m not playing bad at all, honestly. Overall I think I’m playing well. I’m not winning any of the points when I’m playing my cards.” 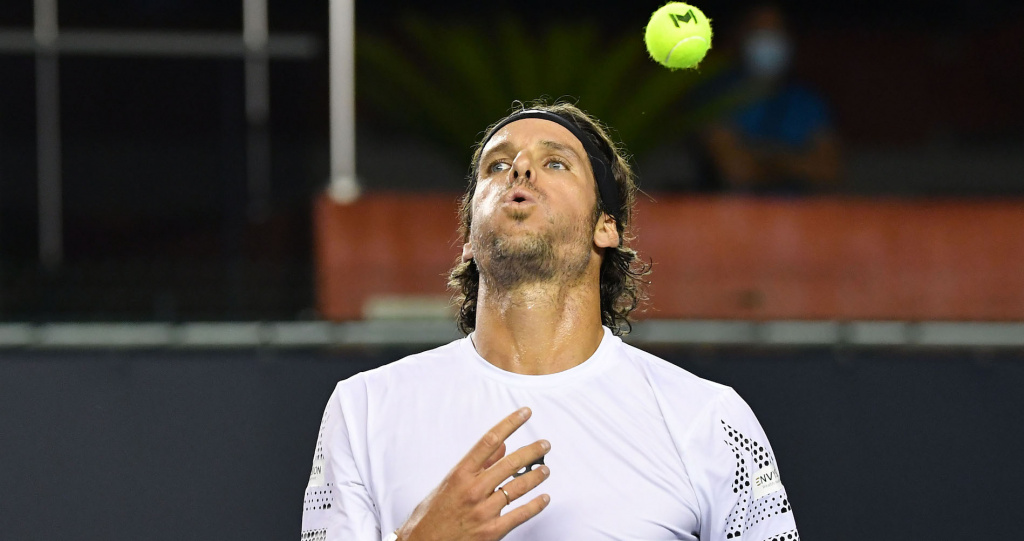 Both players held onto their cards for the majority of the fourth quarter, and neither one could gain an upper hand. Lopez finally did by winning a pair of return points for 9-7, after which Dimitrov activated the next point counts two card – even though El Torero was serving. Grigor managed to win one of those points but then double-faulted twice in a row to fall behind 12-9. Lopez all but wrapped up the quarter when he won two straight points that counted double.

“What can you do? It’s only two or three points,” Lopez said of sudden death. “I want to get the first point. That’s what I’m focused on.”

“It’s a match point – every single ball,” Grigor commented. “First of all I need to get his serve back in the court. Let’s focus on one task at a time!”

But Dimitrov did not get Lopez’s serve back in the court – nor did he get any ball in the court. Following a service winner by the Spaniard, Grigor dumped a double-fault in the net to end it.

“The first point of the sudden death (was the difference),” Lopez reflected. “It was about winning this point and putting some pressure on him…. I’m feeling good. I think I’m playing great tennis. Hopefully that will be enough to qualify for the final four this time. I need another win against Richard (to make sure).”