Novak Djokovic withstood a Gael Monfils hurricane to eventually come out on top of a classic encounter and reach yet another final in Dubai, the Serb saving three match points before winning 2-6, 7-6, 6-1. 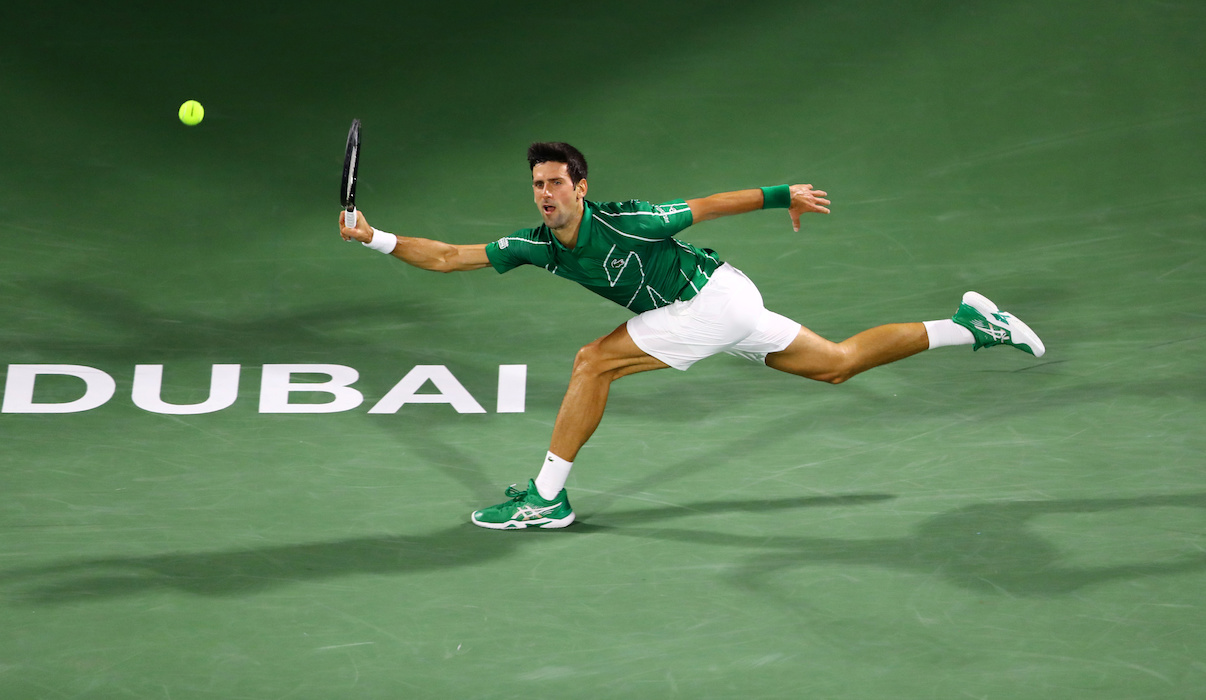 It was a brilliant fightback from the world No.1 after an epic match and he will now play Stefanos Tsitsipas on Saturday in a bid for his fifth Dubai crown.

“It was truly an escape, he was clearly a better player for two sets and I was fortunate to work my way back in the second set, had set points at 5-4 and 6-5 but Gael is playing as well as he has played ever,” said Djokovic after his win. “I have played him many times and very difficult to go through him. I have a good defence but what he did today for two sets was just unbelievable. These kind of matches happen and I’m sorry for him but great effort.”

‘Nobody beats Vitas Gerulaitis 17 times in a row’ is one of the most famous quotes in tennis, after the American finally broke a 16-match losing streak against compatriot Jimmy Connors in 1980.

Monfils was in a similar position on Friday evening, having lost 16 consecutive matches against the mighty Djokovic, who has lost just 11 games in six sets of tennis in Dubai this week.

If anyone was in a position to break such an unenviable hoodoo, it was the in-form Frenchman, who came into the semi-final on the back of a 12 match winning streak that included titles at the Open Sud de France in Montpellier and the ABN AMRO World Tennis Tournament in Rotterdam.

A couple of uncharacteristic early errors from the racket of the Serb suggested in might, just might be 17th time lucky for Monfils, Djokovic conceding break point in the opening game.

The Frenchman began confidently on his own serve, booming down a high percentage of first serves, but breaking the often-impenetrable Djokovic would be the only way of emerging triumphant. Heavy and accurate hitting garnered break points in Djokovic’s second service game and it was Monfils who gained the upper hand after one of the rallies of the tournament, won after a trademark backhand ‘slam dunk’.

Taking the ball early and hitting the cover off it at every opportunity, Monfils was taking time away from Djokovic as no player has managed for quite some time, but the key was now to hold onto his serve.

Finding laser-like backhands up the line, Monfils was piling on the pressure, forcing Djokovic into errors to force another break of serve and win a barely believable 6-2 set. It was a spectacular first set, full of extended rallies and glorious shot making.

It’s one thing to take a set off the world No.1 but quite the other to sustain a level of play to take victory. That Monfils was able to sustain his intensity into the second was admirable, and the crowd was now also on his side, chants of ‘Monfils, Monfils’ filling the Dubai night sky.

Still, there was no respite for Djokovic, Monfils sending down successive aces to draw level before breaking to love to establish a stranglehold over a now bewildered Djokovic. It’s not that he was playing badly, but everything he tried was coming back with interest.

A 214kmh second serve ace provided notice that Monfils was determined to take the match out of Djokovic’s hands, and at 6-2, 3-1, it looked there for the taking. But, against Novak Djokovic, any tennis match is never over until the final point is won. Roger Federer testimony to that after the pair’s epic 2019 Wimbledon final.

The fightback began when Monfils blasted into the net for 3-3, the Serb raising his game at just the right time. One particular rally in the ninth game summed up the effort of both players, Monfils running down a drop shot before sliding onto his back, a raised thumb in the air.

Two rallies later, the Frenchman was on the floor again after diving through the air to retrieve a shot, Boris Becker style. But this was a hard court, not the soft grass of SW19! There he remained for some seconds, taking his towel with his back on the floor as Djokovic regrouped in his chair.

Like a prize-fighter who knew he had his man wounded, Djokovic went in for the kill, climbing off the canvas himself after an eye-watering scissor-split to forge two set points. But he couldn’t deliver the knockout blow, Monfils saving three more at 5-6 to send the set to a fitting tie break.

Djokovic had won seven out of the last nine breakers between the pair, but it was Monfils who gained the early advantage after the first four points went against serve. Standing at 6-3, and with the ball in his hand Monfils was a point from victory. But following a missed backhand and long forehand, Djokovic was back in the hunt. Shades of the Federer Wimbledon final all over again?

MONFILS CAN BE PROUD BUT…

Four times Djokovic has come from a set down to beat Monfils and he would have to go through the same process once more after Monfils dumped a second serve into the net, a sad way for it to end.

“Today is one of the matches where I just had to hold my nerve at important moments and wait for another chance to appear, and when it does, try to use it,” reflected Djokovic. “I wasn’t very successful with my set points, many missed opportunities at 5-4 and 6-5. It shouldn’t have gotten to a tie break but in the tie break he was 6-3 and serving. I was just hoping he was going to miss the first serve and that’s what happened on both match points, Gael gave myself a chance to get into the rally and I played really well from that point onwards.”

Into the decider, and it appeared to be a question of which player had more gas left in the tank. And with Djokovic breezing through his previous rounds, the answer soon became apparent as the Serb broke through in the third game before pressing home his advantage racing through the decider, the spirit of a weary and cramping Monfils finally broken.

Monfils can rightly be proud of his efforts after playing his part in a brilliant match, but that will surely come as no consolation, his record against the great man now reading a chastening 17-0.

“Obviously he had an injury that didn’t give him a chance to play as well as he did the first couple of hours, so I wish him all the best and hope he recovers quickly, because if he plays this way, he’s going to be one of the best players in the world this year,” added the Serb.

That was some effort 👏 #DDFTennispic.twitter.com/yF5seggmQl