Dominic Thiem maintained his good form with a victory over UTS1 winner Matteo Berrettini to win the Bett1 Aces exhibition event in Berlin on Wednesday. 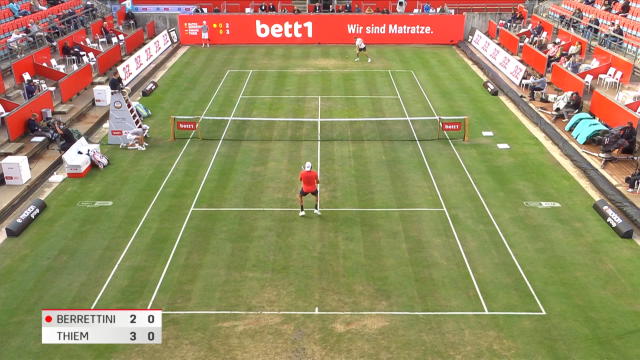 The Austrian, who has been one of the most active players during lockdown, including appearances in UTS1, the ill-fated Adria Tour and his own event, the Thiem7, recovered from the loss of the opening set on a tiebreak to win 6-7 (4-7), 6-4, 10-8.

For Berrettini, it was another good week on another new surface – grass – after becoming the first winner of Ultimate Tennis Showdown at the Mouratoglou Academy in the south of France but Thiem, who beat the Italian during the UTS group stages, snatched the win in a tense Champions tiebreak at the end.

“I think there was a changing point in the second set where I saved two break points. I got really lucky with a drop shot that came off the frame (to save one break point),” Thiem said after a match carried live on Eurosport.

“We both served really well. However, during one game I managed to get all my returns in and that’s where I broke him. But in general it was a very close match. Match tie-breaks are always very close but I guess I was the luckiest today.”

The decisive break came in the seventh game of the second set and Thiem then sealed victory on his third match point.

Two-time Wimbledon champion Petra Kvitova will take on Elina Svitolina in the women’s final on Friday, though the match will now be played on hard courts after bad light forced it to be postponed on Wednesday.