Petra Martic will face Elena Rybakina in the semi-finals of the Dubai Duty Free tennis championships after she defeated Anett Kontaveit 7-6, 6-1 in an entertaining match of contrasting styles. 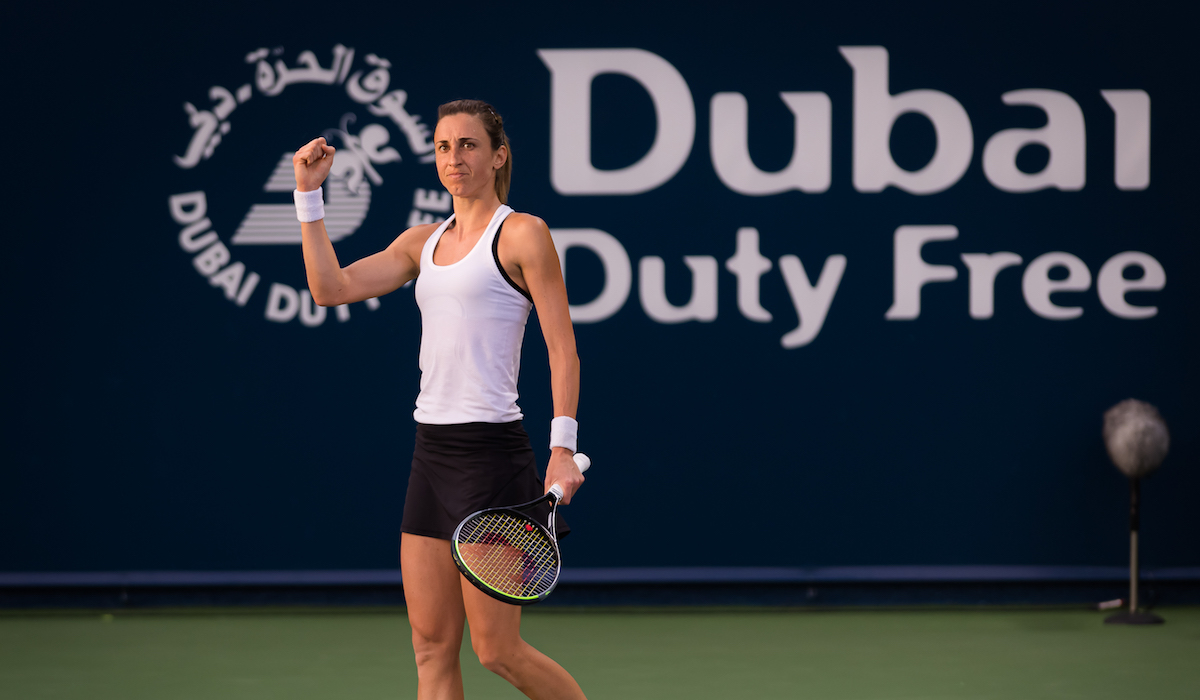 Martic will now face Elena Rybakina, conqueror of Garbine Muguruza and Sofia Kenin in her first semi-final of the year.

“I’m really happy with how I played today, it was my best match this season,” said a happy Martic afterward. “I think it’s my best shot in general, I think it’s how I play it, especially today I think the conditions really suited my game and it worked out. I’m really enjoying myself, I came here without any pressure just really trying to have fun on the court and it’s been working out well.”

“It was my best match this season.”

Petra Martic is pleased with the performance that put her in the #DDFTennis semifinals! pic.twitter.com/2NKOcIq17R

A double fault wasn’t the best of starts for Martic, and with Kontaveit stepping in and blistering successive winners, the Estonian had an early look at three break points.

Martic was quick to try to throw Kontaveit off her rhythm with looping topspin forehands and knifed forehands but the Estonian grabbed her third break point with another backhand winner to take the early initiative. It didn’t last long, however, the eighth seed breaking straight back with a sublime volleyed winner.

Martic’s career has been beset by injury since she broke into the top 100 way back in 2009. But now moving well and with experience on her side, the Croatian drew level at 3-3, mixing up play beautifully with successive drop shot winners from deep in the court.

Contrasting styles often make for intriguing matches, and the variety and guile of Martic versus the flat power hitting of Kontaveit was certainly that, the Croat attempting to manoeuvre her younger opponent around the court.

The tactics rewarded a first break point but more power from the other end slammed that particular door shut, two clean winners and an ace redressing the balance.

It was a close opening set that would be decided by fine margins, and with Kontaveit continuing to go for her shots come what may, it was a tough puzzle for Martic to solve.

Although not quite as eccentric in variety as Italians Francesca Schiavone or Sara Errani, Martic was mixing up her play beautifully with slices and drops, opening up the court for easy put aways. One drop shot too many meant that 40-0 turned to set point Kontaveit, but a beautifully played drop volley led to a hold and a fitting tie breaker.

It would turn into a microcosm of the set, punch and counter punch, mini breaks cancelling one another out until a regulation mid court forehand miss from Kontaveit handed the initiative to Martic, who accepted the invitation by holding her serve for the set.

Into the start of the second and a different tactic of net rushing from Martic to give Kontaveit something else to think about. And with Kontaveit now missing with regularity, Martic grabbed an immediate break to take control of the match.

Despite struggling with her ball toss throughout, a 3-0 lead looked enough to have got the job done for the Croat. After a pep talk with coach Nigel Sears, Kontaveit regrouped to stave off another break point, and when Martic threw her racket to the ground at handing a break point with a double fault, the tide looked to be turning back.

She didn’t remain flustered for long, a delightful half volleyed drop shot winner from almost behind her, restoring her confidence. Two games later, it was over, Kontaveit’s spirit broken by a delicious variety of spins, slices and sound tactics.

Martic’s reward is a meeting with Elene Rybakina, another match of contrasting style that should again provide great entertainment.

“A young player coming up, she’s been playing really well this season. I haven’t watched her match but it’s going to be some really hard hitting and I have to be ready to run some, so I hope I’ll be ready to do so.”