Kenin, from Russia with love

The last American tennis wonder is amongst that generation that has Anna Kournikova and Maria Sharapova to thank. Sofia Kenin and her parents went for this specific American dream and it’s now paying off. On Saturday, Kenin impressively won her first Grand Slam final. 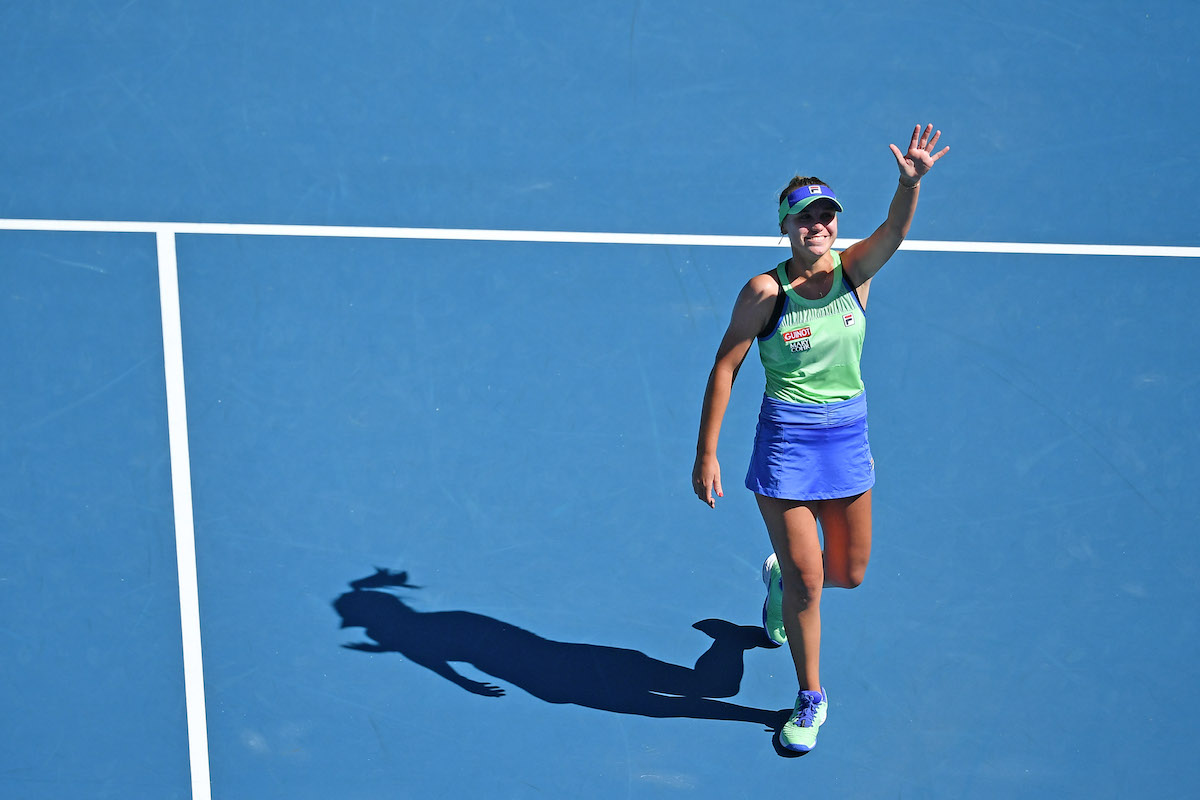 Looking left and right, between tears and laughs, Sofia Kenin was in total disbelief. Yet a few minutes before she had played with an iron-made determination to beat Garbine Muguruza (4-6, 6-2, 6-2) in the Australian Open final. Foot stomping, fist-pumping: she played the last two sets like we’ve rarely seen anyone do it. Out of anger, out of the purest of fighting spirit, she hit winner after winner, out of this world shots after out of this world shots.

After short points, after long points: whatever. A tornado of tennis skills and will power. But when the moment came to get her trophy, while she was waiting near a Muguruza crushed to the chore, she couldn’t believe it, and so was back to be the 21 years old without any experience of such a big win. Sofia Kenin: nice and fresh off the court, fearless and fierce on the court.

She’s the one very few thought of when picking the finalists of the event when the draw went out. As she was the one very few put up at the top of the list of the next big things for US tennis. But Sofia Kenin has taken the lead of the next generation of American tennis, more committed than Sloane Stephens, less injury-prone than Madison Keys, more mature for now than the younger Amanda Anisimova and Coco Gauff.

And she did it as if it was the most natural thing in the world. She’s not the tallest, not the most powerful, not the most fascinating temper but her tennis is like her on-court mindset: feisty. People searching what her best weapon is, often land on the same one: her fighting spirit.

“I’m very focused, very aggressive. I’m gonna stay out there for hours if I have to, I’m not gonna let you just beat me. I’m hard on myself, which is good. If not I wouldn’ be where I am today”, she told the WTA last summer. She’s in the “think positive” team, with iron-like confidence in herself, as she explained after the semi-finals. “I believed I could win even though I had two set points down in the first and second. I could literally feel, I was telling myself, I believe in myself. If I lose the set, I’m still going to come out and believe.”

It’s not the first time that the Russian crosses the American’s path in a funny way. In 2017, it’s her match against Sharapova in the third round of the US Open that made her decide to forget the College option and turn pro.

“I was a straight-A student but then I add to decide… It made it easier! She’s a great example for me. The way she fights, that’s where I got that from.”

She actually got this whole destiny thanks to the like of Anna Kournikova and Maria Sharapova, who reached stardom, fame and wealth by leaving Russia for the USA. Kenin’s Russian parents decided when she was a baby that they had to change her life and move her to the United States.

What Sharapova achieved, it was always the goal”, said Kenin’s father and coach, Alex. “We’re really proud of Sharapova: she has the same heritage, the only difference is that she didn’t turn American, but Sonya did.”

On Saturday, Kenin was yelling on top of her lungs some “Come on, Fight!” that sounded a lot like the Sharapova classic “Come on, Maria, Fight!” with the same fist pump and side-eye. 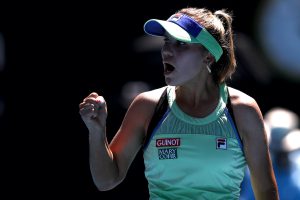 The similarities go to the naming actually: Maria Sharapova’s real surname has always been Masha but she changed it to Maria when she discovered her school mates were unable to say it correctly, calling her Marsha which she hated.

She went officially for Maria from then on, but in private she’s still very often Masha. For Kenin who goes with Sofia officially, it’s Sonya in private. People can call her both ways, she doesn’t seem to mind:

“It’s just a nickname for her, like Bob for Robert”, he said again on Friday in a small press gathering. “My parents brought me in America to play tennis and I’m really thankful for that”.

She started tennis at 4 years old, after a very short stint in soccer, and it was love at first sight. She was so good and so cute with her big blue eyes that soon enough she was invited to exhibition matches and charity events with the professionals, crossing Kournikova on some.

“She probably was more famous than what she is now”, said her dad last July. Asked why her daughter, like Sharapova, Kournikova, Anisimova and many others with Russian heritage are such great tennis players, he smiled: “The root, it’s tough”. So tough that next Monday her daughter will be the youngest American to reach the Top 10 since 1999.

When others with more weapons in their games are full of doubt, Kenin comes out there like David telling Goliath he’s about to go down. Sure, she has an astonishingly good sense of the game and a very unusual way to play: she keeps using cross-court backhands and forehands to oust her opponents from the court, just to nail them on the open space or with easy volleys. She hits cross-court backhands as if it wasn’t one of the toughest shot in tennis, and even under huge pressure. And boy does she run. Never going away, rarely making mistakes: she’s daring her rivals to break her down.

But even all of this doesn’t explain her fourth round at Roland-Garros last year and surely not her final in Melbourne. She got the best of the World No. 1 Ashleigh Barty on Thursday by being so much stronger mentally. And by spending two sets in her face, and in everybody in the crowd’s face. She did the same to Muguruza

She will fist pump, she will yell, she will sulk, she will be angry: she will be absolutely annoying for everyone to see and for hours as long as in the end she wins.

Some have poker faces, some need to put their soul outs. Kenin has zero poker face, zero awareness of how her on-court behavior can be a pain sometimes and actually, for now, nobody minds! Because off the court, she is a nice colleague because none of her on-court antics come with any ill-feeling.

She’s just this ball of energy and desire to win. The antics are a show of how much she cares. Still, let’s see how more wins it’s going to take crowds and other players to start complaining! 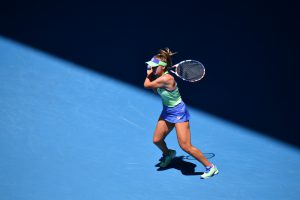 Last year, Kenin was tied with Barty for most hard court wins on Tour (38-16) and she has now beaten three times a reigning No1 (Barty in Toronto and Osaka in Cincinnati last year). So yes her presence in a Grand Slam final is a legit surprise but it’s also not a miracle at all.

When she was 5 years old, she had this answer as to why she was playing tennis: “I want to be a professional tennis player to be a champion and to be number one in the world”. And as of today, she still wants this and nothing else:  “I understood everything at that age. And now the goal is here with that Grand Slam of course.”

But the pressure of the attention, surely she starts to feel it no?

“I know people haven’t really paid attention much to me in the past. I had to establish myself, and I have. Of course, now I’m getting the attention, which I like. Not going to lie. My phone is blowing up these past two weeks. I haven’t been able to check normally my Instagram, Twitter, everything. It’s blowing up. I love this attention. I’m enjoying every single moment of it.”

She didn’t go through the sacrifices her parents, but they’ve told her about all of it, so Kenin knows how tough the journey has been and that she doesn’t have reasons to be complaining of the pressure of being a Grand Slam finalist now.

“It took us eight years to find a way to leave the Soviet Union. Then in the US, I was studying computer science in the morning, then was a driver in the evening, barely understanding English. She knows what it took, she knows why she’s doing this.”

To win, everything, always, so the dream proves worth it.

“Go for your dream, make them come true!”, she told the crowd after the biggest win of her career. Now, she’s going to be off to the second dream on her list: the throne. She’s No 7 after that title, but it’s still not what she desires the most.