Roger Federer lost to Jiri Novak on his Wimbledon debut 20 years ago, but now he is the tournament’s greatest men’s champion with 100 wins. 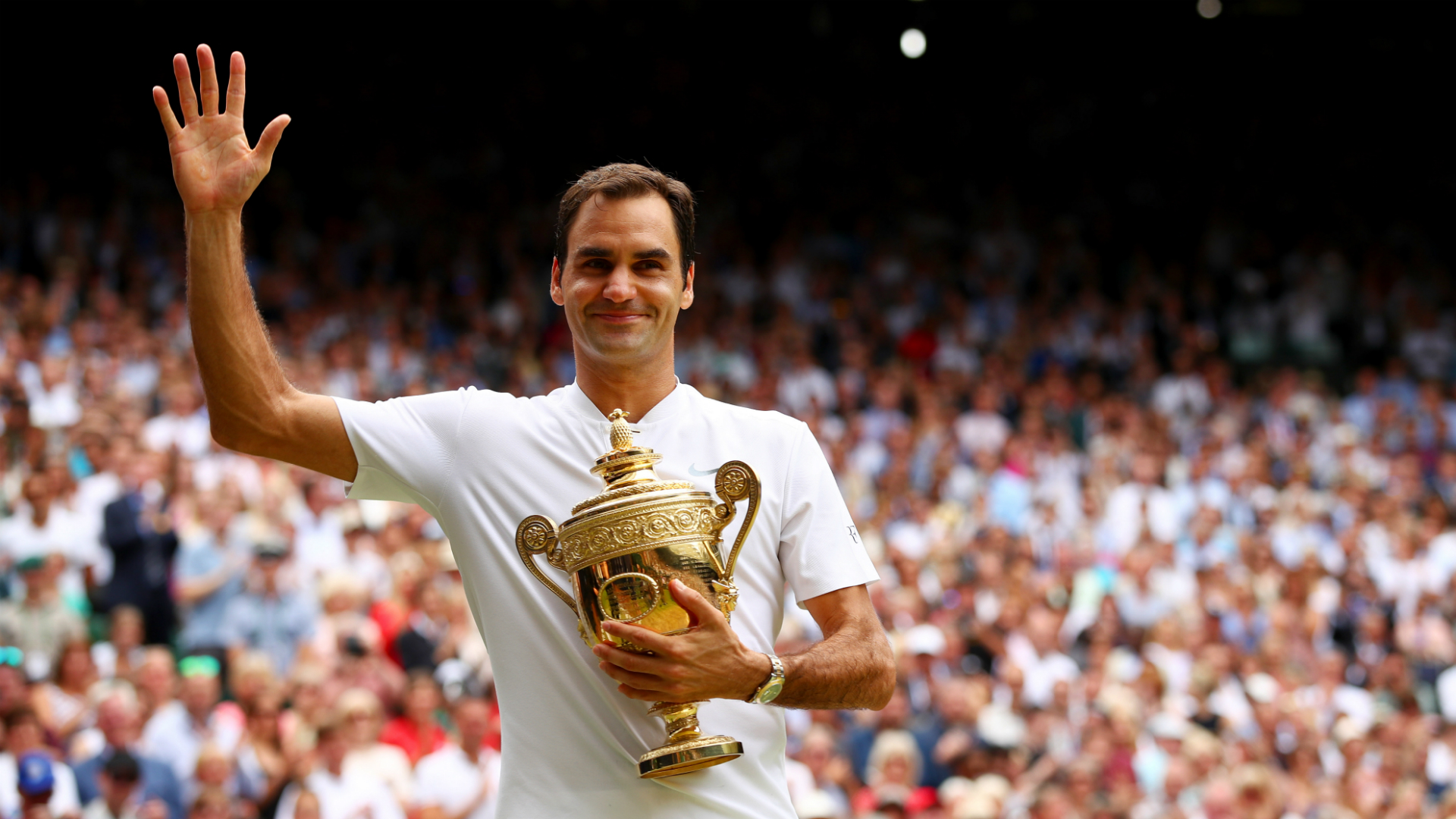 Roger Federer became the first man in the open era to win 100 singles matches at a grand slam when he battled past Kei Nishikori to reach the Wimbledon semi-finals.

The Swiss great lost in the opening round on his first two attempts at main-draw success at SW19 before coming good in style, landing five titles in a row from 2003 to 2007.

Further trophy triumphs followed in 2009, 2012 and 2017, seeing him go past Pete Sampras to become the most prolific winner of the men’s singles at the championships.

After bringing up a century of wins, we look at five of Federer’s most memorable triumphs at the All England Club.

Anyone looking at the transitions between tennis eras would see this result as a pivotal moment between the reigns of Pistol Pete and King Roger. Sampras won his seventh Wimbledon title in 2000, but in a marathon clash 12 months later he came unstuck against the emerging Swiss. Sampras had won the four previous editions of the men’s singles at Wimbledon but he would never dominate again at the All England Club. Federer lost in the quarter-finals to Tim Henman, who would then famously be beaten in the last four by eventual champion Goran Ivanisevic. Federer eventually got his hands on the trophy in 2003 and would go on to overhaul Sampras’ record.

Fed said: “Sometimes it was weird. I looked on the other side of the net, I saw him. Sometimes I was like, it’s just true that this is happening now, that I’m playing against him. But then it just goes away, this feeling. You think about your serve, where you’re going to go, then it’s like playing against maybe some other player, you know. But obviously it was something special for me to play Pete.”

Everyone has a favourite Wimbledon memory – what’s yours?

The rivalry between Federer and Nadal was blossoming, and this was the second successive year they had contested the Wimbledon final. What was apparent was how much closer Nadal was coming to Federer’s level on grass, having already more than gained his measure on clay. Federer won this time, taking a captivating to-and-fro contest that lasted three hours and 45 minutes. It gave him a fifth successive Wimbledon title, matching the tournament’s open era record set by Bjorn Borg, who watched from the Royal Box. A year later, Nadal would take his revenge in Wimbledon’s greatest men’s final, another five-setter.

Fed said: “I haven’t lost many best-of-five-set matches lately. I knew that was a big occasion, maybe the biggest occasion of my life so far on a big stage. I was very happy to come through as the stronger.”

Was this vintage Federer? Certainly not. He could not find a way through on the Roddick serve until the match’s denouement, when the American cracked. But what a startling match it proved to be, with Roddick playing as well as he ever would at Wimbledon yet still finding his best was not enough to master the master. A third final defeat to Federer would be his last grand slam title match, but Roddick came so close, despairingly so as the marathon fifth set became unbearably tense, that it was impossible not to sympathise. For Federer, it was a record-breaking 15th grand slam win, beating Sampras’ haul.

Alejandro Falla’s Wikipedia biography leads with his career highlights being victories over Nikolay Davydenko and Tommy Haas. It must torture the Colombian left-hander not to have Federer’s name up there, after he went so close to stunning him in the first round at Wimbledon. Federer had beaten Falla for the loss of just three games in the second round six years earlier, but their second meeting in London was a different story, Falla racing to a two-set lead. Heads were shaking in disbelief around the grounds, and Falla had the match in his hands when he served at 5-4 in the fourth set. It slipped through his grasp, Federer with a great escape.

Fed said: “I wasn’t able to read his serve. That really rattled me. So I had to look for that for a long time. Thank God I found it eventually. I definitely got lucky. But that’s how it goes sometimes.”

Murray was bidding to become Britain’s first male grand slam singles winner since Fred Perry, and when he took the opening set it looked like a rare home win was in the offing. But Federer hushed the Scot’s Saltire-waving fans with a stirring fightback under the Centre Court roof to land his record-tying seventh Wimbledon success. Murray was in tears but would take his revenge in the Olympic Games final at Wimbledon later the same year, denying Federer the singles gold he craved.

Fed said: “I know the occasion and how big it was for Andy and myself. I’m happy I got a victory today, but obviously it was very, very special. Today I’m sure he got another step closer to a grand slam title.”

Up next is this sublime drop shot, carved to perfection in the 2012 final against Andy Murray #Wimbledon pic.twitter.com/HEragMupr8