Elena Rybakina followed up her victories over Sofia Kenin and Karolina Pliskova by beating eighth seed Petra Martic 7-6, 7-6 in a high-quality semi-final at the Dubai Duty Free tennis championships. 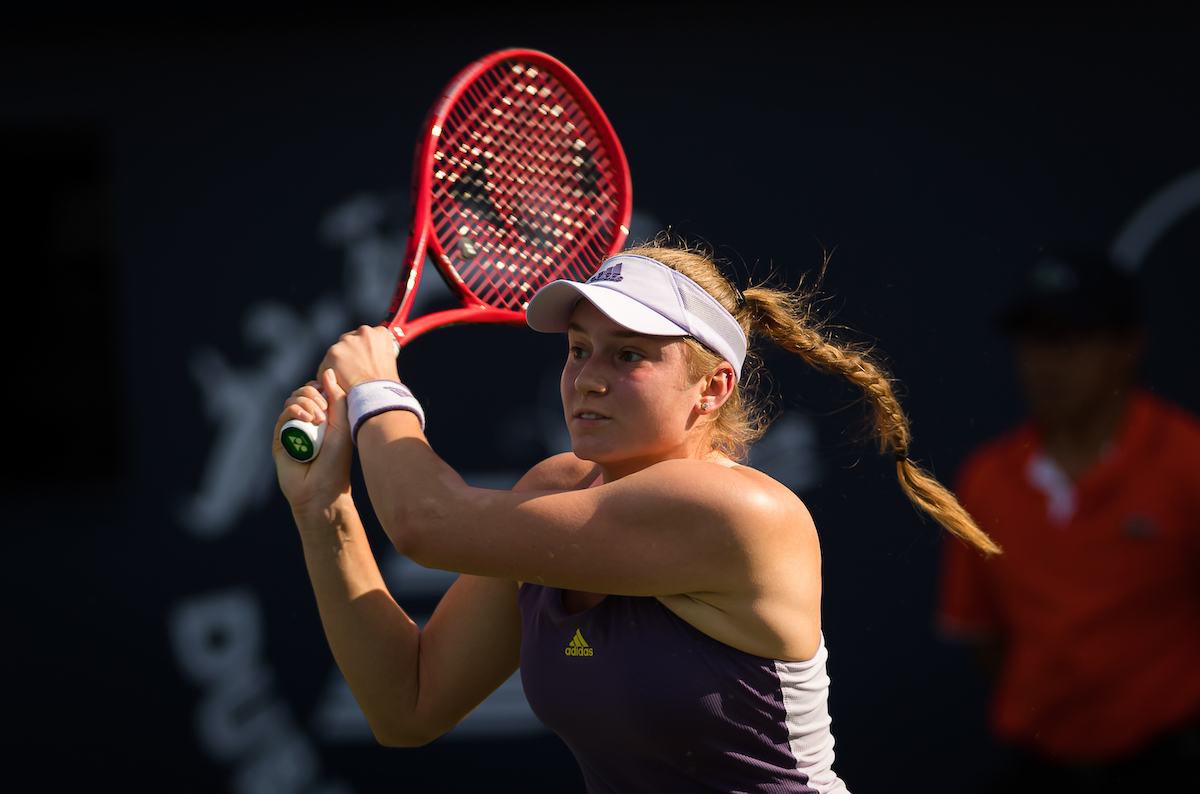 The Kazakh, who has won 19 matches this year already and made four finals, again had to dig deep and saved set points in both sets before finally emerging victorious. She will face Simona Halep in the final on Saturday.

“It’s amazing, I just focus on every point because it was a really tough match and she played really good so I just try to work every point and see what happens,” said Rybakina after the match.

“I just want to win and my coach helps me a lot and I had nothing to lose in this tournament. Today, of course, it’s semis and I wanted to win so much. Even when I was down 3-0 I wanted to win this set.

“I had an unbelievable year in 2019 and I was just trying to do the same, but I did even better so hopefully I can keep going like this.”

4️⃣-0️⃣ in semifinals this year!

Martic sliced and diced her way to a wonderfully entertaining victory over Anett Kontaveit on Thursday and started the way she ended, with a delightful drop shot winner.

It was a nervy start from Rybakina, throwing in an early double fault and hitting long to gift two early break points to Martic, converted at the second attempt with a wicked slice to feet that the Kazakh couldn’t control.

Rybakina came into the match with a 3-0 record in semi-finals this year but had never in her career faced such variation thrown at her from the other side of the net. It took a while for her to settle, having to generate her own pace for much of the time.

But settle she did, taking her fourth break point on the Martic serve with a trademark booming forehand winner into the corner.

Martic is used to fighting power with guile, as she did so effectively during her quarter-final victory over Kontaveit. It allowed her to break again in the third game but only after a lovely piece of sportsmanship on her previous break chance, allowing Rybakina to replay the point after the Kazakh stopped, thinking she had heard a let.

Standing six-foot-tall and with rangy limbs, Rybakina possesses what some in the tennis trade call ‘easy power’. At 3-1 down in the opening set, hitting herself back into the game was exactly what was required and, after a fabulous 21 shot rally went the way of the Kazakh, she pulled out a gutsy hold, saving four further break points.

Both players decided to call upon the advice of their respective coaches at exactly the same time, but the advice offered to Rybakina to take the ball early and hit flatter seemed to have the desired effect, breaking back for 5-5 as Martic served for the set.

It was a big turning point, Rybakina carrying momentum into the tie break to take it 7-5 with some confident ball striking. It was a quality set of tennis between the players in their first meeting, only five places separating them in the WTA Tour rankings

Martic hadn’t lost a set all week up to this point but would now have to try and win the match the hard way. The comeback started in the second game of the second set, the Croat breaking to 15 as her opponent’s intensity dropped. What commentators colourfully refer to as an ‘adrenaline dump’.

Suddenly, it was Martic who could do no wrong, fashioning a further chance for a double break and 4-0. It was a chance she couldn’t take and with the call for more energy from coach Stefano Vukov ringing in Rybakina’s ears, the Kazakh broke back to level the set.

Nice work at the net from Elena Rybakina 👌#DDFTennis pic.twitter.com/NH2Fr0P4pq

As with the opening set, the second would go down to the wire, the players exchanging drop shot winners as the standard continued. Almost inevitably, the set would be decided on another tie break.

Just when it appeared that the Rybakina energy was dwindling, the Kazakh dug deep into the reserves, Martic missing an easy overhead to put herself in deep trouble at 4-1. And with Rybakina sensing the finish line, the end was swift, a disappointingly one-sided end to a match that had entertained so much.

Next up for Rybakina in Saturday’s final is a meeting with either top seed Simona Halep or comeback Queen Jenifer Brady.

“They are great players and of course it’s going to be a tough match. I will try to watch and rest and be ready for tomorrow,” she added.

Elena Rybakina finishes a great rally at the net!#DDFTennis pic.twitter.com/LUf3TIWcYV