Every day, Tennis Majors takes you back to look at the some of the most memorable moments in tennis history. On this day in 2006, Andre Agassi’s career came to an end in front of the US Open crowd that had carried him through all his ups and downs 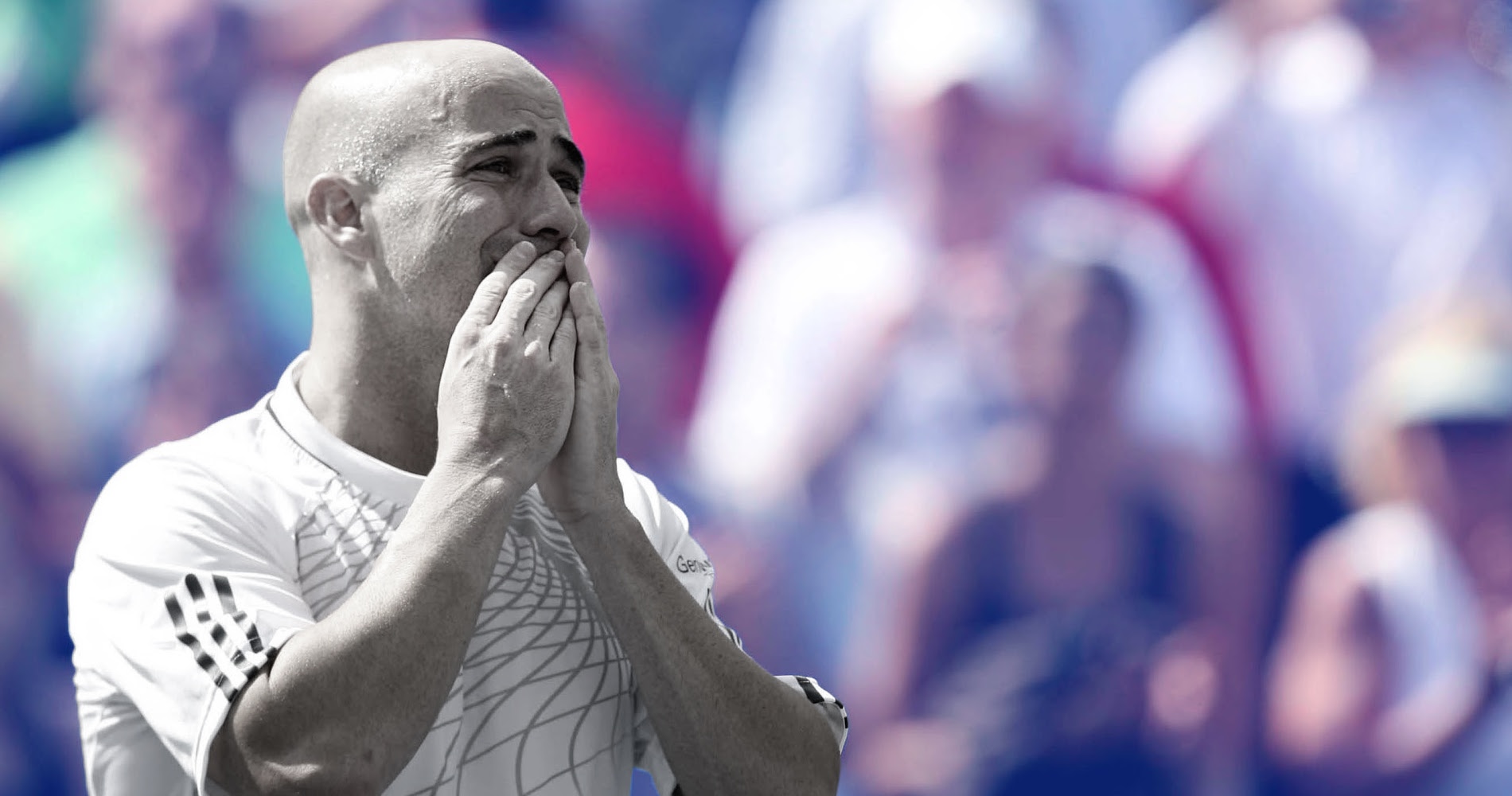 On this day, September 3 in 2006, tennis legend Andre Agassi played the final match of his professional career in the third round of the US Open, defeated by qualifier Benjamin Becker (7-5, 6-7, 6-4, 7-5). The eight-time Grand Slam champion had lost too much energy fighting an epic battle against Marcos Baghdatis in the previous round (6-4, 6-4, 3-6, 5-7, 7-5). Agassi, who had already announced that he was going to retire after the US Open, gave an inspiring speech before waving goodbye to the crowd at the Arthur Ashe Stadium.

Andre Agassi; who was known as the ‘Las Vegas Kid’ when he started off on tour, was a tennis legend. He had turned professional in 1986 and had soon become one of tennis’ biggest superstars; that was thanks not only to his amazing tennis skills but also due to his interesting outfits, including the iconic denim shorts and the pink bike shorts (worn as an underlayer). Taught by his father and bred at the Nick Bollettieri Academy, Agassi’s game relied on a great return (the best of its time) and on hitting the ball on the rise on both sides with incredible power, which was revolutionary at the time and then copied by generations of players.

In 2004, after playing an epic five-set semi-final at the Australian Open which he lost to Marat Safin (7-6, 7-6, 5-7, 1-6, 6-3), injuries prevented him from performing at his best; back pain ruined his French Open campaign and also forced him to withdraw from Wimbledon. He managed to stay in the top 10 at the end of the year after reaching the US Open quarter-finals. In 2005, Agassi claimed his 60th and final title on the ATP Tour in Los Angeles, beating Gilles Muller in the final. At the US Open, he achieved his last outstanding performance, finishing runner-up to Roger Federer, only losing after four sets of high-level tennis (6-3, 2-6, 7-6, 6-1). Agassi would finally exit the top 10 only in 2006. Bothered by injuries, he attended only eight tournaments before the US Open.

Benjamin Becker was born in 1981. The German attended college for four years at Baylor University in Texas before turning professional. Leader of the local team, the Baylor Bears, Becker won the NCAA singles title in 2004, a title that had earlier won by great players such as John McEnroe and Jimmy Connors. After his graduation, he turned pro in the second half of 2005, finishing the season as world No 477. In 2006, after he obtained great results on the ATP Challenger Tour, he played his first ATP match in Halle (defeated by Tomas Berdych, 6-4, 6-3) and made his way out of the qualifying draw to make his Grand Slam debut at Wimbledon (beaten in the second round by Fernando Verdasco, 6-4, 6-7, 4-6, 6-3, 9-7). When he arrived at the US Open as world No 112, it was to play the qualifying event again.

The US Open (known as the US Nationals before the start of the Open Era in1968), was established in 1881 and although it is the only Grand Slam to have been played every single year without an interruption since its inception, it had moved locations several times throughout the 20th century. First held in August 1881 on grass courts at the Newport Casino on Rhode Island, the tournament moved to New York in 1915, where it was held at the West Side Tennis Club at Forest Hills until 1977 (with the exception of years 1921-1923, when the event was held in Philadelphia). At Forest Hills, the Center Court built in 1924 could host 14,000 spectators.

In 1978, the US Open left the West Side Tennis Club, which was now too small for such an important event, for the USTA National Tennis Center located in Flushing Meadows, New York. The National Tennis Center was one of the biggest tennis complexes in the world: its Centre Court was the Louis Armstrong Stadium, which had a capacity of 14,000 spectators. In 1997, a new Centre Court, the Arthur Ashe Stadium, was inaugurated. With 23,000 seats, it was the biggest tennis arena in the world. The USTA continued to innovate in the following years and in 2006, the US Open was the first tournament to use Hawk-Eye technology, allowing players to challenge line calls.

The facts: Agassi runs out of fuel after Baghdatis epic

When Agassi arrived in New York to attend the 2006 US Open, he had already announced that it was going to be the final tournament of his long and incredibly successful career. He had chosen Wimbledon, where he had claimed his first Grand Slam title in 1992, to make his decision public.

“I think there’s a lot of factors,” Agassi said at the All England Club, as reported in The New York Times. “It’s starting with my family, starting with what it takes to be out here and compete on this level. I have to make sure I approach this through the sense of what’s best for who I care about the most and what is best for me. We sort of waited until now to say something, because it’s only right that I say it in the place that it all started.”

In the third round, facing Becker (not related the more famous Becker from Germany) , who had qualified into the main draw, Agassi simply had no fuel left. Three anti-inflammatory injections into his back didn’t ease his pain. Even Becker’s coach, Tarik Benhabiles, quoted by The New York Times, saw that the eight-time Grand Slam champion was a mere shadow of himself: “It looked to me like he was about 40 percent of normal. But I admire him for going out there and trying.” Serving an ace on the match point to seal his victory (7-5, 6-7, 6-4, 7-5), Becker ended the career of one the most iconic tennis players of all-time.

Before leaving the arena for the last time, Agassi was handed the microphone, delivering a short but memorable speech.

“The scoreboard said I lost today. But what the scoreboard doesn’t say is what it is I have found. Over the last 21 years, I have found loyalty. You have pulled for me on the court and also in life. I found inspiration. You have willed me to succeed, sometimes even in my lowest moments. And I’ve found generosity. You have given me your shoulders to stand on, to reach for my dreams, dreams I could never have reached without you. Over the last 21 years, I have found you, and I will take you and the memory of you with me for the rest of my life.”

What next? Agassi reflects on his connection with New York

Agassi was the last of among the great generation of American players who burst on to the scene in the late 1980s to retire after Sampras, Jim Courier and Michael Chang, who had all won at least one major singles title. In the middle of this golden generation, the Las Vegas-born left his own indelible print on the sport, thanks to the ups-and-downs in his career, and also because of his evolution as a player and a human being during his career.

“He’s a guy who has given a lot to the game and who grew up in front of all of us,” his former coach Brad Gilbert would sum up. “People remember him with the long hair and the attitude, but he grew to be an ambassador, maybe the best the game has seen.”

“It really brought together what it’s all been about from the beginning, which is people and connection,” Agassi would explain 10 years later in an interview reported by The New York Times. “And it put everything into perspective: the ups, the downs, the successes, the failures, the triumphs, the comebacks. I not only grew up in New York, but New York helped me grow up. So when all of a sudden it was over, and there was that raw emotion, it made me realize how connected we’ve all been over the years. And I’ve got to say, I look back on that moment as probably the best moment I’ve ever had on a tennis court.” 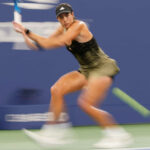 Read also
Are the courts at Flushing Meadows faster than ever? The puzzle impossible to solve
Tennis Majors
Share this story
Facebook Twitter Linkedin Whatsapp Email