US Open Day 5 recap: A wild day, a late night, and an early morning

Adrian Mannarino was the unexpected big story of the day at the US Open Friday. But some on-court drama developed much later. 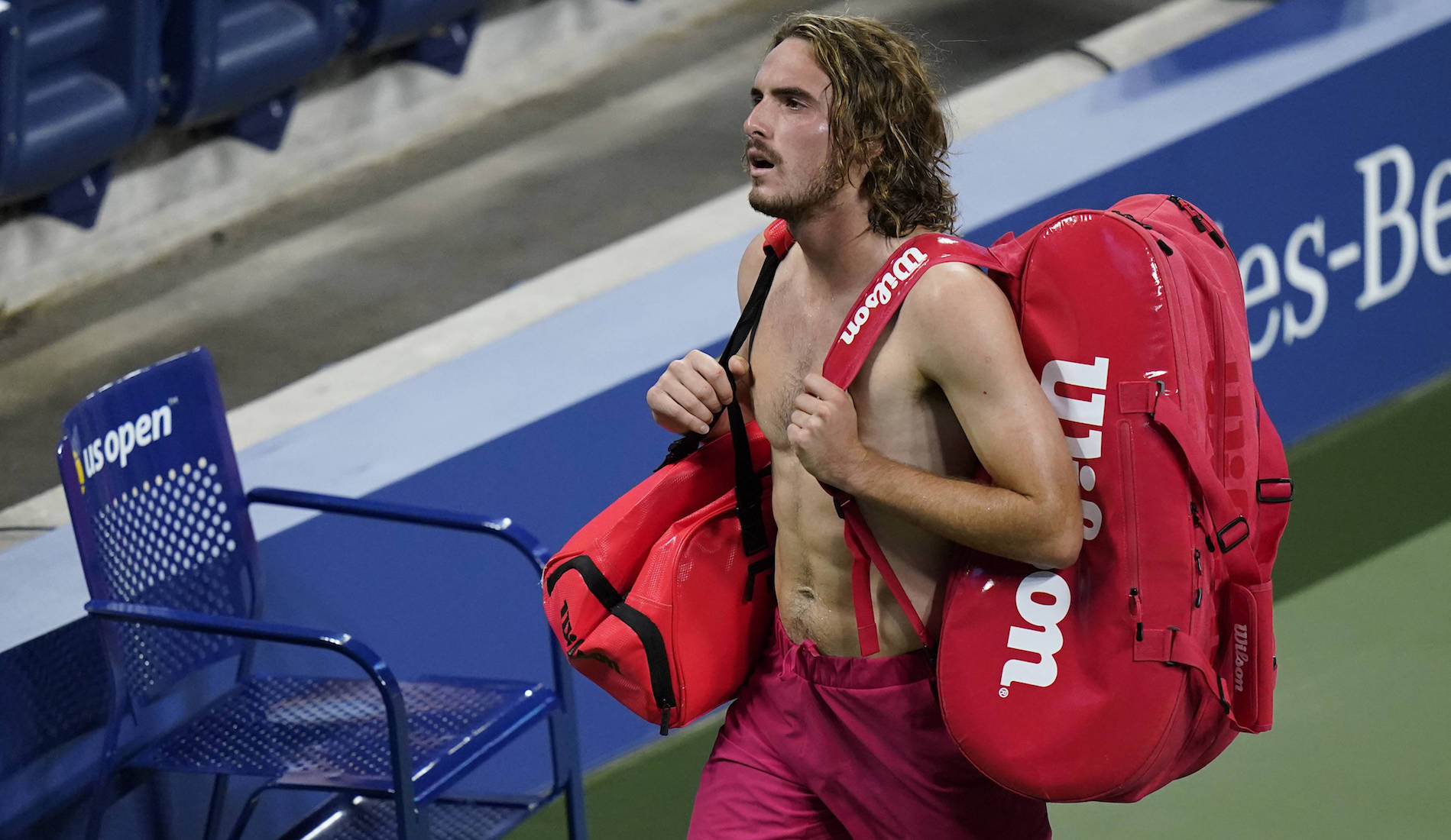 There was at least some on-court drama at the US Open on Friday (thank you, Denis Shapovalov, Taylor Fritz, Stefanos Tsitsipas, and Borna Coric!). For the most part, however, the biggest news was generated off the court. Was Adrian Mannarino going to play his third-round match against Alexander Zverev or not? That was the big question for about three hours during the afternoon.

Mannarino ended up playing, but his tournament soon came to an end anyway. Zverev won in four sets to join the likes of Shapovalov, Tsitsipas, and Naomi Osaka in the second week of the season’s second Grand Slam. Coric had to wait until well after midnight (after 1am, in fact!) in order to punch his fourth-round ticket.

The woman of the day: Three masks down, four to go

As everyone knows by now, Naomi Osaka has seven masks ready to go in case she makes it all the way to the final. She has already needed three. Her third one for her third-round match on Friday had Ahmaud Arbery’s name on it.

It was not always a sure thing that Osaka would need a fourth mask. Marta Kostyuk, only 18 years old, had the 2018 US Open champion on the ropes but eventually succumbed 6-3, 5-7, 6-2.

“I think it was just experience,” Osaka said following her two-hour and 33-minute victory. “I know [Kostyuk] is very young and I’ve probably had more matches like this. She’s really good. I’m kind of scared how good she’s going to be in the future.”

The good news is that he at least got to play his match on Friday — which did not always look like it would be the case. The State of New York was prepared to force Mannarino to withdraw from the tournament because he is one of the the ‘Paire 11’, the group of 11 players who came into close contact with Benoit Paire (who tested positive for Covid-19 last Sunday). Eventually, the Frenchman was given the green light to play and the match began almost three hours after it was supposed to start.

“I was aware of what was happening,” Novak Djokovic said after defeating Jan-Lennard Struff 6-3, 6-3, 6-1. “I was actually contacted by his coach during that process. I was communicating with his coach for a few hours actually, trying to help. I was speaking with ATP, trying to get more information from the tour managers. I was also trying to get to the people that are in the highest positions in New York state through some of the contacts, trying to get to the governor of New York. I understood that he was the only one that could actually make the decision to revert the decision that Mannarino was withdrawn from the tournament. In the end, to be honest, I don’t know what exactly happened. They just told me that finally Adrian was allowed to play and he was on the court, which I was very pleased to see.”

The match of the day: The comeback kid

Taylor Fritz led Denis Shapovalov by two sets to one and 5-2 in the fourth set, one game away from his first-ever appearance in the fourth round of the US Open. But Shapovalov, who was playing in the third round of a fourth consecutive US Open and aiming for a second trip to the last 16, was not about to go away without a fight. The Canadian held for 3-5 in the fourth, broke serve to stay alive, held again for 5-5, and was off to the races. He eventually took set four in a tiebreaker and went on to stun the American 3-6, 6-3, 4-6, 7-6(5), 6-2 in three hours and 26 minutes.

Of course, it was not all fun and games the entire way for Shapovalov. After he lost the third set, it is safe to say the 21-year-old was not happy.

This is what the #USOpen does to a person.

Epic performance by a phenom in @denis_shapo to take the win in the 5th. Funeral arrangements for that racket have been made. pic.twitter.com/ey9TBuxa9u

The big surprise: McNally still in singles, out of doubles

Caty McNally and Coco Gauff are best friends, doubles partners, and rising stars on the women’s singles circuit. At this point in the tournament, you might expect Gauff to still be alive in the singles draw, the Gauff-McNally duo (“McCoco,” as they are called) to still be in doubles, and McNally to be out of singles. Based on recent history, that would be the expected outcome.

Instead, Gauff is out of singles (lost to Anastasija Sevastova in the first round), McCoco fell in the second round on Friday evening, and McNally is making run through the singles draw. The 18-year-old won her rain-delayed match against No 21 Ekaterina Alexandrova 4-6, 6-3, 7-6(2) on Friday afternoon.

The picture of the day: Twins!

Nike’s Andre Agassi-esque clothing line has been all the rage in the bubble, starting at the Cincinnati Masters and continuing with the US Open. Shapovalov is one of the many who are putting it on display.

And Agassi, himself, is apparently paying attention.

The quote of the day: Bubble all the time

Corentin Moutet may not seem like an introvert on the court (he certainly didn’t seem like it in his second-rounder against Dan Evans, which began on Thursday and was pushed back to Friday by rain). But you aren’t going to find the Frenchman out partying with Nick Kyrgios during tennis tournaments. Coronavirus or no coronavirus, Moutet is going to keep it cool.

Why have a bubble when you’re always in your own bubble, anyway?

“He on X-Games mode”

Corentin Moutet was all over the place today 🏎️💨

The point of the day: Late-night drama

Coric and Tsitsipas played well into the night – and even into the morning – in Louis Armstrong Stadium. Part of that had to do with the Zverev-Mannarino delay. Most of it had to do with, well, themselves.

They played for four hours and 36 minutes, about two hours longer than Tsitsipas would have wanted. The Greek led by two sets to one and 5-1 in the fourth before an improbable collapse coincided with a dramatic comeback. Coric saved six match points in the fourth set and went on to triumph in a fifth-set tiebreaker, winning 6-7(2), 6-4, 4-6, 7-5, 7-6(4). It ended at 1:09 am EST.

This was perhaps the best point of many, many entertaining ones.

Life behind closed doors: The dog days of summer

There are no people allowed at the US Open (well, no fans at least). But dogs? Bring ’em in! Anna Kalinskaya did exactly that on Friday, sitting in the front row along with her best friend to enjoy the infamous Zverev vs. Mannarino match.

Prior to taking the court, Zverev was once again spotted chilling in his Arthur Ashe suite – once again sans shirt. And he had plenty of extra time to work on his tan given the two-hour and 20-minute delay before Mannarino was finally allowed to take the court.

We are now into the realm of the tournament when seeded players can go head-to-head. And that is exactly what will happen in more than a few cases on what should be an entertaining Saturday at the Billie Jean King National Tennis Center. There won’t be any fans there to enjoy it, of course, but eating popcorn on the couch in front of the nearest television would be a good idea for any tennis fan when it comes to this line-up of matches. The following are some of the most intriguing Day 6 match-ups (and full order of play here):