Home » News » What will Djokovic have left in the tank for Raonic?

What will Djokovic have left in the tank for Raonic? 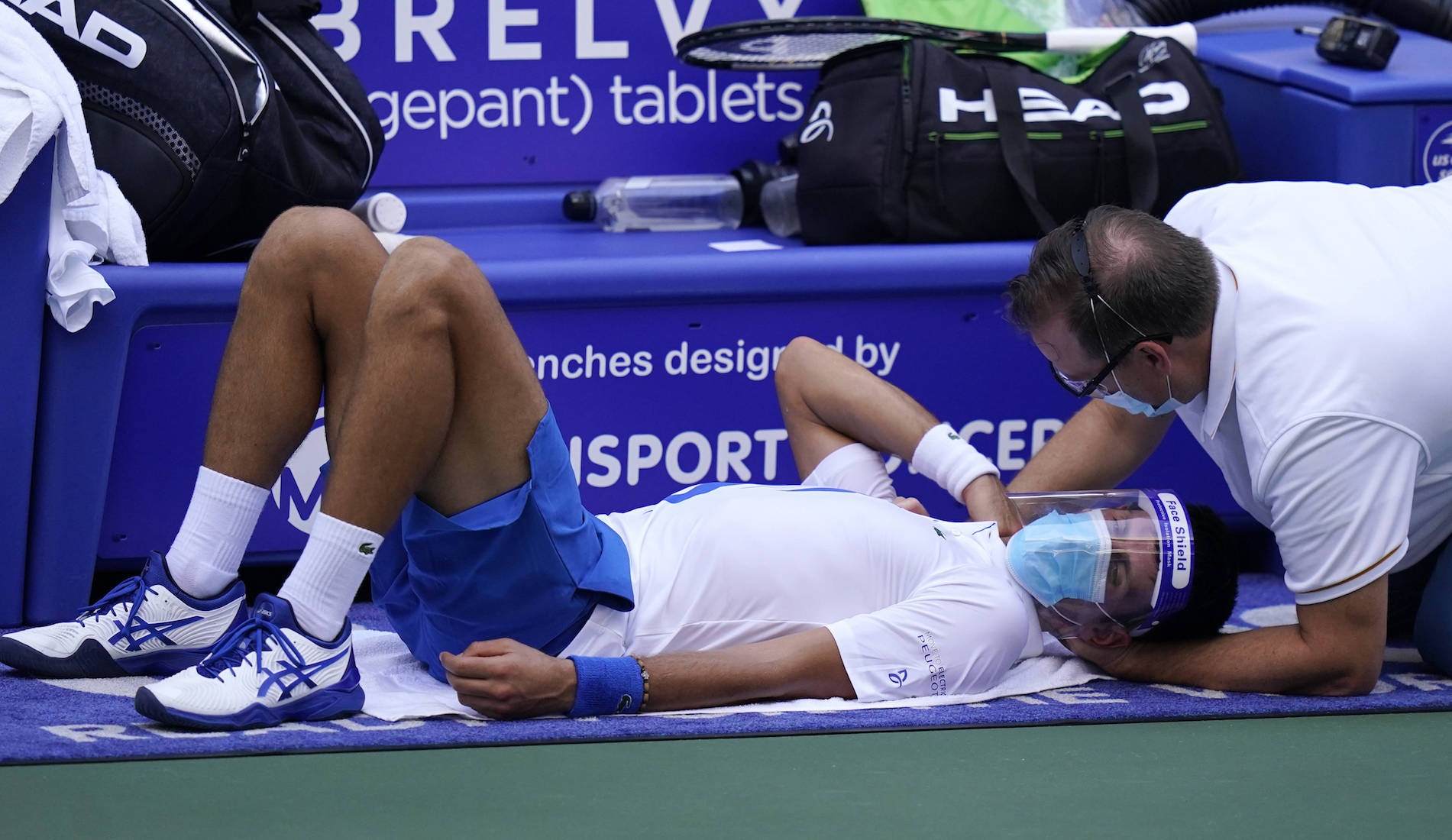 Novak Djokovic with the ATP physio

Friday was the penultimate day at the Western & Southern Open and it set the stage for a grand finale. Three of the four singles finalists on the men’s and women’s sides are Grand Slam champions (Djokovic, Osaka, Azarenka), and the other — Milos Raonic — is a slam finalist.

It will be Raonic vs. Novak Djokovic (1 p.m.) and Naomi Osaka vs. Victoria Azarenka (11 a.m.) on Saturday. Let’s take a look at how they got there….

The woman of the day : Osaka wins off the court, and on it

On Wednesday night, Osaka was out of the tournament – or so everyone thought. After the National Basketball Association’s Milwaukee Bucks took a stand against social injustice and boycotted a playoff game, other sports began to follow suit in protest. Tennis was no exception when Osaka announced that she would not play her semifinal match against Elise Mertens on Thursday. Not long thereafter, however, the tournament as a whole announced there would be complete halt to play on Thursday. With the schedule pushed back to Friday and her point having been made, Osaka decided to take the court.

It was on that court where the 22-year-old, whose father is Haitian and mother is Japanese, continued to make headlines. She held off a tough opponent in Mertens by prevailing 6-2, 7-6(5) after two hours and one minute of play.

She made her first ever @CincyTennis final 💪@naomiosaka moves past Mertens, 6-2, 7-6(5). pic.twitter.com/FbLCrcrP2i

“I guess after my quarters match I saw everything the NBA was doing,” Osaka explained. “Then I felt like I also needed to raise my voice, too. So I called Stu, my agent, and we talked it over. Then we called the WTA, and they said that they would love to support and they were going to push play back a day. So I put out my statement.

“I feel like this is where everyone gets confused, because I didn’t say I was going to withdraw from the tournament. I just said I wasn’t going to play the next day. And today is Friday, and when I posted it was on Wednesday. I think that’s where there was a bit of confusion. But, yeah, I feel like it’s been kind of hectic and I honestly haven’t been able to get that much sleep yesterday. So I’m glad I was able to win today.”

The man of the day : Raonic standing tall

To reach the Cincinnati semifinals, Stefanos Tsitsipas defeated 6’8” Kevin Anderson, 6’10” John Isner, and 6’11” Reilly Opelka. But Raonic, who stands at 6’5”, proved to be too much for the Greek. The 29-year-old Canadian blasted 12 aces and did not drop serve a single time while pulling off a 7-6(5), 6-3 upset after one hour and 37 minutes. Raonic has played five matches at this event and has played four of them without getting broken.

“I’m playing well,” Raonic assured. “I think I’m moving much better than I definitely have in recent years. Maybe it’s been a long time, and I think that’s putting me in better position so I’m able to be more effective and more aggressive earlier. I’m able to play more on my terms and quicker on in the points.

“I just kept training during the [hiatus]. You know, most of the time when we have stopped, you never really get more than four or five weeks. During this period of time I got six weeks three different times, so I just kept training and kept trying to use this as something to really make a difference in my game.”

The match of the day : Djokovic – Bautista’s becoming a real rivalry

It has to be said that many players are defeated before they even take the court against Djokovic. They simply know they have little – if any – chance. That certainly is not the case when it comes to Roberto Bautista Agut. Heading into Friday’s semifinal contest, Bautista Agut was a respectable 3-8 lifetime against the Serb and had won each of their last three hard-court encounters. In other words, this is developing into a real rivalry — which you don’t often get between a “Big 3” play and a non-Big 3 player. This latest Djokovic vs. RBA showdown only added to the intrigue of this head-to-head matchup.

The two baseline battlers needed three hours and a final-set tiebreaker in order to be separated. They took turns seizing break advantages in the third set before Djokovic finally prevailed 4-6, 6-4, 7-6(0) to reach a 51st Masters 1000 title match.

In exactly 3 hours, @DjokerNole persevered through the pain and closed out the match.

Djokovic prevailed despite dealing with a neck issue that has plagued him all week, an apparent stomach issue, and an inspired Bautista Agut. The world No. 1 struggled physically throughout the third set and he did not hold a press conference afterward because reports said that things got even worse for him from a health standpoint following the match.

What will have left for Raonic on Saturday?

Azarenka is a 31-year-old mother of one whose career peaked in 2013, but she clearly has a lot left in the tank. The Belarusian booked her spot in the Cincinnati final by overcoming Johanna Konta 4-6, 6-4, 6-1 on Friday afternoon. Azarenka converted five of her 10 break points to prevail in two hours and 18 minutes. Saturday’s championship match will mark the 38th time she has been at this stage of a WTA tournament.

Determined until the end.@Vika7 defeats No. 8 seed Konta 4-6, 6-4, 6-1 to book her spot to the Final.#CInCyTENNIS pic.twitter.com/5rKMrEz0QU

“I think it was a really good, high-quality match overall,” Azarenka assessed. “I think Johanna played really, really well. Especially in the first set, she was really taking a lot of chances, and some of the opportunities that I had I didn’t maybe go enough for them. But she was really, really strong. I felt that in the second set I was able to manage those opportunities better, step up a little bit. And then in the third set I felt like I was more in my pace and doing what I wanted to do, so I felt more comfortable.”

Daniil Medvedev had the day off after losing to Bautista Agut 1-6, 6-4, 6-3 in the quarterfinals. Unable to go into the city or even leave the bubble at all, it was a good day for the 2019 runner-up to peruse the internet. He apparently stumbled upon a Forbes article listing the highest-earning tennis players. Medvedev came in at No. 8 on the list…and he also came in looking a bit different. In fact, he came in looking a lot like Stan Wawrinka! And the Russian joked about it on Twitter.

Wow. I all of a sudden have an amazing looking backhand! 😜🤦‍♂️👍@Forbes pic.twitter.com/ZBaC9sdjwj

The quote of the day : Just win two sets

Azarenka battled into the Cincinnati final the hard way, needing three sets to outlast Konta. She decided to keep things a lot simpler in her press conference. The former world No. 1, who declined to answer questions about Osaka’s protest that led to Thursday’s pause in play, was very matter of fact when asked what it would take to win the final.

“I have to win two sets. Two of three sets.”

The stands were absolutely packed for the Djokovic vs. Bautista Agut match… well, at least by the current standards of tennis. There are no fans allowed, of course, at the Billie Jean King National Tennis for the Western & Southern Open (and there won’t be for the US Open, either). But tournament officials, players’ team members, and some other players showed up for Friday’s semifinal nightcap. And why not? What else is there to do in the bubble? It was definitely the most well-attended match we have seen this week.

I wonder who all these people are in the stands? #Djokovic #Bautistaagut #Atp #Tennis #Cincinnati #WesternandSouthernOpen #Newyork pic.twitter.com/Kew7zsT9Zi

The point of the day : Hawkeye malfunction

In a doubles semifinal match featuring Steve Johnson and Austin Krajicek vs. Pablo Carreno Busta and Alex de Minaur, Johnson threw up a lob that landed at least six feet inside the closest line. In other words, it was even close to being out. For this tournament, however, linespeople are not being used; all the calls are made electronically. And we all know what can happen when technology is involved: things can go wrong! That is exactly what happened with Johnson’s shot, which was inexplicably called out by Hawkeye.

The tournament was supposed to end on Friday, but now it is Championship Saturday following the one-day pause to shed light on social injustice. Both of the singles finals will be played in Louis Armstrong Stadium, starting with Osaka vs. Azarenka and concluding with Djokovic vs. Raonic Click here for the full order of play.