French Open 2020: Nadal, Federer and Djokovic, and why the G.O.A.T. debate is trash

Men’s tennis has been dominated by Rafael Nadal, Novak Djokovic and Roger Federer since the early 2000s. Here are their vital statistics. 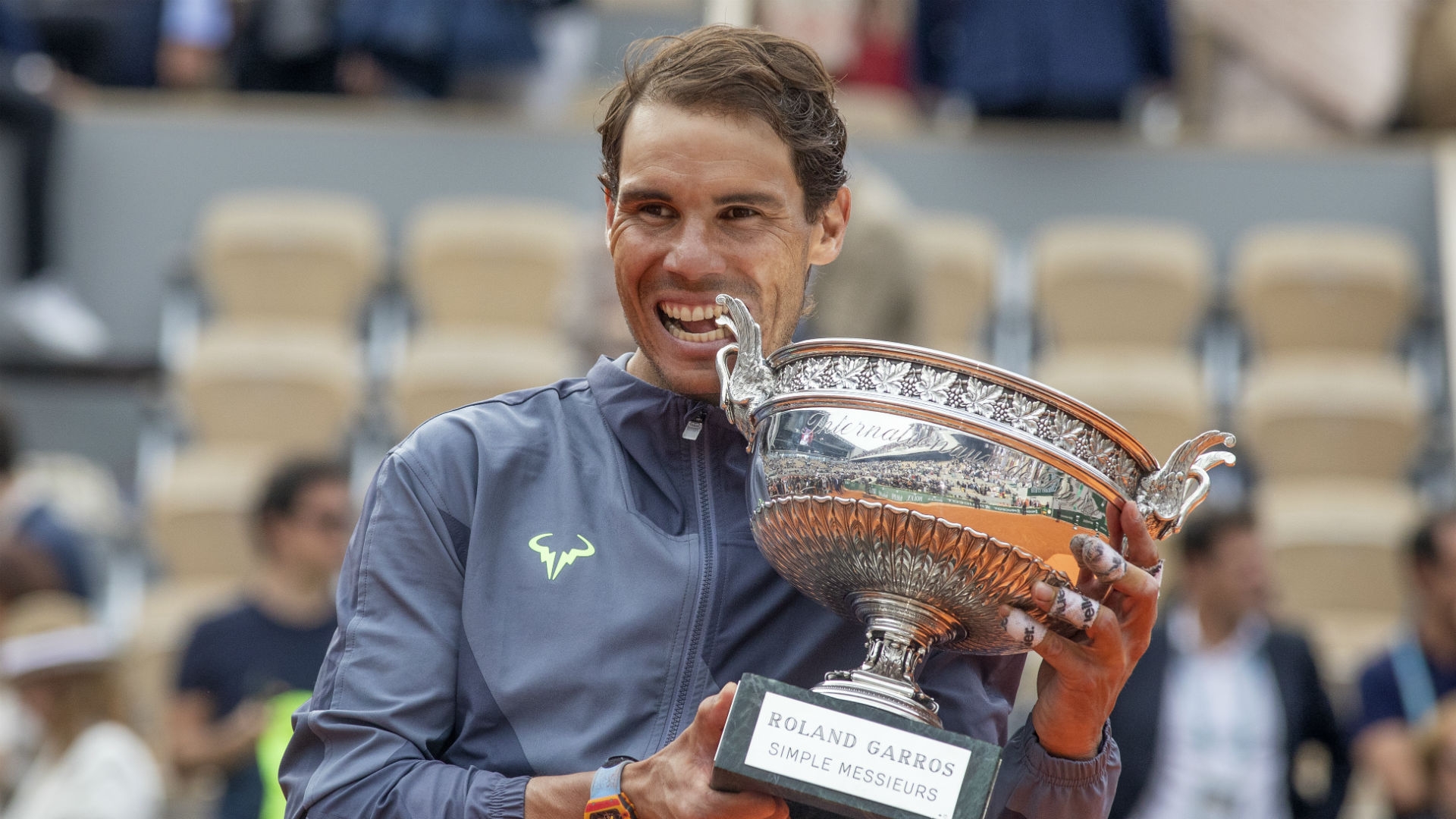 Roger Federer was once a habitual racket smasher but give him a chance and he’ll duck this argument.

Rafael Nadal possesses just about the meanest snarl in tennis but he could let this argument drop happily too.

Even Novak Djokovic, no stranger to an argument, is averse to causing a rumpus in this case.

Yet the question of which of the Big Three is the greatest men’s tennis player of all time can provoke boisterous debate beyond the locker room, sparking hostility even among the sport’s Prosecco and prawn sandwich brigade. Never underestimate the ferocity of a tennis stan.

There may never be a satisfactory answer, given that in all likelihood, Federer, Nadal and Djokovic will each end their careers on or around the 20 grand slam titles mark.

Considering Pete Sampras was once portrayed as super-human for reaching 14 slams, the achievements by the three titans of the modern game beggar belief.

Each man has taken tennis to new levels, in his own way, and as a new generation begins to rise, we have reached an apposite moment to examine the numbers that show how they have moved the sport forward.

Men’s tennis has three G.O.A.T.s and at this stage to pick one above another would be churlish.

From his Roland Garros debut in 1999 to a semi-final run at the Australian Open this year, the longevity of Federer has been almost as astonishing as some of his easy-on-the-eye tennis.

The list of records he has racked up is absolutely bewildering, beginning with his unmatched 20 men’s slam singles titles. The Swiss was the first man to go beyond Sampras, and in the men’s game he is the only player to win three slams in the same season three times (2004, 2006, 2007), make 10 successful title defences, and win more than 100 matches at two different grand slams – Wimbledon and the Australian Open.

He has reached an unsurpassed 31 slam singles finals (Nadal – 27, Djokovic – 26), and a mind-boggling 46 semi-finals at the four majors. Between the 2004 French Open, where he lost in the first round, and the 2010 edition at Roland Garros, where he fell in the quarters, Federer marched to the semi-final or further at 23 successive majors, winning 14 titles in that time.

Reaching seven or more finals in any grand slam is a superlative feat, but Federer has achieved that in three of the four majors (Wimbledon – 12, US Open – 7, Australian Open – 7), and twice won five consecutive titles at individual majors (Wimbledon 2003-07, US Open 2004-08).

And that is just scratching the surface.

He has spent the most weeks at world number one (310) and the most consecutively so (237), and sits third on the ATP list for the most aces in a career (11,344), behind only the towering duo of one-trick wonders Ivo Karlovic and John Isner.

NADAL: ONCE THE YOUNG UPSTART, FOR WHOM TWENTY WON’T BE PLENTY

Nadal can almost claim to have equalled Federer’s 10 successful title defences, after retaining his crown nine times at Roland Garros, while winning Wimbledon in 2008 and 2010, having had to miss the 2009 tournament through injury.

There are plenty of records the remarkable Spaniard can call his own though, beginning with his 12 French Open triumphs, the most titles won by a player in any of the four grand slam tournaments.

From 2005 to 2014, Nadal won at least one slam every season, the 10-year streak setting him apart from Federer and Djokovic who have never managed such consistency.

By securing Olympic singles gold in Beijing in 2008 and doubles at Rio in 2016, Nadal became the first man to claim the Games double on top of the career singles Grand Slam at all four majors.

His 19 grand slams is not a record, of course, but another in Paris over the coming fortnight would take Nadal level with Federer.

DJOKOVIC: THE INTERLOPER WHO COULD OUTLAST THE DIAMOND DUO

Like Federer, Djokovic has reached eight or more semi-finals at each of the four majors, on his way to 17 slam titles. He was firm favourite for the US Open and an 18th slam earlier this month until being disqualified for carelessly hitting a ball that struck a linesperson.

Many expect Djokovic to pass both Nadal and Federer and nudge to 21, 22 slams, maybe higher still, yet the 33-year-old may find that a tall order as the likes of Dominic Thiem break through.

On and off the court, there have been moments to regret this year for Djokovic, but his career stands up to the best, and in many aspects he leaves Federer and Nadal standing.

The Serbian is the only player in tennis to have won all four majors, the end-of-year ATP Finals and each of the nine highly-prized Masters 1000 tournaments.

With his run of triumphs from Wimbledon in 2015 to the French Open in 2016, Djokovic became the first man to hold all four grand slam singles titles at the same time since Rod Laver in 1969 achieved a calendar clean sweep.

Again, scratching the surface. Djokovic’s records run page after page, with his place in the pantheon assured.

To think, he was once the interloper on the celebrated Nadal-Federer rivalry. Now he has a chance to outstrip both in the numbers game.

Federer won his first major at Wimbledon in 2003, and taking in that and the grand slams that have come since, the combination of Basel’s favourite son, Spanish superstar Nadal and Belgrade favourite Djokovic have scooped 56 of 68 singles titles.

Andy Murray and Stan Wawrinka, with three titles each, are the only two other men to win more than one slam during that 17-year span. Barely anyone else had a look-in.

Such dominance is without equal in tennis.

To take previous eras as comparison points, Bjorn Borg, John McEnroe and Jimmy Connors won all their grand slams between the 1974 Australian Open and the 1984 US Open, collectively gathering 26 titles across those 44 tournaments. Sensational, and it remains important to make that point, but the haul has been blown out of the water by the modern-day Big Three.

Ivan Lendl, Boris Becker and Stefan Edberg were the next generation and scooped 20 slams (Lendl – 8, Becker – 6, Edberg – 6) from a 48-tournament stretch beginning at the 1984 French Open and running through to the 1996 Australian Open.

Agassi won in Australia in 2003, and Spaniard Juan Carlos Ferrero took the French Open title in the spring. Come the English summer, it was Federer’s turn at the wheel for the first time, that first Wimbledon title signalling the dawning of a new era.

In 2002, Andre Agassi and Pete Sampras met for the final time in their careers…

The stage? The @usopen final.

LEGACY: THESE RECORDS COULD STAND THE TEST OF TIME

As the sun begins to slowly descend, with Federer now 39 years old and Nadal and Djokovic well into their mid-thirties, the famous wins in Melbourne, Paris, London and New York will become fewer, and soon they will belong to memory.

Another great generation will rise; perhaps not for some years to come, but doubtless they will rise.

Yet asking them to scale the winning heights of the Federer-Nadal-Djokovic triad might be another matter entirely.