As Novak Djokovic celebrates his 33rd birthday, we reflect on his most epic matches on the grand slam stage. 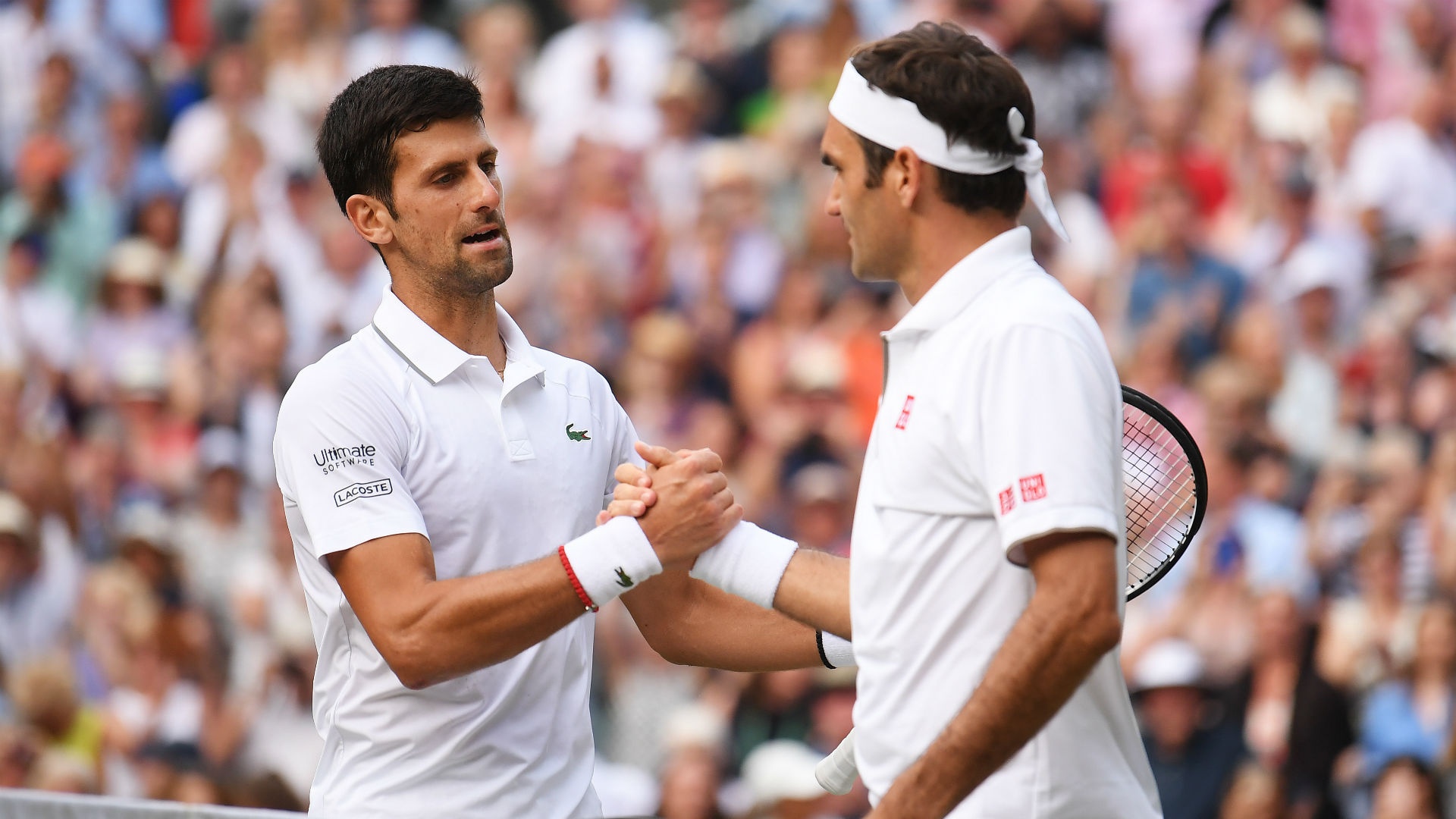 Novak Djokovic celebrates his birthday on Friday, with the world number one showing no signs of slowing down as he turns 33.

The world number one lifted his 17th grand slam title in January with a five-set win over Dominic Thiem.

Five-set sagas have been the domain of Djokovic throughout his career, with Roger Federer, Rafael Nadal, Andy Murray, Stan Wawrinka and Juan Martin del Potro all sharing the court with him for a series of grand slam thrillers that live long in the memory.

Here we look back at a selection of Djokovic’s most epic encounters.

Djokovic is renowned for his power to recover from even the most precarious of positions and Federer was on the receiving end of two such Houdini acts in successive years at Flushing Meadows.

“It’s awkward having to explain this loss,” Federer said afterwards. “Because I feel like I should be doing the other press conference.”

Federer offered little praise for a stunning forehand winner that helped the Serbian save a match point, saying that at that moment Djokovic did not look like a player “who believes much anymore in winning”.

He added: “To lose against someone like that, it’s very disappointing, because you feel like he was mentally out of it already. Just gets the lucky shot at the end, and off you go.”

There has arguably been no tournament where Djokovic demonstrated a greater proclivity for endurance than at Melbourne Park in 2012.

His semi-final with Murray, who was weeks into his partnership with coach Ivan Lendl, produced a bewitching prelude of what was to follow in the final.

One of the best @DjokerNole v @andy_murray matches you’ll see.

Murray pushed Djokovic to the limit in a marathon lasting four hours and 50 minutes, fighting back from 5-2 down in the final set of a match in which the ultimate victor battled breathing problems.

Djokovic recovered from surrendering that lead, however, and clinched a 6-3 3-6 6-7 (4-7) 6-1 7-5 victory to set up a final with Rafael Nadal that somehow surpassed the semi-final as the pair etched their name into the record books.

With Djokovic needing to produce an exhausting effort to get beyond Murray and Nadal having taken part in his own classic semi-final with Federer, albeit with victory secured in four sets, both would have been forgiven for putting on a final below their usual standards.

They instead did the exact opposite and delivered a showpiece considered by some to be the greatest final ever.

An undulating attritional battle went for five hours and 53 minutes, making it the longest final in grand slam history and the longest Australian Open contest of all time.

Nadal was on his knees as if he had won the tournament when he took the fourth set on a tie-break and was a break up in a fittingly frenetic decider.

It’s all setup for another #AusOpen classic.

Immerse yourself in what is to come by reliving the 2012 final between @DjokerNole and @RafaelNadal here: https://t.co/Bf3wGb8ghO pic.twitter.com/p3oiTODxpE

Djokovic said: “It was obvious on the court for everybody who has watched the match that both of us, physically, we took the last drop of energy that we had from our bodies, we made history tonight and unfortunately there couldn’t be two winners.”

Having been the thorn in Murray’s side in Melbourne for successive years, also defeating him in the final of the 2011 Australian Open, Djokovic succumbed to the Scot at Flushing Meadows, but only after a Herculean comeback effort.

Murray took the first two sets, the opener won in the longest tie-break (24 minutes) of a men’s championship match. Djokovic, though, appeared primed to become the first man since Gaston Gaudio in 2004 to win a slam final after losing the first two sets.

Gracious in defeat, Djokovic said of Murray’s first slam title: “Definitely happy that he won it. Us four [Federer, Nadal, Djokovic and Murray], we are taking this game to another level. It’s really nice to be part of such a strong men’s tennis era.”

With Nadal back from a serious knee injury that cost him seven months of his career, the Spaniard returned to peak form at his favourite slam with another absorbing duel with Djokovic.

Lasting four hours and 37 minutes, it did not quite match the heights of their Australian Open opus, but there were enough twists and turns to satisfy those clamouring for another Djokovic-Nadal classic.

.@RafaelNadal @DjokerNole
Do you remember this “Classic Match” at #RolandGarros 2013?https://t.co/njgNsli87A

Nadal was unable to serve for the match in the fourth set and Djokovic led 4-2 in the fifth, but a decider stretching one hour and 20 minutes went the way of the King of Clay.

“I was ready for the fight. In Australia 2012 it was a similar match – today it was me [that won]. That’s the great thing about sport.”

“It was one of the best matches I’ve been a part of.”

Given his travails of 2012, Djokovic’s words after his victory over the 2009 US Open champion served as remarkably high praise.

It was a match worthy of such an effusive tribute.

Having twisted his knee earlier in the tournament, Del Potro’s contribution to a phenomenal last-four clash served as one of more impressive feats of the Argentinian’s career.

Against another opponent, his unrelenting and thunderous groundstrokes would have prevailed, but it was Djokovic’s court coverage that proved the difference after four hours and 43 minutes.

Two days were needed to separate Djokovic and Murray as the Parisian skies played their part in the semi-final.

A storm halted proceedings on the Friday with Djokovic 2-1 up heading into the fourth set.

Murray appeared to have benefited from the delay as he began Saturday by forcing a decider, but Djokovic was clinical in wrapping up the fifth in comfortable fashion.

He triumphed 6-3 6-3 5-7 5-7 6-1, though a first Roland Garros title would have to wait, however, with Djokovic stunningly defeated by Stan Wawrinka in the final 24 hours later.

Wawrinka would again prove Djokovic’s undoing in New York as an astonishing demonstration of shot-making saw the defending champion dethroned.

The Swiss’ 18 hours on court ahead of the final were double that of Djokovic, but his toil paid dividends as he bounced back from dropping the first set on a tie-break.

It was a rare occasion where Djokovic ​– battling a blister on his big toe – was rendered powerless in the face of Wawrinka’s 46 winners.

Wawrinka came through 6-7 (1-7) 6-4 7-5 6-3 after three hours and 55 minutes, with Djokovic saying: “Congratulations, Stan, to your team as well. This has been absolutely deserved today. You were the more courageous player in the decisive moment and he deserves his title.”

Spread across two days having been made to wait six hours and 36 minutes for Kevin Anderson to outlast John Isner in the other semi-final, Djokovic and Nadal combined to deliver a spectacle eminently more memorable than the meeting of the two big servers.

Djokovic led by two sets to one when play suspended at 11:02 pm (local time), Wimbledon’s curfew ending any hopes of a Friday finish.

The prospect of a swift Saturday was soon put to bed for Djokovic as Nadal claimed the fourth. However, Djokovic eventually came through a deciding set among the finest ever contested by the two greats to seal a 6-4 3-6 7-6 (13-11) 3-6 10-8 victory after five hours and 15 minutes.

2018 brought @DjokerNole not just his fourth #Wimbledon title, but one of the most unique triumphs of his career… pic.twitter.com/2kyzWZJOLN

It marked a first Wimbledon final since 2015 and the start of Djokovic’s return to the top of the sport after struggles with injury saw him tumble out of the top 20 in 2018.

Djokovic said: “Speaking from this position right now it makes it even better for me, makes it even more special because I managed to overcome challenges and obstacles, get myself to the finals of a slam.”

Djokovic was bidding to become the first man to hold all four grand slams at the same time twice but fell foul of Thiem and the French weather.

The last-four meeting began on a Friday but was suspended three times due to wind and rain before organisers cancelled play for the day.

Thiem eventually edged an enthralling affair 2-6 6-3 5-7 7-5 5-7 in four hours and 13 minutes, but Djokovic was quick to direct his ire at tournament officials.

“It [was] one of the worst conditions I have ever been part of,” said Djokovic.

“When you’re playing in hurricane kind of conditions, it’s hard to perform your best.”

Few would argue Djokovic did not deserve to retain the Wimbledon title. Grinding down Federer remains one of the most arduous tasks in sport, but most would accept this was a final Djokovic was fortunate to win.

An awe-inspiring match, Federer’s was a vintage performance, but it was underscored by missed opportunities that will stay with him long after his dazzling career comes to an end.

Federer had a pair of match points at 8-7 in a captivating fifth set. Both were squandered, and few players in the history of tennis have ever been as ruthless at compounding the missed chances of others as Djokovic.

*How* do you do this to save Championship point?#Wimbledon @Djokernole pic.twitter.com/cHPpqADVFG

“If not the most exciting and thrilling finals of my career, in the top two or three and against one of the greatest players of all time,” Djokovic said. “As Roger said, we both had our chances. It’s quite unreal to be two match points down and come back.”