Tommy Paul is through to his first career ATP final after beating Frances Tiafoe in three sets on Friday in Stockholm. Paul awaits Denis Shapovalov on Saturday

An all-American battle between two in-form competitors did not disappoint at the Stockholm Open on Friday evening. The first semi-final saw Tommy Paul overcome Frances Tiafoe 5-7, 7-6(4), 6-4 after two hours and 30 minutes. Calling it his best level of the year, Paul finished with 41 winners compared to only 17 unforced errors.

Tiafoe served for the match at 6-5 in the second set but failed to get across the finish line. After breaking to stay alive, Paul never relinquished momentum the rest of the way. The world No 52 took the ensuing tiebreaker and then seized control with a break at 1-1 in the decider. A love hold at 5-4 eventually wrapped up the proceedings in style.

“It was so fun to play in front of you guys,” Paul told the crowd during his on-court interview. “It was so much fun to play against Frances. I haven’t gotten a win over Frances since juniors, so that was a big one for me. That was the best level I’ve played probably all year long. He was playing amazing tennis for the first two sets and forced me to raise my level. (Getting) broken at 5-5 again in the second set wasn’t fun. I knew if I stayed tough there he might give me a couple looks and I ended up breaking.

“The balls are slower here so I can really swing out. Every match I’ve had a big crowd for. I played a Swede in the first round, Andy Murray yesterday, and then Big Foe. It’s been a lot of fun to play in front of you guys.”

Murray had knocked off No 1 seed Jannik Sinner in the second round, but the 34-year-old Scot had no answer for Paul one day later in the quarterfinals.

Paul will go up against defending champion Denis Shapovalov in Saturday’s final. Shapovalov defeated fellow Canadian either Felix Auger-Aliassime 6-4, 7-5 in the semi-final nightcap on Friday.

“I am very happy to have played exceptional tennis today,” Shapovalov said. “Felix is an incredible player, so I knew I had to come out and play big. We know each other well. It definitely means a lot to reach the final.

“It’s crazy that it’s our first meeting ever,” the world No 18 said of himself and Paul. “We grew up in juniors together; he was a couple of years older. I am a big fan of his game and it was only a matter of time before he came up with a week like this. We’re big shot-makers, so it should be fun.” 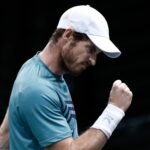