Home » News » ATP » Vienna recap: Rublev still rolling, Sonego’s stunner, and what you might have missed

Vienna recap: Rublev still rolling, Sonego’s stunner, and what you might have missed

It was a wild week in Vienna, with a ton of upsets and unfortunately lots of injuries. In the end, though, Andrey Rublev capturing the title was not something unexpected. 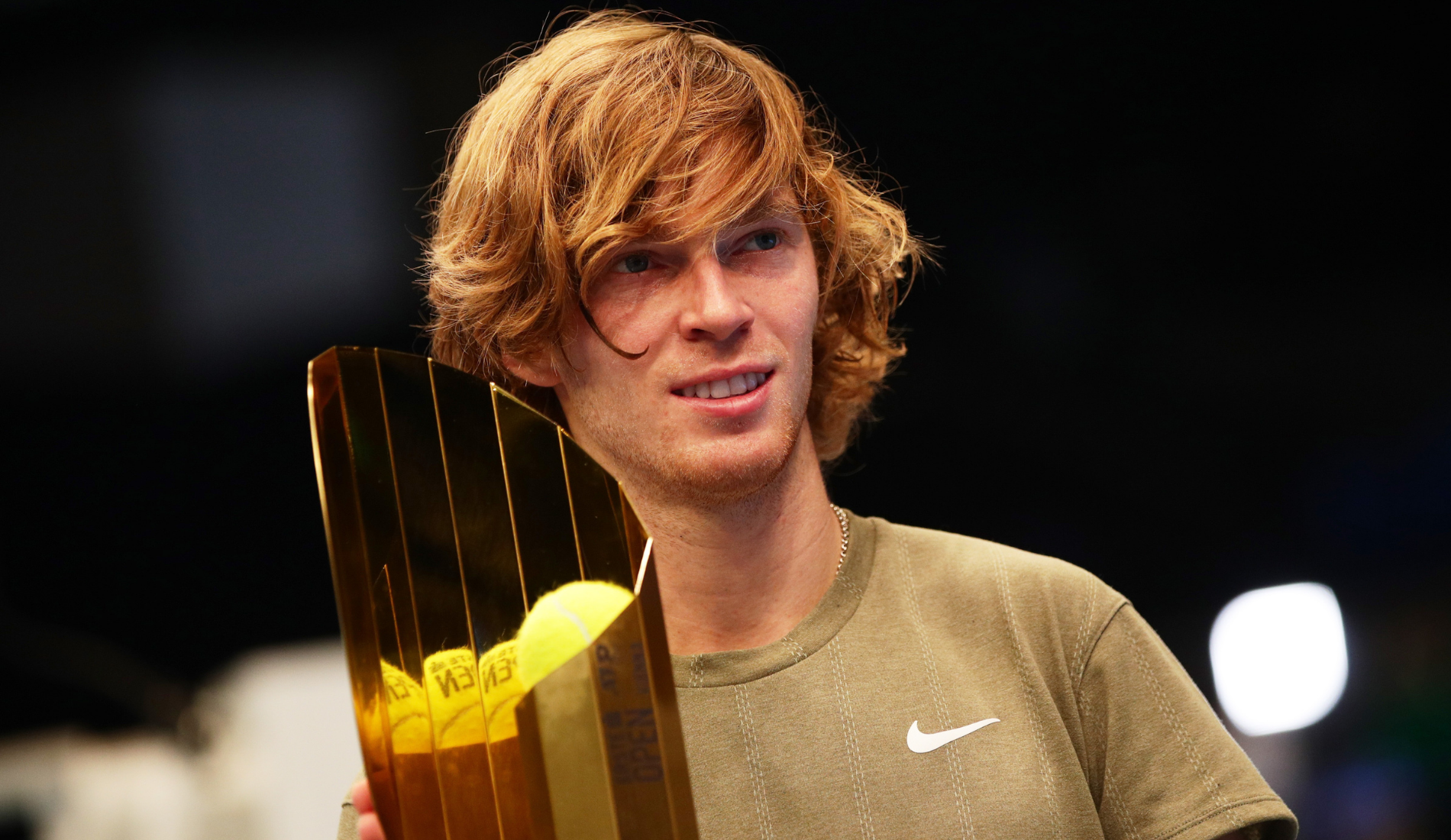 Novak Djokovic vs. Dominic Thiem — that was the potential final at this week’s Erste Bank Open, which boasted one of the best 500-point fields in history with 18 top 30 players signed up. But Djokovic vs. Thiem did not happen; not even close. After being unofficially guaranteed to finish the year as world No 1, Djokovic delivered a listless performance in the quarter-finals and lost easily to the surprising Lorenzo Sonego. As for Thiem, he struggled physically during a quarter-final setback against Andrey Rublev before the Russian rolled to the title at the expense of less formidable opposition. With five ATP titles this season, Rublev — who did not drop a single set in Vienna — is surely one of the players to watch at the upcoming Rolex Paris Masters. Among those not in Paris are Djokovic, Thiem, and Gael Monfils, who ended his season after another retirement in Vienna.

• An expected champion (Rublev) and an unexpected finalist (Sonego)

Although Djokovic was the obvious title favorite going into the Erste Bank Open, Rublev was right at the top on the list of the Serb’s most serious challengers. After all, Djokovic and Rublev were tied for the 2020 ATP titles lead (four) prior to this week. After Djokovic lost early — to world No 42 Sonego in the quarter-finals — the door was open for the Russian. And he walked right through that door, blitzing the rest of the Vienna field without dropping a single set along the way. Rublev capped off his run with a 6-4, 6-4 victory over Sonego in Sunday’s final.

Upsets came fast and furiously in Vienna. Grigor Dimitrov beating Stefanos Tsitsipas was by no means the biggest upset of the bunch, but it was the best match. The Bulgarian did extremely well to recover from a disastrous ending to the first set, in which he squandered a 5-0 lead in the tiebreaker by losing seven points in a row. He righted the ship to overcome Tstisipas 6-7(5), 6-4, 6-3 after two hours and 13 minutes.

“I kept on believing; I kept on doing the right things and stayed in the match, which I think was the most important thing,” the world No 20 explained. “You always have to be ready, so I was just focusing on the most simple things of the game.”

Sonego’s run to the final came completely out of nowhere — literally. They say it’s better to be lucky than good, and the 42nd-ranked Italian was both this week. After getting a lucky-loser spot in the main draw, he shocked world No 1 Djokovic 6-2, 6-1 on his eventual way to his second-ever ATP final.

Daniil Medvedev is not exactly having a bad 2020 season, but it has been a disappointment by the standards that he set for himself last year. The sixth-ranked Russian reached an incredible nine finals in 2019 and won four titles. He has not yet won a tournament or even played in a final this year. Medvedev’s struggles continued with a 6-4, 7-6(5) loss to Kevin Anderson in the Vienna quarter-finals.

With yet another huge performance this week, Rublev has clinched a spot in the year-end championship for the first time in his career. He joins Djokovic, Rafael Nadal, Thiem, Tsitsipas, Medvedev, and Alexander Zverev at the Nitto ATP Finals.

There are many number of statistics that tell the tale of Djokovic’s shocking loss to Sonego. Among them are these:

As for Rublev, he has now won more matches (39) this year than he had in any previous season in his career…even though the 2020 tennis campaign has lasted only five months! He also becomes the fifth player younger than 24 years old since 2008 (joining Djokovic, Nadal, Zverev, and Andy Murray) to win at least five titles in a single season.

• The punchline: Djokovic secures year-end No 1…sort of

“I move on completely fine with today’s result.”

That is what Djokovic had to say following his loss to Sonego. It makes some sense, too, because Djokovic unofficially locked up the year-end No 1 ranking when he beat Borna Coric in the second round. The Serb only had to reach the Vienna quarter-finals in order to clinch it…unless world No 2 Nadal decides to take a wild card into the Sofia Open in between the Paris Masters and the Nitto ATP Finals. Because Nadal is not going to do that, Djokovic is guaranteed to be No 1 at the end of the season. But because Nadal technically could do it (and could win Paris, Sofia, and London in succession), the ATP cannot yet make it official.

• The picture of the week: Another socially distanced press conference

This photograph of Monfils’ press conference does well to sum up the Vienna tournament and the whole 2020 tennis season at the same time. Unfortunately, one of the biggest stories of the week was a whole host of injuries and retirements (Monfils was one of four). In 2020, meanwhile, the new normal has been virtual press conferences held via zoom or through some other social media outlet. One day after retiring in the first round against Pablo Carreno Busta due to neck and shoulder injuries, Monfils held a press conference on Twitch to announce the end of his season.

In addition to the Frenchman’s exit, Aljaz Bedene (first round against Dan Evans), Jannik Sinner (second round against Rublev), and Kevin Anderson (semi-finals against Rublev) also retired due to injuries. Rublev almost got another retirement, too, but Thiem decided to play out the second set of their quarter-final contest despite dealing with a foot problem.

• Question for the future: Can Djokovic and Thiem recover for London?

Unsurprisingly, Thiem withdrew from Paris following his Vienna loss. It is unclear what the specific nature of the third-ranked Austrian’s foot injury is, but he will have more than two weeks to recover before the Nitto ATP Finals (Nov. 15-22). Unless it turns out to be far worse than anticipated, Thiem should be ready to go. He will be trying to get one step farther in London, where he finished runner-up to Tsitsipas last fall after losing the final in a third-set tiebreaker.

The good news for Djokovic is that his Vienna ouster had nothing to do with any physical problem, and he also now has two weeks off prior to London. However, it remains be seen how motivated the 33-year-old is coming down the stretch this season. Djokovic will have officially clinched the year-end No 1 spot by the time he arrives in London, so how badly will he want another title in London? He did not seem to want it too badly in Vienna….