Home » News » “If you’d have told me 3 weeks ago that I’d have made the semifinals of the AO, I’d take that absolutely every single day of the week”

“If you’d have told me 3 weeks ago that I’d have made the semifinals of the AO, I’d take that absolutely every single day of the week”

Ashleigh Barty didn’t achieve her goal to play the Australian Open final after losing against Sofia Kenin (7-6, 7-5), but she explained in post-match press conference she didn’t think she could reach the semi-finals, after such a terrible summer. 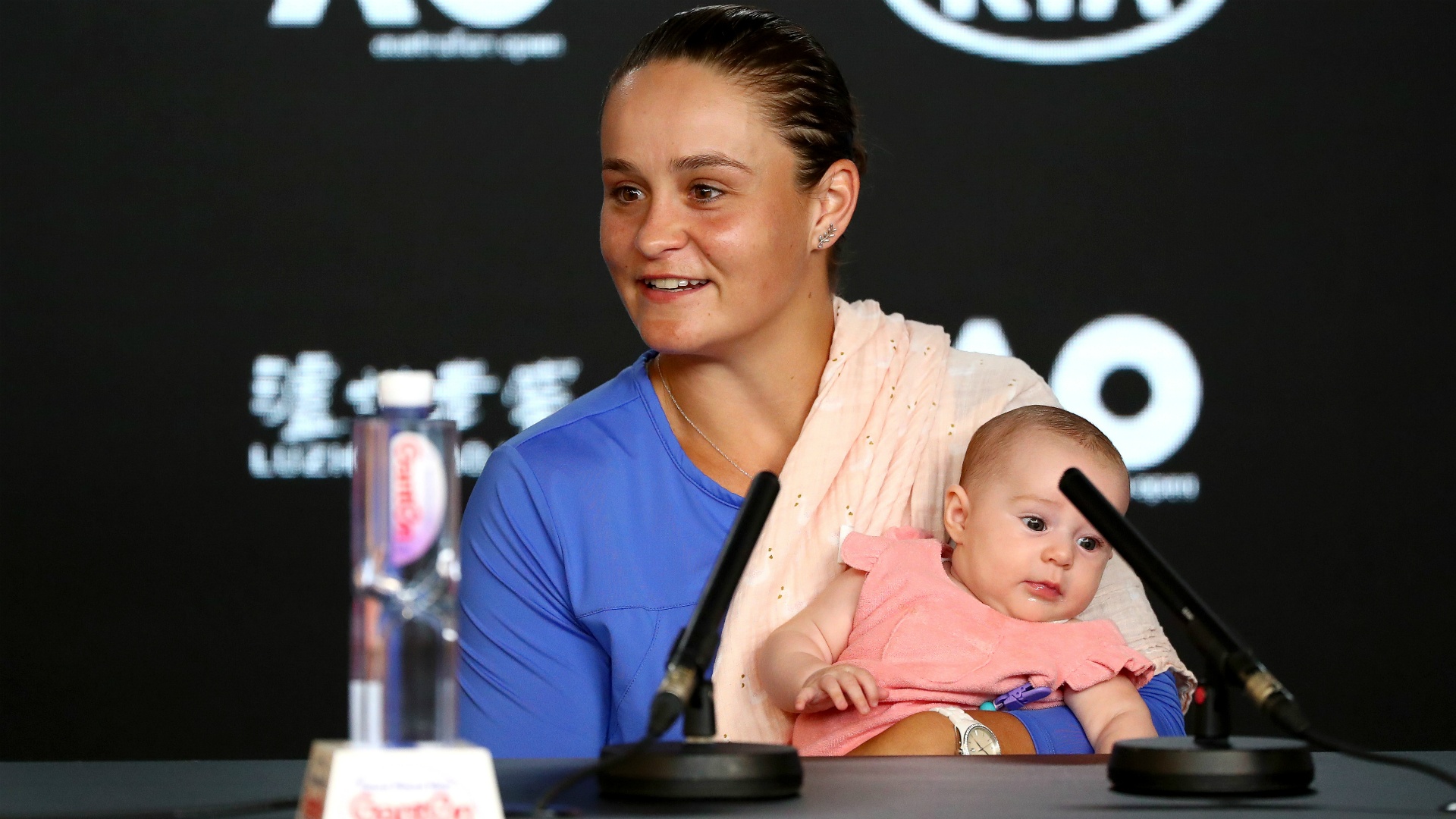 Q. Where did you find the baby?
ASHLEIGH BARTY: It’s my newest niece. My sister just had her about 11, 12 weeks ago. Yeah, this is what life is all about. It’s amazing.

Q. Can you sum up the match today, please.
ASHLEIGH BARTY: Yeah, I think a match where I didn’t feel super comfortable. I felt like my first plawasn’t working. I couldn’t execute the way that I wanted. I tried to go to B and C. Yeah, I think I had to dig and find a way. I mean, I’m two points away from winning that in straight sets, which is disappointing. Knowing I had to fight and scrap, I still gave myself a chance to win the match.

Q. What was the A plan, the B and C plans?
ASHLEIGH BARTY: I’m not going to tell you all my secrets. I try and go out and play the way I want to play. If it doesn’t work, I know I have different tools I can go to. I tried to go to those tools today. Unfortunately couldn’t quite scrap enough to get over the line.

Q. How are you feeling? So much pressure on
you across this whole summer. Two set points in
each set.
ASHLEIGH BARTY: Yeah, it’s disappointing. But it’s been a hell of a summer. I mean, if you would have told me three weeks ago that we would have won a tournament in Adelaide, made the semifinals of the Australian Open, I’d take that absolutely every single day of the week. But I put myself in a position to win the match today and just didn’t play the biggest points well enough to
be able to win. I have to give credit where credit’s due. Sofia came out and played aggressively on those points and deserved to win.

Q. Many people might not know much about
Sofia. Has she proved she’s up there in the top 5,
top 10?

Q. Was the occasion any kind of factor today?
ASHLEIGH BARTY: Not at all. I’ve been in a Grand Slam semifinal before. Yes, it’s different at home. I enjoyed the experience. Yeah, I mean, I love being out there. I’ve loved every minute of playing in Australia over the last month. Yeah, I mean, I could have had an opportunity to go one more match, but we didn’t quite get that today.

Q. How tough was it being out on court today?
Obviously a really hot day. Was it troubling you at
all?
ASHLEIGH BARTY: No, not really. I mean, I’ve grown up in Queensland. I’ve played in summers, played in the sun a long time. I know Sofia has also grown up in Florida. Everyone is playing in the same conditions. It didn’t help or hinder me. It kind of is what it is.

Q. Did she do anything that surprised you today?
Early on she was going after your backhand.
ASHLEIGH BARTY: I don’t think that was different to what she’d done in the past. I think today it was about me trying to find my court position a little bit better. At the end of the day she played the biggest points well. I mean, I kind of felt like I was scrapping and trying to find what I wanted to do best and came within a couple of points of winning the match. Yeah, sometimes it falls your way, sometimes it doesn’t. That’s just sport, that’s life.

Q. You’ve been the face of the Australian Open
here. You probably will be for many years to
come, I imagine. What have you learnt from this
past month that you will put into practice next
year when you deal with everything again?
ASHLEIGH BARTY: Oh, I’ve learnt so much over the last month. I’ve learnt from all of the experiences that I’ve kind of been thrown into. I’ve loved every minute. I won’t wait a year to put those into practice. I’ll put those into practice next week. The next time I walk out on court, the next time I kind of wake up in the morning, every experience you need to learn from. I’ve done that.
I feel like as a team we’ve grown. We’ve enjoyed every single minute. I mean, can’t wait to get started for kind of the rest of the year. I feel like it’s going to happen pretty quickly and we’re going to be back sitting at this table with an Australian summer next year.

Q. What kind of things have you learnt?
ASHLEIGH BARTY: Lots (smiling).

Q. Anything in particular?
ASHLEIGH BARTY: Yeah, but I don’t need to tell you guys. Obviously I’ll keep that, keep chipping away, keep learning, keep growing. That’s what we do.

Q. How easy or difficult is it to compete against a
player that is so complicated like Sofia?
ASHLEIGH BARTY: Every player is complicated. Every player is unique. Every player is different. Even when she’s as confident as she is, I know I need to go out there and play my best. I wasn’t able to quite do that today. In saying that, I was also a couple of points from winning the match in straight sets. That’s disappointing. But we live and we move on.

Q. Could you tell us your niece’s name and did
she give you any particular words of comfort
after you came off the court?
ASHLEIGH BARTY: Her name is Olivia. She’s telling you that right now. But, yeah, I mean, perspective is a beautiful thing. Life is a beautiful thing. She brought a smile to my face as soon as I came off the court. I got to give her a hug. It’s all good. It’s all good.

Q. What are your plans now? You go home for a
few days? Decompress?
ASHLEIGH BARTY: Yeah, I mean, like we do at the end of every tournament, the end of every experience: we kind of debrief it, we enjoy it, we celebrate it. You don’t get these opportunities every single week. We get to enjoy the experiences that we’ve learned, the experiences that we’ve had over the last month, then gear up for the next few tournaments, kind of the start of the U.S. summer.

Q. Where do you play next?
ASHLEIGH BARTY: I’ll be playing in Dubai, through the Middle East next.

Q. This whole experience being No. 1 here, the
expectations, easier than you thought it would
be, harder than you thought it would be?
ASHLEIGH BARTY: They didn’t exist. You guys spoke about them a lot. I felt like I answered a lot of questions without knowing the answer. I mean, for me, I’ve just tried to go about my business the same every single day. It’s regardless of whether
I was 50 in the world or 100 or 1 in the world. I try and prepare and do everything exactly the same. But, yeah, you guys have spoken about it a lot. I don’t know if I’ve given you a real answer because it kind of isn’t really there.

Q. What is it actually like to be No. 1? What
comes with it?
ASHLEIGH BARTY: A lot more seats are full in here. Sometimes I get the privilege of playing on the bigger courts. But really that’s about it. Nothing’s really changed for me or my team. We’re trying to chip away every single day to get better as people, to get better as tennis players. It just so happens that we got the No. 1 ranking next to the name on the draw.

Q. Can you comment on what makes Sofia so
tough as a player on court.
ASHLEIGH BARTY: Yeah. She has the ability to adapt. She has the ability to try different things, control the center of the court. I felt like she was able to do that today. Too many times she was on the inside of the court, I was trying to kind of configure
my way back into points. Yeah, I mean, she’s extremely confident at the  moment as well. She’s loving seeing the ball on her strings and she’s playing very well.

Will @ashbarty watch that semifinal? ?️