Dominic Thiem led by two sets to one and Novak Djokovic was in trouble, but not for the first time the Serbian showed strength in adversity. 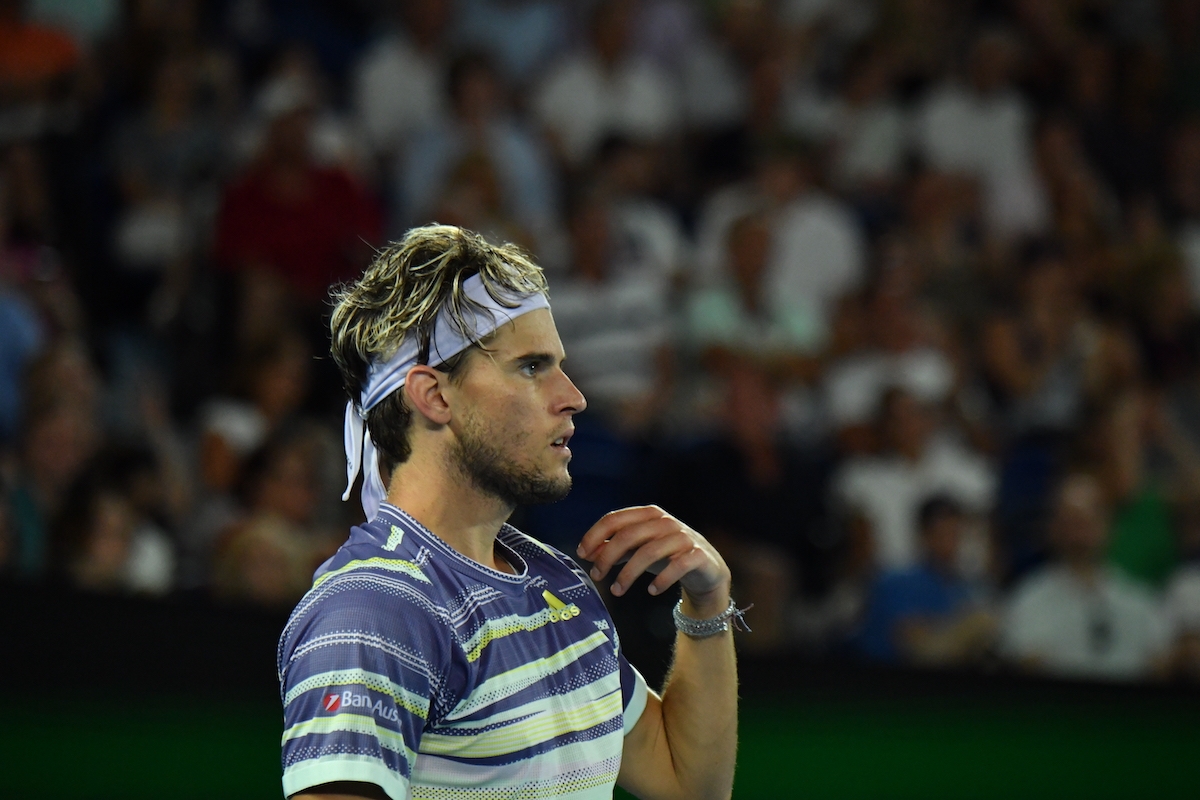 And now the Serbian is a 17-time grand slam champion, fast closing on Rafael Nadal and Roger Federer on the all-time list, after an eighth Australian Open title.

World number one again, into the bargain.

And that familiar beat goes on. Federer, Nadal and Djokovic have now swept up the last 13 slams between them. Interlopers, keep trying your best lads.

Many greats of the Open era barely gave a Castlemaine XXXX about the Australian Open until the mid-1980s, the likes of Bjorn Borg and John McEnroe repeatedly giving Melbourne a miss.

Yet Djokovic has built his career around repeated triumphs on Rod Laver Arena and is now 8-0 in Australian Open finals, joining Nadal and Federer as the only players to have won a single slam eight or more times.

Giving credit where credit’s due @DjokerNole thanks opponent Dominic Thiem for the memorable battle.#AO2020 | #AusOpen pic.twitter.com/txDnaqLiP5

In previous years Djokovic has used this fortnight as a springboard to a new season, but he arrived at Melbourne Park already on a high, fresh from helping Serbia to glory in Sydney in the inaugural ATP Cup, fresh from beating Nadal so soon into a new season. Fresh to take on the world.

Yet for a long stretch of this five-set final against Dominic Thiem, Djokovic looked anything but fresh.

After trading breaks, Djokovic was gifted the first set when Thiem flunked a backhand and then double-faulted.

Usually a mighty front-runner, Djokovic’s game began to splutter. Two double faults in game three of the second set saw him hand over the advantage to Thiem, who was ahead despite his often mighty backhand operating temperamentally.

It was that single-handed shot that was threatening to undo Thiem’s otherwise fine work as he forged to level the match, and a wild example gave back the break, with Djokovic looking sharper after a change of racket.

But the 32-year-old from Belgrade can blow up too, and when he dropped serve for a second time in the set, after being twice penalised for time violations before slamming a forehand over the baseline, Djokovic was rattled.

He approached chair umpire Damien Dumusois, tapped him on the shoe and snapped: “Great job man, especially in the second one. You made yourself famous, well done.”

The inelegant show of dissent was followed by Thiem wrapping up the set then swiftly tearing to a 4-0 lead in the third.

Thiem’s backhand was back, while Djokovic appeared physically sapped. Limping, at times almost unsteady on his feet; anyone else and you might have written him off.

But Djokovic has shown a limp and followed it with a sprint before.

And although Mr Dumusois had not heard the end of Djokovic’s complaints – the umpire’s failure to immediately over-rule a call of ‘out’ led to another snippy rebuke – soon the match began to turn around.

Thiem made sure of set three, but just as a first grand slam title came into the Austrian’s sights, it was clinically wrenched away.

A cheap concession of serve in the eighth game of the fourth set allowed Djokovic to level. Thiem was a rabbit in the headlights, Djokovic on full beam.

Breaking in the third game of the decider put Djokovic firmly in control, and that was swiftly followed by the saving of two break points, which effectively killed Thiem.

So what then of Thiem?

He said all the right things afterwards, praising Djokovic and speaking of the bigger picture in light of Australia’s bushfire crisis.

But after two French Open final defeats to Rafael Nadal, another slam setback will feel more painful by the day, particularly as he was in the ascent this time.

Ask Andy Murray, who lost four slam finals before making his breakthrough at the 2012 US Open, what these days feel like below the surface.

To take a Murrayism, Thiem is getting closer.

“I’m very aware and sure now that I can play on a very high level for a full Grand Slam….it makes me very confident for the next big tournaments which are coming up.”

Thiem is certainly due a break. He fell short in the ATP Finals title match last November, losing to Stefanos Tsitsipas, and split from girlfriend Kristina Mladenovic at around the same time.

In an eye-catching move, he hired his compatriot Thomas Muster to join his coaching team for 2020, but they have already parted company.

When he beat Djokovic during the ATP Finals, Thiem said it took “something outstanding, something unusual” to achieve that feat.

That was a best-of-three contest though. Over five sets, Djokovic, Nadal and Federer remain the untouchable trio when it comes to slam finals.

A Djokovic fan, wearing a red and white T-shirt bearing the message “Serbia against the world”, roared on his man as he reached the brink of this latest triumph.

Federer’s haul of 20 slams is within striking range, with Djokovic three short of the Swiss and two behind Nadal.

And here’s a thing: the men’s game has still yet to see a grand slam singles winner born in the 1990s.

Thiem would have become the first. He held this match in his hands, and he dropped it.