Australian Open: Yes, Naomi Osaka is a joy, but let’s talk about Jennifer Brady too

Jennifer Brady has flown under the radar for most of her career. Now her big moment in the spotlight arrives in the Australian Open final. 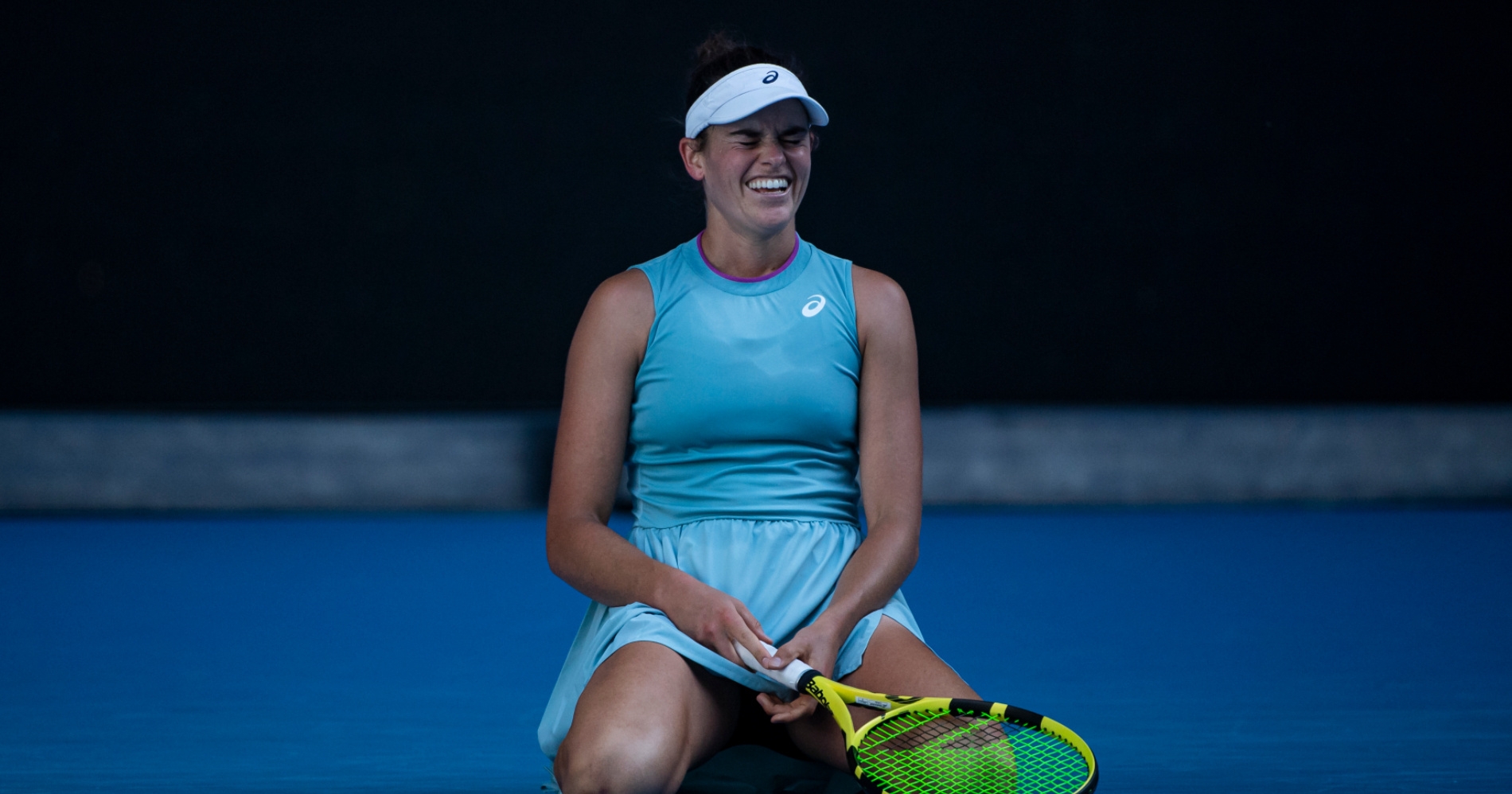 Jennifer Brady is on texting terms with an all-time great, told the world her twin sister is “a nerd” in a news conference, and refuelled with twice-daily orders of takeaway food during her Melbourne quarantine.

Naomi Osaka is commanding almost all the attention, but the ‘other’ Australian Open women’s finalist is a peppy character who could head home to the United States next week as a grand slam winner for the first time.

She reached the US Open semi-finals last year too, and has now become the eighth American woman to reach the final of a singles major in the 21st century.

We should talk more about her.

So who’s her famous friend?

Brady was born in Harrisburg, Pennsylvania, and moved with her family to Florida as a nine-year-old, but “not for tennis”.

At the age of 10 she joined Chris Evert’s academy in Boca Raton, learning the ways of the 18-time grand slam winner.

But Brady admits she “had a bit of a temper as a kid” and lacked mental sturdiness, which might just be why it has taken her until the age of 25 to make a major breakthrough.

Evert recognised her talent from an early age though.

“Chrissie messages me every now and then a lot,” said Brady. “She is somebody who has seen me since I was 10, 11 years old. So she’s probably known me the longest out here. It’s awesome to have someone like her in your corner, supporting you and cheering for you.”

A  is all we need @jennifurbrady95, you are through to the #AO2021 final! #AusOpen pic.twitter.com/HVevUX5Idn

Why haven’t we heard about Brady before?

All sports have sliding doors moments and if Michael Geserer had not come into Brady’s life, who is to say she would have scaled such heights as these.

Coach Geserer, a former coach of Germany’s Julia Goerges and many others, was nudged Brady’s way in 2019 by a mutual acquaintance, American coach Billy Heiser, and her career has been on an upwards trajectory ever since.

A promising junior but an unfulfilled talent as a professional, Brady was approaching her mid-20s and searching for direction.

She had already taken the college route into professional sport, playing at UCLA in Southern California. Doing so gave initial life to a career that could have been lost to the drip, drip pain of one painful defeat after another while still a junior.

As Brady recalled: “I took a hit there and thought, ‘OK, maybe I’m not meant for this sport. Maybe I’m not good enough. I’ll go to college for four years and then I’ll find a real job.'”

Geserer is German, and Brady took a leap of faith by leaving Florida behind from July to December last year to train in her coach’s favoured environment, teaching herself to handle homesickness.

“Once you become too comfortable, I think that’s when you’re in trouble,” Brady said. “Going over and training in Germany, at times I might be, like, ‘OK, I wish I was home’. But other times, I’m like, ‘OK, it’s worth it’.

“I have to do what I have to do to become the best tennis player right now and then afterwards I can live my life.”

What. A. Quote. And here’s another…

Brady has a twin, Jessica. On Thursday, Jessica copped one in a Melbourne Park news conference.

Asked whether her sister plays tennis at all, Brady was cheekily brutal, saying that Jessica “gave up” and explaining: “She’s a nerd. She studies. She’s in medical school. So she has the brains and I have the athletic genes.”

And the honesty award goes to @jennifurbrady95 #AusOpen | #AO2021 pic.twitter.com/6RaLaUEcMb

Hunky Dory is at the classier end of Melbourne’s takeaway outlets, and Brady makes no bones about declaring she would order takeout from there while in hard quarantine before the Australian Open began.

Confined to a hotel bedroom for a fortnight, Brady called in orders for “the first seven days, every single day, sometimes twice a day”.

But if delicious deliveries of fast food were on the menu, fast fixes of entertainment emphatically were not.

“I didn’t watch one Netflix series just because I knew if I started something then I wouldn’t want to do anything else except just lay in bed and watch Netflix,” Brady said.

She knows Osaka is ‘magnificent’

She beat the 17-year-old Osaka that day but has lost both their encounters since. It was Osaka, on her way to a third grand slam title, who ended Brady’s US Open run last September.

When a reporter asked Brady at last year’s US Open, ‘Obviously Naomi is magnificent. What makes her so magnificent?’, Brady slung out a raft of compliments.

And this week she cast her mind back to that 2014 clash, recalling: “I was, like, ‘Wow, she hits the ball huge. She’s gonna be good. OK, she’s got something special.'”

She’s not afraid to be afraid, but she’s going to own any fears

Brady knows Saturday’s final is a big deal and it is not her nature to spout “just another game” clichés, as some might.

“I’ll definitely be nervous 100 per cent, but there is no hiding it. I just have to embrace it and enjoy the moment,” she said. “I think I have earned the right to be sitting here, to be playing in a final, in a grand slam final.”

She wants to find focus and to make the biggest moment of her career even bigger. That’s now the Jennifer Brady way.