Virtually everyone has had their say on the bushfire smokes that have been affecting Australia — and incidentally the Australian Open. We wrap up the main interrogations you may have. 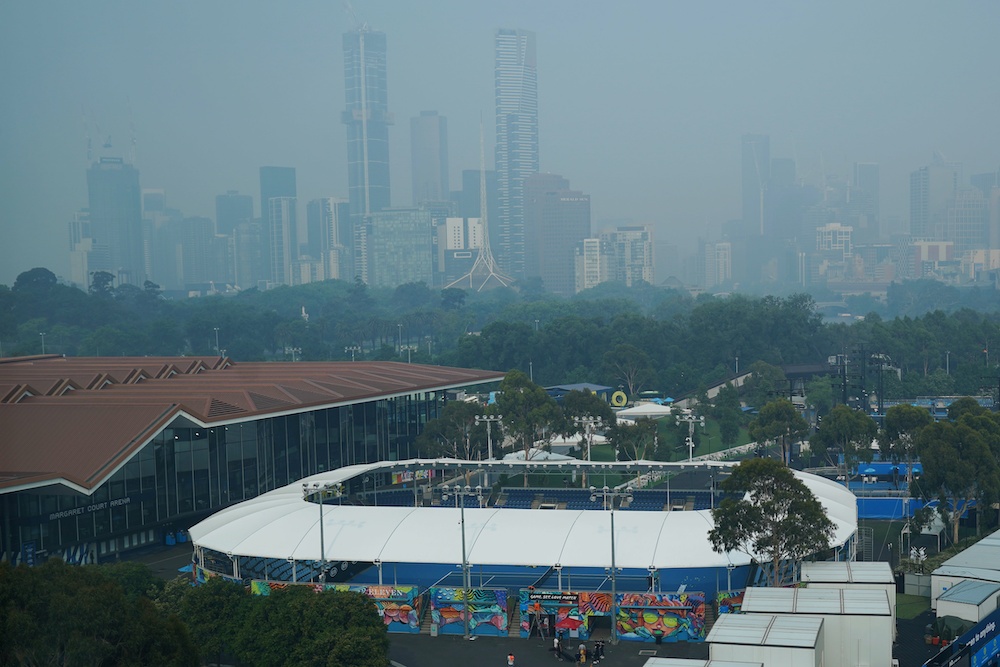 A general view is seen of smoke haze from bushfires at Melbourne Park.

— Is there a chance the tournament is cancelled? —

No. Craig Tiley, the Australian Open director, insisted poor air quality in Melbourne is not a threat to the Australian Open being completed on schedule and defended organisers’ handling of the situation. Tiley insisted the threshold the tournament has settled on beyond which play is deemed too hazardous is lower than at other events, including the Olympics and WTA tournaments.

“We’ve said all along, and I’ll repeat it again, their safety, their well-being, their health, is of priority to us, as it is with our staff and our fans. One thing I can say is this is about trusting the medical advice and the scientific advice.”

— What about Dalila Jakupovic, the Slovenian player that retired mid-match due to a coughing fit on court? —

Dalila Jakupovic has abandoned her #AusOpen qualifying match after suffering a coughing fit while playing in thick smoke caused by the #AustralianFires. pic.twitter.com/WAJv6TzTjW

While the images of Jakupovic laying on her knees on court and coughing uncontrollably have been seen all around the world, Tiley issued the following statement on Thursday.

“We care deeply about the players. I met with Dalila the same day, we’re going to have a follow-up catch-up tomorrow and just reiterate if there’s anything we can do and making sure she’s seeing the medical team and making sure she’s being taken care of. Absolutely we understand the anger. A lot of it comes in the confusion and the complexity of understanding what goes on. We’ve invited the players to come in at any time and have a conversation.”

Fortunately enough, Jakupovic was the lone player to retire because of the bushfire smokes during qualifying.

— How vehement were the reactions from the other players on Monday? —

Well, very vehement in their majority.

So true ! This is not reasonnable. Come on @AustralianOpen @CraigTiley are you really gonna let this happen ?? https://t.co/MzfLYZIcox

Sorry – did I play in a higher intensity version of this yesterday without being medically informed? https://t.co/3ubY5R9uKf pic.twitter.com/oXCkbolNFe

— What do Federer and Nadal think about all of this? —

During Media Day, both Roger Federer and Rafael Nadal were inevitably invited to speak about the bushfire smokes situation — and so they did.

“What can we do about it? Not that much, to be honest. With a situation this big right here now, of course, we can talk to the tournament and see what the situation is. I think they gave their informations back to us now when it’s safe to play, all these things. I mean, I don’t think it’s going to be throughout the entire tournament bad air quality and all that. I think we should be fine.

From what we were told yesterday in the player meeting, the Olympic Games and other competitions have the numbers set at 300. Ours is set at 200. From that standpoint, I think we’re moving in a very safe range. We’re not here for six months straight at over 200, 300, you know. That’s when maybe effects really become bad. No, I don’t worry too much, to be honest. I worry more for everybody else who is in the fire, in the smoke. Also we can stay indoors all day, quickly go out and play, go back in again. It’s not like we’re stuck outside at all times.

Maybe that message comes a bit late after the ATP Cup is over, after qualifying is over. I think communication is key from the tournament to the people, to the media, to the fans, to the players, because you do hear it’s not safe to be outside, keep your pets inside, close your windows. You have court calls, then you look at the haze and everything, it doesn’t look good.

I think we’re going to get through it and it should be fine. It shouldn’t move, no.”

“I don’t have concerns because I am just one more player. When the issue have been there couple of days ago with the qualifier, when I heard the players having issues, asking questions, me like a player, the only thing I can do is go to the tournament director office, ask what’s going on, because I have been practicing that days, too.

I really received, for me – that’s not mean for everyone should be the same – but for me I received an answer that convince me. They told me that they have the right specialists here analyzing and monitorizing every four minutes the air. There is parameters, that with some parameters we don’t play, and with even the right — is over 200, we don’t play, under 200 we normally play. What I receive on the answer is on the ‘Olympic rule’ is until 300 you can keep competing.

I really cannot believe that the most important committee in the world wants bad health for the competitors. So that answer convince me. I am here to play. Hopefully the situation don’t come back to the negative numbers.”

— How will the tournament handle the situation if it affects the completion of the main draw? —

Here is the Australian Open policy re: bushfire smokes. 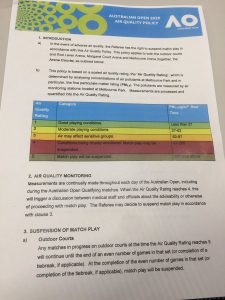