The Bulgarian has all eyes on him in Melbourne after he came on court for his first round in some daring outfits. 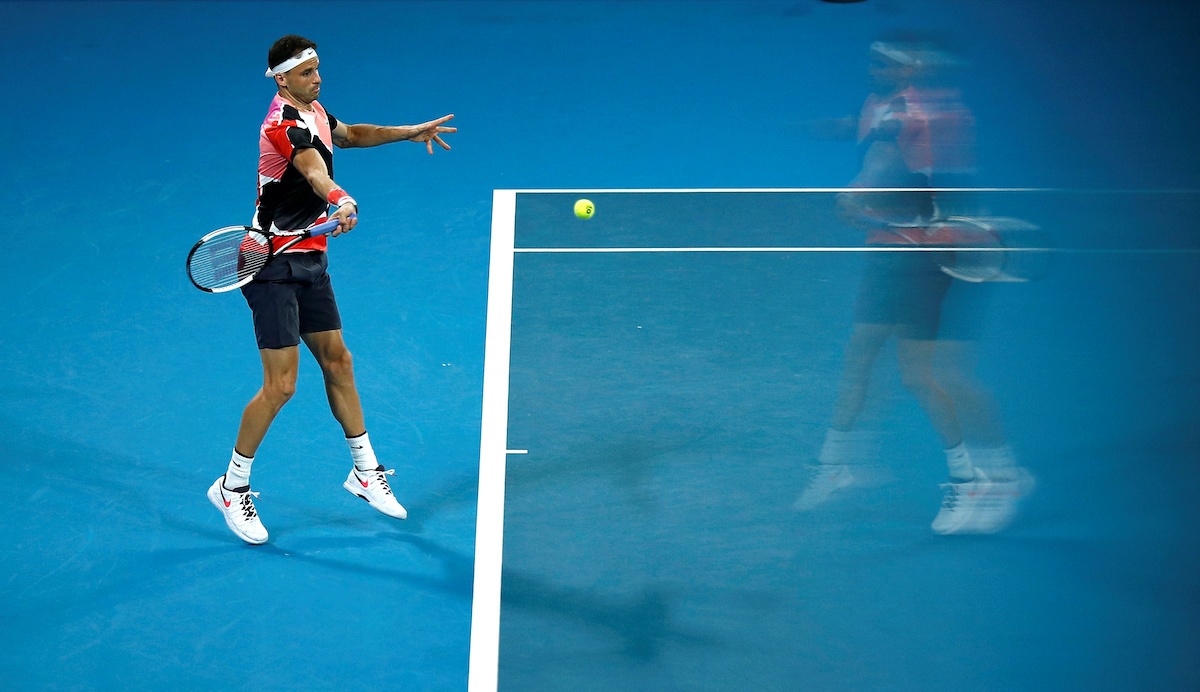 Grigor Dimitrov during the Australian Open first round

As only Tomas Berdych was able to get away with some of the outfits H&M back in the day or Hydrogen more recently put on him, only Grigor Dimitrov could pull this Melbourne outfit off. And of course, he and Nike know it so it’s a good buzz for all involved. When on Monday, the World No. 20 stepped up on the court with a whole tracksuit looking like kind of cute looking pajamas, dark with yellow spots on them, all eyebrows were raised.

Long gone are the days of Andre Agassi’s extravaganza so Dimitrov’s tracksuit rang an alarm signal through the grounds. And then he took it out: and guess what, the WOW or WTF factor was still there. Because suddenly we were watching a T-Shirt looking like a patchwork of pink, white, red, black forms not particularly making sense with each other. But again, on Dimitrov, anything will look fine.

In a day where little matches were played due to the rain, the daring fashion of the Bulgarian was the talk of the tournament. We heard all the reactions, from “why on earth would you put this on the guy” to “where can I buy that tracksuit?”. And when the recent US Open semi-finalist was asked about it later, he started by laughing before asking what we were thinking about it. Always a good sport and a total gentleman, Dimitrov didn’t mind the doubts of some people about the taste of the whole thing. He takes the subject as it should: not too seriously, and for the fun.

“It’s cool no? Friends weren’t sure I was going to wear the whole thing, but it was cold and raining, I had to go to the other side so I was like whatever. But as soon as I walked on the court, I realized I really had the whole outfit on. Nike and I have a bit of fun doing those things. Andre (Agassi, his coach) was really happy about it as well, he was like ‘I know where that comes from!’”

Agassi is still in his coaching team, despite not having been able to make the trip. But Radek Stepanek isn’t anymore. As for the now-infamous tracksuit, every Nike player here has been provided with it but then “it’s your choice to wear the full thing or not”, noted Dimitrov in a laugh. As for that colored-cow like shirt, he absolutely owns it and had a say with Nike about it:

“The shirt is specified for me. I actually love it: I love the colors, I love experimenting as well. I’ve been fortunate with Nike to have a bit of my input in this. It is a sort of fashion statement! I always thrive to something different, I love being different when it comes to things like that. It’s fun, I don’t wanna be vanilla.”

Oh, rest assured, Grigor: it won’t ever be the case.

If he had fun in the designing room, Dimitrov didn’t have much fun this winter with his game. In order to find a lasting solution right shoulder pain, they decided to change a few things in his racquet. And as everybody knows: tennis players hate it when anything changes with their racquet.

“The lead-up to the tournament has been a bit up and down so I knew I wasn’t going to be on my A-Game. I did quite a bit of unforced errors, was unable to find my distance to the ball too well. But It’s important to stay within yourself. Physically, I’ve done plenty. I did a couple of changes in my racquet because of my shoulder, and it’s so sensitive for a tennis player when you touch something in the racquet. If you miss a ball, you start blaming the racquet. It’s not easy, I’m still missing some balls I shouldn’t. But it’s how it is. Fail and fail until you make it.”

Tennis has to be glad that the US Open saved the ranking and maybe the rest of the career of Grigor Dimitrov – who before that was stuck in a rough patch – because not only he is one of the greatest talents out there but he’s one of the very few who has a classy sense of entertainment with lots of perspective on this world. You’ll find him checking art in galleries, shopping, reading, getting interested in some musician nobody has ever heard of, or invested in a book. And yes you’ll also find him wearing absolutely horrific stuff on a tennis court with the power to make this stuff look good. Let’s hope Nike gives him a good share of the sales of that last outfit because seriously: only this guy can sell it.