Sofia Kenin fought back from a set down to beat two-time grand slam winner Garbiñe Muguruza to win the Australian Open title and with it, claim her first grand slam title. 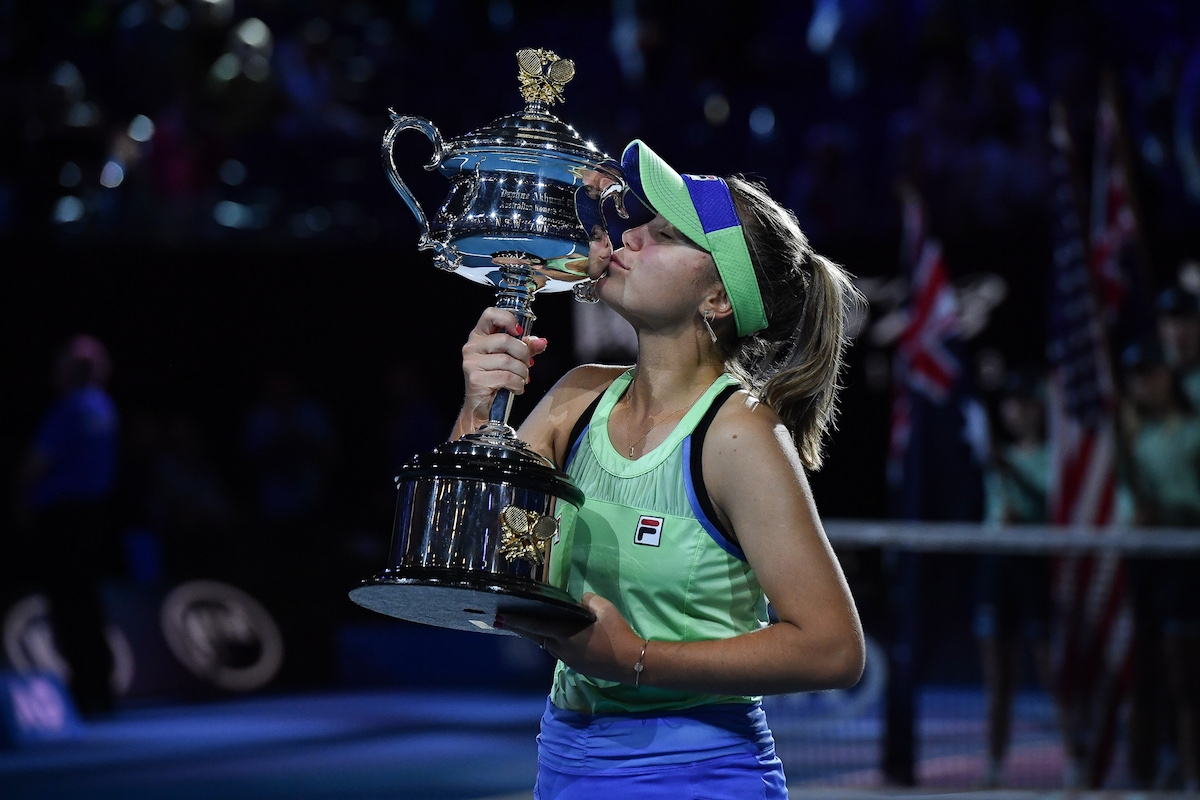 It was a nerveless display for one appearing in her first major final, especially after the disappointment of dropping an opening set that could have gone either way, the Russian-born American winning 4-6, 6-2, 6-2.

After raising the Daphne Akhurst Memorial Cup aloft to the cheers of the crowd, an emotional Kenin explained just what it meant to be a grand slam champion.

“I just want to say my dream has officially come true, I can’t even describe this feeling, it’s so emotional and I’ve worked so hard and I’m just so grateful to be standing here. Dreams come true, so if you have a dream, go for it and it’s going to come true.”

Kenin flew out of the blocks, showing no signs of the nerves that affected her semi-final opponent and home favourite Ashleigh Barty to confidently hold to 15 in the opening game before immediately putting pressure on the Muguruza serve.

But the Spaniard is not a two-time slam winner for nothing, and started to find her rhythm off the ground, pummelling huge groundstokes to fashion the opening break in a long third game. Even successive double faults didn’t throw her off her stride, holding off a break point to extend her advantage before holding firm, a brutal 23 shot rally in the sixth game showing her younger opponent that she would not be bullied in the face of some fierce hitting.

Just as styles make boxing matches, it soon became apparent that this final could develop into a classic, one of power hitting against counter-punch and guile, Kenin using all of her armoury of slice and drop shots to dig herself out of a hole at 0-40 to hold and stay in the set at 4-3. It was a big moment, the American breaking back after a double-fault gift from her opponent.

Signs of nerves from Muguruza? If there were, she did well to disguise it, the Spaniard hitting freely and coming forward to break again before serving out confidently for a one set advantage. Time for a bathroom break for Kenin to reset and gather her thoughts. Just as Andy Murray stared himself in the mirror at 2-2 in the 2012 US Open final, perhaps the American did the same, telling herself to grasp this most important of opportunities.

It appeared to do the trick, a wobbly Muguruza service game allowing the American to break for 3-1 and take a stranglehold in the second set and a further break confirmed the alarming momentum switch as Kenin hammered home her advantage to take the set 6-2 and level the final.

The last time the pair met, it was Kenin who came out on top in another three-setter, winning 6-0, 2-6, 6-2 in their only previous meeting, in Beijing last September. Yet again, this battle would go the distance, but with much more at stake than that first round encounter in China.

And again, it was Kenin who grabbed the third set initiative, a pivotal hold from 0-40 in the fifth game of the decider proving the decisive moment in the match. It seemed to break the will of the Spaniard, who threw in a double fault to let slip a 40-0 lead of her own and leave the American on the brink of victory at 5-2, inside out improvised slices and topspin passes the shots of an exhibition match, rather than a grand slam final.

Nerves clearly getting the better of the more experienced woman, it was Muguruza making mistakes, another double fault followed by a Kenin winner setting up championship point. And, at the second time of asking, Kenin was home, yet another double gifting her the title.

Perhaps not the fitting way to win after such a polished performance but not that Kenin will care after a deserved victory.

Muguruza, who won the 2016 French Open and Wimbledon in 2017, would dearly have loved to have added the Australian Open title to her collection but was humble in defeat afterwards.

“I think I’m going to keep it short, because I’m going to get very emotional,” said Muguruza after her defeat. “Congratulations, Sofia, I think you played an incredible match, incredible tournament. You deserve the trophy. I think we’re going to see you play more finals for sure. I have to start thanking my team. It’s an individual sport but I will never be here without them. They are over there, suffering with me today. It has been incredible playing out here in this environment.

“This court brings an energy and the crowd is what makes it special because we play for you guys. Thank you for coming. Almost our favourite grand slam, I have to say.”

This year’s women’s tournament has been enthralling and perplexing in equal measure. From the shock exits of Serena Williams and Naomi Osaka at the hands of rising star Coco Gauff to the surprise final that will live in the memory.

The rise and fall of Muguruza, in particular, has been a story in itself. From the highs of French Open and Wimbledon glory, the Venezuelan-born Spaniard suffered an alarming drop in form and confidence, plummeting to 36th in the world only two years after she was ranked world number one.

But having reunited with former coach Conchita Martinez, also a former Wimbledon champion and Australian Open finalist, this tournament may just be the fillip she needs to get back to where she belongs.

Nothing but respect ❤️