On this day in tennis history, one young American beat a compatriot to win his first Masters title. Look back on how he did it. 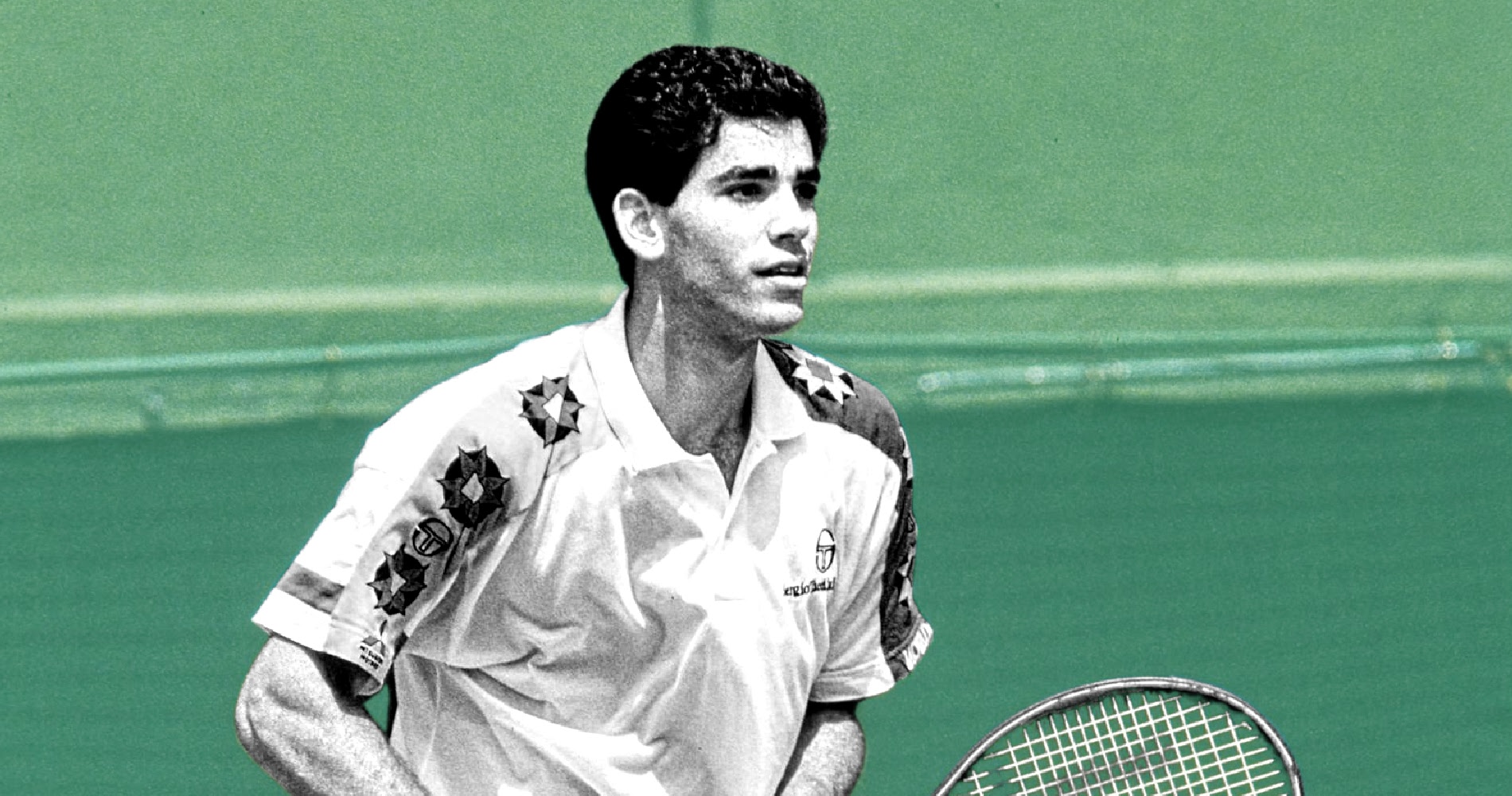 On this day, November 17, 1991, in Frankfurt, Pete Sampras beat Jim Courier in the final (3-6, 7-6, 6-3, 6-4) to claim his first title at the Masters Cup. For the young American, who had lost his US Open crown two months before – to the same man – it was a relief to win such an important title after a hard year. It was also the first of five titles claimed by the future world No 1 at the year-end Masters Cup, which would be a record at the time.

Pete Sampras was born in 1971. Although he was a part of a golden American generation, along with Andre Agassi, Michael Chang and Courier, he was the last of them to become a top player. At the end of 1989, while his rivals had all claimed titles and achieved remarkable Grand Slam performances, Sampras was only No 81 in the world. In November that year, Ivan Lendl, world No 1 at the time, invited him to his house to practise with him for ten days: the young American then realised what kind of work ethic were required to become a champion. 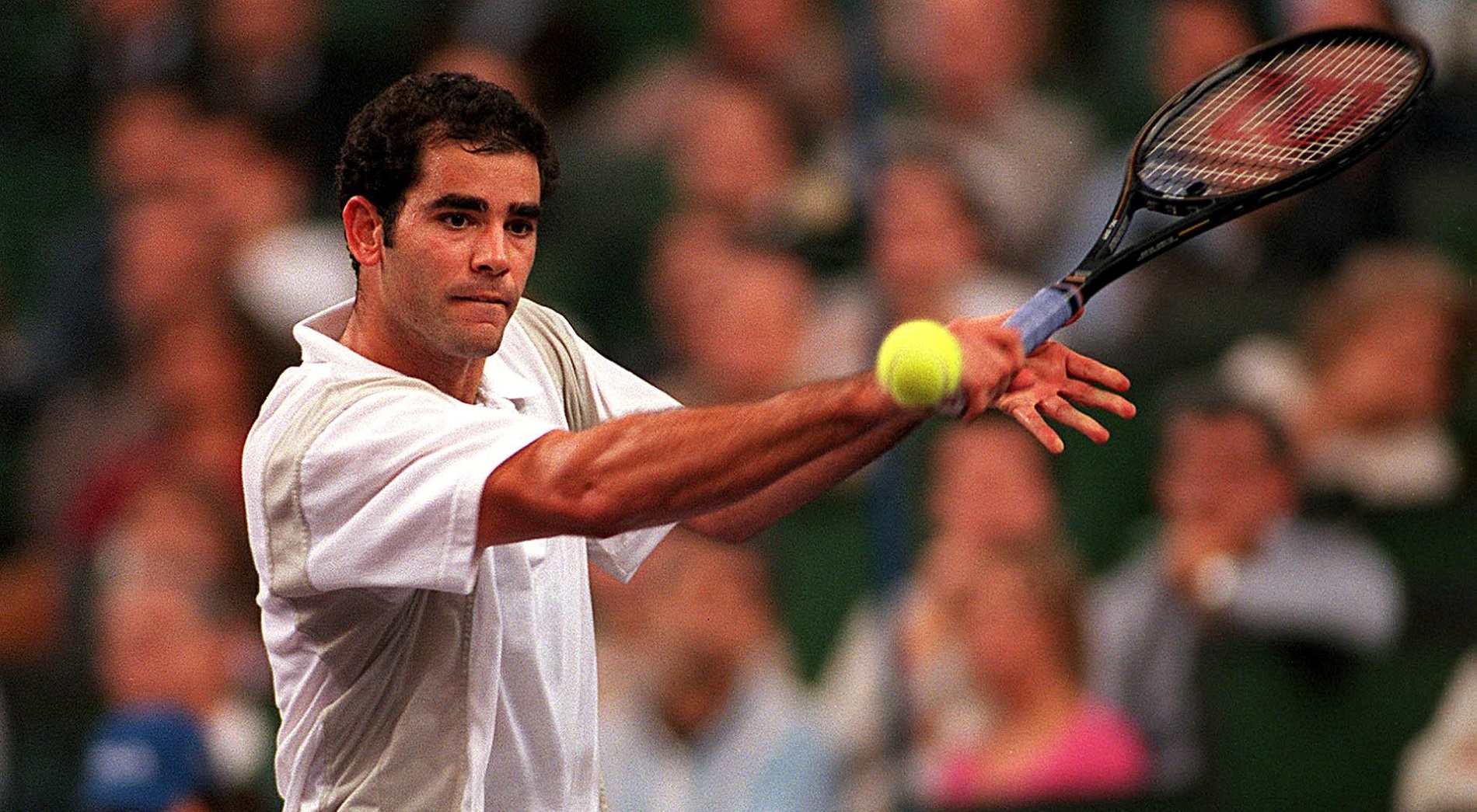 Six months later, he had already broken into the top 20 after having claimed his first two titles in Philadelphia and Manchester. In September 1990, he took the world of tennis by surprise by becoming the youngest player to ever triumph at the US Open, defeating Agassi in the final (6-4, 6-3, 6-2). Thanks to this great win, he entered the top 10, but in the first half of 1991, Sampras struggle to confirm his new status. Since the beginning of the American summer tour, he had obtained better results, triumphing in Los Angeles, Indianapolis and Lyon, but he had lost his US Open title, defeated by Courier in the quarter-finals (6-2, 7-6, 7-6).

Born in 1970, Jim Courier was one of many players that developed at the Nick Bollettieri tennis academy in the 1980s. He developed quite an unconventional game, using western grips and short backswings often compared with baseball motions, which matched his trademark cap. His big serve and his inside-out forehand were his favourite shots, and he was famous for his work ethic, commitment and fitness. He was part of a young American big four which made a big impression on the tour: Agassi, who was in the top 10 since 1988, Chang, who had already triumphed at Roland-Garros, and Sampras. In 1989, Courier reached the fourth round at the French Open, after defeating Agassi, then the world No 5 (7-6, 4-6, 6-3, 6-2), and, a few months later, he claimed his first title in Basel (defeating Stefan Edberg in the final 7-6, 3-6, 2-6, 6-0, 7-5). 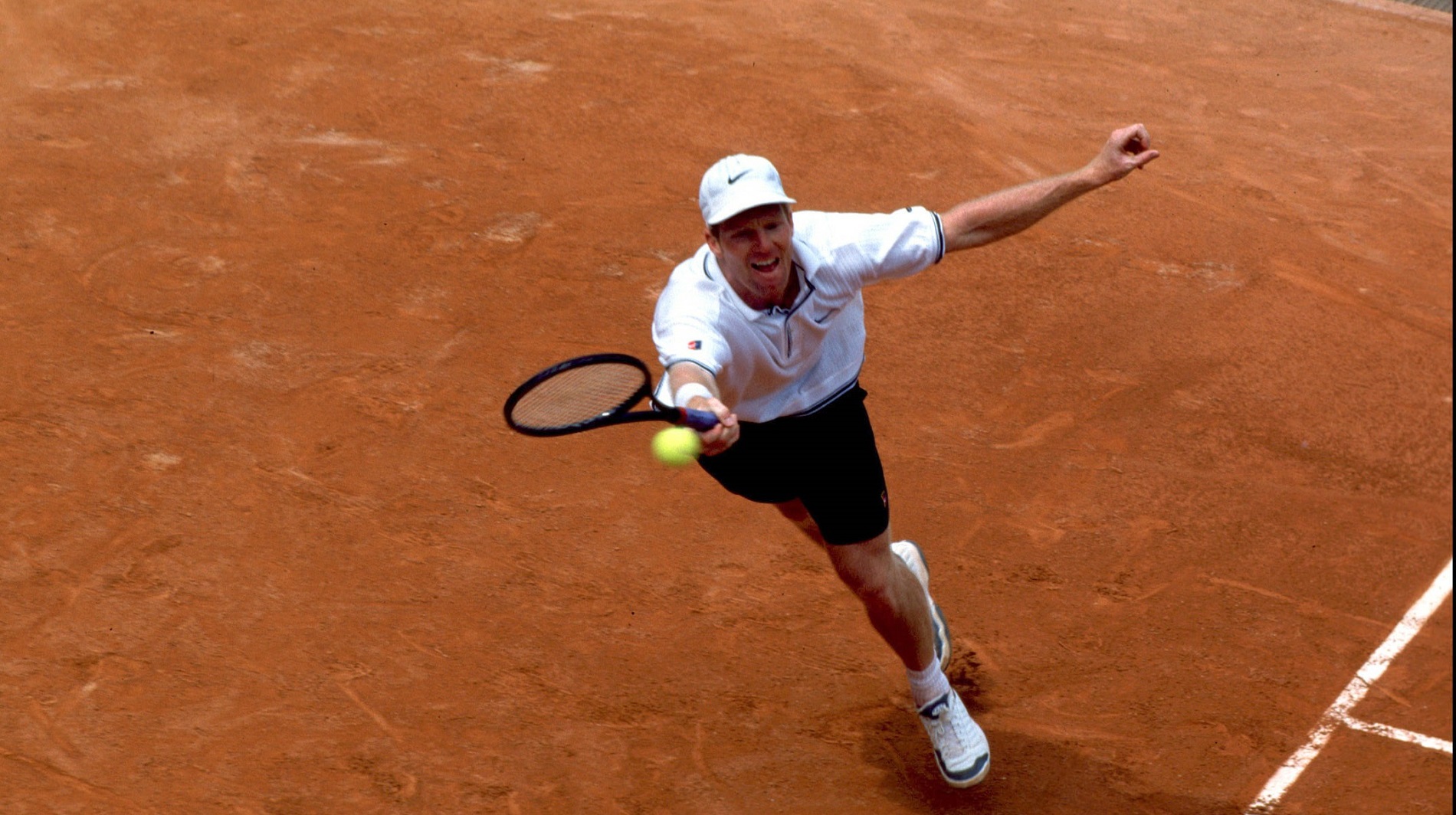 Founded in 1970, the year-end Masters Cup was the final showdown between the eight best players in the world. Held in a different location every year at the start, in settled at the Madison Square Garden, in New York, from 1977 until 1989.  Then, in 1990, the tournament moved to Frankfurt, in Germany, where the Festhalle would host 13,500 spectators. As only the eight top players of the year qualify for the event, the list of its former champions is nothing short of impressive. 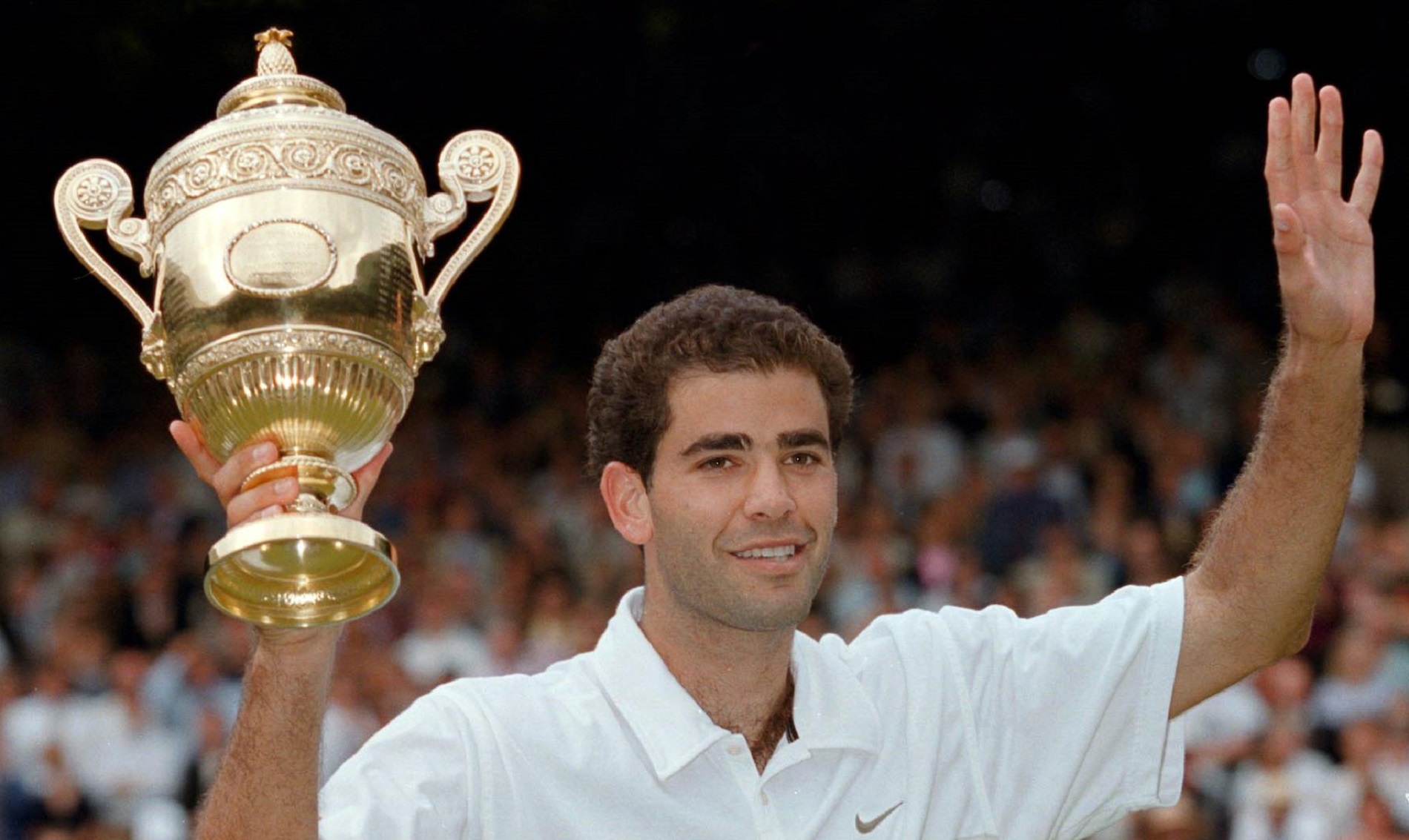 In November 1991, despite their young age, Pete Sampras and Jim Courier already had quite a history. They had already faced each other four times, and although Sampras had won their first three encounters, Courier had prevailed in the last one, in the US Open quarter-finals, where Sampras was the defending champion. After his loss, Sampras said he was more relieved than disappointed and that he felt like “a ton of bricks” was lifted from his shoulders. Jimmy Connors and Courier, among others, criticised him.

“Really, how much pressure does Pete have?” Courier said. “He will never have to work another day in his life. He has got millions in the bank.”

Both players had had a very different 1991 experience so far. Sampras had struggled with celebrity and expectations since his surprising triumph at the 1990 US Open, but, since August he had won 32 matches and lost only five. Courier had had his greatest year: after having triumphed at Roland-Garros and finished runner-up at Flushing Meadows, he was world No 2, and, in the absence of the world No 1 Stefan Edberg through injury, he was the first seed at the Masters Cup. The United States Davis Cup team qualified for the final against France in December, and Sampras had been preferred to Courier because of the fast indoor surface.

The final didn’t start in the best way for Sampras, who lost the first set, 6-3, and, in the second set, he broke Courier at 6-5, only to be broken back in the following and being pushed into a dangerous tie-break. Sampras obtained a first point at 6-4, but he double faulted. Luckily for him, Courier took too much risk on a forehand attack on the next set point and hit the net – one set all.

The 1990 US Open champion then took a hold on the match and won the next set, 6-3, 6-4. He had just added a second major title to his list of achievements. He didn’t stop there.

“Winning any victory gives me a lot of confidence,” said Sampras, looking back on his run to the final and beating Stich, Agassi and Ivan Lendl. “But this one is a little special. I beat a lot of tough guys.”

Courier would reach world No 1 in February 1992, and he would spend a total of 58 weeks on top the rankings. He would claim four Grand Slam titles in less than two years (adding the 1992 French Open as well as the 1992 and 1993 Australian  Open to his first crown), Courier’s career would decline after his loss in the Roland-Garros final in 1993 (defeated by Sergi Bruguera, 6-4, 2-6, 6-2, 3-6, 6-3). In the last five years of his career, he would only claim five of his twenty-three career titles. In 2000, his ranking dropped to No 67, and his motivation was at its lowest, which pushed him to quit professional tennis. In total, Courier would spend 58 weeks on top of the ATP rankings.

Pete Sampras would become world No 1 in 1993. He would set a record of 14 Grand Slam titles claimed during his career, triumphing seven times at Wimbledon, five times at Flushing Meadows and twice in Australia, but at Roland-Garros, his best performance would remain a semi-final reached in 1996. He would also win the Masters Cup no less than five times, and he would spend 286 weeks as world No 1. Although most of his amazing records would seem unbeatable at his retirement, in 2003, most of them would be beaten by Roger Federer in the following decade. That is, all but one: between 1993 and 1998, Sampras would finish six consecutive years as world No 1, a record which not even Federer, Nadal or Djokovic would manage to challenge.