June 8, 1997: The day Gustavo Kuerten came of age on the Roland-Garros clay

Every day, Tennis Majors takes you back in time to relive a tennis event which happened on this specific day. On June 8, 1997 Gustavo Kuerten came from out of nowhere to claim Grand Slam glory in Paris 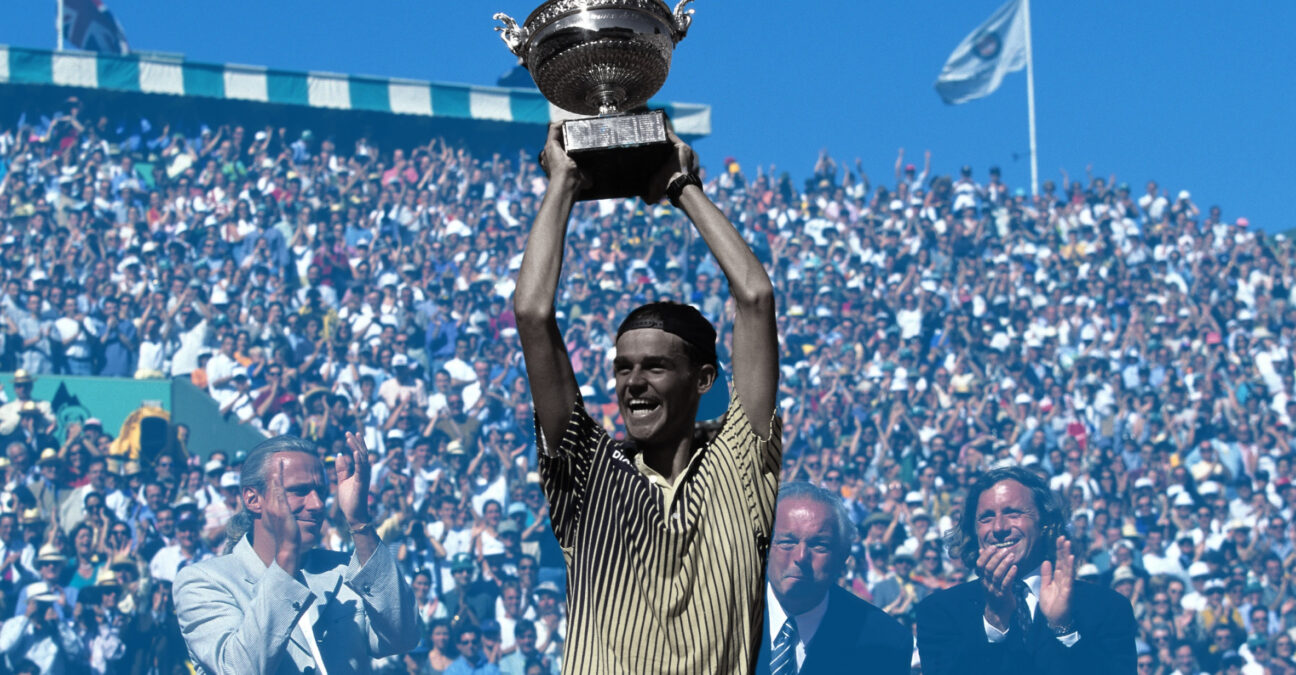 On this day, June 8, 1997, Gustavo “Guga” Kuerten, 20 years old and ranked No 66 in the world, crushed former champion Sergi Bruguera in the Roland-Garros final to claim his first Grand Slam title. Totally unknown to the public at the start of the tournament, Kuerten seduced the crowd with his humble attitude and his fighting spirit, after defeating the two last Roland-Garros champions, Thomas Muster and Yevgeny Kafelnikov, both in five sets on his way to the final. It was the first stage of a love story between Kuerten and Roland-Garros, where he would win two more titles in the future.

Gustavo Kuerten was born in Brazil in 1976. He had turned pro in 1995, and he entered the top 100 in August 1996, after two promising wins on clay against world No 21 Alberto Berasategui and world No 22 Carlos Moya. In early 1997, his best results had been beating Andre Agassi, ranked No 14 at the time, in Memphis, and reaching the round of 16 at the Indian Wells Masters. After five disappointing tournaments during the European clay court season, he had decided with his coach to go back to Brazil before Roland-Garros to compete in an ATP Challenger event, in Curitiba, which he won without facing a single top 100 player. Arriving in Paris, he was ranked No 66 and so unknown to the general public that not even one Brazilian journalist had travelled to France to follow the event. 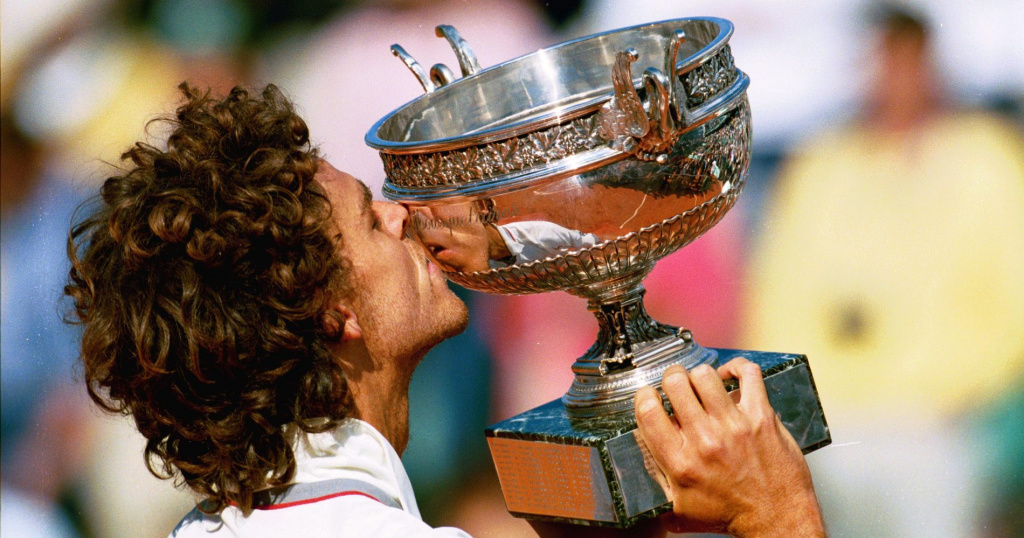 Sergi Bruguera, born in 1971, made himself known to the general public at Roland-Garros in 1990, when, aged 19 and ranked 46, he defeated world No 1 Stefan Edberg in the first round (6-4, 6-2, 6-1). A clay-court specialist, he had claimed 14 titles through his career, only one of these on hard court, in Bordeaux, in 1993. He relied mostly on heavy topspin on both sides, with western grips and a very consistent backhand which he almost never missed. His game was so defensive that he was used to skipping the grass-court season and had only played three times at Wimbledon since the start of his career.

The story took place at Roland-Garros, Paris. The stadium, located in the west of Paris at the edge of the Bois de Boulogne forest, had been hosting the French Grand Slam since 1928. It was the first and now the only Grand Slam to be played on clay, the slowest surface, which made it the hardest tournament to win from a physical perspective. It was the perfect place to perform for baseliners using a lot of topspin like Bruguera. Kuerten had participated only once at Roland-Garros, in 1996, and was defeated in the first round by world No 11 Wayne Ferreira (6-4, 7-5, 7-6).

As for Kuerten, no one could have predicted his presence in the Roland-Garros final. Aged 20, the world No 66 had never even reached an ATP final before. With no hiccups, he made himself famous by defeating the 1995 champion and clay-court terror Thomas Muster in the third round (6-7, 6-1, 6-3, 3-6, 6-4).  Kuerten needed magic to score the victory; the Austrian had a 3-0 lead in the fifth set. In the fourth round, the Brazilian survived a second five-set battle against Andrei Medvedev, before edging the defending champion and world No 3 Yevgeny Kafelnikov in the quarter-finals, again in five sets (6-2, 5-7, 2-6, 6-0, 6-4). His game, relying on an efficient first serve and an impressive one-handed backhand, made him a natural clay-court player. With his toothy smile, colourful clothes and attractive game, Kuerten soon became the crowd’s favourite.

In the final, Kuerten played close to perfection. Hitting the ball much earlier than Bruguera, he did not seem troubled by the Spaniard’s heavy spin, and soon he dictated the game and hit multiple winners. For Bruguera and players of his game style, this match was a sign that the era of extra defensive players had come to an end: against a player like Kuerten, who could be patient as well as employ a lot of spin while also hitting the ball on the rise, the former Roland-Garros champion was clueless. After only one hour and 50 minutes of play, Kuerten had outplayed Bruguera 6-3, 6-4, 6-2 to be the new Roland-Garros champion. On his way to becoming the first unseeded player since Mats Wilander in 1982 to win the tournament, he had beaten the three last Roland-Garros champions, Muster, Kafelnikov and Bruguera.

What next? Kuertens wins two more titles in Paris while Burguera

Kuerten would finish 1997 as world No 14. He would have trouble maintaining his new status in 1998 and his results on hard courts would be disappointing. In 1999, he would become a more consistent player and in 2000, his peak year, he would prove wrong those who claimed that his 1997 Roland-Garros victory was a fluke. Kuerten would collect a second Roland-Garros crown in 2000, defeating Magnus Norman in the final (6-2, 6-3, 2-6, 7-6). The same year, after an incredible triumph at the Masters Cup, where he would defeat both Andre Agassi and Pete Sampras on fast indoor courts, he would finish the year as world No 1, edging out Marat Safin at the last minute.

In 2001, Guga would claim a third Roland-Garros title, beating Alex Corretja in the final (6-7, 7-5, 6-2, 6-0). The rest of his career would be a long struggle against a repetitive hip injury, which he would faill to overcome. His farewell appearance at Roland-Garros would come in 2008 and he would be defeated in the first round by Paul-Henri Mathieu (6-3, 6-4, 6-2).

Reaching the 1997 Roland-Garros final would be Bruguera’s last standout result. After a fourth-round effort the same year at the US Open (lost to Marcelo Rios, 7-5, 6-2, 6-4), he would never go past the second round of a Grand Slam tournament again, nor would he claim another ATP title. Struggling with injuries, he would leave the top 100 in the second half of 1998, only to come back in October 2000 as the world No 97. He would then climb back to No 60. For his last appearance at Roland-Garros, in 2001, he would retire at the start of the fourth set in his second-round match against Michael Russell, suffering from heat stroke. Bruguera would eventually retire from professional tennis in the summer of 2002.