Novak Djokovic gives an interesting press conference following his third-round victory at the French Open on Saturday. Andrey Rublev and Danielle Collins are also through to the second week. 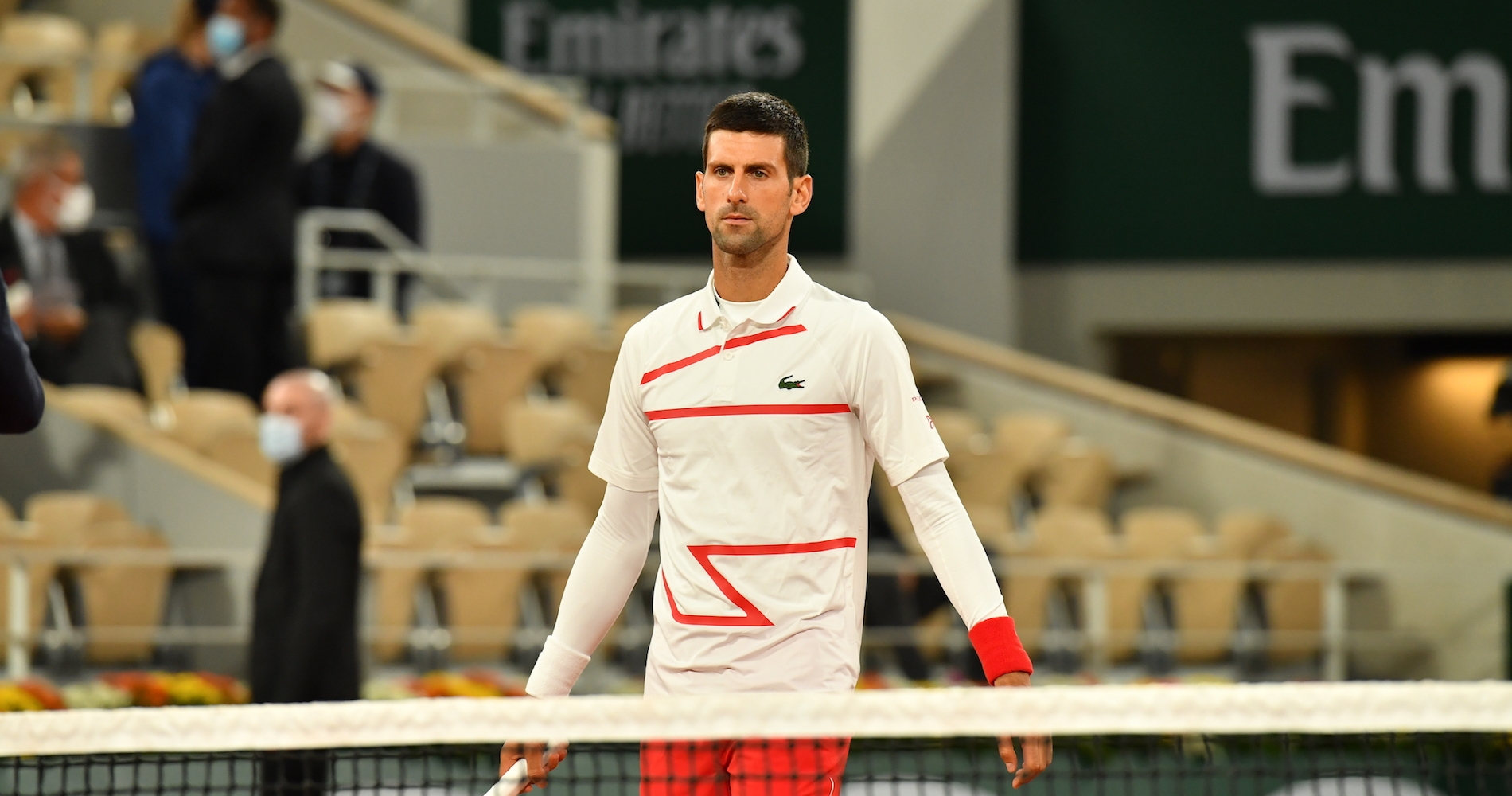 The first week of the French Open came to an end on Saturday, when mostly straightforward matches took place on the men’s side. There was one big surprise in Daniel Altmaier upsetting Matteo Berrettini, but Novak Djokovic, Stefanos Tsitsipas, and Andrey Rublev were among those who continued to take care of business without any trouble.

On the women’s side, there was plenty of drama. Fiona Ferro treated the French crowd to a three-set victory, while the nightcap saw Danielle Collins make an improbable third-set comeback at the expense of Garbine Muguruza.

Man of the day: Rublev remains on a roll

Rublev captured the Hamburg title on the same day the French Open began. Nonetheless, the red-hot Russian is showing no signs of slowing down in Paris. Since losing his first two sets of the tournament to Sam Querrey, Rublev has won nine of his last 10 sets. After recovering from two sets down and 5-2 down in the third against Querrey, the world No 12 beat Alejandro Davidovich Fokina in four and then crushed Kevin Anderson 6-3, 6-2, 6-3 on Saturday afternoon.

Rublev needed only one hour and 34 minutes to advance past the two-time Grand Slam runner-up. He won an incredible 89 percent of his first-serve points, struck six aces compared to one double-fault, and did not face a single break point.

Picture perfect.@AndreyRublev97 marches his way into the fourth round with a straight sets win over Anderson.#RolandGarros pic.twitter.com/buQajbqwRV

Next up for Rublev is Marton Fucsovics, a straight-set winner over Thiago Monteiro.

“When we played (2017 Davis Cup playoffs), I won in five sets — but we were different players,” Fucsovics said of his head-to-head match-up with Rublev. “Right now he’s just about to break in the Top 10…. But I am more mature (now). I have more experience; I’m fit now, fitter than ever. I’m looking forward to play a good match against him; try to break through finally to the quarter-finals. I’m very happy to compete against these guys. Finally, I can show that I can beat them. I can beat the top 10 players; I can beat the next superstars of tennis. This gives me a lot of confidence. Now I believe that I can also make it to the top 10.”

Woman of the day: Collins capitalises on Muguruza collapse

Muguruza and Collins started their match on Court Suzanne-Lenglen. Only 12 minutes into it, however, the skies opened up and therefore the only court on which they could finish was Philippe-Chatrier. Thus the two players waited for Djokovic to finish off his match against Daniel Elahi Galan, after which the women moved from the No 2 showcourt to top billing.

A late-night showdown on Chatrier saw Collins take the first set before Muguruza hit back in the second. That set the stage for a dramatic third, although for a moment it looked like Muguruza would take it with ease. The two-time Grand Slam champion led by a double-break at 3-0 and even had two game points on her own serve for 4-0. Collins, though, always has a never-say-die attitude and it was once again on display in this contest. The American, ranked 57 in the world, stormed all the way back to prevail 7-5, 2-6, 6-4 in a total of two hours and 26 minutes.

Fiona Ferro, the lone Frenchwoman remaining in the bottom half of the draw, battled past Patricia Maria Tig 7-6(7), 4-6, 6-0 in two hours and 48 minutes. Although the crowd capacity at Roland-Garros has been severely reduced this year, an enthusiastic throng of fans enjoyed this showdown inside Court Philippe-Chatrier. And they undoubtedly played a part in the outcome, helping Ferro survive a tense first set and ultimately driving her to recover after losing the second set.

The best moments of the third round match between Ferro and Tig 👇#RolandGarros pic.twitter.com/gwHS1cGEk4

The 23-year-old, who ranks 49th in the world, will face Australian Open champ Sofia Kenin in the round of 16 on Monday. Ferro and Caroline Garcia are the last two host-nation hopefuls in the women’s draw.

Surprise of the day: Altmaier advances for improbable fourth-round spot

So far those efforts are working out quite well for both up-and-comers.

Altmaier joined Korda in the second week by stunning No 8 seed Matteo Berrettini 6-2, 7-6(5), 6-4 to begin Saturday’s schedule on Philippe-Chatrier. The 22-year-old German struck more winners (23) than errors (21) and dropped serve only once while benefiting from an error-stricken performance by Berrettini.

Wawrinka even acknowledged Altmaier’s performance — and point to the head — on Twitter.

Picture of the day: The man in front of the mask 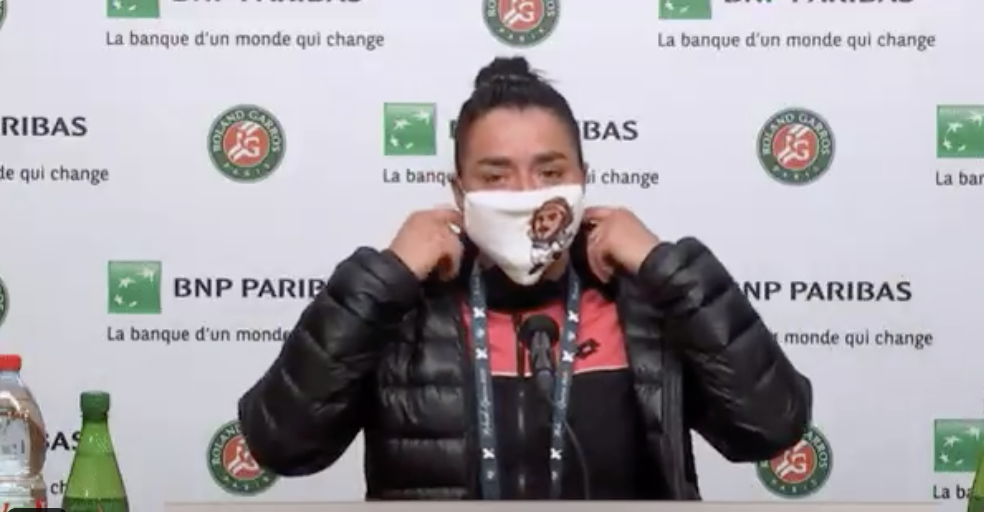 Who was that guy on the front of Ons Jabeur’s mask following her victory over Aryna Sabalenka? Well, that was none other than an image of Stefanos Tsitsipas.

“It’s Tsitsipas,” Jabeur assured observers when asked about her mask. “I asked for it. He was like, ‘No way you’re going to wear it.’ Of course I’m going to wear it. I’m Team Tsitsipas. (I) actually stole it from [his] team.”

“I didn’ t believe she would wear it,” Tsitsipas said afterwards. “I was wrong! I thank her for doing it.”

It is understandable that Jabeur was in a great mood during her post-match press conference. With her 7-6(7), 2-6, 6-3 upset of the eighth-seeded Sabalenka, the 30th-ranked Tunisian became the first-ever Arab woman to reach the fourth round at Roland-Garros.

Point of the day: Not easy to win a point vs. Djokovic

Galan obviously did not pull off an upset against Djokovic, but the little-known Colombian at least managed to come up with one moment of magic. On the third point of the third set, Djokovic had his opponent on a string, basically running circles on all of the court. It ended in unexpected fashion, as Galan — even laughing the whole way — tracked down a Djokovic lob and sent his backhand pass reply scurrying past the top seed for an amazing winner.

The smile. The shot!

Quote of the day: Djokovic has had enough of linespeople

Djokovic is ready for linespeople to be done away with — and not just because he got defaulted out of last month’s US Open for hitting one with a ball. The Hawkeye technology is there, and instantaneous calls via electronics is a system that has been tried out (with plenty of success) at various tournaments. The top-seeded Serb is ready for it to be implemented at every event.

“With all my respect for the tradition and the culture we have in this sport, when it comes to people present on the court during a match, including line umpires, I really don’t see a reason why every single tournament in this world — in this technologically advanced era — would not have what we had during [the Cincinnati Masters],” he commented.

“Yes, ball kids, of course, ball person, yes, but line umpires, I don’t see why any more, to be honest. Maybe you can tell me if there is any significant reason why we should keep other than tradition that we had and have in this sport. Then,” he concluded with a smile, “I would also probably then have less chances to do what I did in New York.”

Week two and round four get under way on Sunday, when seven of the eight singles matches on both the men’s and women’s sides will take place on either Philippe-Chatrier or Suzanne-Lenglen. Only one of the four women’s matches is set for Simonne-Mathieu.

Here are the men’s and women’s singles draws heading into week two of the season’s final Grand Slam. And here are the eight singles match-ups on Day 8: