Every day, Tennis Majors takes you back in time to relive a tennis event which happened on this specific day. On this day, July 9, 2001, Goran Ivanisevic finally won Wimbledon, having lost in the final three times. 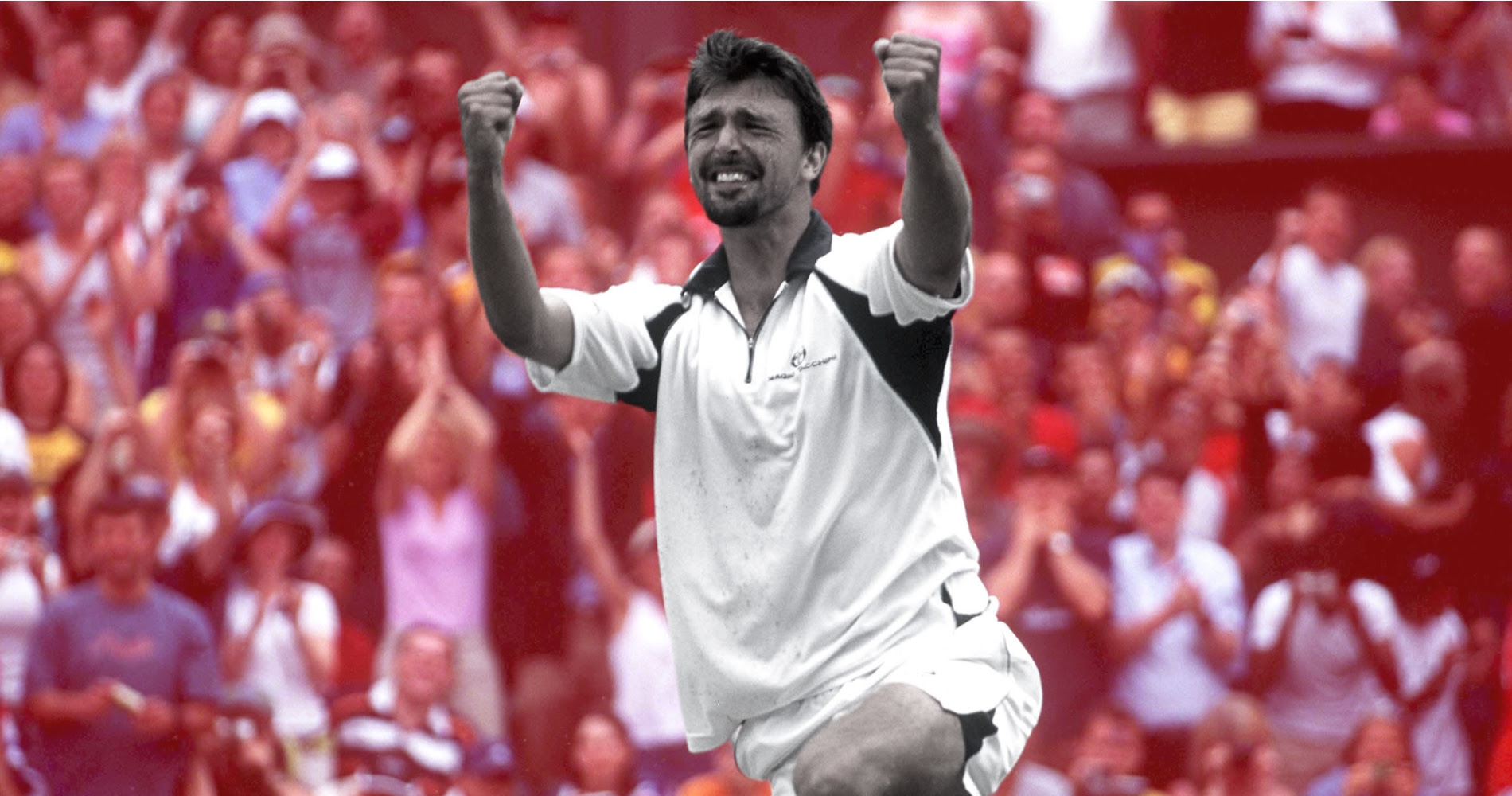 On this day, July 9, 2001, Goran Ivanisevic, who had previously lost three times in the final, finally triumphed at Wimbledon after a thrilling five-set combat against Patrick Rafter (6-3, 3-6, 6-3, 2-6, 9-7). Ivanisevic, on the verge of tears, finally managed to master his nerves in one of the most emotional final games in tennis history. The Croat, whose ranking had dropped to No 125, was the first player to win a Grand Slam title after receiving a wild card to enter the main draw.

Goran Ivanisevic was born in 1971 and had his breakthrough year in 1990, at the age of 19. That year, he made himself famous by reaching the quarter-finals at Roland-Garros after defeating world No 3 Boris Becker in the first round, just before reaching the Wimbledon semi-finals, where Becker defeated him (4-6, 7-6, 6-0, 7-6). In 1991, his season was disturbed by political issues; his country, Yugoslavia, was ravaged by civil war and he couldn’t focus on tennis. In 1992, he came back to the top and, firing 206 aces during the tournament, he reached the Wimbledon final where he was defeated in five sets by Andre Agassi (6-7, 6-4, 6-4, 1-6, 6-4). In the five following years, Ivanisevic remained a solid top 10 player, claiming 14 titles and reaching at least the quarter-finals in every Grand Slam tournament. In 1994, after reaching a second Wimbledon final (lost to Pete Sampras, 7-6, 7-6, 6-0), he obtained his highest ranking as world No 2. Left-handed, his attacking game relied mostly on a huge and an extremely precise serve – in 1996, he served an unbroken record of 1,477 aces in one season. Ivanisevic was also known for his emotional outbursts and his habit of smashing an unusual number of racquets. In 1998, he suffered a heartbreaking third loss in the final at Wimbledon, where he was close to leading two sets to love before he was edged out again by Sampras (6-7, 7-6, 6-4, 3-6, 6-2). Devastated by this defeat, which he called “the worst moment of his life”, Ivanisevic would not win a single tournament in the next 24 months and he would see his ranking drop as low as No 134 in November 2000. In 2001, he did not achieve any better result than reaching the quarter-finals in Milan (lost to Roger Federer, 6-4, 6-4). 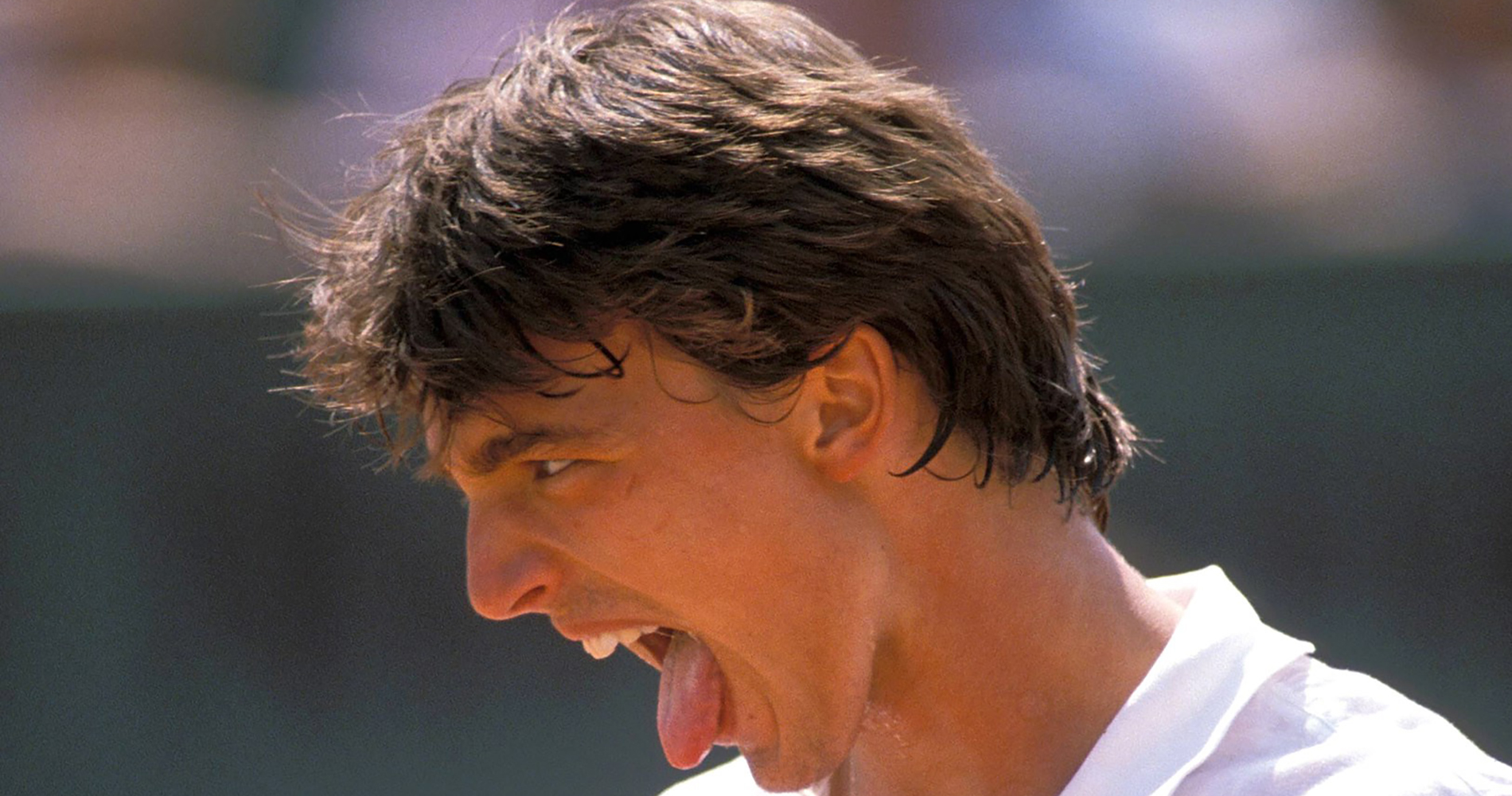 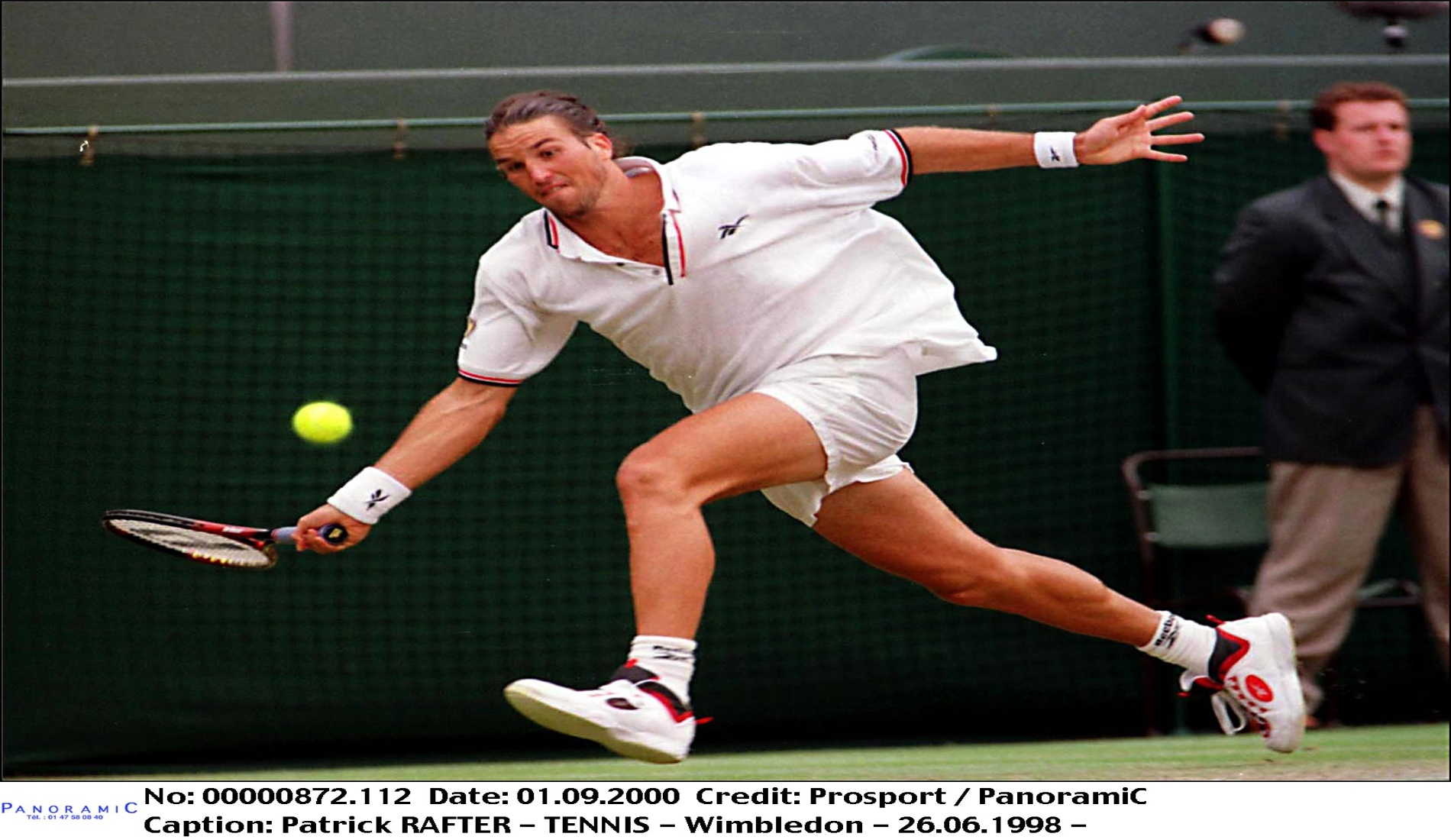 Wimbledon is the oldest and the most prestigious tennis tournament in the world. Held by the All England Lawn Tennis and Cricket Club since 1877, it moved into its current location in 1922, the same year when the Centre Court was built. Considered by many as the most intimidating court in the world, with its famous Rudyard Kipling quote above the entrance (“If you can meet with triumph and disaster and treat those two impostors just the same”), the Centre Court had seen the best players of all time competing for the title. After the US Open switched to clay and then hard court in the 1970s, and after the Australian Open switched to hard courts in 1988, Wimbledon remained the only Grand Slam tournament to be played on grass, a surface that is usually more suitable for serve and volley players. Not only did Wimbledon keep its surface, but it also maintained old-fashioned traditions such as the white dress code.

In 2001, Ivanisevic, three-times a runner-up at Wimbledon in the 1990s, entered the Championship draw thanks to a wild card. With his current ranking of No 125 (No 121 at the cut), he was supposed to play qualifying but due to his former deeds at the All England Club, the committee had decided to award him with an invitation. No one ever used that opportunity better than him.

Between Ivanisevic and his dream stood Patrick Rafter. The Australian, world No 10, had been expected to triumph at Wimbledon one day. One of the last players to consistently play serve and volley, his game perfectly matched the grass courts, and the previous year, he had been defeated only in the final by Pete Sampras. This time, Rafter took his revenge from the 1999 semi-final, beating Agassi to reach the final at Wimbledon again.

Due to numerous rain delays during the tournament, the final was played on a Monday. New tickets had been sold, and as the stands were full of Croat and Australian spectators, the match started in front of an excited crowd. Maybe distracted by the enthusiasm of his fellow Aussies, Rafter lost his serve at the very start of the match, which cost him the first set, taken by Ivanisevic, 6-3. In the second set, the Croat struggled with his serve, which was his biggest weapon, and complained about shoulder pain. Rafter evened the score, 6-3.

Goran took the third set, breaking his opponent’s serve at 3-2 thanks to two amazing returns. The Croat had never been so close to his lifetime dream. Starting to feel the pressure, he had his first emotional outburst of the match after he double-faulted on a break point. Kicking the net, throwing his racquet away and swearing at the umpire, it looked like the good old Goran was back, consumed by his usual demons. There was too much at stake for him to get totally overwhelmed by anger, though. After losing the fourth set, 6-2, Ivanisevic gathered himself together in the final set, which did not surprise Pat Rafter: “It was too big an occasion for him to let that sort of thing worry him and get him down”.

In the fifth set, the atmosphere could be cut with a knife. At 7-7, thanks to a return winner, Ivanisevic broke Rafter’s serve. He waved his fist at his box while walking to his chair. For the first time in four Wimbledon finals, he was about to serve for the match, and his serve was maybe the most lethal in the world. And yet, this same serve, which had produced 211 aces already since the start of the tournament, almost let him down, in that last game. At 15-15, he made a first double fault. At 15-30, he fired an ace, sparking chalk all over the place on his second serve. Another ace followed at 30-30. Ivanisevic was now one point (one ace?) away from sealing the most unbelievable Wimbledon triumph of all time. He went into position with teary eyes. Double fault. A service winner gave him a second championship point. Double fault again. A missed passing shot from Rafter treated Ivanisevic with a third match point. Kneeling on the ground, praying to the skies, and eventually shaking his arm loose, the Croat tried to settle down before this new attempt. This time, despite a perfect approach to net, a magnificent lob from Rafter evened the score again. One service winner later, Ivanisevic obtained a fourth opportunity to make his lifetime dream finally come true. He missed the first serve, but he did not double fault this time. Rafter hit his return straight into the net. Ivanisevic let himself fall on the grass. After three losses in the final, he had come back from nowhere to triumph at Wimbledon, a feat no one believed he could achieve. In a final act of sportsmanship, Rafter gave a hug to a weeping Goran before the new Wimbledon champion climbed into the stands to celebrate his victory with his father and team.

“I don’t know if someone is going to wake me up and tell me I haven’t won again,” said an emotional Ivanisevic afterwards. “This was my dream all my life. I came here and nobody thought about me, but here I am holding the trophy.”
Rafter, after praising his opponent’s performance, shared his bitterness with the press. “I’m sick of making bloody history. (…) Someone has to lose and I’m the loser once again.”
The 2001 Wimbledon final was the last remarkable performance of both Rafter and Ivanisevic. Both had been struggling with shoulder injuries for a while already. Rafter’s last appearance would be the Davis Cup final at the end of 2001 while Ivanisevic would almost disappear from theTour in 2002, playing only 16 matches in the next two years. In 2004, after a farewell appearance at Wimbledon, where he would reach the fourth round (defeated by Lleyton Hewitt, 6-2, 6-4, 6-3), Ivanisevic would put an end to his career. 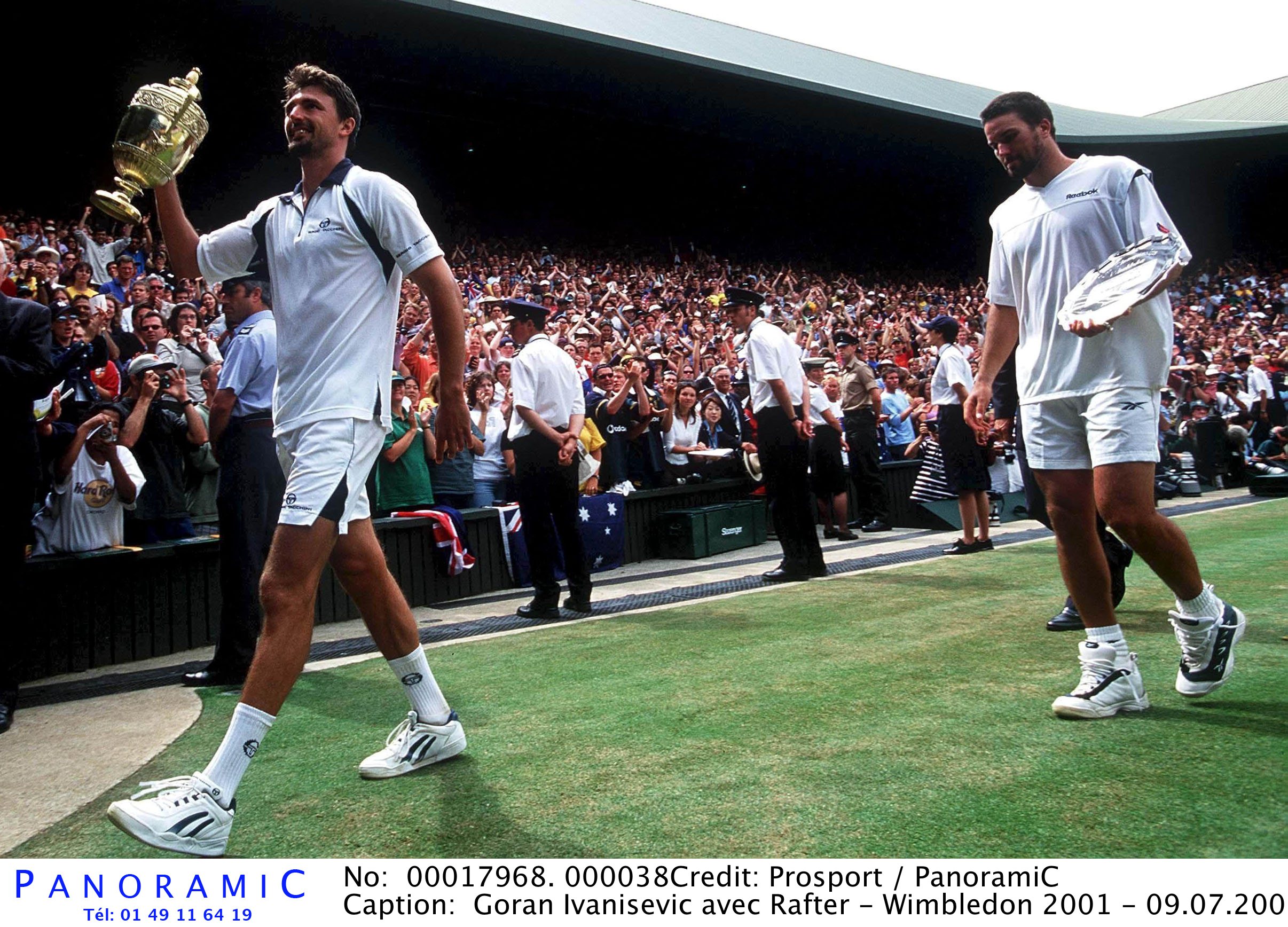