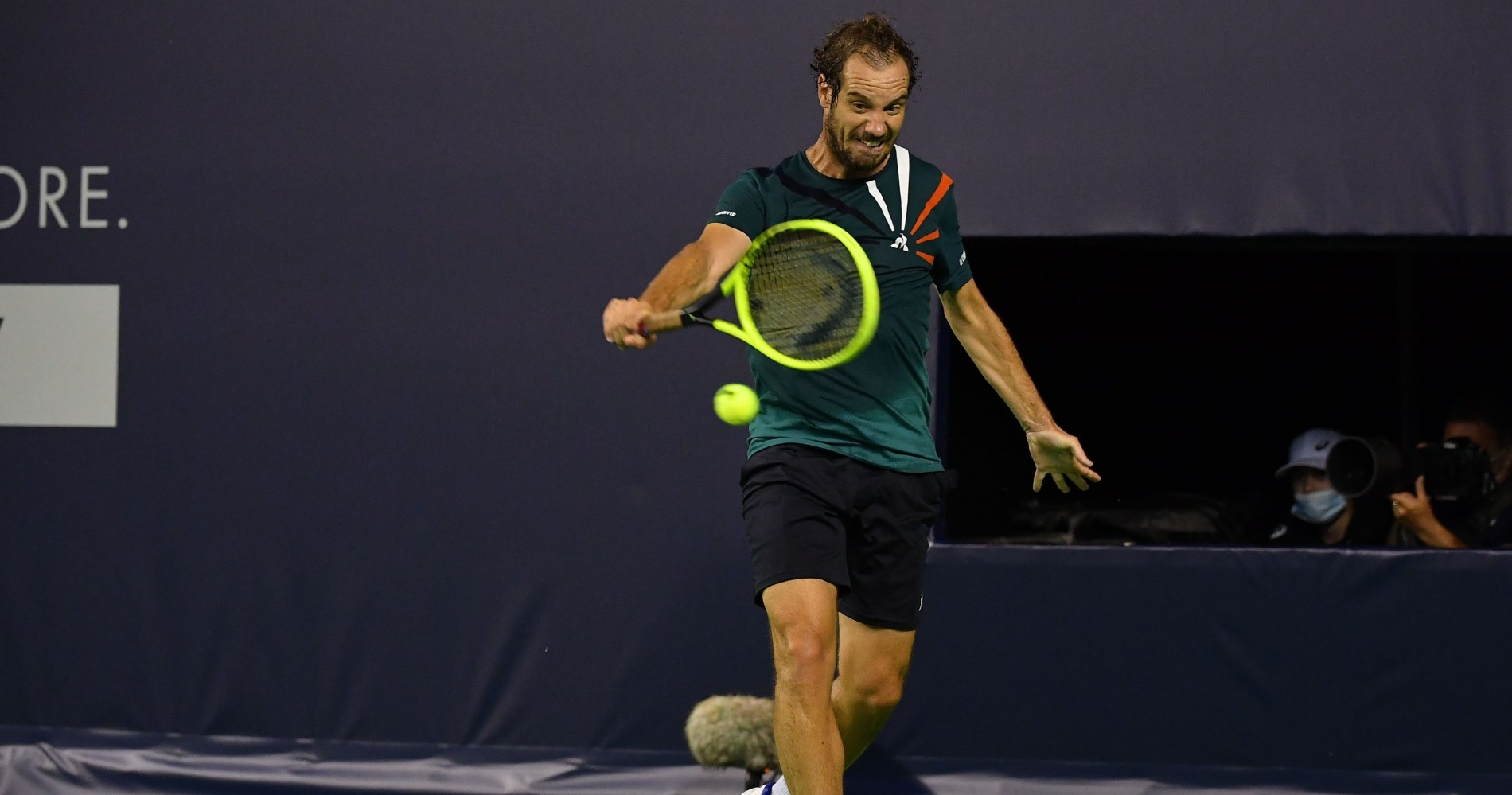 Thanks for following live matches from the Day 4 day session with us. Tennis Majors comes back at 9:00pm CET for the night session, with the most anticipated contest of UTS: Dominic Thiem versus Stefanos Tsitsipas.

Match 3: Dustin Brown “The Artist” vs Richard Gasquet “The Virtuoso”

Second straight victory for Richard Gasquet, as impressive against The Artist as he was the previous day versus Thiem. With a 3-1 record, The Virtuoso climbs to the second place of UTS rankings. Dustin Brown is dead last with four losses in four matches. 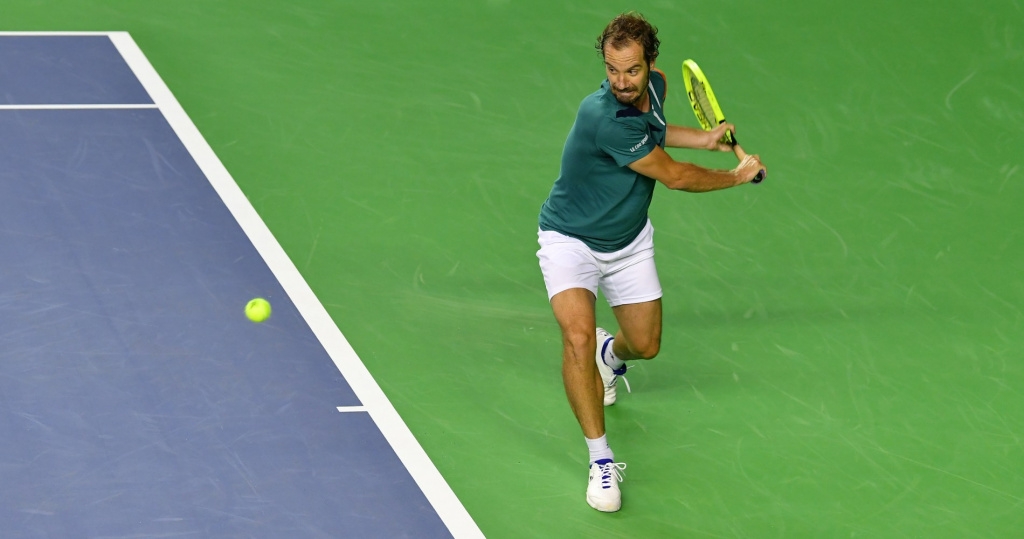 18-10 GASQUET – A finish without drama in this match, as Brown had long given up any hope to grab a quarter this afternoon. What an incredible performance from Gasquet!

17-7 GASQUET – The Artist tries to stay in it and Gasquet does a little more unforced errors. But The Virtuoso has a firm hand on this fourth quarter.

12-3 GASQUET – Winners keep coming for Gasquet, as his backhand is as accurate as a Swiss watch. Impressive.

8-2 GASQUET – Six consecutive points for The Virtuoso as Brown keeps his head down. It’s really tough for the German…

3-2 GASQUET – Unlike yesterday, Gasquet keeps the foot on the pedal in the fourth quarter and continues his marvellous display.

18-13 GASQUET – The Virtuoso secures a second straight victory with an end of quarter very well played.

12-10 GASQUET – Fantastic tennis from The Artist.

10-6 GASQUET – The “winners count 3” UTS card is paying handsome dividends for Gasquet. The Virtuoso turns the quarter around thanks to a backhand winner after a Brown drop shot and a stunner of a forehand. 6 points in 2.

6-4 BROWN – Brow has found back his serve and is fighting back!

2-1 BROWN – The beauty of this format is that it is not won for Gasquet already. But we hardly see how Brown could come back.

20-5 GASQUET – Absolute drop shot screamer from Gasquet on the last point of the quarter.

6-2 GASQUET – Gasquet is putting on a show. He is just everywhere.

5-1 GASQUET – Third ace from the Frenchman.

2-0 GASQUET – Gasquet starts with two aces. He has been serving unbelievably well over the weekend.

GASQUET TAKES THE OPENER, 23-10 – What a start from The Virtuoso. He continues where he left off with last night.

19-6 GASQUET – The world No 50 is just running away with this first quarter. He is very consistent from the baseline just as in his previous matches.

13-5 GASQUET – Great level of tennis from The Virtuoso.

9-5 GASQUET – The Artist takes his “winners count x3” UTS card but it is too good from Gasquet on the return of serve.

6-4 GASQUET – Gasquet takes an early lead with some luck.

The last match of the day is Dustin Brown vs Richard Gasquet. They already faced once: in the semi-finals of Montpellier in 2016. Brown led 6-1 3-0 and then lost in three-set.

Match 2: Benoît Paire “The Rebel” vs Matteo Berrettini “The Hammer”

The Hammer Berrettini bounces back. After losing 4 quarter to 0, he reverses the tables and defeats Paire on the same score. Tough loss for the Frenchman 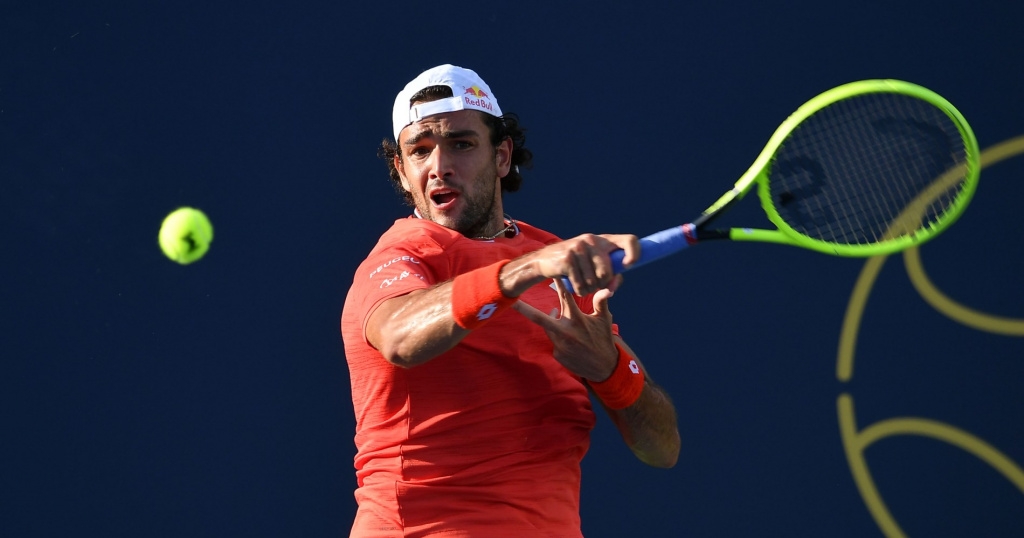 11-6 BERRETTINI – Horrible overhead miss from Paire after a brilliant play.

10-5 BERRETTINI – The Italian is edging towards the second 4-0 win of the day.

7-1 BERRETTINI – The rebel has giving up rebelling it seems.

“I don’t want to speak now. The only thing I want is put my head in an ice bath.”, Paire says to the commentators.

BERRETTINI STEALS QUARTER 3!! The Hammer produces a great turnaround and wins the match.

13-12 BERRETTINI – The Italian edges ahead. Incredible. Paire has been in complete control over the quarter. The Rebel still has still a serve to come back.

11-8 PAIRE – Berrettini is fighting back. Just too hot to handle from the Hammer

11-5 PAIRE – Paire wins four points in a row on his serve thanks to the “Steal serve” card.

7-5 PAIRE – Excellent fightback from the world No 8. “Bravo Matteo”, admits Paire on a drop shot winner by the Italian.

7-2 PAIRE – Magnificent backhand winner from the world No 22 Paire.

5-1 PAIRE – Paire starts this quarter much better. He takes an early lead.

Point of the day so far? Absolute stunner by @benoitpaire and Matteo Berrettini. The Hammer leads 2-0.#UTShowdown pic.twitter.com/d7qDQtPjTT

BERRETTINI PREVAILS IN QUARTER 2, 14-12 – Paire had the opportunity to come back to 13 points apiece but Berrettini smashes a great passing shot and now leads two quarters to love.

13-11 BERRETTINI – Great fightback from the Frenchman. Berrettini will have to serve for a last point.

This is one of those days for @benoitpaire… 😬

Ask your French-speaking friends for the translation, we promise it's worth it 🤣#UTShowdown pic.twitter.com/lUGy9aEO83

10-7 BERRETTINI – The Italian hit the line a couple of time and Paire loses it. He keeps shouting in French and throwing his racquet.

7-5 PAIRE – The Rebel uses his “winners count 3” UTS card and serves and volleys on both occasion. Berrettini voluntarily misses both returns.

5-4 PAIRE – Paire edges ahead thanks to his backhand.

2-0 BERRETTINI – Paire is not patient enough and hits a couple of unforced errors.

Classic entertainment by @benoitpaire and Berrettini 📹

14-6 BERRETTINI – The world No 8 is more solid and is extending his lead.

9-5 BERRETTINI – Berrettini proves more patient than Paire during the rallies.

6-4 BERRETTINI – Paire is playing aggressive tennis and coming to the net to come back to 6-4.

3-1 BERRETTINI – The Berrettini forehand is making some damage already.

The Frenchman prevails 4 quarters to love. He had the answer to everything this afternoon. Popyrin has not won a single quarter this weekend. 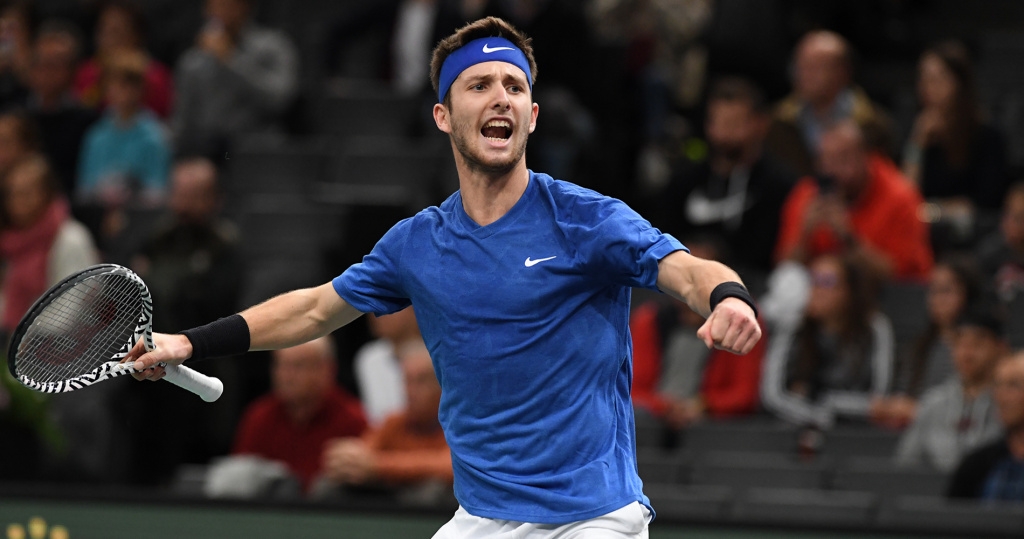 13-11 MOUTET – The Australian wins 4 points in a row by stealing serve appropriately and coming up with big forehand winners.

9-3 MOUTET – Moutet successes in everything he does. He livers an exquisite volley in full stretch at the net. Popyrin can’t believe it.

2-0 MOUTET – Corentin Moutet wins the point by serving and volleying.

The fourth quarter is still played for set-average purpose. Can Moutet go for the third 4-0 win of the weekend?

The Tornado takes Day 4 by storm 🌪️@moutet99 earns his first #UTShowdown win. Meanwhile, The Sniper is on a 7-quarter losing streak 😵#UTShowdown pic.twitter.com/uj1NyCA2Pt

16-13 MOUTET – Popyrin wins 3 points in a row and steals serve. But he can’t win a fourth and that mean the wins is going to go for Moutet.

15-10 MOUTET – Moutet gets the 3-pointer with an outstanding forehand passing shot. Incredible from the Frenchman.

12-9 MOUTET – The world No 103 gets frustrated as Moutet has a response to everything.

8-6 MOUTET – The world No 75 produces a turnaround once again.

4-2 POPYRIN – Moutet went for the slam dunk but fails it didn’t quite come off.

MOUTET TAKES THE 2nd QUARTER, 14-12 – The Frenchman leads by two quarters to love.

13-11 MOUTET – Moutet wins a couple of point on his serve and now is stealing serve at the very best moment.

10-9 MOUTET – Poor body language by Popyrin. The Aussie is unhappy with his game and the referring.

6-6 – The Frenchman plays with patience and he is back to deuce.

6-4 MOUTET – The tornado playing chicky with an underarm serve when using his “winners x3” UTS card. He can’t make a winner but he wins the point.

Sneaky sneaky 👀@moutet99 comes up with a new strategy on the winners count 3 card.

6-1 POPYRIN – Momentums can shift rapidly in this format.

4-0 POPYRIN – The Sniper in action. Massive first serve and the coming up with a huge inside out forehand.

MOUTET WINS QUARTER 1 BY 14 POINTS TO 8 – Great start from the Frenchman.

12-8 MOUTET – A couple of Popyrin unforced errors at the worst moment from Popyrin.

8-6 MOUTET – The Australian does not get a winner when using his “winners count 3” card. He can’t make a winner but wins both points which is a fair deal. 3 minutes to go.

4-4 – Solid stuff from Popyrin to levels up the score.

4-1 MOUTET – Great start from Moutet who wins four points in a row.

1-0 POPYRIN – Here we go for the first match of UTS Day 4. Alexei Popyrin wins the first point with a big serve, his biggest weapon.