The final match of a drama-packed second day of Ultimate Tennis Showdown produced an absolute thriller, as The Greek God, Stefanos Tsitsipas, edged out The Virtuoso Richard Gasquet after sudden-death. 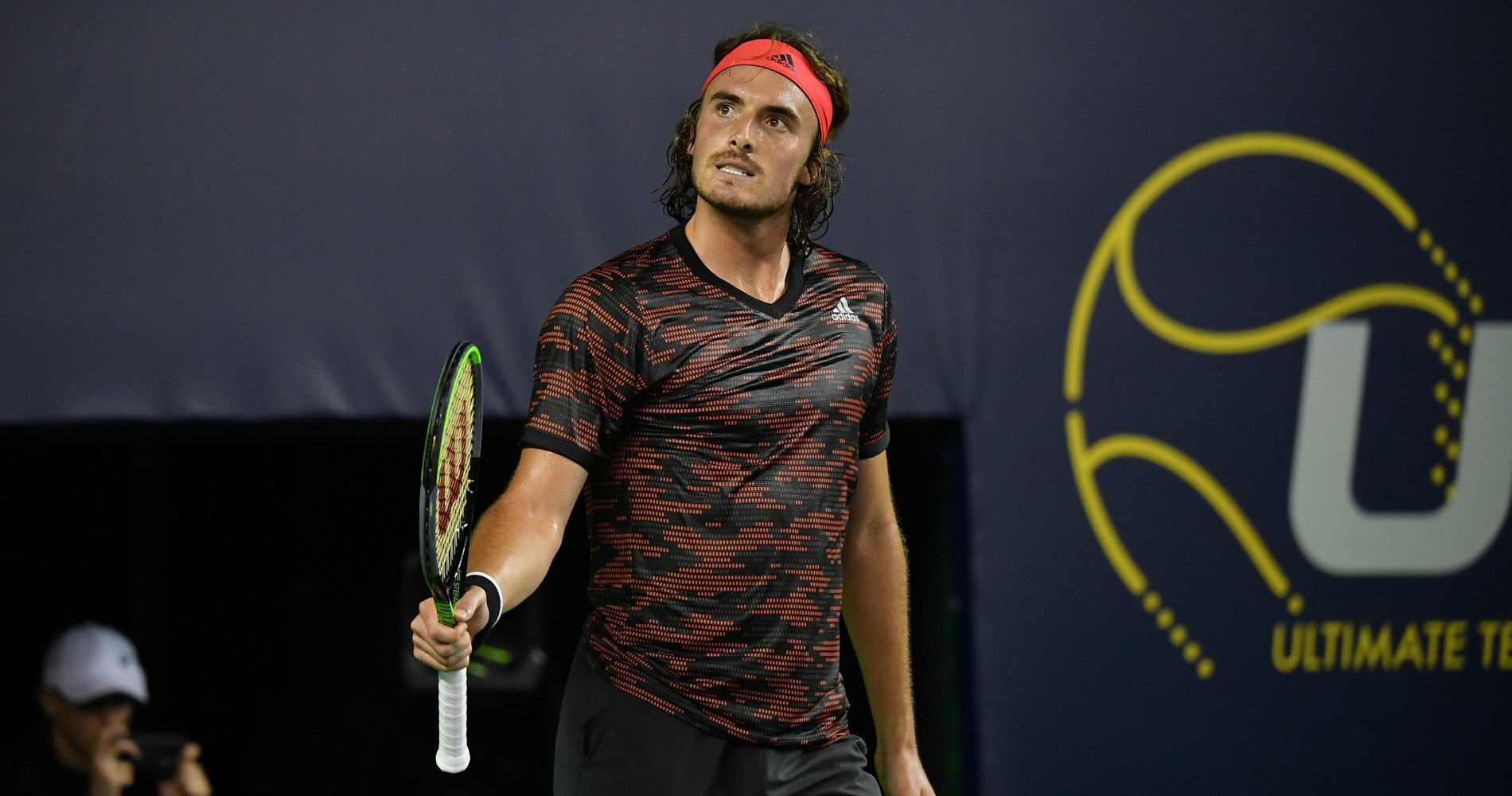 Both players had won their opening matches coming into the eagerly anticipated encounter, and after Gasquet won the fourth quarter to take it into a decider, it was Tsitsipas who took the match on his fourth match point, winning 17-12, 14-15, 15-12, 13-15 and then 5-3 in sudden death.

The Greek god comes through in sudden death! 💪@StefTsitsipas saves 3 match points against @richardgasquet1 and remains undefeated at #UTShowdown pic.twitter.com/Tq01IkMg3E

It was a tactical match from the outset. A very early timeout from the Tsitsipas coaching corner – each player is allowed four per match – was an interesting call, with father urging son to get up into the court and step into his shots.

Gasquet had triumphed in a sudden death thriller against David Goffin on Sunday, and the Frenchman established an early lead in this most exciting and unique of formats, which allows players to use UTS cards, picked ahead of the match, to their advantage, when they require.

The Virtuoso was first to try, with a ‘winners count x3’, but lost both points when ahead early in the opening 10-minute quarter. Next came Tsitsipas, his ‘winner x3’ card paying handsome dividends, as a clean forehand into the corner notched three points en route to a comprehensive 17-12 opening quarter.

“I don’t really know what happened, but I made some good decisions there,” said Tsitsipas after his sluggish start. “If I remember, I was two points back and he was serving, so it was important when I won those two points on his service points and got back on the score and gained a little confidence knowing that he wasted his two cards and didn’t use them wisely.”

Gasquet times it to perfection to draw level

Tsitsipas had won his opening match 3-1 against Benoit Paire and now had momentum on his side, The Greek God blasting successive aces to edge ahead. But the flashing backhand blade of Gasquet is one of the great joys of tennis, and a running winner up the line was even applauded by Tsitsipas himself.

As with the opening 10-minute quarter, it was Gasquet who took the early lead, 7-5. But in a format where momentum can turn in an instant, there was little to separate the pair and with little over three minutes remaining, Gasquet narrowly missed his trademark backhand for a x3 winner before finding his mark on the very next point to lead 11-9.

Decision-making and using cards at the right time are a key element of UTS, as well as awareness of the clock. And when Tsitsipas fired down a x3 ace winner of his own, Gasquet led the second quarter 14-12 with only a minute remaining. But with two serves left, The Greek God levelled before Gasquet just had time to hit an unreturnable serve to edge it by a point, 15-14.

“I had to give my best, if not it was 2-0 and it would be tough to come back, so I tried to fight a lot and I won the three points and I start the last point well and I won but it was a tough one,” said Gasquet at the change of ends. 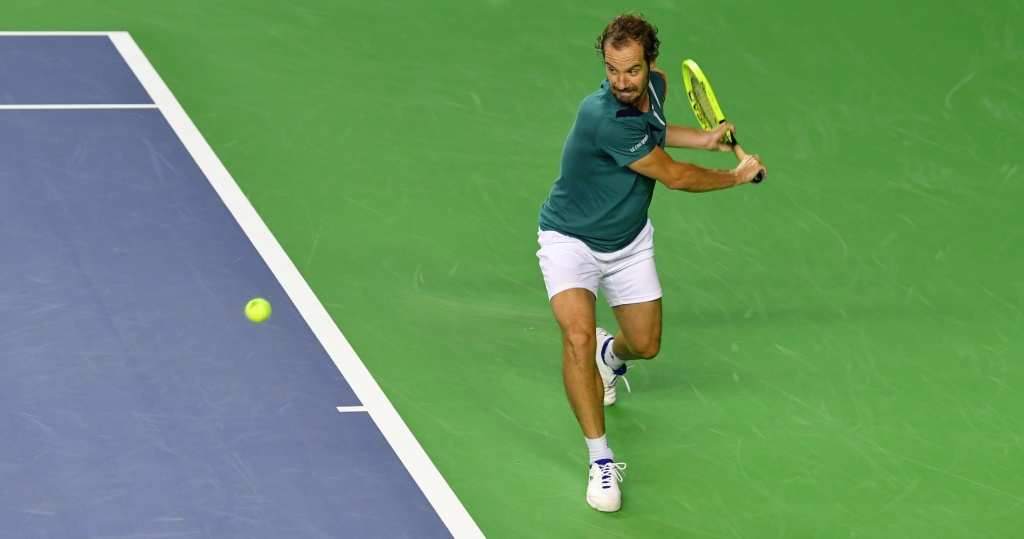 After the exertions required to grab the second quarter, Gasquet seemed the more fatigued early in the third. But another important element of UTS is that the four-quarter format means a player is always in the hunt unless he loses the opening three – a sudden-death decider being the result of a 2-2 draw.

At 6-6, The Virtuoso deployed his ‘winner x3’ card, and it paid off, the Frenchman finding an inspired second serve ace to lead 9-7. The Greek God was next to strike, following one card after another, garnering four points on the trot to wrest the initiative.

It would be another quarter to go to the wire, all the positives of this brand of ‘speed tennis’ coming to the fore, but it was Tsitsipas who had points in the bank when the clock wound down to zero.

“That pissed me off,” said Tsitsipas of Gasquet’s second serve x3 ace winner. “I need to be angry sometimes. He is known to be a good player who covers the court really well, his defensive game is really good so that’s what actually makes Gasquet who he is.”

"That pissed me off," says @StefTsitsipas, when asked about his reaction to Gasquet's three-point ace.

A fitting finale to an early classic UTS encounter

Into the final quarter and with Tsitsipas finding himself 6-2 behind, The Greek God deployed the first of his cards with ‘steal serve’. But sometimes, UTS cards do not work to a player’s advantage and Gasquet won both points against serve to establish a stranglehold. It triggered another Tsitsipas coaching timeout, the advice being to have more aggression.

The tip seemed to work, Tsitsipas utilising his winner x3 card before finding a clean backhand up the line to reduce the arrears. All cards expended, Gasquet found himself 12-9 up with two minutes remaining, and the quarter looked over. Despite a little wobble, a 15-13 win meant it would be another sudden-death decider, with the first to win two consecutive points taking the match.

After the opening point, every point is a match point, and this was the most exciting of sudden deaths so far, both players having three of their own before a netted forehand gave Tsitsipas the win by the narrowest of margins.

Undefeated @StefTsitsipas has a few days to train at @MouratoglouAcad before his next matches. So what is he gonna work on 🤔