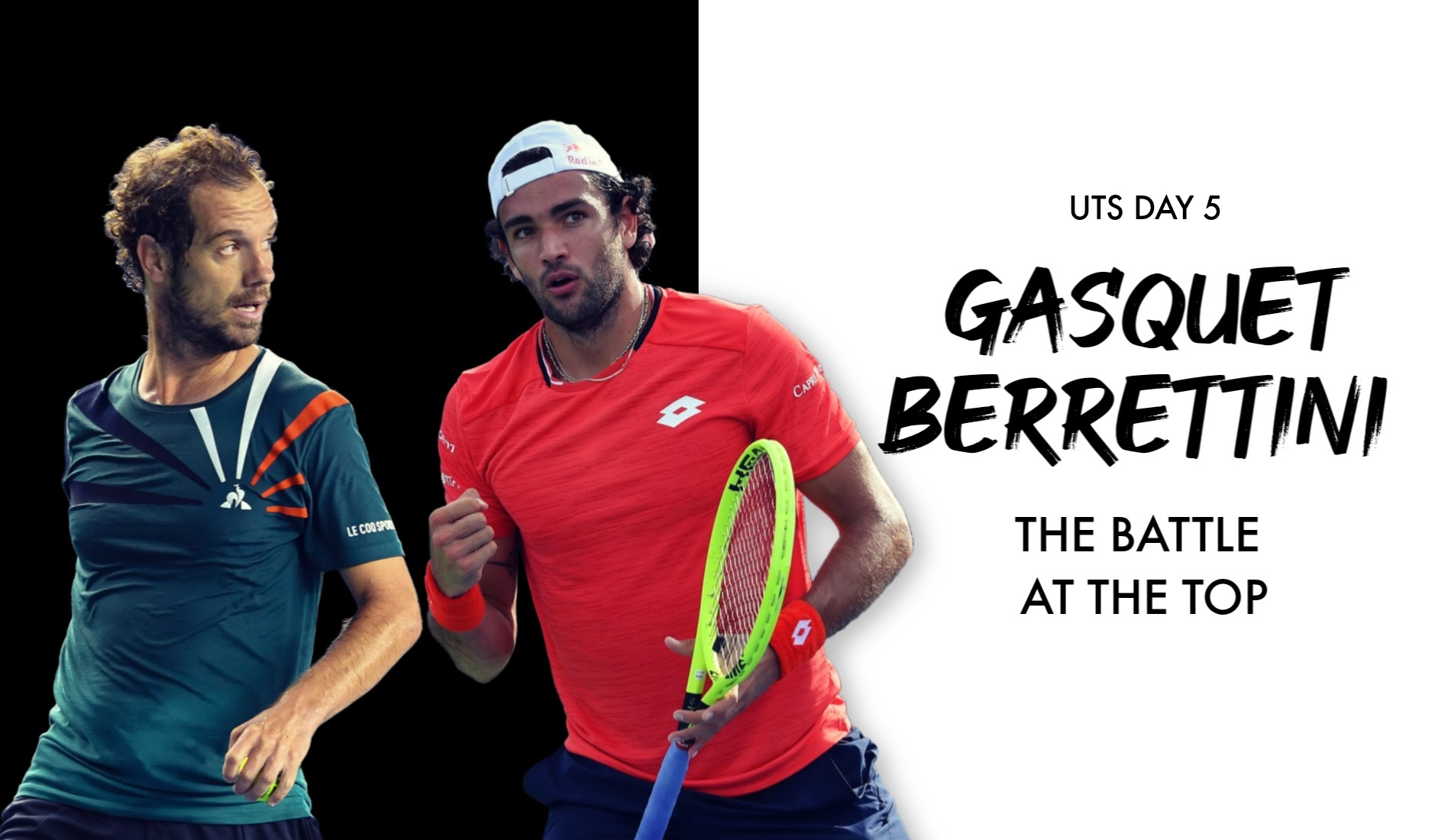 Welcome to another beautiful day in the south of France and we’re ready to go for the first match of the afternoon session:

Richard Gasquet “The Virtuoso” vs Matteo Berrettini “The Hammer”

Quarter 4
The Gasquet backhand makes an appearance as he thunders one down the line on his way to a 6-3 lead but Berrettini wins two points against the serve to level.
Berrettini slams an ace down on his winner x 3 card to go ahead 10-9 but Gasquet is still fighting and wins a long rally to go 12-10 up.
A brilliant drop volley and then an ace makes it 12-12 and at 13-13, with one minute to go, Berrettini had the advantage with serves to come. The two men got to 14-14 with just 25 seconds remaining, but Berrettini had the steal serve card up his sleeve and he used it, going up 15-14 and then, with five seconds to go, winning a long point with a fine smash to complete a 4-0 win.

Quarter 3
Good hustle from Gasquet and then two big backhands give Gasquet an early lead.
The Virtuoso uses his winner x 3 card but wins only one of the two points, but then pinches a point on the Berrettini serve and wins two more on his own to go up 10-6 with two minutes to go.
The Hammer uses his winner x 3 card but can’t take advantage. Then he uses the steal serve and loses the first point, giving Gasquet some breathing room. The Drama! Italian cuts the deficit to 11-9 and Gasquet then misses two simple volleys to leave a deciding point with two seconds to go, before hammering a forehand return to snatch the quarter 12-11.

Quarter 2
Good stuff from both men at the start of the second quarter, Gasquet coming forward a bit more in the early stages.
Gasquet uses his winner x 3 card early but Berrettini slams a big return and goes ahead, a big backhand followed by a huge forehand, setting it all up with some outstanding serving.
At 7-11, Gasquet uses his steal serve card but wins only one of them and it’s a long way back from here, now, with a few minutes remaining.
And Berrettini puts the quarter to bed, using his winner x 3 card to good effect to go up 16-8, too big a lead to let go. Stealing the Gasquet serve at 18-10, he hamemred down a couple more big serves and that’s pretty much that.

Quarter 1
Fast start from Berrettini, putting the hammer down early to lead 3-1 with some massive hitting. Great depth from both players.
Gasquet’s the first to use a card, stealing the serve but it doesn’t help, losing both points to go in front. Berrettini then uses his winner x 3 card but loses both, just falling short with a drop shot.
The Virtuoso uses his winner x 3 card but wins both points in normal fashion, before Berrettini hits straight back, then uses his steal serve card. Goes up 12-11 before Gasquet levels with an ace. There’s still time for one more point, though, and it’s the Italian who wins it with a big first serve.

Alexei Popyrin “The Sniper” vs Benoît Paire “The Rebel”

Quarter 4
Paire has treatment to his right shoulder before the start of the final quarter, then almost hurts his leg early on.
The Frenchman’s beginning to look a bit despondent now, and Popyrin charges in front, 10-6. The Aussie uses his steal serve card and goes ahead 11-7.
A great drop shot from Paire helps him cut the gap to 12-10 but two fine serves put him further in front.
Benoit! He’s not out of it yet, playing a brilliant drop shot for a winner and gets within a point at 17-16, with a serve to come. But Popyrin comes up with a great backhand pass to win it 18-16 and complete the whitewash.

Quarter 3
Paire plays his best point of the match, a superb forehand getting him back on track after trailing 3-1 early on.
Paire, who said after the second quarter that his shoulder was hurting a little, is getting annoyed with himself but hangs in there.
It’s all going Popyrin’s way as he takes his steal serve card and wins both points, one with a net cord, leaving Paire to throw his racquet in disgust.
Now Popyrin’s running away with the quarter, two double faults from Paire, having been given the -1 serve, gives the Aussie a big lead.
Paire uses his winner x 3 card but it’s too late and the Sniper runs out an impressive winner.

Quarter 2
Popyrin quickly goes up 2-0 but Paire gets back on track with a nice forehand. Stroke of luck for Paire as Popyrin thinks a return is long, and Paire puts away the forehand to lead 5-3. But a double-fault and wild backhand and it’s back level. Popyrin loses his rhythm, though, double-faulting twice, before Paire wins a x3 point to go ahead 11-6.
The Sniper then roars back, a backhand volley reducing the deficit to 11-9 and then, after stealing serve, he wins both points and then uses his -1 serve card brilliantly, drawing two effective doubles from Paire.
Paire hangs in with an ace to get back to 13-15 but Popyrin shuts the door, finishing off with a second-serve ace to make it 17-13 and go up two love.
“I think I used my cards pretty well,” Popyrin said.

Quarter 1
We’re underway with Popyrin starting things off. Fast start from the Australian but Paire gets on the board when he sends a return long.
The Frenchman finds his range on serve with an ace to level at 4-4 but a double fault costs him and Popyrin pulls him ahead 9-5.
The Popyrin forehand is continuing to do some damage but Paire, whose beard seems to have doubled in length, is hanging in there. Paire calls a coaching timeout with 2.50 to go and discusses when to use his UTS cards.
The Rebel takes his x 3 card but wins the first point and then double faults on the second. Then Popyrin uses his -1 serve and Paire doesn’t realise he had only one serve, double-faulting as Popyrin pulled away to take the quarter with ease. First blood to the Sniper.

Quarter 4
Moutet can do no wrong today, standing his ground and reflex volleying a backhand for a winner on his way to a 6-2 lead.
Brown tries his winner x 3 card at 9-3 down but can only pick up two points and Moutet pulls away again.
Moutet showing he can do almost anything, running round his forehand to hit slice backhands, while Brown, frustrated with something, has a few words with the umpire. It’s not helping.
Nothing Brown can do as the Tornado blows away Brown, finishing the quarter to win it 18-8 and seal a comprehensive, brilliant 4-0 win.

Quarter 3:
This time it’s Moutet who starts the faster, an inside-out forehand giving him a 3-1 lead. Looking tough for Brown right now.
Stunning play from both men! Trick shot after trick shot from both men ends with Moutet slicing a backhand for a winner, then he rips a backhand for another one on the next point and it’s all Moutet right now.
Brown tries his winner x 3 card at 9-5 down, wins both points but frustrated he couldn’t get a winner.
This is turning into a show from Moutet as he plays a deft drop volley, followed by a sumptuous backhand lob to lead 11-8.
What a performance from Corentin Moutet! The Frenchman wins back to back x3 points to go up 17-11 and then, after stealing serve, plays a behind the back underarm serve, clinching the quarter 20-10 to take an unassailable lead. “To be honest, I didn’t even see it,” Brown said. “I was looking to see how much time was left and then I saw the ball, but it was too good.”

Quarter 2:
Nip and tuck at the start of the second quarter as Brown leads 2-0 only to be pegged back. The German thunders a backhand for a winner but it’s 6-6 as he makes another mistake.
There’s the Artist at his best – beautiful drop shot from Brown gives him an 8-7 lead but he can’t get away from Moutet and the Frenchman moves ahead again 10-8.
What a chance for Moutet. Uses his winner x 3 card at 10-8, wins the first one as Brown just gets a racket on a big forehand but then misses a sitter of a volley to make it 11-9!
But Brown can’t take advantage, Moutet cleverly using his steal serve card to extend his lead and Brown has no time to get back into it as Moutet goes up two quarters to love.

Quarter 1:
Quick start from Dustin Brown thanks to a couple of hefty forehands as he leads 4-1. An angry Moutet slams the ball out of court at 4-4 after missing a Brown drop shot but we’re back on serve. Both men have taken the UTS cards of winner x 3 and steal serve.
The two men stay on serve to 6-6 but Brown makes a mess of his winner x 3 card, losing both points and suddenly Moutet strings four points together to lead 11-7. Brown gives himself a chance with three points in a row to cut the gap to 11-10 but Moutet wins his x 3 card at 13-10 to move clear and extends the lead to 18-10 to strike first with the opening quarter win.
“That was good, pretty good. I am a little tired, from the wind. I was practising like an animal in the wind,” Moutet said.