UTS Sudden Death: Is it better to be lucky, good or simply crazy?

UTS sudden death is a wild ride and only the strong survive. So how do top tennis players deal with the overwhelming pressure and find ways to win? 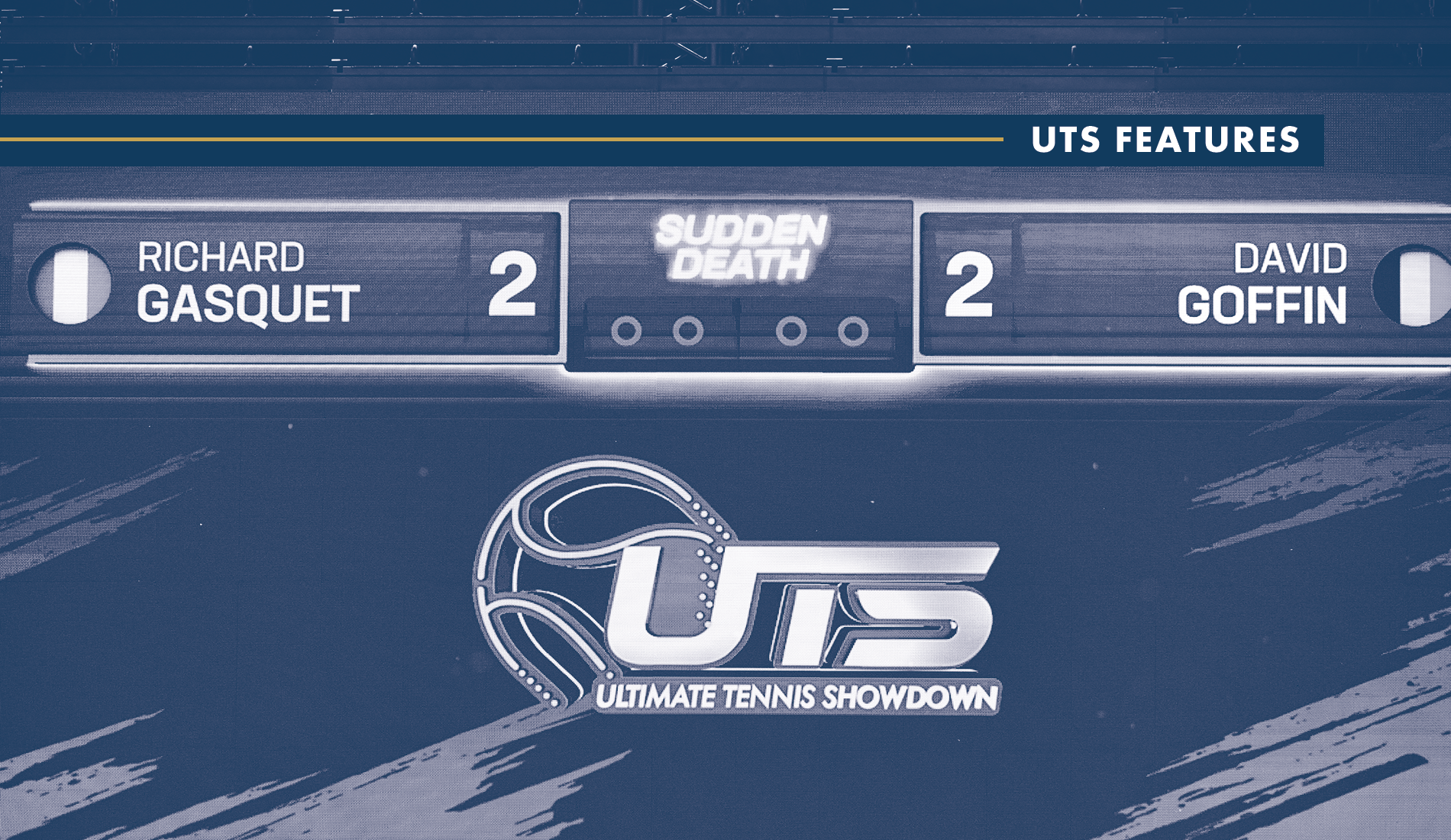 Tennis is a sport built around tension and drama, and UTS has taken this concept to an entirely more hair-raising level by introducing a sudden death format that makes the generic tiebreaker look like child’s play.

At Ultimate Tennis Showdown, sudden death is like playing tennis on a highwire 500 meters high, stretched between two monolithic buildings as a stiff breeze blows. One moment of indecision and you’re dead.

First, a look at the rules. The player who has won the most points during the four quarters serves first. Servers can serve from the deuce or the ad-side – their choice. After the first point, every point that follows is a match point.

Next, the leap of faith. A player must jettison his doubt and forget about the risk calculus that can pay dividends over a longer format. Here at UTS things are fast and furious. Blink and you miss it, think and you lose.

Now this is how you convert a match point! 🤯@DreddyTennis with the MIRACLE dive and… the WIN! #UTShowdown pic.twitter.com/N5nTJbVKYO

The best players, like Greece’s Stefanos Tsitsipas, know that it is useless to overthink things. Tsitsipas was a master of sudden death at UTS, winning on his first four attempts and even saving three match points against Richard Gasquet in the longest sudden death encounter to date at UTS.

“I wish I had an explanation,” he said of his success. “I have nothing to explain. I don’t know, I have no idea, the gods were with me.”

The will over the tools

Tsitsipas may have stumbled upon the secret unwittingly. You just have to believe in yourself. See ball, hit ball.

When two players are tied at two quarters apiece they each take a minute to discuss the match with the commentators – it’s part of the UTS show. For the players it may be challenging to handle the double responsibility of entertaining a television audience and preparing to jump out of a plane without a parachute, but they do it quite well.

And these conversations give us insight into the minds of the players. Often it is the player who is focused more on the spiritual than the tactical that ends up celebrating victory. Concepts like belief and calm may seem like rudderless clichés but when thinking about all the things that could go wrong is the alternative, perhaps it is better just to keep it simple.

“Believe in yourself. Just have to boost myself up and come in with confidence. Really nothing to lose. Just enjoy the game, smile and enjoy every moment. I’m just going to concentrate on how much I love this night and forget about the rest,” Tsitsipas said before he edged Matteo Berrettini on Day 10 of UTS1, capping yet another comeback from two quarters down.

When it comes to the spirit, the Greek has plenty. Score one for the power of positive thinking.

But Tsitsipas isn’t all flowery language and fever dreams. The Greek knows that you have to be tough to deal with the pressure of sudden death tennis. The format never lets you breathe, or gather your thoughts. World class players have all the tools to survive, but they also need the will.

“Just play aggressive, you know, stay there and be the one to survive,” Tsitsipas added.

The importance of self-belief

It helps to have courage as well. Take Corentin Moutet, for instance. The 21-year-old wasn’t an original cast member at UTS, but when he showed up he immediately played the part and acted like he belonged. He ended up as one of seven players to earn more than one win in sudden death and his approach was guided by his daredevil mentality.

Possibly the acrobatic Frenchman was engaging in mental gymnastics, something to take his mind off the pressure that was closing in around him, as well.

“What are you going to do in this sudden death?” commentator Pete Odgers asked him after he had tied with Holger Rune, two quarters apiece, on the final weekend of  UTS1.

“What are you gonna do in this sudden death?” 🤔

“Win.” 😋@moutet99 keeps his word, saves TWO match points, and closes out his @UTShowdown with a dramatic victory. pic.twitter.com/aHa2W6p9CN

Then he looked into the camera and doubled down.

“Everybody who is listening, I’m gonna win this one, 110 percent.”

His opponent, the 17-year-old Holger Rune, took a more practical approach: “Everytime I can step into the court I will try to come in with my forehand and come to the net. If I can’t step into the court try to play high balls because he’s very good when you play fast to him.”

Fortune favored the bold in this case: Moutet saved two match points and won it, 3-2. 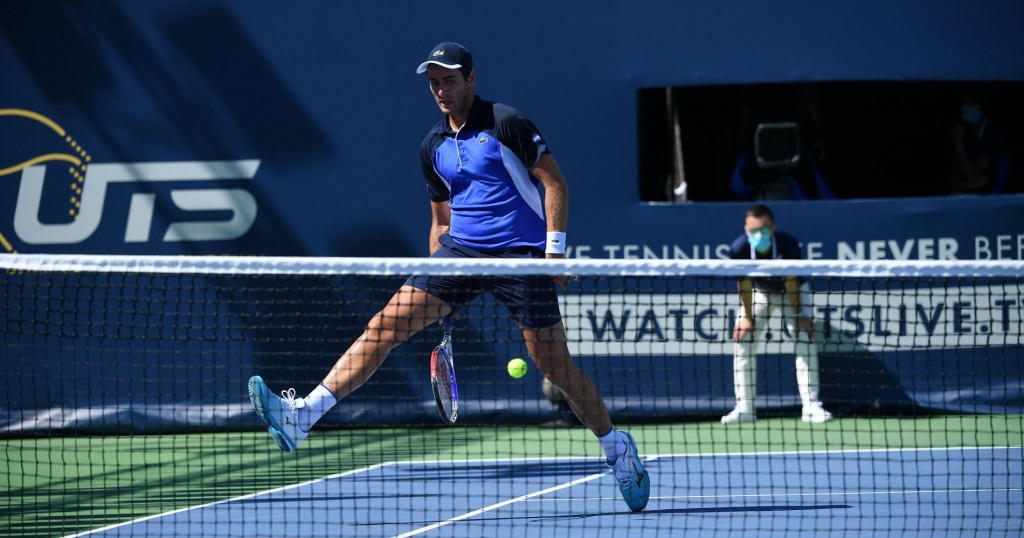 Another courageous one was France’s Elliot Benchetrit. He was one of the surprises of UTS1, and he never lost a sudden death match. Benchetrit defeated Lucas Pouille and Benoit Paire, and he did it by being bold.

What were his tactics? Odgers asked him about them during the changeover before he faced Benoit Paire.

“Only make winners,” he replied with a grin.

That’s basically what he did.

Of the 17 sudden death matches played so far at UTS, ten have been won by the player that served first. It’s not a guarantee but at least it helps. Win that first point on your serve and you are already at match point.

“I have to be focused. I have to think about my serve,” UTS1 champion Matteo Berrettini said before he defeated Richard Gasquet in sudden death in the semi-finals.

It was the Italian’s first sudden death victory and he needed to save a match point to do it.

Later in the day he found himself in sudden death again against Tsitsipas, with the Greek serving first.

He saved two more match points and became the first champion in the South of France.