Anett Kontaveit recovered from losing the first set to convincingly defeat Lauren Davis on Monday in Cleveland. Kontaveit is joined in the second round by Daria Kasatkina and Caroline Garcia.

Cleveland’s own Lauren Davis could not have started much better in her hometown at the inaugural Tennis in the Land tournament. Unfortunately for Davis and the crowd, to say that he success was short-lived would be an understatement.

The 27-year-old American dominated the first set against second-seeded Anett Kontaveit but then did not win a single game the rest of the way as the Estonian prevailed by a bizarre 1-6, 6-0, 6-0 scoreline. Kontaveit needed just one hour and 32 minutes to advance even though the match required three sets.

Kasatkina, Garcia ease into second round

Carolina Garcia is also through, having made quick 6-1, 6-2 work of qualifier Catherine Harrison. 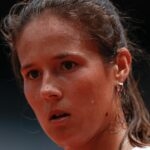