A slump-proof Medvedev? Russian mastering consistency as his rise continues in Marseille

After his first mind-bending hot streak, in 2019, Daniil Medvedev needed over 10 events to return to his top form. With his title in Marseille he’s proving to be more slump-proof than ever. 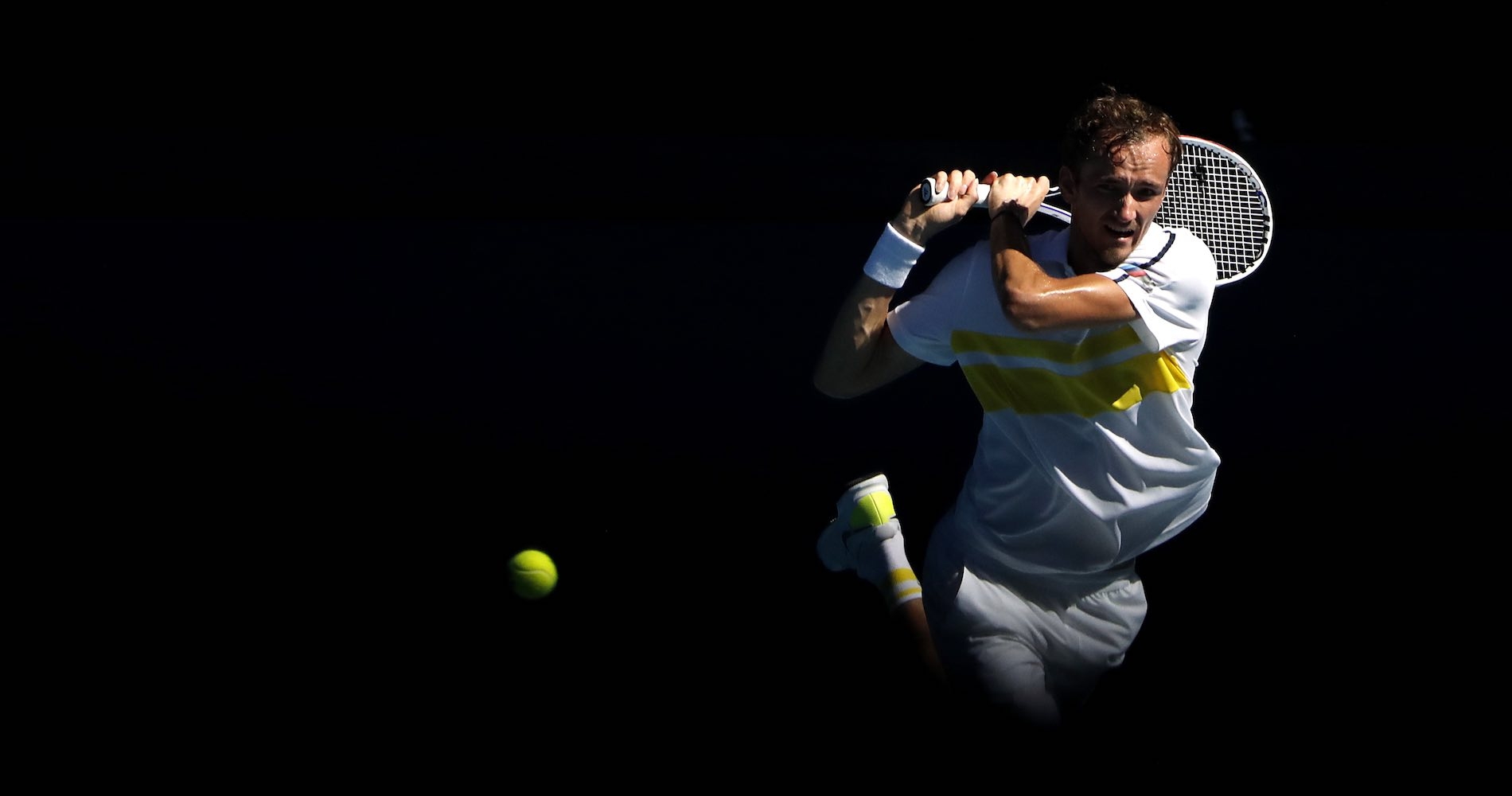 Perhaps we have seen Daniil Medvedev’s last prolonged title drought. The Russian, who famously reached six consecutive finals in 2019, the year he made his top 5 debut and reached his first major final at the US Open, went on to play 11 consecutive events without reaching another final after that.

He ended that less desirable streak last November, when he won the Paris Masters title in Bercy, and from there he became untouchable again, reeling off 20 consecutive victories that took him to this year’s Australian final and his loss against the impenetrable wall also known as Novak Djokovic.

Also Read: Daniil Medvedev back on song after “Crazy” year

No slump this time

After suffering a first-round loss in Rotterdam last week, we wondered if Medvedev would once again tail off and lose his level for months, maybe even a whole year? Apparently not. The 25-year-old claimed his tenth title today in Marseille and is giving indication that he’s learning to return to his top level more quickly, even after crushing defeats.

“First of all, really happy about No 10 because two digits and for sure I dreamt of it when I was a kid,” Medvedev said. “I think it’s already a great number but I’ll try to work more and get some more.”

This development in Medvedev’s progress could be the factor that propels the Russian machine even higher in the rankings – there is only one more spot left to tackle, and on Monday there will be only 2135 points between his current station and Djokovic’s. For now, he’s thrilled to become the first non Big 4 player to hold the No 2 ranking since Lleyton Hewitt in 2005.

“I am just happy that it happened. I worked all my life to be at this place, of course, also with the ranking squeeze it’s a bit tougher to feel it,” he said, “because you know we can always talk that I have my points from Cincinnati and US Open last year, or Shanghai, but Rafa got also some points, especially US Open win. I’m just really happy about getting this spot and then I’m going to go back to work, on the practice courts on Tuesday, and try to be better, and get more points next tournament.”

Let us first say: Medvedev didn’t play terribly after his streak of six consecutive finals ended in 2019 at Bercy, where he was defeated by Jeremy Chardy in three sets. And he had to, like the rest of the ATP, get used to playing in front of empty arenas as he travelled the globe during the pandemic. But he did seem to lack his usual killer instinct: the ability to fight and emerge victorious in close, hard-fought contests.

He lost all three of his matches at the ATP Finals, losing tiebreakers to Alexander Zverev and Stefanos Tsitsipas in straight-set defeats, then blew a match point and a 5-1 lead in the third set to fall to Rafael Nadal in his final match.

As 2020 started he played well at the ATP Cup, but could not defeat Djokovic. Then he reached the second week at the Australian Open, but lost in five to Stan Wawrinka. Early losses in Rotterdam (Pospisil) and Marseille (Simon) happened before the shutdown due to Coronavirus, and when tennis resumed there was a quarter-final at Cincinnati and a semi-final at the US Open – not bad.

But the frustration was mounting for Medvedev and his struggles got worse on clay last fall. He fell to Ugo Humbert in his first match at Hamburg, then was buried in four sets at Roland-Garros by Marton Fucsovics in the first round.

Even in St. Petersburg the Russian could not find his form yet. Reilly Opelka bounced him in three, and in Vienna it was a resurgent Kevin Anderson who zapped him in the quarter-finals.

But it all changed from there. Medvedev flicked the switch, and much like he did in 2019, simply refused to lose. A title in Paris, in which he brilliantly wrestled the final from Alexander Zverev, was followed by a stunning run at the ATP Finals where he became the first player in in history to defeat the Top 3 at the same Nitto ATP Finals, and just the fourth player to do it at any ATP event.

Medvedev’s momentum didn’t slip as 2021 started. He ripped through the ATP cup undefeated and raced to the final at the Australian Open, pushing his career-best winning streak to 20.

It took perfection from Novak Djokvoic to put him in his place in Melbourne, but when Medvedev struggled in Rotterdam and fell to Dusan Lajovic in his first match, it was natural to wonder if his next final appearance might be ten months in the making. After emptying so aften, would Medvedev be running on empty for the rest of the season?

He answered the question emphatically in Marseille.

And there lies yet another positive sign for Medvedev’s future, and for his chances of one day holding the ATP’s top ranking. By winning Marseille Medvedev proves to us that he is learning how to elevate his level on a more consistent basis. It has been less than a month since the Australian Open final and he’s already back in the winner’s circle, playing with full passion and energy.

“Talking about this week, first of all really happy about beating strong hard court players. Especially as I said you know the draw was not easy, I had to play Gerasimov, Sinner, Pierre-Hugues, Matthew [Ebden] made a good week to be there in semis, of course he couldn’t finish the match, so I got a bit lucky there. But I played really strong. Strong field, strong guys, to get this title. It was not given to me easy, today Pierre-Hugues gave it all on the court, I’m happy that I managed to go through all these tough matches.” 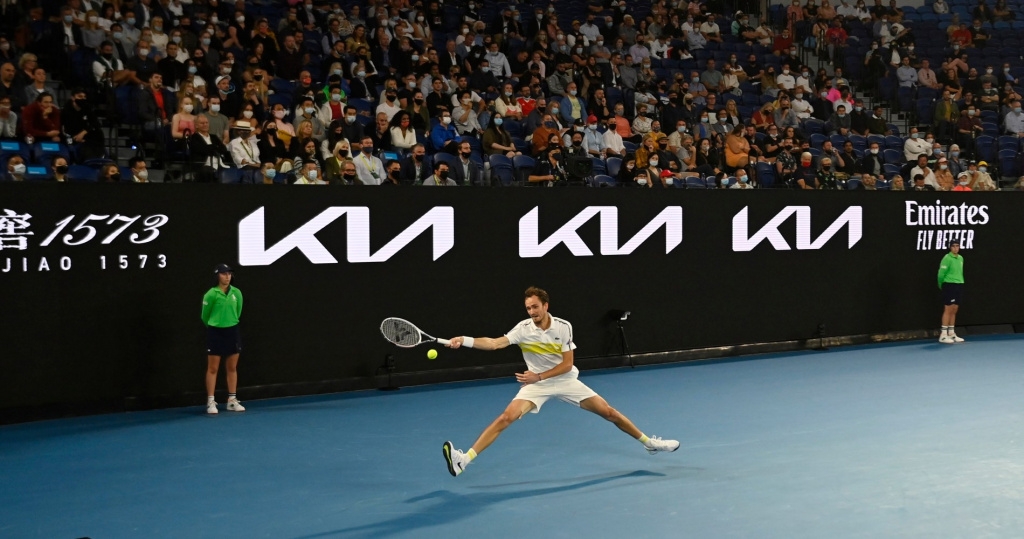 With just over 2,000 points separating Medvedev and Djokovic in the rankings, suddenly it doesn’t seem crazy to think that the Russian has a chance to do it. He knows he will have to produce some amazing results to get there, but is looking forward to the challenge.

“For sure I mean it’s a great challenge,” he told Tennis Majors on Sunday after the final. “The higher you go, I always said that becoming No.2 tomorrow it’s going to be a goal I already achieved, so the next one is No.1 – there is nothing higher than that. Of course for this I feel like you need to win Slams, especially with Rafa and Novak playing. You know they are not going to let you just get there with some good results on 500 and Masters, so you need to make some amazing results. But if I continue the good work, if I continue to show some of the results I was capable of, I definitely have the chance, but it’s not easy, especially with all the guys that are fighting against you on tour, 365 days, all year long.”