Home » News » ATP » Another turn on the road to RG: What we learned at Barcelona, Stuttgart, Belgrade and Istanbul

Another turn on the road to RG: What we learned at Barcelona, Stuttgart, Belgrade and Istanbul

We close the books on events at Barcelona, Belgrade, Istanbul and Stuttgart, and mark the key accomplishments of a busy week of WTA and ATP action. 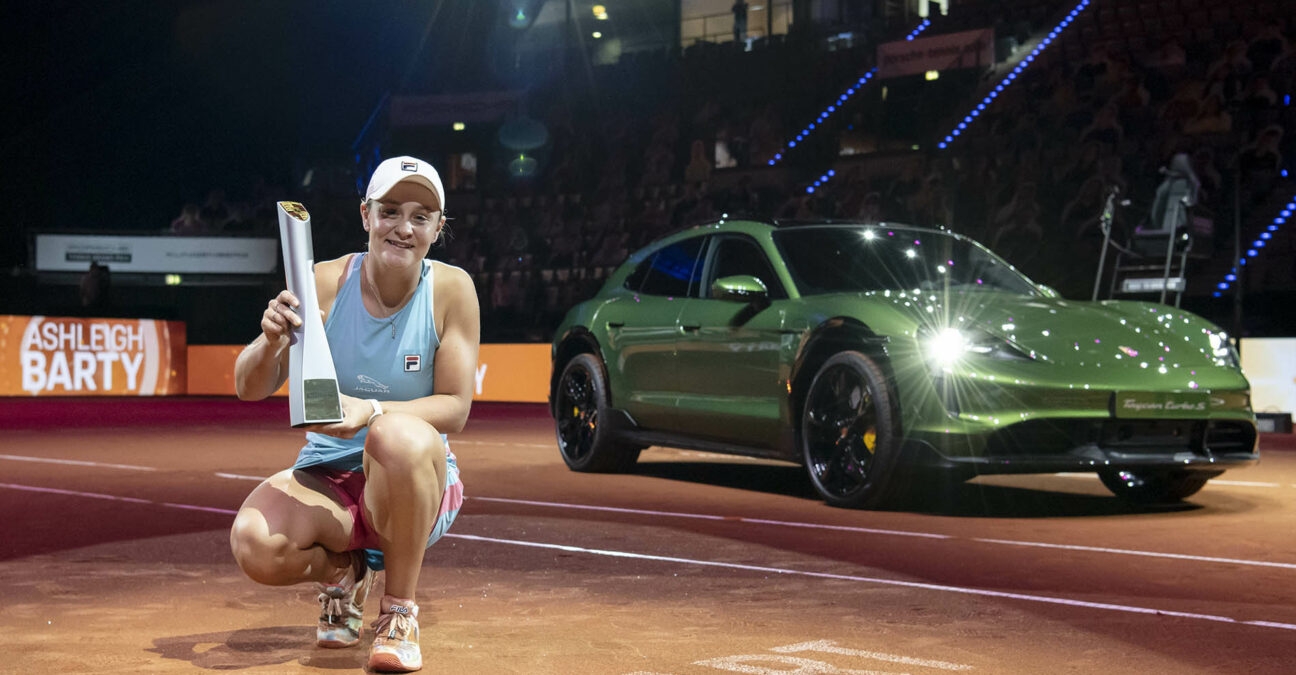 The Road to Roland-Garros took another turn this week, with ATP stops at Barcelona and Belgrade and WTA action in Stuttgart and Istanbul. So, what did we learn? Here’s a rundown of some of the notable moments from four spectacular events…

Rafael Nadal took his clay game to a much higher level than we saw last week at the Monte-Carlo Rolex Masters (where he lost to Andrey Rublev in the quarters) and the result was a resounding title run. The Spaniard battled past Stefanos Tsitsipas in the longest match of the ATP season (outside the Slams), 6-4, 6-7(6), 7-5. It was an epic contest that saw Nadal fail to convert two championship points in the second set, while Tsitsipas had a championship point himself in the third set. Nadal found a way to escape, and after the final he told reporters that he is pleased with the direction his clay-court game is heading.

“I think I have been able to play better and better during the whole week, every single match, and today was a little bit better than yesterday, and I think I have room to keep improving,” he said. “I mean, it was not perfect, I really believe that I can play better than what I am doing on clay, and I really hope that the victory of today is going to help me to raise a little bit of the level that I need today to fight for the next couple of events that I am going play.”

The numbers reflect the Spaniard’s greatness

Not much needs to be said about Nadal on clay – the numbers pretty much tell the story. He’s now an unfathomable 66-4 lifetime at Barcelona with 12 titles. That’s a lot of cannonballs into the deep end of the pool at the Club de Tenis Barcelona! Nadal clinches his 61st clay-court title and passes Daniil Medvedev to move back into the No.2 spot in the rankings. That ranking could come in very handy if he holds it until Roland-Garros as it will enable him to avoid Novak Djokovic until at least the final.

It was a brilliant two weeks for Greece’s Tsitsipas, who claimed his first Masters 1000 title at Monte-Carlo and then backed it up with an emphatic push to the final in Barcelona. Tsitsipas made his case for Roland-Garros contender status with the way he stayed with Nadal throughout the course of their battle. Tsitsipas, who entered the final with a career-best nine-match winning streak and 17 consecutive sets won, said it best himself when he commented on the championship point he held, with Nadal serving at 4-5, 30-40 in the final set.

“I was looking for a win today,” he said. “I felt like I was close, and I felt like there were opportunities that I had, for some reason I didn’t take, I felt I could have pulled off better tennis today, but I’m happy that I brought him so close. … I was literally two centimetres away from winning that match.”

Jannik Sinner continues to progress at a rapid clip on the ATP Tour, and this week he demonstrated why he’s on the fast track to the top 10 when he took out Roberto Bautista Agut for the third consecutive time (amazing feat for a teenager) and then toppled third-seeded Andrey Rublev in the quarter-finals. But perhaps most impressive was the way that Sinner responded to his 6-3, 6-3 loss to Stefanos Tsitsipas in the semi-finals. It is refreshing to see a teenager expect to win against everybody he plays on tour, even established veterans.

“I had chances I didn’t take the chances, he had chances and he took them,” he said. “Obviously a little bit disappointed for sure, but it’s tennis. The important points he played better than me, I think especially he served better than me and I think that’s the reason why he won today.”

Main Takeaway: It was a Barty Party, again

Not bad for a player who had never played on the slick indoor clay of Stuttgart before. After her first win of the week, against Laura Siegemund in round two, Barty talked about needing time to get comfortable on clay.

“It does take some time,” she said. “I don’t feel like I’m a cow on ice by any means. Each match you get better and better, you get used to the uneven surface under your foot, but yeah with each match that experience will come and that comfort will come.”

She may not be completely comfortable, but she is a true threat to win Roland-Garros again.

Key subplot: the emergence of Aryna Sabalenka on clay

It wasn’t meant to be in the final for Aryna Sabalenka, but this was a very important performance for her in Stuttgart. She notched her two biggest clay-court wins by ranking, over No.27 Annett Kontaveit and No.3 Simona Halep, and those victories should help her down the road in Madrid and Rome where, strange as it sounds, she has never won a main draw match.

Sabalenka says that adding elements to her game, like drop shots and sharp angles, have helped her succeed on clay.

“I’ve worked a lot on the touch game on the short crosscourt game, on the aggressive game, so I’ve worked a lot,” she said. “Yeah, for sure it says that I am on the right way and I’m doing the right things. I would say my game is more like, not like a clay court game, but I can play on the clay, and I think this big work which I put on my game, it’s a good step forward and gave me a lot of power, especially on the clay court.”

American Sofia Kenin was really upbeat during pre-tournament press about her clay season and her comfort level on the surface. After reaching the Roland-Garros final last season the American is hoping to prove that the breakout performance was no fluke. But she fell to Kontaveit in straight sets and will have work to do in Madrid and Rome, with a three-match losing streak hanging next to her name at the moment. A few more early losses would be really tough on the confidence.

Main takeaway: Karatsev proves, yet again, that he’s for real

In one of the most unlikely performances that we’ve seen since… Well, since Aslan Karatsev shocked the tennis world at the Australian Open in February: Aslan Karatsev saved 23 break points and upset Novak Djokovic in three sets in the semifinals at the Serbia Open.

The Russian wasn’t able to back up the win in the final against Matteo Berrettini, but Karatsev’s takedown of Djokovic was further proof of the Russian’s talent and unflappable nature under pressure.

Djokovic himself couldn’t help but be impressed:

“I have to congratulate Karatsev, who played very bravely, whenever he needed to come up with his best shots, he did,” the world No 1 said. “Congrats to him – awesome performance from his side.”

Key subplot: Matteo Berrettini is ready to be a factor again

It’s been a solid year for Italy’s Matteo Berrettini, who busted out of the gates with big wins over the likes of Dominic Thiem and Gael Monfils at ATP Cup and then reached the second week at the Australian Open before being forced to withdraw with an abdominal issue. A few months later it looks like Berrettini has made a full recovery and, after claiming his fourth ATP title, and third on clay, we must pencil him in on our short list of Roland-Garros dark horses.

Developing storyline: Novak Djokovic has work to do, and a schedule to clarify

As far as Djokovic is concerned, it was a better performance in Belgrade than we saw from him in Monte-Carlo (where he lost to Dan Evans). And there’s plenty of time for him to find his best form on the clay. No need to peak too soon after all, especially with Roland-Garros moving back a week in the calendar.

But the fact remains: it has not been an ideal start to the clay season and there is work to be done for Djokovic. This much he said himself on Saturday, but he still would not commit to playing at Madrid next week, so it is difficult to say where he intends to get the all-important matches under his belt.

“Roland-Garros still stays the main focus for me,” he said on Saturday. “I need to improve. I need to play better in order to have a chance for the Roland-Garros trophy I need to play much better than I did today, or in Monte-Carlo, so, yes, there is much work ahead of me, and hopefully it can be beneficial when it matters most in Paris.”

Entering the main draw, Sorana Cirstea was about as excited to play on clay as, say, Benoit Paire would be excited about playing in an empty stadium. The Romanian told Tennis Majors she was not looking forward to returning to the clay after spending most of her last year and a half on hard courts, but lo and behold, she emerged with the title in commanding fashion, not dropping a set as she raised a trophy for the first time since 2008.

“It was a funny feeling because the whole last year, during the lockdown, I was practicing on hard court and then only played two events on clay, Palermo and French Open, and those were very short for me,” she said. “So it’s been mostly a year and a half on hard court, so when I came back on clay, I was like ‘I don’t like this at all.’”

Marta Kostyuk, the promising young Ukrainian who looked so good in February when she reached the semi-finals at Abu Dhabi, has had a rough run thanks to injuries and a difficult bout with Covid over the last few months, but she appears to be finding her form again and looked good through three rounds as she notched victories over Daria Kasatkina and Ana Konjuh to book her second semi-final of the season.

Kostyuk is a great mover and a versatile talent who has the potential to be an excellent player on clay. It will be interesting to see how she performs at the WTA 1000 events in May, now that she is getting healthy again.

After four elbow surgeries nearly ended her career, 23-year-old Croatian Ana Konjuh is back on the tour and hoping to find her way into the Top 100. Based on how she is playing, all she needs is a few more wild cards. Konjuh reached the quarters at Istanbul, her first trip to the last eight of a WTA event since 2017, and will head to Croatia to play a 60k ITF event in Zagreb next week. Madrid has turned her down for a wild card, but she hopes that Rome will grant her one. She’s just a touch outside of the top 200 at the moment, but after wins over Madison Keys and Iga Swiatek at Miami, it’s clear that the game is still there, especially on faster surfaces.