Matteo Berrettini holds off Hubert Hurkacz in four sets in the Wimbledon semi-finals on Friday. Berrettini awaits either Novak Djokovic or Denis Shapovalov in his first Grand Slam championship match. 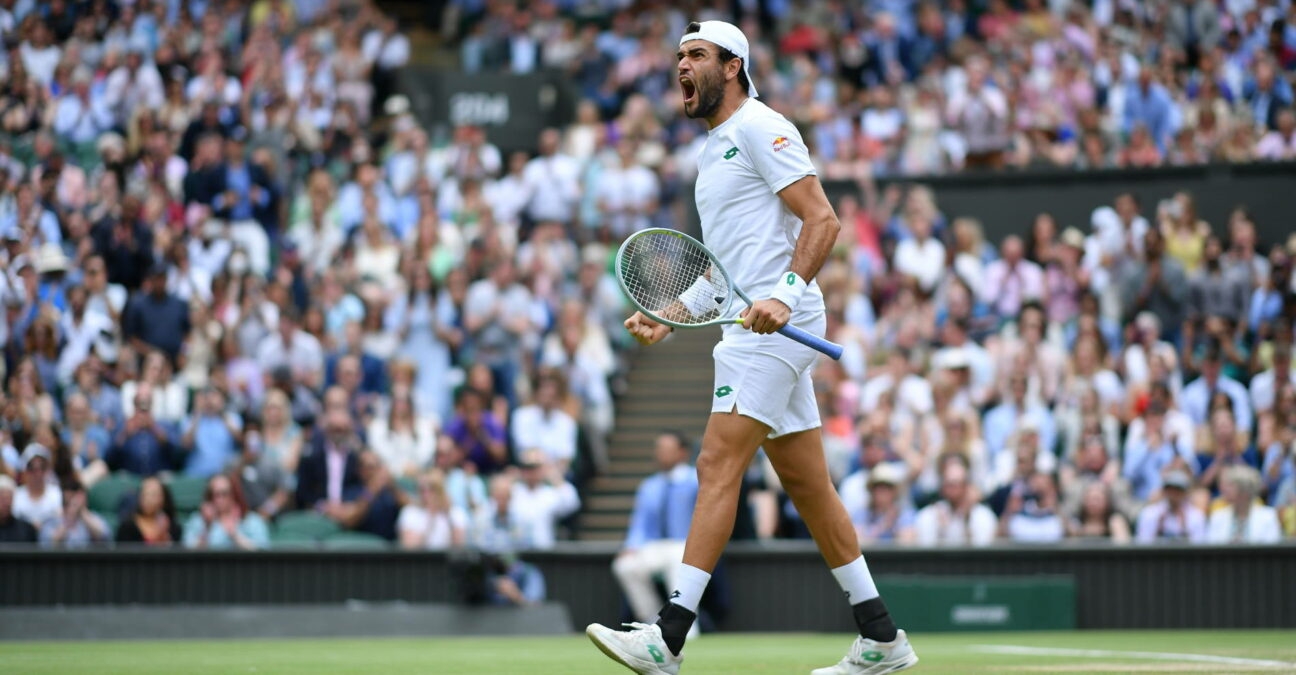 It’s going to take something special to beat Matteo Berrettini on grass this summer. Perhaps something like world No 1 Novak Djokovic on the other side of the net.

It remains to be seen if Djokovic is Berrettini’s next opponent, but the Italian knows this much: he is through to a Grand Slam final for the first time in his career. Berrettini advanced to the Wimbledon championship match by beating Hubert Hurkacz 6-3, 6-0, 6-7(3), 6-4 on Friday afternoon. The world No 9 blasted 22 aces while prevailing in two hours and 37 minutes. He will go up against either Djokovic or Denis Shapovalov or Sunday.

Berrettini too hot to handle for Hurkacz

The first two sets were a complete mismatch. From 2-3 down in the first set, Berrettini reeled off an incredible 11 consecutive games. He seized breaks at 3-3 and 5-3 in the first, dominated the second set without losing a single game, and then held serve to begin the fourth.

Whereas Hurkacz was the one issuing a bagel to Roger Federer during a straight-set upset in the quarter-finals, he had to stomach one himself on Friday. But it was only the second set, and therefore the 24-year-old Pole had a chance to bounce back from the embarrassment. That is exactly what he did, raising his level to force a tiebreaker in the third and taking it seven points to three.

Berrettini, however, was quick to turn the momentum back in his favor. Wimbledon’s seventh seed broke right away to begin the fourth set, and given that he had not dropped serve all afternoon it felt like the one break would be enough. That turned out to be exactly the case; Berrettini consolidated his lead the whole way, punctuating his win with a routine service hold at 5-4.

“I have no words,” the 25-year-old said during his on-court interview. “I need a few hours to think about what happened. I think I never dreamed about this because it was too much.”

It has been looking like a reality for a while now, though. Berrettini established himself as one of Djokovic’s top threats at the All-England Club when he captured the Queen’s Club title earlier this summer. He is now 11-0 on grass in 2021 thanks to six victories at Wimbledon — most of which have come in convincing fashion. Against Hurkacz, Berrettini was in control basically the entire way aside from the one hiccup in the third-set tiebreaker. The Italian finished with an incredible ratio of 60 winners to only 18 unforced errors, and he double-faulted only once to go along with his throng of aces. He also won 86 percent of his first-serve points.

Berrettini is 0-2 lifetime against both Djokovic and Shapovalov.