Home » News » Let’s stop talking about him in the future: Alcaraz is a member of the Big Three of 2022

Let’s stop talking about him in the future: Alcaraz is a member of the Big Three of 2022

By winning his first Masters 1000 on Sunday at the age of 18, the culmination of a stunning start to the season, Carlos Alcaraz went from the status of an immense hope to that of a star on the circuit. He is already shaping up to be one of the favorites at Roland-Garros. 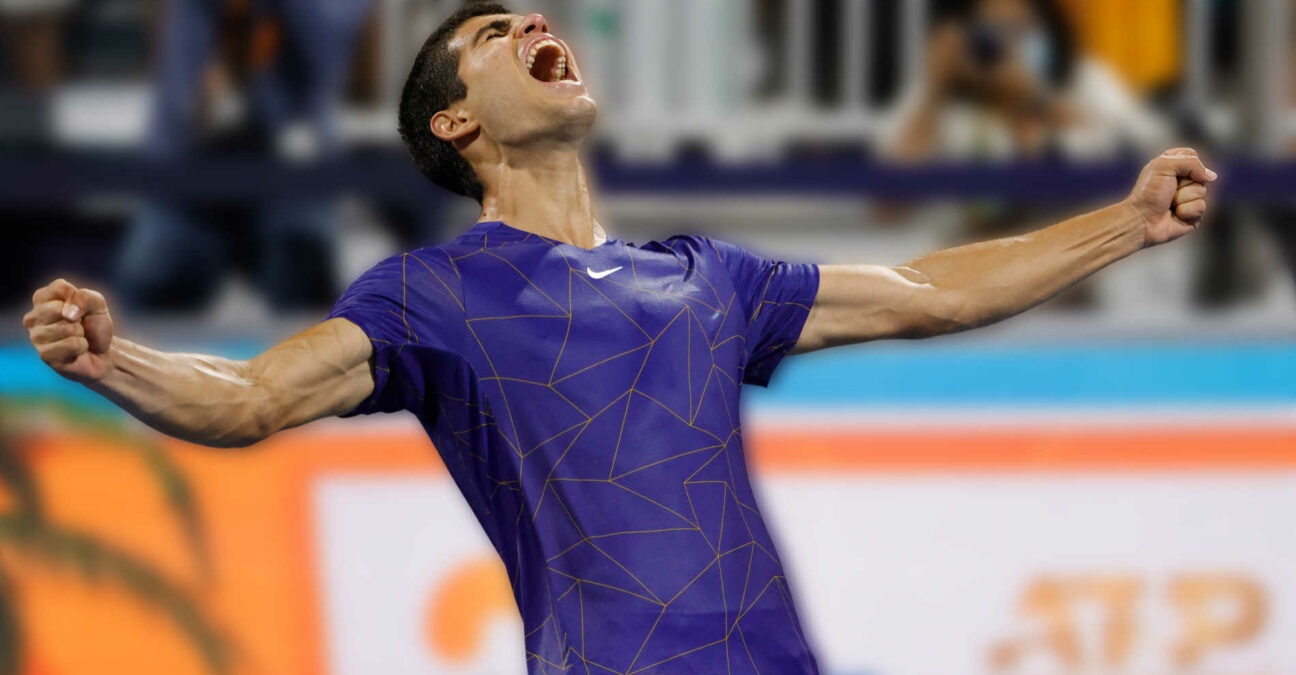 To those who like to record the legend of the sport, we recommend marking date of April 3, 2022, a bookmark slipped into the great history book of tennis. This is the day when Carlos Alcaraz definitely hatched in the world of giants by winning his first Masters 1000 in Miami. At 18 years and 11 months, Alcaraz mastered Norway’s Casper Ruud to become the youngest winner of the prestigious event, and the third youngest winner of a tournament in this category.

Of course, many didn’t choose to wait for April 3, 2022 to discover the immense potential of the rising Spaniard, who has been surging for at least a year, since he claimed his maiden ATP title (at Umag), and months later became the youngest quarter-finalist in the history of the US Open. The most seasoned followers of the Challenger or even Future circuit discovered Alcaraz’s promise much earlier.

Nevertheless, in the process of hatching a great champion, there is still often a landmark date, a victory that is somehow more significant or symbolic than the others. And we have it now. If the Big Three, by concentrating the majority of their efforts on the Grand Slams, have left the door open to many surprise winners in Masters 1000 in recent years, this coronation of Alcaraz, unlike others, looks a lot like less like a culmination than an outbreak.

It is enough, to be convinced, to see the tremors of the public who witnessed his coronation. And to learn that the King of Spain himself called him after the final. Not since the Big Three’s origins have we seen such a young player arouse so much excitement.

The parallel is striking between this coronation of Alcaraz and the final reached by another Spaniard at the same age, and in the same place, in 2005. At the time, Rafael Nadal had lost the Miami final in five sets against Roger Federer – after leading two sets to love. In the aftermath he completely exploded on clay, winning everything in his path before winning the first of his thirteen titles at Roland Garros.

Many reject the Nadal-Alcaraz comparisons as unfair, and they are, but it is impossible not to think about it, of course. History is too insistent in the signals it sends us: this Monday, the young Alcaraz finds himself second in the Race behind Nadal, who is almost twice his age and whose physical capital he has seriously damaged (stress fracture to a rib ) at the end of their fierce tussle in the semi-finals of Indian Wells, narrowly won by the eldest.

Result: four to six weeks off for Nadal who, according to the latest prognosis, will not resume until Madrid in early May. This leaves the field open to Alcaraz for the start of the season on clay and to break through the bar of the top 10 with which he is now flirting (11th in Monday’s rankings but not far behind No 10 Cameron Norrie). There is little doubt, given what he has shown since the start of the season, that he will quickly do it.

Truth be told: Alcaraz’s current level is not that of a top 10 talent: his is the game (and now the pedigree) of a top-3 player, and perhaps that of the best player in the world, in the absence, of course, of Rafael Nadal and Novak Djokovic (as well as Daniil Medvedev, also on the sidelines for a few weeks). The tennis world waits with baited breath to see how Djokovic and Medvedev will attempt to tackle the Alcaraz rock, which all others have broken their teeth on in recent weeks.

WHEN HE WAS 16-17, HE ALREADY HAD THIS ABILITY TO ADAPT HIS GAME TO THE LEVEL OF OTHERS. THIS IS A SIGN THAT HE HAD SOMETHING…

Since the beginning of the year, Alcaraz has 18 wins for only two losses. And it’s funny to note that the only two players who beat him ended up physically tarnished, Matteo Berrettini at the Australian Open (hand operation) and Rafael Nadal, stress fracture to rib, in Indian Wells.

Also noteworthy: Alcaraz became, in February, the youngest player to win an ATP 500, in Rio de Janeiro (on clay). A groundbreaking achievement, yes. It just didn’t have the same symbolic power of this title in Miami.

Arriving by surprise in Miami for the final, after having unfortunately buried his father in Spain, Juan Carlos Ferrero, the former world number one and coach of the rising force, was not overly surprised by the progress of his charge.

“I have known his potential for a long time,” asserted the one who, let us remember, refused a proposal from Stefanos Tsitsipas last year. “Already, when he was 16-17 years old and training with players better ranked than him, he had this ability to adapt his game to the level of others. It’s a sign that he had something special. My job was to allow him to stay on this good path. So no, his outbreak does not surprise me at all. But it’s true that it happened very quickly…”

We know we must beware of hasty projections and naïve assumptions. The history of tennis – and in particular very recent history – is replete with examples of players who quickly rose to prominence and ultimately remained stuck at the gates of glory, for various reasons, most often endogenous. Carlos Alcaraz has never won a Grand Slam before, and has never beaten any member of the Big Three. Difficult, under these conditions, to speak of a transfer of power, even if the 18-year-old’s emergence piques the imagination brilliantly.

But also difficult not to see in Alcaraz a resplendence a little different from the others. No matter how hard we look, we don’t see any flaws in him. Nor in his game, both brutal and surgical, already extraordinarily successful with clear progress demonstrated on the backhand side, naturally less fluid than his forehand. Nor in his tactical intelligence, tremendously developed at this age, like the many serve and volley forays he decided to execute in the final (especially on match point) when he saw – and exploited – the defensive position of Casper Ruud.

Nor in his physique, a perfect blend of power, endurance and tone.

And we find even less to criticize in his mental strength, which seems made to endure the complexity of this sport.

In Miami, Alcaraz once again impressed with his ability to negotiate important points well (21/25 break points saved in total) but above all with the audacity he shows in these moments. Some would say that he has not yet given all the guarantees that he can physically withstand the travails of best-of-five set tennis, given that he cracked in the quarter-finals in New York last year (retirement against Auger-Aliassime). But is there really any reason to have any doubts, especially given his physical evolution since then? The truth is that it would be beyond comprehension if this player did not soon find his way to the podium at a Grand Slam.

And why not in two months, on the terre battue of Roland-Garros, to stick a little more closely to Nadal’s career? The thesis, which would have seemed absurd a few months ago, took on a little more substance every day during the American tour. Until becoming, today, a very real possibility.

Already, Carlos Alcaraz is the third highest-ranked player at most bookmakers to triumph in Paris on June 5, behind – obviously – Rafael Nadal and Novak Djokovic. At the very least, he could be the arbiter between these two legends, hoping that one and the other land in great shape in Paris.

In the meantime, the Martian of Murcia will be the great scarecrow of the clay-court season which opens this week, in Houston and Marrakech. His program, very “Nadalian”, will take him successively to Monte-Carlo, Barcelona, Madrid and Rome, with the avowed objective of appearing in the first eight seeds in Paris.

If the very aggressive game of Alcaraz allows him to shine just as much – and even more according to some – on hard courts, let’s not forget that he is a Spaniard, and that clay runs through his veins. The staggering spin he imparts into each of his shots, his kick serve, which goes as high as a Barcelona duplex and, of course, the quality of his footwork seem cut out for the game on crushed red brick.

Not to mention one of his ultimate weapons: the drop shot, especially the forehand, which allowed him to win countless points in Miami (he was 51 out of 59 attempted before the final). Not because Alcaraz is inherently better than his colleagues. But above all because the shot is always played wisely, and because he has, on his side, a groundstroke acceleration capacity which constantly places his opponent on his heels, leaving him therefore vulnerable to a small carrot maliciously planted.

A slap, a caress: with Alcaraz, it’s true, you never really know what to expect. If not for the best, and probably for a long time…