Every day, Tennis Majors goes back in time to look back on a significant event for the tennis world. On December 26, 1947, Jack Kramer, facing Bobby Riggs, played his first professional match despite the snowstorm that hit New York City 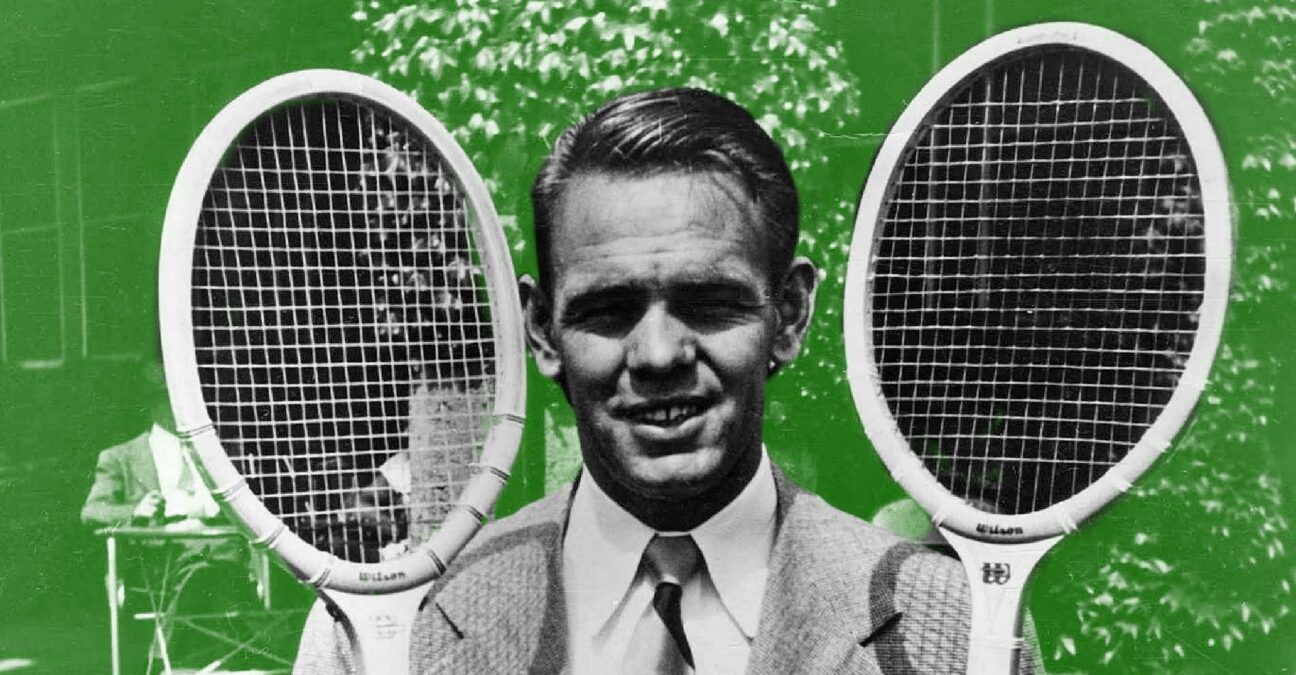 What exactly happened that day?

On this day, December 26 in 1947, Jack Kramer, who had won Wimbledon and the US Nationals as an amateur a few months earlier, made his debut as a professional player, facing Bobby Riggs at Madison Square Garden. Despite the worst snowstorm in New York history, more than 15,000 people were in the stands to see Kramer lose his first professional match, 6-2, 10-8, 4-6, 6-4. Riggs may have won this initial match, but it was Kramer who would have the upper hand on the entire tour (69-20), and went on to dominate professional tennis for the next six years.

Jack Kramer was born in 1921 in Las Vegas, Nevada. Known for his great serve and powerful forehand, he was the U.S. Junior champion in 1936, but it wasn’t until after the war that he achieved his first notable Grand Slam results. He won the US Nationals, known as the US Open today, in 1946 and 1947, as well as Wimbledon in 1947. After his second title at Forest Hills, where he beat Frank Parker (4-6, 2-6, 6-1, 6-0, 6-3), he signed his first professional contract in November with promoter Jack Harris. His professional debut was scheduled for December 26, against Bobby Riggs at Madison Square Garden.

Bobby Riggs, born in 1918 in Los Angeles, California, was an American player who played with precision and great tactical sense, with he used to manipulate his opponents to perfection, and which compensated for his lack of power. He first established himself as the world’s best amateur player when he won Wimbledon and the US Nationals in 1939. That year, at the All England Club, he won the singles, doubles and mixed doubles titles, and later claimed to have won a decent sum by betting on his triple success. He turned professional in 1941, following his second title at the US Nationals, but his career was then interrupted by the Second World War. When he dominated Don Budge in the final of the US Pro Hardcourts in Los Angeles in 1945, he became the best tennis player in the world. In 1946, he confirmed this status by defeating Fred Perry several times, and overpowering Budge in a 47-match tour. In 1947, he defeated Budge again in the final of the US Indoors in Philadelphia (6-1, 8-6, 6-3) and in the final of the US Pro in Forest Hills (3-6 6-3 10-8 4-6 6-3).

The meeting between Jack Kramer and Bobby Riggs took place at Madison Square Garden. At the time, Madison Square Garden (MSG) was not the one we know today (that one was built only in the 1960s). This MSG was inaugurated in 1925. Designed primarily to host boxing matches, it could accommodate up to 18,000 spectators with seating on three levels.

The facts: despite the worst snowstorm in New York history, crowds pack the stands to watch Jack Kramer vs Bobby RIggs

In late 1947, Jack Kramer, who had shown his worth as an amateur player by winning two consecutive Grand Slam titles, made his professional debut after signing his first contract with Jack Harris. Harris planned a match tour against Bobby Riggs, and the first episode of that tour was scheduled to take place at Madison Square Garden in New York City.

This was their first meeting as professional tennis players, but Kramer and Riggs already knew each other from training at the Los Angeles Tennis Club in the 1930s.

“I often played against Riggs in those days at the Los Angeles Tennis Club,” Kramer wrote in his book, ‘My 40 Years in Tennis’. He liked me too but he never left me alone. He beat me 6-0 for as long as he could… Bobby was always looking ahead. I want you to know who’s the boss for the rest of your life,” he said.

According to Sports Illustrated, both players were quite confident heading into the match.

“I’m thinking about taking Jack’s serve at least once a set and capitalising on that,” said Riggs, but his opponent didn’t feel that way.

“I’d be surprised if I lost the match,” said Kramer. “I have a stronger game and a better serve. If Riggs can handle my pace and attacks, he can beat me, but I don’t think he can.”

On the afternoon of December 26, 1947, while Kramer and Riggs were waiting in their hotel rooms, a snowstorm hit New York. Within a few hours, 70 cm of snow covered Manhattan, paralysing transportation. The players could walk to the venue but the question at that hour was no longer who would win the game, but how many spectators would turn up in these conditions.

And yet, when Kramer and Riggs left their locker rooms expecting to find a half-empty stadium, they entered the court in front of 15,114 spectators, who had all managed to make it to Madison Square Garden, despite the worst snowstorm in New York history!

“The only thing I could think of was, how the hell did they get here,” Kramer recalls. In fact, some of them even came on skis. Manhattan was deserted, the restaurants were empty, but the MSG was full to bursting with tennis fans who wanted to see the duel between two of the biggest names in tennis.

According to the Times Daily, the audience “cheers for Kramer, cheering for each of his beautiful shots and applauding Riggs’ fouls. However, on this day, Riggs’ consistency override Kramer’s aggressiveness. Riggs, the more experienced of the two players, won in four sets (6-2, 10-8, 4-6, 6-4), but in the end, as the New York Daily reminds us, more important than the result itself was the fact that a tennis match could push so many people to “make their way through the snowdrifts of the biggest blizzard in New York history [despite] the uncertainty of finding their own homes before dawn.”

What next? Kramer would dominate Riggs by the end of the tour

Jack Kramer lost eight of the first 14 games of the tour to Bobby Riggs, but then changed his strategy by following every serve to the net. Eventually, he got the better of Riggs, so much so that at the end of the tour, he led 69-20 against the man who had been the best player in the world.

Kramer would dominate men’s tennis for the next six years before a back injury forced him to retire. He would become one of the most famous impresarios in the history of his sport and played an important role in the creation of the ATP in the early 1970s.

Riggs would go on to become known for his sleazy dealings and his skimming of casinos, but most importantly, he would leave an indelible mark on the history of tennis for having initiated the famous “Battle of the Sexes,” dominating Margaret Court in a first episode in early 1973, before being defeated by Billie Jean King in September in the largest tennis event ever held in the United States.