Frenchman Corentin Moutet, The Tornado, produced an inspirational recovery – thanks to an underarm serve – to clinch victory over Fernando Verdasco in the last match of the opening day of UTS2. 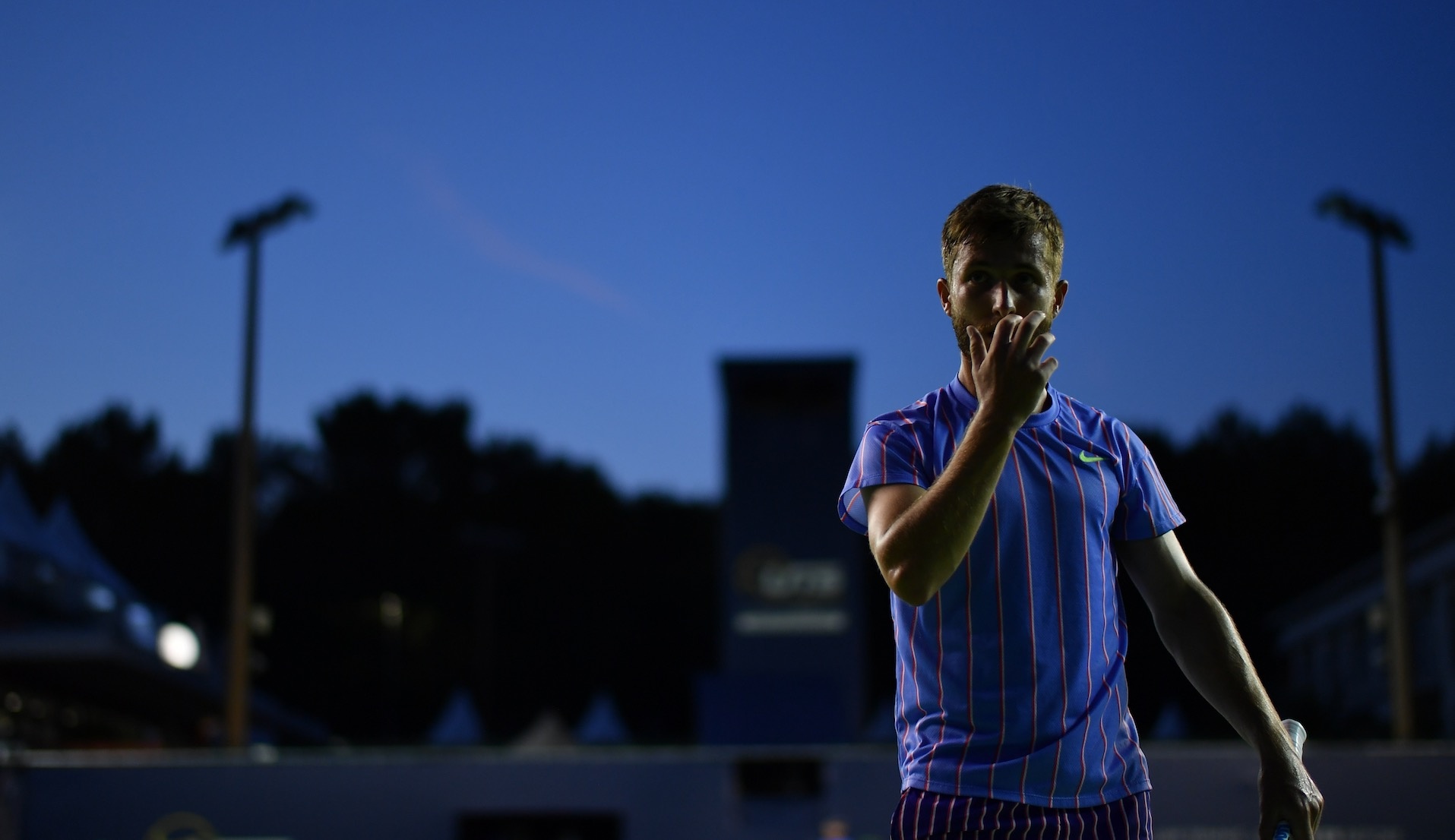 Corentin Moutet at UTS2, during a night session

El Fuego looked like he’d done enough when he led by two quarters to one, and 12-8 in the fourth, but Moutet found inspiration just when he needed it to snatch the fourth and then win sudden death 3-1, saving one match point in the process to clinch victory.

“I don’t know how I won,” Moutet admitted. “He was playing so good, pushing me back on my backhand. I had to find a solution.”

The 21-year-old, ranked No 75, said his underarm serve was more logic than instinct. “I think it’s the best way to make the three points because it’s an easy ball and he has to hit it into the court. If you hit too good a serve they can’t get it back into play. I didn’t expect to win this match after the third quarter. He was much better than me today but I just had to fight and get into the match.” 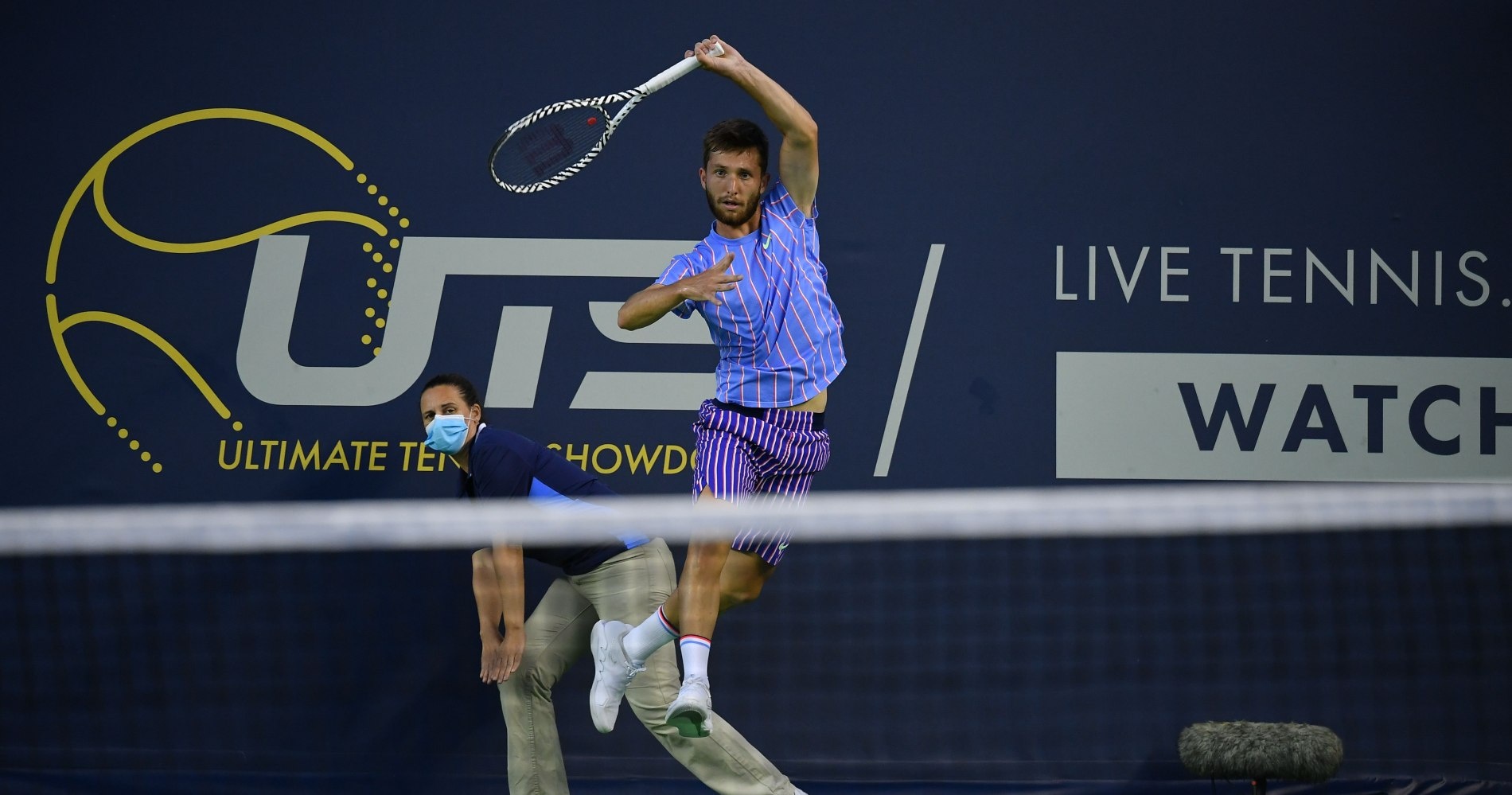 Former world No 7 Verdasco made a shaky start on his UTS debut, double-faulting on the opening point and The Tornado took full advantage, marching into a 9-3 lead before the Spaniard used his first card, the winner counts double.Though he won both points to cut the deficit to 9-7, the 21-year-old Moutet, one of the most colourful characters at UTS1 with his penchant for arguing with the umpires, stayed relatively calm, perhaps buoyed by having won their only Tour encounter, in Qatar earlier this year.

Moutet won both points with his winner counts double card – despite a line call that went against him and prompted a brief discussion with the umpire – to go up 15-7. The gap was too big for El Fuego to recover and The Tornado ran away with it to take the first quarter.

“I think even if it’s different cards, different rules with the no let, I think I am a little more comfortable with it,” Moutet said.

Spaniard shakes off the rust

The rust of the opening quarter was quickly shaken off in the second, though, as Verdasco – helped by two massive forehands – recovered from 5-3 down to level and then used his winner counts double card to go up 9-5. Moutet let his concentration slip when he dumped a backhand in the net to give Verdasco a 10-7 lead, his racket hurled into the side fence in disgust.

El Fuego was now flowing nicely and with his forehand working nicely, he won five straight points to lead 15-9 and then eased through the rest of the quarter. Moutet didn’t pick up his headset to speak to the commentators, instead happy to listen to the sounds of Bob Sinclar – who was courtside at the Mouratoglou Academy for all of the evening matches. 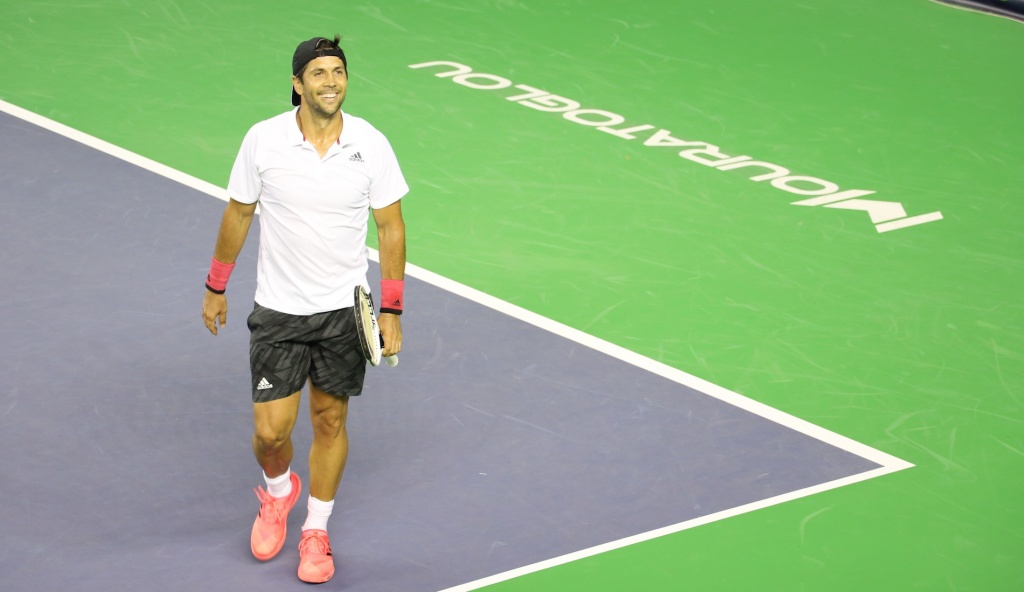 Maybe the break helped The Tornado as he led 7-3 in the third quarter but it doesn’t take much for Moutet to lose his way and the Frenchman lost his focus again.

El Fuego won a fantastic point to level at 7-7 and after the next point, he lost his rag with the umpire. The experienced Verdasco took advantage, with four straight points taking him up 14-9 while Moutet argued after his attempt to play a card had been missed by the umpire.

Verdasco cruised through the rest of the quarter while Moutet was still smarting as he sat down.

The Tornado’s mood was not helped when Verdasco’s serve dribbled over the net for a winner under the new rules to give the Spaniard a 4-3 lead, before the net again foiled him on the next point.

But Moutet then showed off one of his trick shots, pretending to go for a smash, purposely missing the ball, and then still having the time to put a volley away.

The nastiness of this trickery by @moutet99

That might have given him the impetus to produce a fightback, but Verdasco looked to have it wrapped up at 12-8 up, with just over a minute to go.

But when he needed it most, Moutet found the inspiration, playing an underarm serve on the first point with his winner x 3 card, putting the volley away for the winner to reduce the gap to one point.

He tried the same thing with the second point but with a two-point deficit at 11-13, he used his winner counts double card on return, and came up with a massive return of serve to pull level. A double-fault from Verdasco gave Moutet a two-point lead and he finished it off to force sudden death.

“What a comeback,” Moutet said, echoing the words of Benoit Paire when the two Frenchmen met in UTS1.

“I didn’t realise you could use that card on return,” Verdasco said.

With two straight points required to win sudden death, Moutet held match point after winning the first point only for Verdasco to level with a backhand volley. That gave El Fuego match point but The Tornado saved it and then won the match when Verdasco missed a backhand return.