Whilst Novak Djokovic may well have stolen the headlines for guiding his Serbian team to victory in the inaugural ATP Cup in Sydney, the World Number One hailed the win as a team effort.
But who, exactly, are those jubilant faces celebrating victory against Spain in the aftermath of the final? 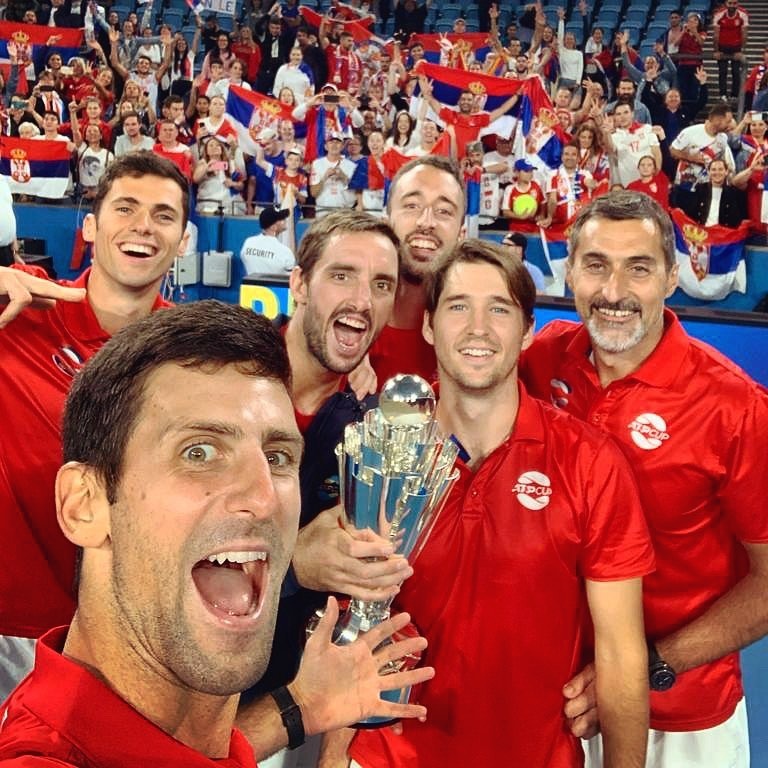 From Left to right

With the exception on Nikola Milojevic, every playing member of team Serbia was involved in the team victory which, against some very strong teams, represented something of an upset of sorts.

Having seen off his arch-rival Rafael Nadal 6-2, 7-6 in the second singles rubber against Spain after Roberto Bautista Agut beat Dusan Lajovic 7-5 6-1, Djokovic teamed up to partner Viktor Troicki to a 6-3 6-4 doubles win over Pablo Carreno Busta and Feliciano Lopez.

“I have been blessed for all my career to have such a teammate and friend. Yeah, one of my best friends, actually, as Novak,” said Troicki, pictured holding the trophy. “We grew up together. We played team competitions ever since we were kids. So I always, whenever we played, you always counted that point. I mean, I cannot imagine the pressure he has always winning all those matches, but I want to thank him for that.

“I have been in so many different situations where he gets the team out, he wins his singles, and then we have to decide it either in doubles or some one of us has to win the other singles.”

It wasn’t just Djokovic and Troicki, however, that were important in Serbia lifting the trophy. Dusan Lajovic (pictured second from right), played his part in the semi final win with a straight sets singles victory over Russia’s Karen Khachanov and also beat Canada’s Felix Auger-Aliassime in quick time in the quarter-finals.

“Last year I realized that I can play tennis on a much higher level, and I did some great results in clay, but I knew that I still had the space to improve on hard court,” said Lajovic. “I was doing a lot of work, working a lot on myself mentally and tennis-wise and everything else. In the preseason was the first time in three years I could practice without pills, so I was pills-free the whole preseason. This was a big benefit for me.

“And going into the ATP Cup I knew that I’m going to have three matches for sure in the group stages, and this also gave me a little bit of confidence. On the side of that, I think that I would not be able to play on such a high level if it wasn’t for my teammates who were there all the time. You know when you don’t play just for yourself, you try to push even more even when it’s not going well. From the first match, I didn’t start off well, second match I didn’t start off well, but I was fighting a lot, and that gave me the extra confidence for the next matches.”

For team captain Nenad Zimonjic (pictured right), the victory was another special one, but this time from a different perspective to lifting the Davis Cup for Serbia as a player back in 2010.

“I have to say that we all expected from Novak to play on a high level and that he will deliver, which he’s been doing over and over again, which is not easy at all to do. I want to congratulate him on that. He did really well, both in singles and doubles. For Dusan, as the tournament was progressing, his level was going higher and higher and higher, and I think he surprised himself, as well, on how high level he can actually play on hard courts, as well.

“Also Viktor helping in winning all the doubles matches pretty much, two deciding ones, and partnering with first time playing for the country Nikola Cacic (pictured far left), who I thought also was really well prepared and played on a high level from the first match on.

“And that first tie that he played, it was very important win, because it was a group stage, and we didn’t know how it’s gonna go. So they won straight sets against a good team, experienced team, so really proud of all of them. Nikola Milojevic (pictured centre) didn’t get a chance to play, but he was with the team, supporting the guys, and practicing and getting ready for his Australian Open.”