Home » News » Western & Southern Open day two recap: Bublik has some fun and Dimitrov is back!

Western & Southern Open day two recap: Bublik has some fun and Dimitrov is back!

Alexander Bublik lost on Sunday, but he was still one of the main attractions at the Western & Southern Open. Grigor Dimitrov, Alize Cornet, and Veronika Kudermetova also made headlines. It was another eventful day of action on day two of the Western & Southern Open, as both the first round and second round were underway. Sunday brought us upsets, marathon matches, plenty of flair, and a whole lot of fun. When it was all said and done, the first round had come to an end, two players on both the men’s and women’s side were through to the third round, and the stage was set for a thrilling Monday.

At 35 years old, Vera Zvonareva is still getting after it on the WTA Tour. The Russian has endured all kinds of injuries and surgeries to go along with the birth of her first child in 2016, but none of that has stopped her from giving up on professional tennis. Sunday’s proceedings in New York once again confirmed that notion.

Zvonareva won not one but two different matches — both singles and doubles. After beating Magda Linette 1-6, 6-3, 6-1, the former world No. 2 teamed up with Ekaterina Alexandrova to defeat Gabriela Dabrowski and Alison Riske 6-3, 6-4. Having gone through singles qualifying earlier in the week, as well, Zvonareva has now won four total matches at this event.

Vera Zvonareva comes from 1-6, 2-3, 0-30 down to stun Magda Linette in three sets, moving into the second round of the @CincyTennis!

For a different reason, Grigor Dimitrov also did not have high expectations heading into the Western & Southern Open. The Bulgarian may still be in his prime at 29 years old, but he has been struggling since reaching the semifinals of the 2019 US Open. Among his issues this summer was a tough bout with Covid-19. After recovering, Dimitrov showed up at UTS2 but was not yet back in peak condition and struggled mightily.

Uncertain to even play the Cincinnati Masters, the former world No 3 did a lot more than that on Sunday. He won his first-round match in impressive fashion, cruising past Auckland champion Ugo Humbert 6-3, 6-4 in one hour and 24 minutes.

It was a performance worthy of his colourful attire, too.

2017 @CincyTennis champion @GrigorDimitrov is in the house, in living color 🎨

Millman up to usual tricks

Not every day at the office was as routine as Dimitrov’s. As usual, nothing was easy for John Millman — who is no stranger to playing his part in gruelling baseline battles. To the surprise of no one, that is exactly what transpired in his first-round showdown against fellow counter-puncher Adrian Mannarino. The two tenacious veterans needed three sets, almost three hours, and a decisive tiebreaker in order to separate themselves. In the end, it was Millman who prevailed 4-6, 6-4, 7-6(2) in two hours and 46 minutes. The Australian recovered from a break down in both the second and third sets, saved three break points at 4-4 in the third, and fought off another break point at 5-5 in the third.

MILLMAN WINS COMEBACK MATCH IN NEW YORK
The 31-year-old posted a 4-6 6-4 7-6(2) win over France’s Adrian Mannarino in the opening round of the Western & Southern Open in New York today.#Cincinnati #CInCyTENNIS #CincinnatiOpen pic.twitter.com/fY3ATS0pE6

Before the top two seeds on the men’s side (Novak Djokovic and Dominic Thiem) even take the court for the first time, the WTA draw is already without its top two. Both No. 1 Karolina Pliskova and No. 2 Sofia Kenin lost their opening matches on Sunday night. Pliskova succumbed to Veronika Kudermetova 7-5, 6-4, while Kenin was upset by UTS2 runner-up Alize Cornet 6-1, 7-6(7).

An absolutely wild second set between Cornet and Kenin saw the Frenchwoman lead 5-2, 40-15 with double match point. But the reigning Australian Open champion somehow managed to force a tiebreaker and even held two set points of her own. In the end, though, Cornet got across the finish line on her fourth match point.

Don’t need a crowd to get crazy

Could the Cornet-Kenin outcome have been different with fans in the stands? We will never know, of course. But the 30-year-old, who got used to playing in front of no fans at UTS, was asked about it in her press conference.

“I cannot know,” Cornet answered. But what I know is that I don’t need any crowd to get crazy inside. So I don’t think that would have made me more negative or more crazy or more anything on the court when I have all these feelings coming up and taking possession of my body. If the crowd is here or not, it doesn’t change anything. Maybe it would have given me a little bit more energy, because the crowd sometimes pushes you to go over your limit. But even this, I don’t need anybody to go over my limits all the time.

“But it’s an interesting question, and you can never have the answer to know if this match would end differently with a crowd or not. What I know is I don’t feel that it impacted me so much on the court. I feel pretty much the same player. I’m pretty surprised about it — like happily surprised.”

John Isner agreed that the lack of any real atmosphere did not hurt his performance. Isner played on the Grandstand, a court on which he has already played almost 10 times in the last four US Opens, so he was perfectly comfortable even without fans.

“I have played on that court before, Grandstand court of course at the US Open,” the 6ft, 10in American reflected. “It’s been a great court to play on because the atmosphere has been amazing. We don’t have that right now. No sports have that. So you sort of just gotta rely on yourself to pump yourself up, to give yourself a lot of adrenaline. And, look, I just think we have been off for six months now and the guys are just happy to be back on the court. Of course we want to win. We’re just happy to be back competing. I think that takes over from the fact that there is no one in the stands.”

Quote of the Day

Karen Khachanov kicked off his campaign with a 6-4, 6-4 victory over Alexander Bublik on Sunday afternoon. It didn’t last particularly long (one hour and 24 minutes), so both men had some energy left over for another activity. And apparently the Russian beat Bublik again!

Khachanov: “The match finished; [Bublik] actually took it easy, he was not pissed and he just asked me if I want to play one or two games in basketball. I destroyed him there, as well, so you know he goes home 2-0 down.”

After Nike made a fashion statement on Saturday, when the likes of Felix Auger-Aliassime, Denis Shapovalov, and Tommy Paul were rocking colourful outfits, Fila made a counter attack on Sunday. Among those sporting Fila’s news clothing line was Diego Schwartzman, who defeated Casper Ruud 7-6(2), 6-3. It is unclear if Ruud was blinded by the Argentine’s shirt, or if he simply was not good enough. 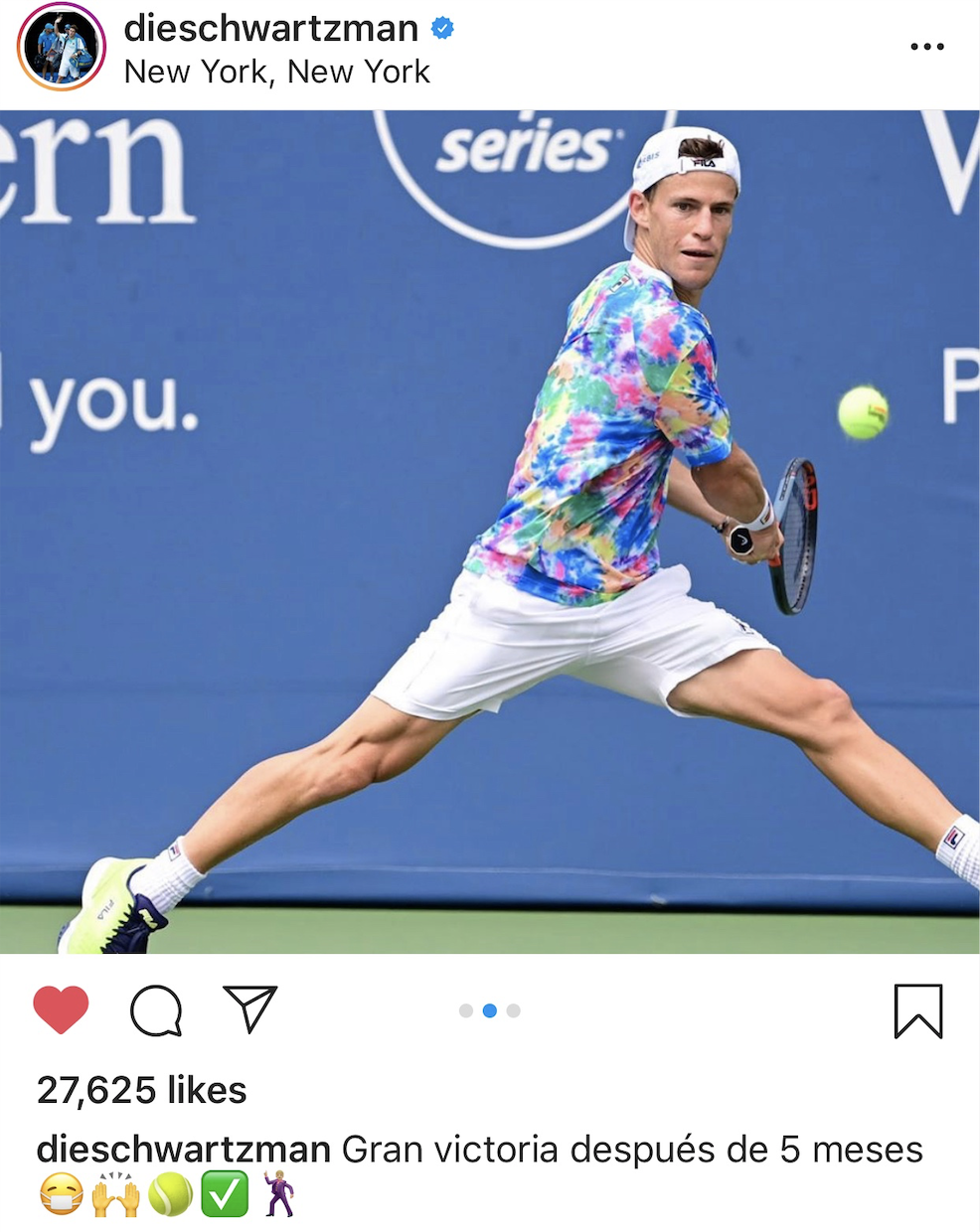 Points of the day

Isner is also with Fila, but chose a more conservative pattern and let his tennis do the talking. The 6ft 10in American got the best of Cincinnati doubles partner Hubert Hurkacz 7-5, 6-4 and converted match point in especially impressive fashion.

And then, of course, there is always Bublik. The Kazakh did not wait long — in fact, he did not wait at all — to showcase one of his usual underarm serves. He did it on the first point of the match against Khachanov…before the umpire had even finished calling time!

Second-round action will conclude on Monday, and plenty of mouth-watering match-ups are on the cards. Here is part of the schedule: