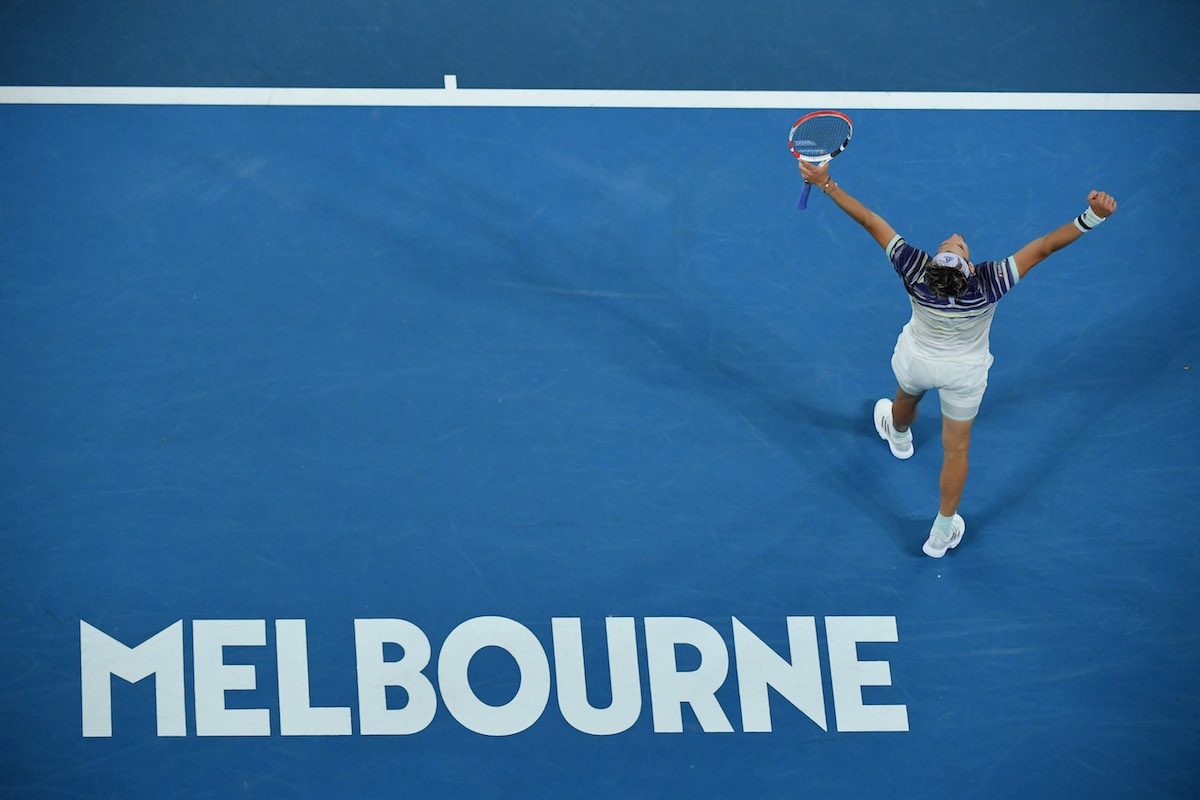 The last time world number one Rafael Nadal Nitto ATP Tour finalist Dominic Thiem in a hard court Grand Slam encounter, it produced an absolute classic with Nadal winning through in a tie break after four hours and 49 minutes at the 2018 US Open.

Whilst Thiem was on the wrong side of the result in Flushing Meadows, this time, vying for a place in the semi finals of the 2020 Australian Open and a match-up against Alexander Zverev, the young Austrian was in inspired form, eventually holding his nerve against one of the most combative of all opponents to win out 7-6, 7-6, 4-6, 7-6.

“I just wanted to stay in the match and then I got the break. I was really holding my serve great then and it came to 5-4, a special situation for me, serving for the match against Rafa for my first semi final at the Australian Open,” Thiem explained to Jim Courier after the match, having been broken when serving for the match at 5-4. “It was such a mentally tough situation and I couldn’t handle it but I turned it around again in the tie breaker.”

The match started as the ‘battle in the Big Apple’ ended, the gladiators trading blistering groundstrokes and matching one another with outright winners. From game one, another epic seemed firmly on the cards. The first point of the third game was a case in point, a marathon rally that could have belonged on their preferred red clay. It would be the first of many.

Nadal appeared to have taken charge of the opening set came in game eight when Thiem, flawless thus far on serve and with new balls, was broken to love thanks to a quite exquisite lob from the Spaniard from a Thiem drive volley. The Austrian wasn’t reading the script, however, breaking straight back with one of his trademark backhands.

Perhaps almost inevitably, following the pattern of New York, the opening set would be decided on a tie break. The odds were stacked in Nadal’s favour, the Spaniard boasting a 3-1 breaker record over his opponent and superior tournament percentage. But it was Thiem who took the advantage this time with a mini break that followed a superb cat and mouse point of drops, slices and volleys – the rally of the set. Back came Nadal with a rasping inside-out forehand winner but, when missing a carbon copy, Thiem nailed a superb forehand return to earn three set points – taken at the first attempt with another forehand winner into the corner.

Into the second, and a gift-wrapped break to love for Nadal in game five, a second double fault handing back the initiative. A first time violation on serve could have rattled Nadal, the Spaniard telling the umpire “you don’t like good tennis”, perhaps inferring she should have been lenient after a gruelling previous rally. Instead, it inspired him to hold and consolidate the break.

Then, just as Thiem threw in a sloppy service game, so Nadal followed suit in the same manner, a double fault helping the Austrian level up at 4-4, Thiem missing a solitary set point on the Nadal serve before the duellists headed into another breaker.

As was the case in the opening set, it was Thiem who decided to be the early aggressor, surging into a 4-0 lead. Then, perhaps with his mind already on the third set, more tentative play set in, allowing Nadal back to 4-4 before a lucky net cord forced a scrambling Nadal to dig up the ball at the net, setting up a simple pass for the set.

Nadal, back to the wall

Nadal is a notorious front runner and renowned fighter, but with a 3-19 career record when down two sets to love, the writing appeared very much to be on the wall. The last time Nadal staged such a fight back was at Wimbledon in 2007, but good a player as Mikhail Youzhny was, and possessing a similarly venemous single handed backhand, a young Thiem in current form was an entirely different prospect.

The Houdini act started at 5-4 in the third, a netted Thiem backhand bringing the first break and with it, the set, Nadal pumping both arms downwards in celebration. One lock was unpicked but there were still two more remaining.

Momentum with him and adrenaline coursing through the veins in his Popeye arms, Nadal muscled his way to three break points in the opening game of the fourth but Thiem nervelessly found a way out of the predicament before breaking himself, as Nadal mistimed a whipped forehand wide and long.

Whilst at the start of the set, Nadal had looked the stronger, it was now Thiem who again began to believe this was indeed his night, superb depth off the ground forcing Nadal into uncharacteristic errors.

But, as he always does, the man from Manacor fought to the last, much akin to the bull that emblazons his shoes and clothing, fighting to the death against the skilled matador. Against all the odds, the bull sometimes wins…

“Demons in the head”

And with Thiem serving for the match at 5-4, a nervous wobble. A huge double fault followed by forehands wracked with nerves, allowed the fighting Nadal a path back into the match. Forehands and backhands now carrying extra whip and venom, Nadal had his young opponent on the run once again but Thiem admirably held to force another breaker.

“It’s a little bit like demons in the head, like Roger said. It’s true,” said Thiem of his wobble. “Everybody has it and I was just rushing way too much, changing the tactics from all the match and it was wrong. Of course it’s very tough to handle at 5-5 against Rafa and the match starts from zero again. But that’s tennis. You have to deal with the situation almost every single game, so I’m very happy I won the tie breaker!”

At 6-4 up and with the match on his racket with a mid-court forehand, the nerves of serving out for the match returned for the Austrian, his shot finding the net when it seemed harder to miss. That Thiem followed up with a rasping backhand winner was as brilliant as it was inexplicable and, on the second match point, it was Nadal who found the net.

Finally, and for the first time against his opponent in a major, it was Thiem who raised his arms aloft at the end of another epic battle. Just as Alexander Zverev found a way past the experienced Stanislas Wawrinka earlier on, so Thiem discovered a way of solving the puzzle of Nadal. A changing of the guard? Only time will tell, as either Novak Djokovic or Roger Federer awaits either pretender to the crown in Sunday’s final.