Arthur Fils was ranked 166th in the juniors before the start of the prestigious Orange Bowl, but he nevertheless imagined lifting the trophy. The 16-year-old achieved his dream and is approaching 2021 with a keen appetite. 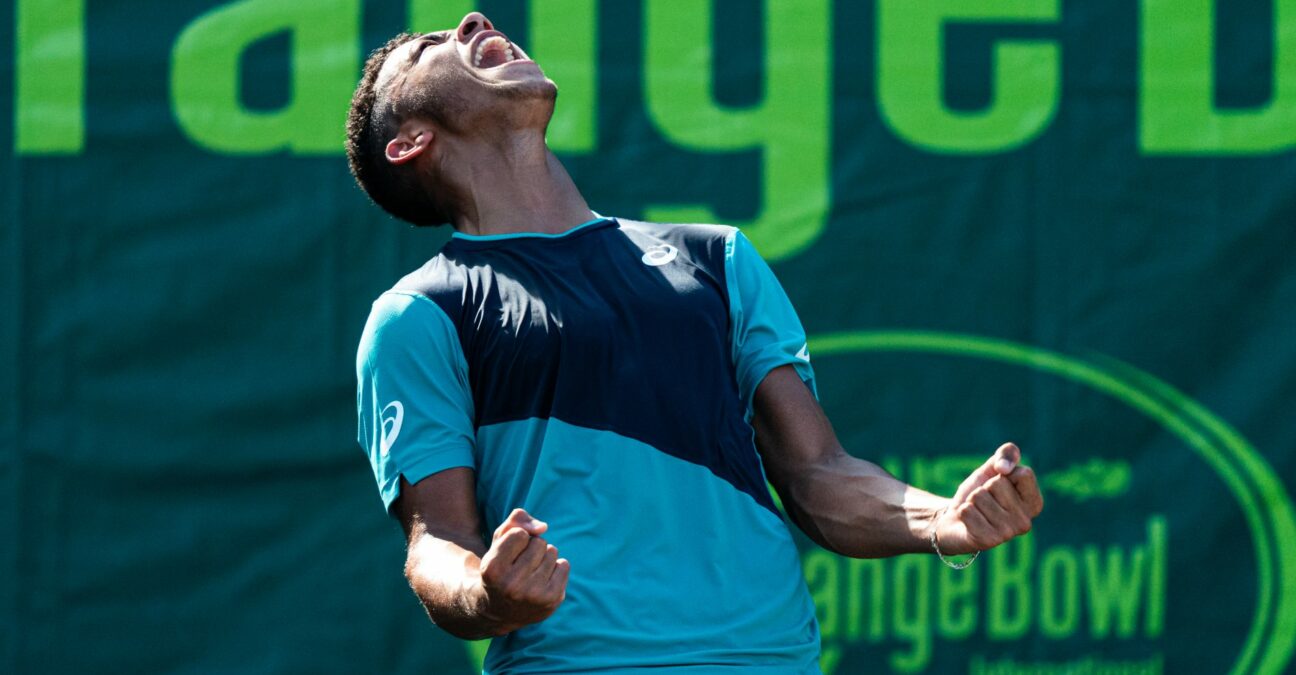 His mask did not allow his smile to be seen. But the playful tone of his voice was enough to tell that Arthur Fils was on his own little cloud, just after his unexpected win at the Orange Bowl on Sunday.

Ranked 166th in the ITF junior rankings ahead of the tournament and relatively unknown to observers – according to one of the four journalists present at the winner’s virtual press conference – the French teen delivered the perfect shot. And this at only 16 years of age, two less than opponent Peter Fajta, who was the top seed in the 18 and unders and already holds an ATP ranking of 972nd.

“I did some bullshit,” he said in English not so stammering for a teenager. His coach alongside to accompany him in the press conference, whispered to his charge that it was better to say “mistakes.”

Full of freshness, Fils appreciated the opportunity to regain control of the situation against a “tired” Fajta, the Hungarian having also won the doubles title this week on the clay in Florida.

“I am very happy,” said Fils, who was interviewed via Zoom. “It was still a tough game. But I played well. I was focused on the goal.”

Because he was perhaps the only one to believe it, even if the field was particularly open this year at the Orange Bowl due to the absence of the entire top 25. But Fils, who trains at the Saint-Michel club, a stone’s throw south of Paris, made the trip to Florida with the ambition of lifting the trophy.

“Otherwise, I wouldn’t have come,” he said. “I put all odds in my favor. I was very excited to play the tournament, because I knew I was in good form. I played good guys, seeds. But since I entered the court telling myself that I could beat them by being stronger, it was okay.”

Yet in the first round against unranked US wildcard Michael Zheng, he almost exited. Fils saved a match point in the second set, before going on to win (3-6, 7-5, 6-2).

“I thought maybe that was the trigger, to turn the match around and then go to the end of the tournament,” he said. “As the rounds went on, I felt better and better. I’ve had some good matches, I had others that were more complicated. But I was confident in every match I approached. “

If Fils was so sure of himself, it was because of his recent play. In September, he won his first title on the ITF circuit, a Grade 4 in Eindhoven, and won two rounds at the French Open juniors before losing to his compatriot Sean Cuenin. At Roland-Garros, he made his debut at a Grade A junior tournament, with the Orange Bowl being only his second one in that top category.

“I gained a lot of confidence at Roland-Garros,” he said. “Earlier in the season, I knew I was playing well, but that didn’t translate into results. But I am in continuity…going from Grade 4 to Grade A, and winning it, it’s good for the confidence. It makes me train even harder.”

Fils obviously didn’t need that. Even if he admits having lived, like many, a “complicated” period during the coronavirus pandemic, he has not relaxed his efforts to continue his progress.

“During the confinement period, I trained hard. I even said to myself that it was a period when I could maybe get ahead of the others. As soon as I returned to the tournaments, I applied myself, to stay focused on my matches, my tournaments, my recovery. In the end, I won the Orange Bowl. Not bad,” he added.

It is also a success, in the most prestigious junior tournament behind the Grand Slams, which further validates the success of the French system. Indeed, French tennis is full of talent that shines on the junior circuit. Elsa Jacquemot became this week the junior girls’ world champion after her success at Roland-Garros in October.

Harold Mayot won the boys’ world title and the Australian Open earlier this year against his compatriot Arthur Cazeaux in the final, who just won his first Futures title.

Five French players are among the top 25 males in the ITF rankings (Mayot, Cazeaux, Timo Legout, Martin Breysach, Lilian Marmousez). So many factors that contribute to a positive feeling from which everyone benefits, as Fils recognises.

“It’s super positive. We see one who plays well and we tell ourselves that we are capable of doing the same thing,” he said. “Especially this year, we all played pretty well. We always train together and that pushed us all to the top.”

The fourth French male player to win the U18 tournament in history, after Guy Forget in 1982, Gianni Mina in 2009 and Hugo Gaston in 2017, Fils is far from considering his victory as an end in itself. He is already looking forward with gusto to the coming season.

“My goal in 2021 is to play all the junior Grand Slams. In terms of ranking, it will be good now,” he continued. “But I will try not to dwell too much on the juniors and go for Futures, I would like to win one in 2021. But that, I will discuss with my coach. I always said to myself that I wanted to win a junior Grand Slam before moving on to the pros.”

And he already has a preference.

“I like Roland-Garros,” he said. “But the Grand Slam that makes me dream the most, it’s Australia. It’s been like that since I was little, I watched the night sessions. I like the courts and the atmosphere.”

It won’t be in 2021, though, as the Australian Open junior tournaments have been cancelled due to the coronavirus pandemic and global health situation. To win in Melbourne, Fils will therefore have to wait until at least 2022.

Not so easy for a boy in a hurry.