Cameron Norrie has become one of the most consistent players on tour in the last two years, but despite finally cracking the top 10, he isn’t satisfied.

Instead, he’s now set himself an even more challenging target.

“And I was thinking about it when I was on the cusp of making it for like three or four months in I was making all these points and I wasn’t going ahead in the rankings, and then when I was when I finally made the top 10 it was pretty cool. 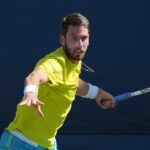 “But the kind of thing about tennis is when you do something like that, then you want to do something else: be top five and top three and then aiming towards No 1 in the world. So it’s never enough.”

Norrie: Wimbledon was so cool

Ahead of featuring in the Diriyah Tennis Cup exhibition event, the 27-year-old said that reaching the semi-final of Wimbledon is his new career highlight.

“I obviously had a great year last year,” he said, “and I wanted to back that up and I felt like I did that and I played a few finals and won a couple of titles, but the highlight was Wimbledon and making the semi-finals there – especially at home with everyone supporting me, my friends or family all there at probably the biggest tournament in the world. So that was very cool.” 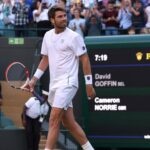