Having qualified for his first Nitto ATP Finals, Andrey Rublev tells Simon Cambers why finding the balance between intensity and calmness is the key to his success. 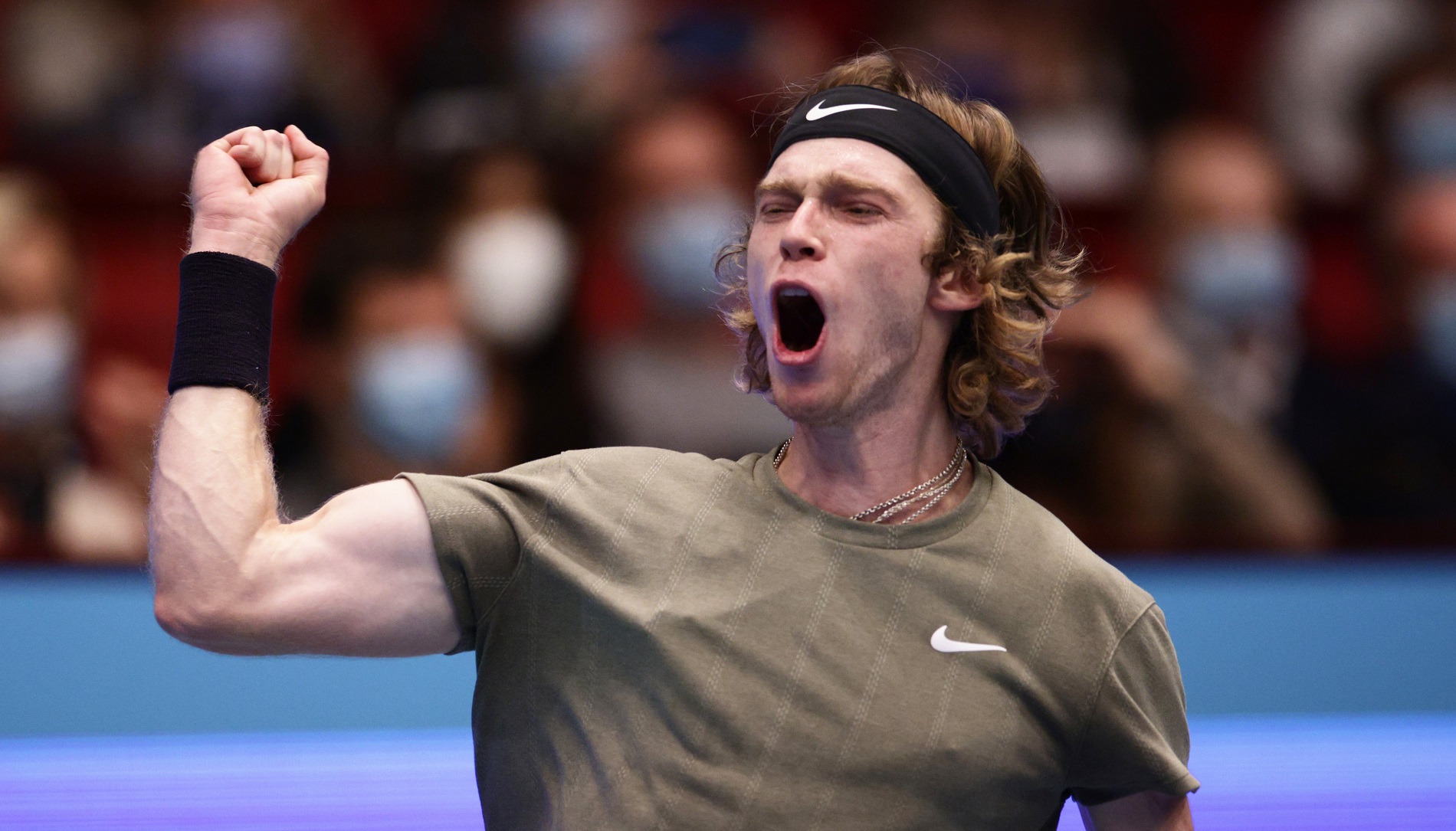 Midway through this year’s French Open, Russian Andrey Rublev ducked out of Roland-Garros, headed for his hotel, two racquets in hand, casually strolling along the Paris streets as he headed for his hotel. Though the hordes of people usually found at Roland-Garros had stayed away because of the coronavirus restrictions, it seemed to fit Rublev’s stature in the game, the Russian relatively unknown despite his lofty ranking.

But things are beginning to change for the 23-year-old, who goes into this week’s Nitto ATP Finals with five titles to his name in 2020, a feat matched only by world No 1 Novak Djokovic. With every success, his face is becoming a little better known and he likes it.

“I would like to be famous, yes,” he told Tennis Majors. “But I don’t know. I’m really calm in a way, like, to be alone or something, I don’t like to have many people around me – I like to have close people around me. But if you tell me in a way, to be famous, yeah, I would like it, because in the end, it is better for myself. More people will support me, more people will come to my matches. So in the end, if I want to be a better sportsman, to be more famous, that’s also part of it. Yeah, true. So in the end, if I would not, then I have to go out to do another job.”

Rublev has been doing his job rather well in 2020. Starting with victories in Doha and Adelaide, he won Hamburg, St Petersburg and Vienna after the five-month coronavirus break, while he also made the quarter-finals at the US Open and Roland-Garros.

The Russian has become one of the most popular players on the Tour, perhaps because he wears his heart on his sleeve. If you want to know how he’s feeling, it’s pretty easy to work it out just by looking at his face. Intense on the court, he can go crazy but he can also be patient, happy to rally for ever, tempting his opponent to try to break the rhythm. As Andy Murray told Gael Monfils in their recent Twitch discussion: “He’s got great intensity. He loves the game. He had a brilliant year and I think he will like the conditions in London so it will be interesting to see how he gets on there.”

The balance between intensity and patience is a work in progress.

“I would say I’m really patient in normal life,” Rublev said. “So it’s really tough to get me mad or angry in life. But I don’t really sometimes have patience in some games that you need to do everything slow, really careful there, it maybe starts to stress me, because I’m not really enjoying and then I prefer to stop than to keep going because I’m not enjoying this. And then, you know, I don’t really have a patience. If they give me a goal or tell me to do something I need to do, like a deal or something, OK, yes, I will have patience and I will do it carefully, like, I don’t know, like a typical puzzle or something. But to do it by myself, I’m stressing more than enjoying.”

At times, watching Rublev play is like watching speed chess, a tactical battle played at pace. It’s a cliche to say that all Russian people must like chess, but in Rublev’s case, it’s true.

“Chess I love a lot,” he said. “Of course if I play one guy who is thinking 10 minutes on every move then I’m just not enjoying because for me it takes maybe a couple of minutes maximum. In the beginning, not even a couple of minutes, but then if the game is really tight, yes, I can think for a while. But if the guy, every move is 10 minutes, in one moment I want to say stop. But I really love chess.” 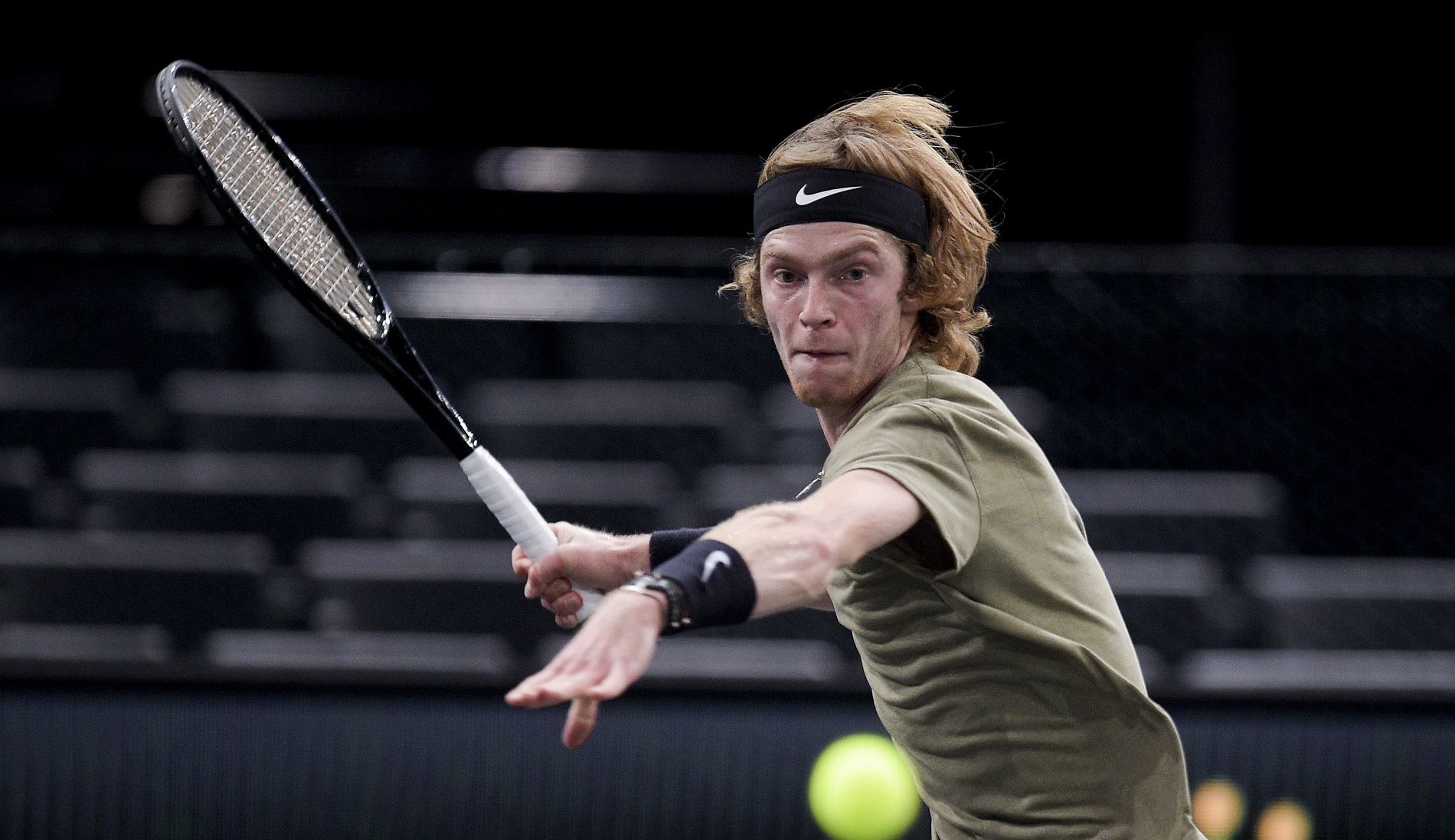 A match between Rublev and Medvedev, as happened in the quarter-finals at the US Open, will have numerous lung-busting rallies, with each man as patient as the other. On the chess board between the two, though, it’s a different story.

“No, in chess (Medvedev) doesn’t have enough patience,” he said. “Because in the end there it is different because there you put this patience into thinking. When the guys think, you are thinking or you try to find a solution, how what you can do, so in then the time goes fast.”

Rublev’s stellar year on the court was sadly interrupted by the death of his beloved grandmother, something he learned of immediately after his defeat by Stefanos Tsitsipas at Roland-Garros. Winning the title in St Petersburg shortly after was, he said, the most emotional victory of his career.

“She was one of the most important (people in his life) because I was living with my grandma and grandpa for many years,” he said. “The school where I was going, it was just in front of the apartment of my grandma and grandpa. My parents, they were working all day and they didn’t have a school near their apartment. So my grandma and grandpa were taking care of me. My grandpa always was driving me to the tennis practice with my mom. Then she would drive me back home and grandma was already waiting there with the food, always cooking for me, helping me with her homework. So basically she was doing…all, until I was 15, 16. She was taking the main part, cooking, checking my homework, doing homework with me, all this stuff. So yes, she was one of the closest persons to me.”

Rublev said his grandmother was more concerned with his school work than his tennis.

“Of course, she was following my results, but she was not really the one who was supporting tennis,” he said. “Sometimes she was even more happy if I have a good mark in school – I didn’t care at all about school, I was not even trying to give one percent of my effort in school. And my grandma would be sometimes disappointed that I’m bringing not really good marks and that I am caring about tennis. It looks like sometimes, she was not really believing (he could be a tennis player). And that’s why she was, you know, sometimes a little bit more focused about school.” 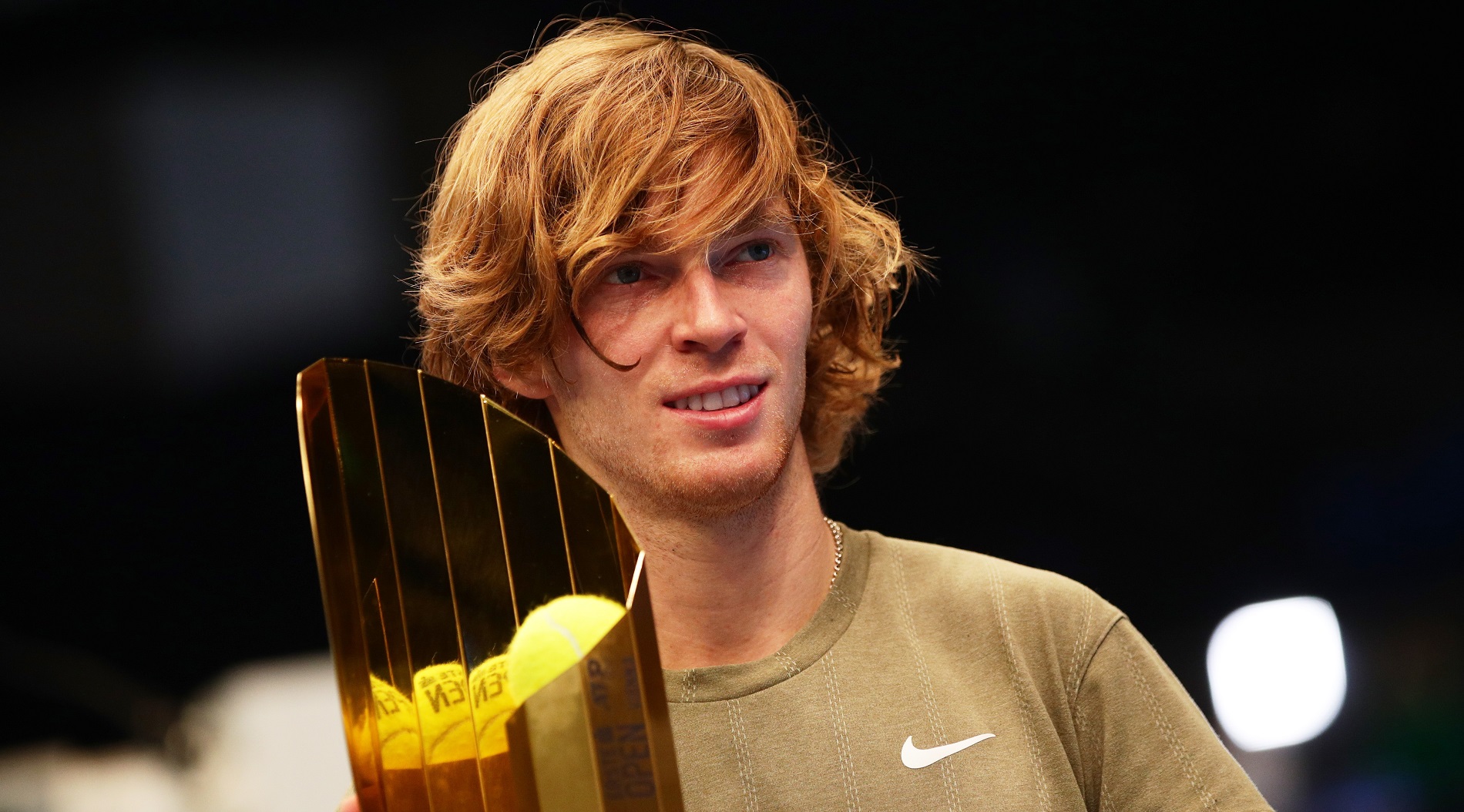 These are heady days for Russian men’s tennis, with Rublev and Medvedev making up a quarter of the field for this year’s ATP Finals. Together with Karen Khachanov, there are three Russian men in the world’s top 20 and all three have been ranked inside the top 10 at one time or other. The three have known each other since they were children and inspire each other.

“In my case it is not even about Daniil or Karen, because there’s so many young guys, so many players my age, with whom I was playing juniors and they were doing better than me or they were doing worse than me, and then sometimes when they were winning matches or tournaments, you’re thinking, wow, I was playing with this guy and now he is winning there so it means that I also have a chance,” Rublev said. “So I just need to believe more in myself and to work more and we’ll see what is going to happen. So it’s not only about Daniil or Karen, I think it’s in general where all of the guys of our generation were pushing each other.”

Rublev begins his title bid with a clash against world No 2 Rafael Nadal and is hoping for a good week, even if he is not sure yet he really belongs in this kind of elite company. But his mind is already looking ahead to 2021.

“The main goal for 2021 is to improve the things that I need to improve,” he said. “For example, I don’t know how many weeks I will have to practice. So let’s say with four weeks, it is to use this four weeks, as maximum as I can to improve as many things as I can, especially the most important ones, like physical-wise, mental-wise. So this is the main goal.”